NEW YORK -- It seemed fitting that Min Jin Lee, the South Korea born, Ivy League educated author of the recently published novel "Pachinko," would choose the curious tastes of Cuban-Chinese food for a chat over lunch in Manhattan. She knew exactly what she wanted from the menu, mixing aromatic Chinese dishes with Cuban fried plantain bananas. Born in South Korea and now based in New York, Korean-American writer MJL, pictured here in central Tokyo, is equally at home in Asia and the West. (Photo by Kerry Raftis for KEYSHOTS.COM)

Having moved to New York from Seoul with her family as a child, Lee has endeavored in her writing to provide a voice for Asian immigrants. "Pachinko," her second novel, follows four generations of Koreans as they leave their homeland in the Japanese occupied Korean Empire to settle in Japan in the early 1900s.

The story, which could be called a love letter to Korean women, describes the family's displacement, and its economic and emotional struggles to survive, in such authentic terms that it elicits deep empathy from the reader.

"Pachinko" begins with the line: "History has failed us, but no matter." In fact, it does matter to Lee. "Asians have not been good at talking about themselves," she said. "Especially women do not write about their history. My purpose in writing the book was to portray the endurance of Koreans who emigrated to Japan in the 20th century."

The epic tale spans eight decades, from 1910 to 1989. It begins in the dirt-poor fishing village of Yeongdo, in what is now South Korea, with an arranged marriage between Hoonie, a humble disabled man, and Yangin, the child of a struggling widower with only female offspring. Their daughter Sunja propels the story to a Korean ghetto in Japan.

There, after falling pregnant by her dashing and married lover Hansu, the naive teenager agrees to marry a frail minister bound for a church in Osaka. The subsequent births of children, the family's struggle with profound poverty, tragic death and brutal discrimination from ethnic Japanese form the basis of a story that remains heartening as its author finds light in the darkest of places.

"I wanted to look at the sacrifices and resilience in Korean women, and show that their kind of strength is in essence real beauty," Lee said of the novel. She writes of Sunja leaving Korea: "Sunja held her bundles close to her heart and belly to inhale the lingering scent of home on the fabric covering their possessions."

The things lost in migration concern Lee. "The cost of migration is painful because we know that we can't ever get our homes back," she said. "There are 65 million refugees in the world at this moment in search of home and rest, and I wanted to present what is always lost."

"First-generation women, the matriarchs who made the journey, who worked in the markets, who raised their kids and who endured hardships are largely invisible," said Lee. "The world doesn't see them, especially Asian women. They are minor characters in history. In the market, it doesn't matter how you look. I'm concerned that the time spent by Asian women on physical beauty today is awful.

"They feel that if you are beautiful you can bypass suffering. They don't see that history tells us that suffering is an inevitable part of life, and the women who came before them were beautiful. In Korea, and sometimes in Japan, the emphasis on beauty comes from a history of suffering, humiliation, oppression and degradation from being Korean. I wanted to sing a song for those girls. Not the beautiful girls, the 'OK girls'. The women who endured."

Some time after that conversation, I attended a talk by Lee at the New York Public Library. She stepped on stage like a rock star and proudly introduced her parents and sister, who were in the audience, taking special care to acknowledge them publicly before she shared her family story. 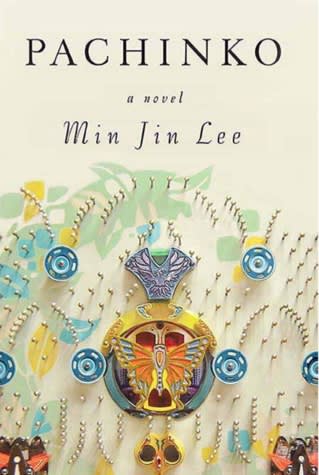 The cover of the U.S. edition of "Pachinko"

Lee was just seven years old and did not speak a word of English when she arrived in New York in 1976. Instead of trying to join difficult conversations she cultivated an inner world and a unique sense of humor. Her family settled in the far reaches of New York's Elmhurst section, in the borough of Queens, and lived a modest life. Her father opened a newspaper and candy stand in Manhattan, and Lee enthusiastically accompanied her parents on weekends because she would be given most of the damaged candy as a reward.

Before a packed house at the library Lee recounted a time when she watched as a customer flung a few coins directly at her father in payment for a newspaper. She knew this would never happen in Korea, and suddenly realized how much her father had sacrificed to take care of his family.

He wore a suit to work every day, even after her parents began a wholesale jewelry business selling cheap items to jewelry peddlers. "He wore that suit because that was what he had done in Korea. He was a marketing executive at a cosmetics company. He didn't see himself as changed," Lee said wistfully.

Lee knows about grit and perseverance. Gaining entry to Yale University and then to Georgetown University was part of the American dream, but her aspiration to write remained secondary to the study of law. As a student she wrote several pieces and won awards in both non-fiction and fiction before she began practicing corporate law at a Manhattan firm.

Finally, a chronic childhood disease forced her to abandon law and brought her closer to considering the possibilities of a literary career. "After the birth of our son and accepting family monetary obligations I began to realize it was not a financially prudent idea to be a fiction writer," she wrote after her first novel, "Free Food for Millionaires," was published in 2007.

That book followed 12 years of self-doubt, and a serious struggle to overcome the feeling that she had become a 30-year-old housewife dabbling with writing ambitions. "Lost in a world that didn't need my work," as she described the years after practicing law.

The catalyst in turning her struggles around came in the form of an artist fellowship from the New York Foundation for the Arts. She became her own teacher and critic, transcending her recurring and debilitating liver disease, raising her son, reading voraciously and attending every bargain writing course she could find. In the summer of 2006, when she was 37, she sold her first manuscript.

"Free Food for Millionaires" was a critical and financial success. When asked if this affected her Lee replied: "I do not get involved in criticism or praise." She had written several drafts of "Pachinko" before her debut, and the discarded work continued to haunt her. "I wrote so many versions of 'Pachinko' that I was full of doubt for literally decades," Lee recalled. "After 'Free Food for Millionaires' I decided to throw away the map and start over again on 'Pachinko.' "You have to write about what calls to you." "Feeling unseen in my own life inspired me to want my characters to be seen for who they are," she noted. When her Japanese-American husband gained a senior job at a Western investment bank in Japan, Lee was able to use the years 2007 to 2011 in Tokyo to interview Japanese-Koreans and collect the multitude of stories that ultimately became the narrative of her second novel. "When I finally finished 'Pachinko' I felt really free," said Lee. She chose the title "Pachinko" because it represents a thread she found amongst most Japanese-Koreans.

"I chose to name the book 'Pachinko' because it is a Japanese form of pinball, but it's a rigged game. The house is going to win and yet people still play. The multibillion-dollar pachinko business is often viewed with great suspicion and contempt by middle-class Japanese," Lee said.

"However, one out of every 11 Japanese adults plays pachinko regularly, and there is at least one pachinko parlor in every train station and shopping street in Japan. Nearly every Korean-Japanese person I met in Japan had some historical connection or social connection with the pachinko business. Pachinko is a game of chance and manipulation, and I was interested in this gambling business as a metaphor. The world is an unfair place, and yet we continue to play and we continue to show up. We have to."

When asked by a woman in the public library audience which character in her novel she most identifies with, the author answered quickly: "Hansu! Although he's morally ambiguous, which I'm not, he's a sexy guy who wants to make things happen. He's one of those people who do stuff." Clearly, Lee is also a "do stuff" person.

"Free Food for Millionaires," about Koreans in the U.S., and "Pachinko," about Koreans in Japan, will eventually form part of a trilogy. Lee's next book concerns the overvaluation of education among Korean communities around the world.

Underpinning her view of the vast Korean diaspora, meanwhile, are deep-seated concerns about migration and refugee flows."I hope that we can all respond compassionately to welcome refugees and to help their assimilation and integration into our respective economies. I think our hearts have to be open to those who seem different than we are, and perhaps open to those we may even fear. For this purpose -- this purpose of opening hearts -- I think art and drama are in a unique position and may help in a different way," she said.