CARDAMOM NATIONAL PARK, Cambodia -- "It used to be good enough to design a hotel that was nicer than one's home," says Bill Bensley, Asia's best-known luxury hotel designer. "Now we need to zip line guests into the Landing Zone Bar and save the world in the process for anyone to even bat an eyelash, never mind book a room."

Bensley, 60, has done precisely that with his most recent project, Shinta Mani Wild, a super-high-end luxury tent resort in the Cardamom Mountains in southwest Cambodia, an endangered biodiversity hot spot, which aims to show how luxury tourism can help to preserve the world's remaining pristine environments while aiding local development.

Getting there is half the fun, they say, but the nearly five-hour, 120 km drive from Phnom Penh along Route 4 is excruciatingly slow. Long stretches of special economic zones, garment factories and dusty slums, often clogged by fume-belching grid-logged traffic, give wealthy travelers heading to Wild a sobering dose of development reality on their way to paradise. For those who want to save time, an hourlong helicopter ride is a snip at $3,200 one-way from Phnom Penh.

Once off the main road, the contrast is as jarring as it is uplifting. Wedged in a 350-hectare valley between the Southern Cardamom, Kirirom and Bokor national parks, along the edge of the Thmor Roung River, Wild is a haven of mesmerizing tranquility. Guests who have both the courage to zip line 380 meters across the Raging Big Sister Falls and the means to pay $2,400 a night are in for a one-of-a-kind staycation experience.

Wild, opened in December 2018, features 15 huge tents, each constructed at a cost of around $1 million, which rise regally out of the jungle on wooden platforms. There are no buggies, no TVs, no single-use plastic. Instead, guests are served a healthy menu, and can wander labyrinthine paths over crystal clear streams, take part in nature-oriented activities, bathe in the resort's quirky pool, or peruse hundreds of old books and idiosyncratic objets d'art. Top: The Landing Zone Bar. Bottom: One of the hotel's luxury tents. (Photos by Tom Vater)

"We want our guests to imagine how one traveled in royal style in the Cambodian jungle," said Sangjay Choegyal, Wild's general manager. "Bill looks at the big picture and the detail, all in a single frame. Everything has to match. He wants to tell a story through each space."

Bensley, an American born to British parents, manages a team of 140 designers and artists based in Bangkok and Bali, and has created the blueprints for some 200 hotels in the region since arriving in 1984 after studying landscape architecture at Harvard University.

By the mid-1990s Bensley had moved from landscaping to designing entire hotels. But it was working on the Four Seasons Tented Camp Golden Triangle in northern Thailand, opened in 2005, that moved his focus to the idea of minimal intervention. 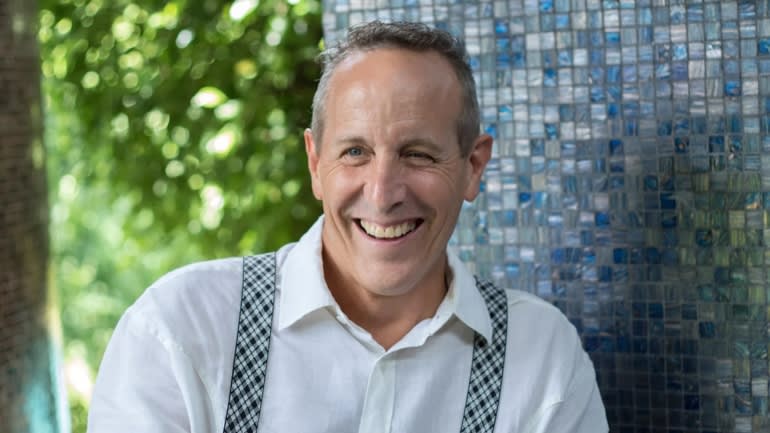 "It was voted the world's best hotel for three years in a row by Conde Nast Traveller magazine," Bensley says. "It was the first time Asia saw an 'African safari'-style camp, with impeccable Thai service, and we got elephants off the streets and gave them a new life in the mountains."

Since then, Bensley has aimed to harmonize tourism with the natural world. "We as landscape architects think that we can create paradise, but compared to what Mother Nature created we can only make it worse. That's why I'm really into developing properties with a small environmental footprint and a sensitivity towards local communities," Bensley says. "But," he admits, "I also like building a great palace."

Bensley gained his first chance to do that in the late 1990s in Siem Reap, Cambodia, when he was commissioned to design the Hotel de la Paix, now the Park Hyatt, in partnership with Sokoun Chanpreda, managing director of Hospitality Management and Development Asia and owner of Shinta Mani Hotels. 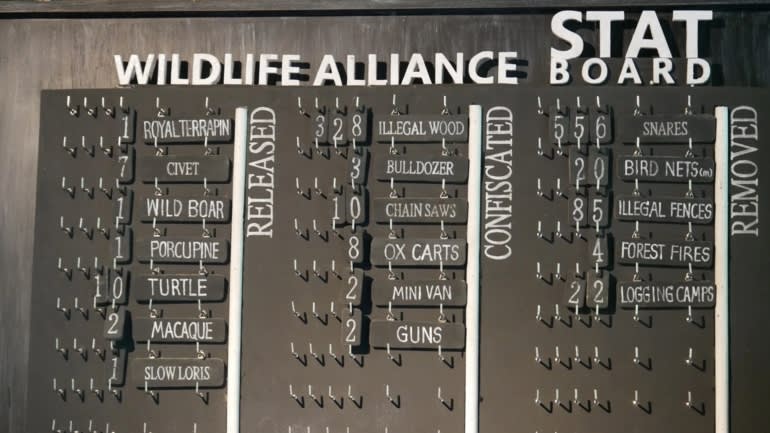 Top: Yeurn Von of Wildlife Alliance shows how poachers lay traps in the forests around the hotel. Guests are welcome to join Wildlife Alliance and several military police rangers on their daily patrols. Bottom: A record of removed traps, impounded logging equipment and rescued animals at Wild's headquarters. (Photos by Laure Siegel)

"In 2004 we started a foundation because there was a lack of skilled workers available in the hotel industry," Bensley explains. "Siem Reap was just beginning to be a tourism powerhouse. We put a school in what was then the Shinta Mani Guest House. The first year we offered 30 places [and] 4,000 kids applied. We gave them plastic bags and told them to pick up garbage; 1,000 immediately dropped out."

Since then, some 300 students have graduated from the school. The Shinta Mani Foundation, which is largely funded by donations, also provides water pumps and microloans to local people, and flies in dentists several times a year from around the world to treat villagers around Siem Reap. "In 2017 we took in $233,000 in direct donations -- from the hotel owners, from hotel guests and from partners of the foundation," says Brad Akins, the Shinta Mani Foundation director.

While the foundation focuses on humanitarian efforts, the revenues generated by Shinta Mani Wild go toward environmental protection. In 2009, Bensley and Chanpreda bought a 99-year lease on 4.5 sq. km of forest under the Cambodian government's economic land concession scheme, which is intended to promote development. 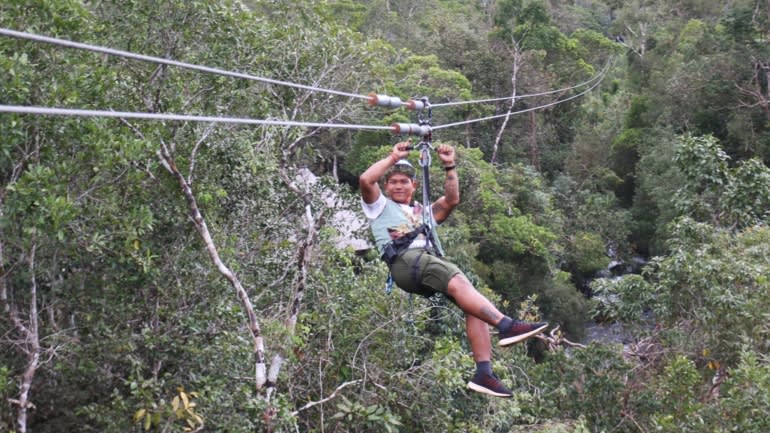 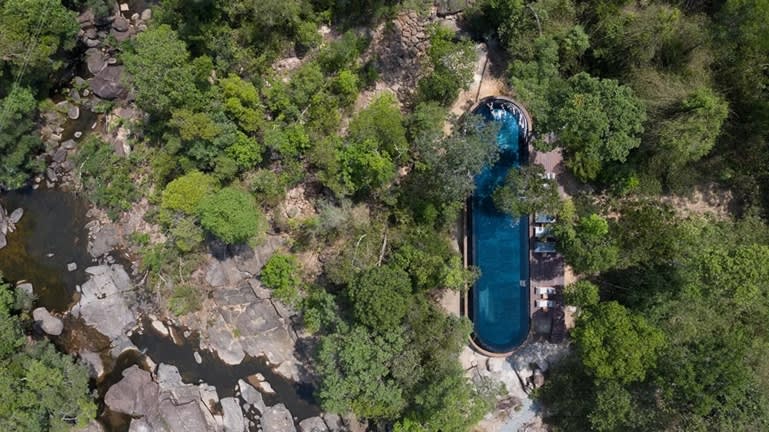 "The Cardamoms were forestry land," says Choegyal. "Rich people, military and land speculators were trying to clear it. They would pay off local commune chiefs and get villagers to cut the forest, plant watermelons and fence up the land. The speculators then sold the land to investors."

From 2003 to 2015, the Cambodian government granted economic land concessions covering more than 22,000 sq. km to private companies -- some inside protected forests -- leading to one of the world's fastest rates of deforestation and to land disputes that have affected the lives of 500,000 people, according to Licadho, a Cambodian nongovernmental organization that campaigns for human rights.

When the government required Bensley and Chanpreda to use their land for economic development, they came up with an eco-resort concept in partnership with Wildlife Alliance, a U.S./Cambodian nonprofit wildlife and forest conservation organization that had campaigned successfully for the Southern Cardamoms to be declared a national park in 2016. 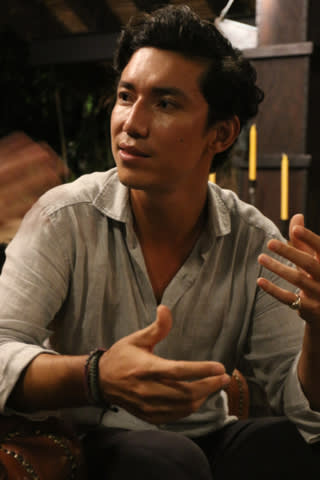 Since then, Wildlife Alliance has been involved in releasing endangered species into the wild, destroying traps and logging camps, and running education programs. A team of military police, rangers from the Ministry of Environment and members of Wildlife Alliance patrols the park every day.

Preserving the primary forest remains a formidable challenge, however. "Camera traps have been smashed and stolen. We have caught hunting dogs. A logging gang started to build a road through the national park so our team watched them for three days, then stormed the camp and arrested 20 people. The following day, everyone was freed, but at least the road was not built," Choegyal says.

"At the moment, NGOs and private businesses are the only way to protect the park," he says, adding that no trees were removed during the construction process at Shinta Mani Wild, while money raised at the resort will help to pay for more ranger patrol stations.

"We allocate $100,000 a year for conservation and education; we train local youth for hospitality jobs, we pay the rangers, we teach waste management and provide English lessons to the community," Choegyal says. "We are looking at new technology, like drones, to cover more of the surface area."

Bensley, whose designs pose overdue questions on how resorts for the world's elite impact the environment, says he is working on a white paper on building standards to be sent to the top 325 hotel companies in the world.

"It summarizes what I have learned in the past 36 years about constructing hotels with purpose and as sustainable as possible," he says. "I want them to add my suggestions to their building practices.

"A hotel does not have to be in an environmentally sensitive place to be built with such purpose. It could be a casino in Singapore."