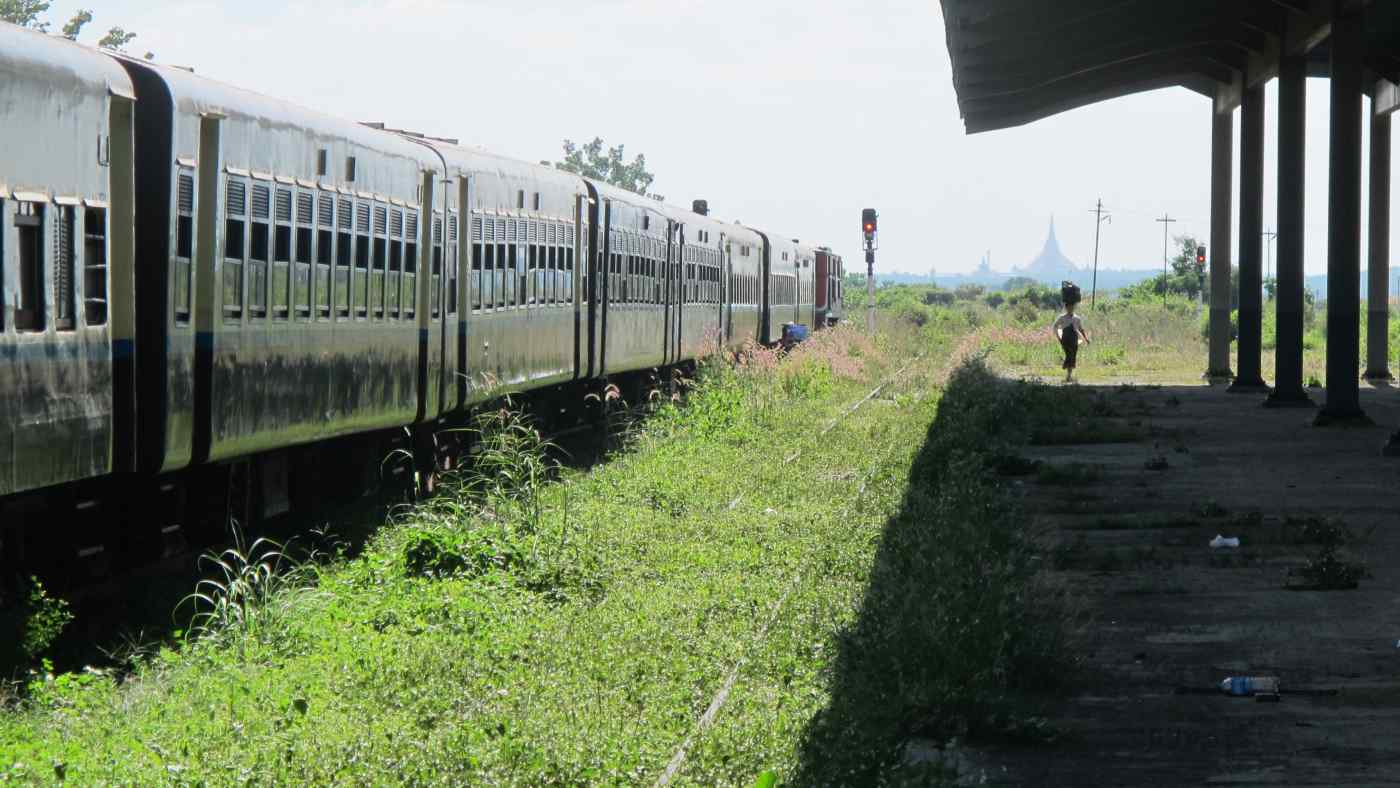 YANGON -- The train from Yangon to Mandalay takes a grueling 15 hours -- a slow, hot, dusty ride through flat Myanmar countryside that costs $1 for an Upper Class seat.

Air-conditioned buses plying the same route are quicker and more comfortable, but the train is popular because it is cheaper, safer and more fun; passengers are mobbed at every station by vendors hawking ice-cold bottles of water, fruit, confectionery and spicy curry dishes. And with so much time on their hands travelers inevitably end up chatting with their neighbors.

For decades, this is what it has been like to travel by train in much of Southeast Asia, where narrow 1,000 mm gauge (meter gauge) track is the norm -- much of it poorly equipped and badly maintained.

In recent years, there has been growing excitement about the possible extension to the region of China's sprawling railway network, which uses the global standard 1,435 mm track gauge, allowing faster and bigger trains. An initial project, designed for trains running at up to 160 kph, is expected to open in December 2021, linking Kunming in China's Yunnan Province with Vientiane in Laos at a cost of almost $6 billion, 30% of which is to be financed by Laos. There is also talk of building new lines for high-speed trains like those operating in China, Europe and Japan, which typically travel at speeds of 250 kph or more.

As the airline industry worldwide reels from the collapse of air travel amid the coronavirus pandemic, rail transport is beginning to look more attractive, although building new lines takes money and time, as regional governments well know. 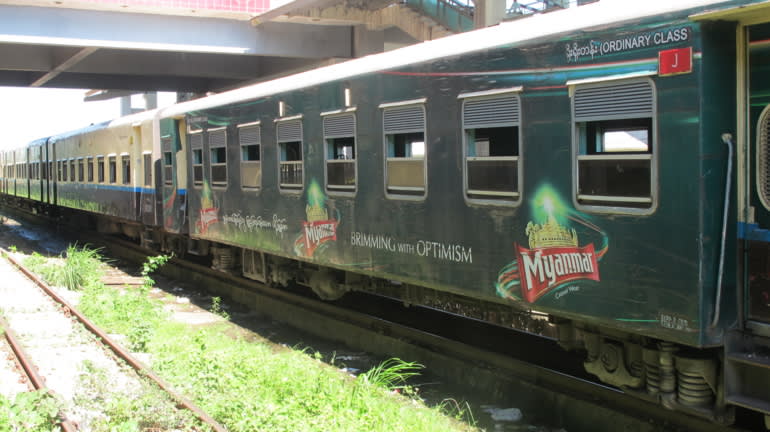 However, there is a cheaper, albeit old-fashioned, alternative. Several Southeast Asian governments have begun rehabilitating the old meter gauge railways, many laid down by European colonial powers, which link much of the region. With modern rolling stock and signaling systems, these lines can accommodate trains running at up to 120 kph, though few trains are currently able to reach such speeds.

"The rail network in Southeast Asia was always dominated by the meter gauge, and it's easier and cheaper to rehabilitate the existing lines than to develop a new high-speed rail network," said Ruth Banomyong, head of the Logistics and Transport Department at Thammasat University Business School, in Bangkok. "High-speed is too expensive, no one trusts the Chinese -- and is high-speed needed in these countries?" said Ruth.

One of the tracks being rehabilitated is the meter-gauge Yangon-Mandalay line, financed by 263 billion yen ($2.4 billion) in loans from the Japan International Cooperation Agency, a Japanese government aid organization, and a Myanmar government contribution of 57 million yen. Myanma Railways has been working since 2017 on phase one of the project, renovating a 260 km section between Yangon and Taungoo, 220 km north of the former capital, with engineering and signaling equipment installation organized by Japanese contractors while labor, cement sleepers for the renovated tracks and new embankments are provided by MR. Work gangs stand to attention and wave in unison at passing trains with Japanese-inspired job enthusiasm. The Yangon-Taungoo renovation should be finished by 2023, cutting the ride time from Yangon via Taungoo to Naypyitaw, the capital, from 12 hours to about 4.5 hours. When phase two is completed, covering 360 km of track from Taungoo to Mandalay, the Yangon-Mandalay trip will take eight hours, compared with 15 hours now. Passenger aircraft cover the distance in about an hour, but a one-way flight costs about $100, giving the railway a significant cost advantage even if the ticket prices on the renovated line rise sharply.

MR is also planning to start work next year on renovating the 226 km Yangon-Pyay line, the oldest railway route in Myanmar to the once-thriving rural center north of Yangon, which was built by the British colonial government in 1877. The project will be financed by a loan from the Asian Development Bank. But both the Yangon-Mandalay and Yangon-Pyay projects cover only a small fraction of the country's 6,072 km meter-gauge network, about half of which was built by military-led governments fighting provincial separatist insurgencies, and is relatively new.

"Before 1988 we had only 3,000 km [of line]," said Aung Win, general manager of MR's Technical Department. "Within 30 years we doubled our railway network ... but most of the new lines could not provide proper railway services and are of very poor standard." 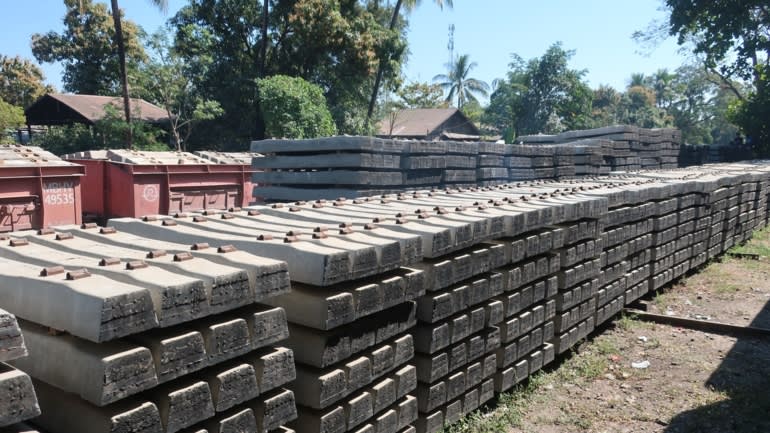 Many lines are no longer commercially viable. But the network also includes more remote routes that appeal to "adventure travel" visitors and in the government's view, have significant tourism potential. These include the scenic route from Hsipaw in Shan State to the old British hill station of Pyin Oo Lwin route, the line from Thazi through the jungle to Shwe Nyaung, and the trip from the Kalaw colonial hill station to Heho in Shan State, according to travel expert Edein Briels, managing director of the Myanmar branch of Thailand's Khiri Travel.

MR's counterpart in neighboring Thailand, the State Railway of Thailand, has accumulated losses of more than 100 billion baht ($3.1 billion) operating a similarly over-extended meter gauge network of 4,000 km, most of which is single track. However, the government has embarked on an aggressive rehabilitation plan.

In early 2018, SRT approved seven contracts worth about $4 billion to dual 933 km of track, mostly on routes within 250 km of Bangkok. The project aims to create a competitive commuter train service that can feed into the Thai capital's expanding mass rail transit system. SRT also plans to electrify the feeder network, and a new European-standard signaling system is being installed that should enhance safety standards and further speed up trains. The emerging dual track system has allowed SRT to start thinking about marketing its service, which has been in decline for nearly four decades. "Before this we could not think about marketing because we did not have the double track project," said SRT Deputy Gov. Voravuth Mala. "The Hua Hin (beach resort) dual track, for example, will be completed next year, so you will be able to go to Hua Hin from Bangkok in less than three hours. That will be a new market for us," he said, reinvigorating competition between trains and airlines. 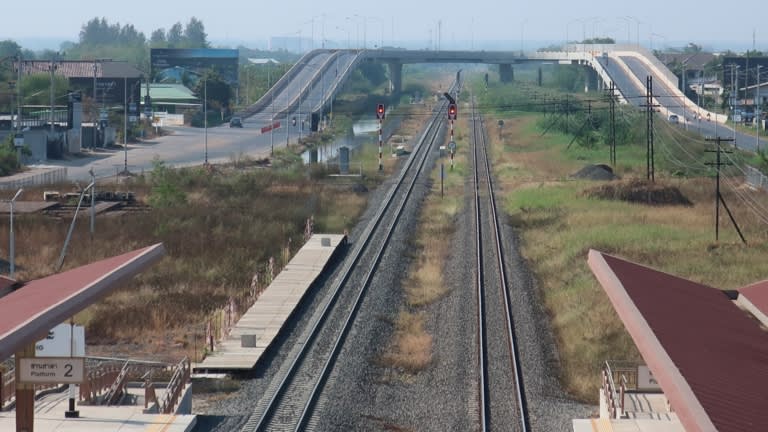 "In the old days we used to do well with the overnight trains, but low-cost airlines have killed it," Voravuth said, adding that faster railway services would have an advantage over airlines in key segments of the market. "Old people like to travel by train. They don't want to go to the airport at 5 a.m. to check in," he said. In Thailand's greying society this will be a growing market, he hopes.

The COVID-19 outbreak will also underpin the case for renovating meter-gauge track if it causes long-term damage to Southeast Asian economies, reducing economic growth rates and entrenching demand for inexpensive passenger transport services. "That is coming," said Ruth. "The public service aspect of the railways will have to be reinforced."

However, renovated meter-gauge railways also have significant potential in the freight market. In Cambodia, the privately owned Royal Railway reopened the 256 km single track Phnom Penh to Sihanoukville route in 2015, chiefly to carry freight to the capital's port on the Mekong River. The emergence of an alternative to road transport helped to cut Cambodia's freight transport rates by 8% in 2016, according to John Guiry, CEO of Royal Railway, which is owned by the Phnom Penh-based Royal Group, the country's largest diversified conglomerate. On July 4, 2018, the 385 km route between Phnom Penh and Poipet, on the Thai-Cambodian border, was also officially reopened after a gap of nearly 45 years since the Khmer Rouge takeover of Cambodia in 1975. Passenger services are provided on both reopened routes.

Despite a dearth of global media attention, the resurrection of meter-gauge railways is a positive development for both freight transport companies and travelers in Southeast Asia -- especially poorer people needing cheap and reliable transport. The rail renaissance is also helping Southeast Asian governments in the fight against climate change, since trains typically create significantly less pollution than trucks or airplanes.

For all these reasons, the prospects for further renovation remain strong -- and each successful project reinforces the case for others. "I am sure that 10 years from now things will be better for railways in the region," said Ruth. "However, the pace might be too slow for people to notice."