Gurez, the Kashmir valley at the top of the world

Learning to savor solitude without loneliness 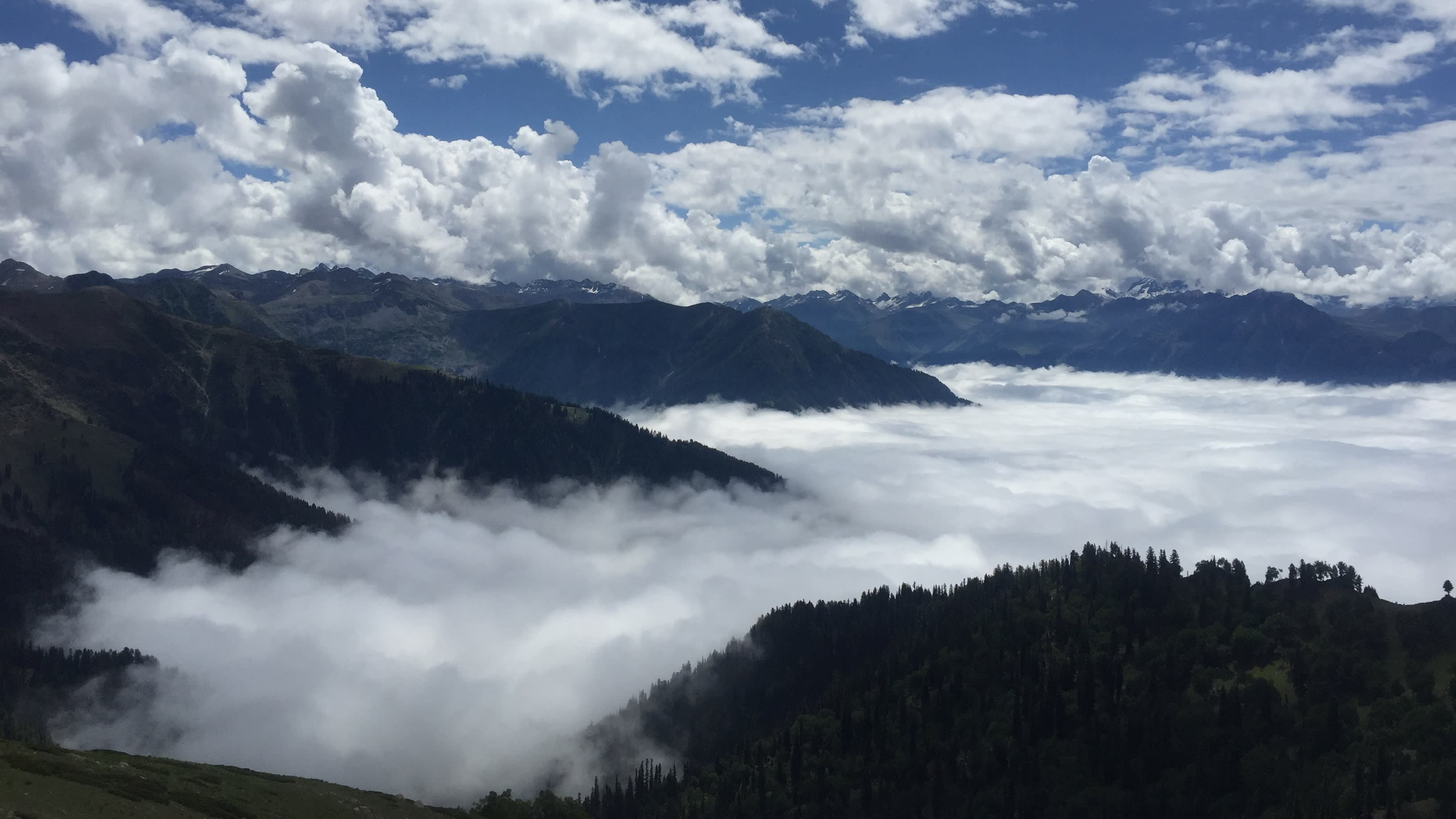 The Gurez Valley, viewed from the top of Razdan Pass. Located high in the Himalayas about 2,400 meters above sea level, the valley is cut off from November through April. (Photo by Safina Nabi)
SAFINA NABI, Contributing writerOctober 14, 2020 09:00 JST | India
CopyCopied

GUREZ, India -- For the five years that I lived in Delhi, I was always enchanted by the idea of travel.

Sitting on the terrace at my friend Jayashree's place one afternoon in the summer of 2019, we discussed where we could go. Jayashree's first suggestion was to visit some mountainous place in my home state of Kashmir, but I wasn't so keen. Kashmir is full of mountains, is surrounded by them in fact, so why would I want to see more?

I pleaded with Jayashree to tour somewhere else, a coastal area perhaps, but she was adamant about going hiking somewhere green. Over the next few days, my brain mapped the places I wanted to go, but I couldn't decide. I ended booking a ticket back to Kashmir to spend a few lovely days with my mother. Still, the thought of adventure travel lingered in my imagination. After Googling secluded places in Kashmir, one place kept popping up: the valley of Gurez.

Growing up in Kashmir, I had heard so many tales of this famous gateway to Central Asia's silk route. Located high in the Himalayas about 2,400 meters above sea level, I suddenly felt eager to explore it. My heart set and my mind made up, I checked off a list of what I needed to get to this remote valley. Packing my bags the next day, I waved goodbye to my mother and began my journey.

First stop, Srinagar, the largest city and the summer capital of the Indian territory of Jammu and Kashmir, where I soon found a sumo -- a local taxi that can fit up to nine people -- that took me to Bandipora in northern Kashmir. After two hours at the Bandipora bus stand, my eyes peeled for the driver who would take me onward, I heaved a huge sigh of relief when a sumo rolled up that was headed for Gurez. It is only 81 km away, so I expected to be there in just a few hours. Little did I know the state of the roads that lay ahead of me.

After cruising smoothly out of Bandipora, we soon moved onto the curvy roads leading up high. As things below got smaller, the road ahead got bumpier. So bumpy that I had to hold my head to stop it banging against the roof. Passing by a dozen iron gates and army bunkers, where at one point we were made to show our identities and register, after seven hours we finally crossed the Kishan Ganga River and entered the town of Dawar. It was 8 p.m. and pitch black. 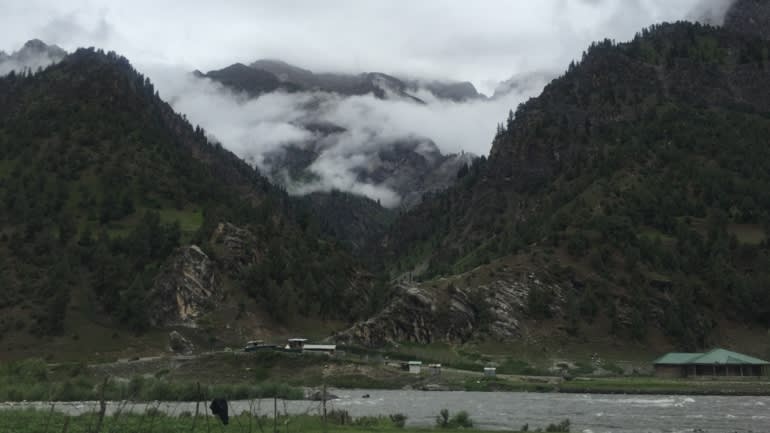 The township of Dawar, in the Gurez Valley, situated on the banks of the Kishan Ganga River. It is a place so primitive that it can feel like traveling "back in time." (Photo by Safina Nabi)

So dark that I actually could not see a thing, it was the drizzling rain that gave me a tingle of excitement. Soon enough my eyes adjusted and I was able to make out some people walking ahead, so I asked if they could help me find Circuit House. That's the local government guesthouse, situated on the banks of the Kishan Ganga River, which is the only place to stay in Gurez.

When I reached the single-story building, not wanting to disturb the two men offering the Nimaz (Salah) prayer in the garden, I quietly opened Circuit House's big iron gate and seated myself on the concrete pavement while I waited for them to finish and -- hopefully -- guide me to a room.

Rushing to greet them after they finished praying, I told them I had come all the way from Srinagar. Did they have a room? The expression on their faces told me this was not my lucky night. With a sigh, the caretaker, Ghulam Mohammad Lone, revealed that a summer rush had filled every bed.

"Before you come here you have to go to the tourist center in Srinagar and book rooms there," Mohammad said. But, as I had left home without any itinerary, where would I spend the night? Seeing the concerned expression on my face, Mohammad told me not to worry. "Come with me," he said. "I will take you to my house."

On the way over, Mohammad told me that he was a retired government employee who now took care of the guesthouse. "But most of the time, I am out of touch with the tourism department due to no connectivity."

After a long evening chatting with Mohammad and his family -- helped greatly by the hot cups of salt tea his daughters kept serving -- the morning sunshine revealed Dawar, a town where all the shops, houses and restaurants were made of large wooden planks with just the basics when it came to amenities. If it not for the packets of chips and packaged water bottles, I would have felt like I had traveled back in time.

I then set out in the morning for Tulail and Burnai, the beautiful twin villages that mark the last check before Chakwali, the line that divides India and Pakistan. Stopped three times for registration and identification checks, I felt lucky to have my cabdriver driver Imtiyaz, who knew the routes, language, and shortcuts so well. And he knew how to handle all the men in uniform.

On reaching Burnai, I took a walk around the village and was soon surrounded by young boys and girls, all eager for me to click pictures with them, another sign of how this remains a place without many of life's modern conveniences. There is no internet connection of any kind and only a few hours of electricity a day, which is supplied by generators belonging to the Border Security Force.

Life is difficult in this beautiful but harsh region, where temperatures plummet to minus 25 C in the winter. Here farming remains an activity for the entire family and is still virtually the only source of income. People grow potatoes, kidney beans, apples and corn. Everything is organic.

For six months, from November to May, Gurez is completely cut off from the world, buried under 6 meters of snow. This is what makes the valley such a tranquil and striking place to visit, but a perilous place to live. 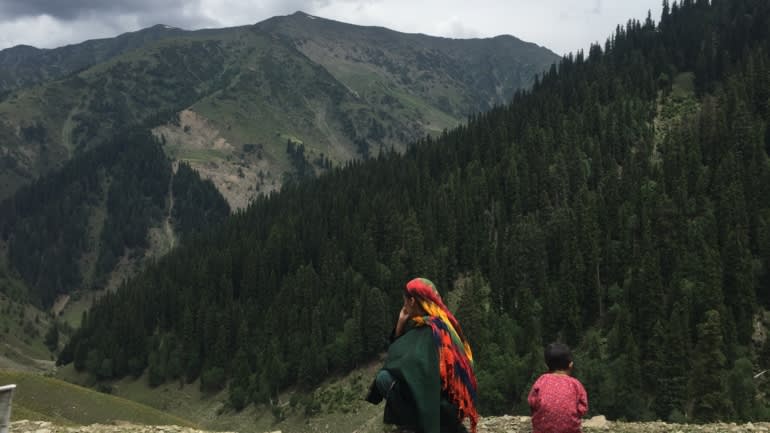 The view from Chakwali, the last stop before the line that divides India and Pakistan. Chakwali is home to around 30 households. (Photo by Safina Nabi)

From visiting the Peer Darvish, a shrine to a local Sufi saint located 3 km outside Dawar, to seeing the pyramid-shaped peak named after Kashmiri poet Habba Khatoon, to joining so many children playing cricket in the streets and singing local folk songs, I spent my days soaking up the high mountain air, the valley's lush green meadows, its gushing river and numerous streams.

Stopping at Razdan Pass on the way home, I lost myself in the clouds that, with the sun shining down from above, looked as if they were dancing on the peaks of the mountains. For people fond of remote locales and who want to enjoy a peaceful holiday without phones, crowds, and the hustle and bustle of the big city, few places on Earth can match Gurez.

Quiet and peaceful destinations are often linked to introverts, but I discovered another truth: that there are actually people who truly understand the value of solitude as well as how to properly savor it. That is what Gurez taught me -- and I am definitely one of life's extroverts.

The irony is that despite being a solo women traveler in one of the world's most desolate outposts, the warmth of the local people was so strong that not once did I feel alone.