Has India's most influential guru finally gone too far? In a video clip that went quickly viral, he branded allopathy, modern medicine, a "stupid and failed science," adding that it and not coronavirus was responsible for the deaths of hundreds of thousands of people -- India had officially seen 318,895 COVID deaths as of May 28.

The comments unleashed a storm of public recriminations. To quell the backlash, India's health minister Harsh Vardhan was forced to chide the wildly popular guru -- albeit gently -- while Ramdev himself petulantly withdrew the statement.

Still, the local wing of the Indian Medical Association, the country's umbrella organization for doctors of modern medicine, was not satisfied. It has threatened to sue him for approximately $140 million unless he completely recants in another video. So far, the guru has dug in his heels.

Courting controversy is Ramdev's style du jour. Only a few weeks ago, he said people were dying because they didn't know how to breathe.

As the pandemic raged last June, putting India under one of the world's strictest lockdowns, Ramdev gathered followers and journalists inside a festive marquee near Haridwar in the northern state of Uttarakhand to declare with great fanfare that his Patanjali Ayurved brand -- based on the traditional Hindu system of medicine -- had developed a COVID cure called Coronil, which he claimed was "clinically-controlled, trial-based, evidence-based, [and] research-based." 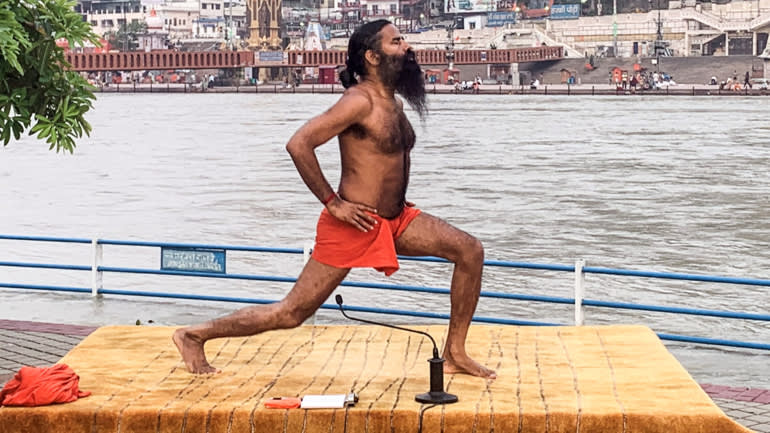 Founded in 2006, Baba Ramdev's Patanjali empire earned revenues of $1.22 billion in 2017. Momentum has stalled in recent years after a spate of controversies.   © Reuters

It took only one day for those claims to fall apart spectacularly amid allegations of fraudulent procedures. When a special constituted government task force advised within a week that Coronil was most certainly not a COVID-19 cure, rather than walk back Ramdev's claims, Patanjali instead chose to deflect, divert and obfuscate. Ramdev was conspicuously absent.

But behind the media circus was a deeper, murkier story, one all too common across India where self-styled gurus, godmen and godwomen, and spiritual healers of all shapes and sizes have long enjoyed massive followings.

In Ramdev's case, who is considered something of a maverick yoga guru even in India, Patanjali was founded in 2006 marketing everything from noodles to toothpaste. By the time Narendra Modi swept to power as leader of the Hindu-nationalist Bharatiya Janata Party in 2014, Patanjali's annual revenues were well on the way to topping $1 billion, peaking at $1.22 billion in 2017.

Hamstrung by controversy over ingredients, adulterants and questionable market practices in recent years, sales of Patanjali products have lost momentum, stagnating at around $1.16 billion in the 2018-19 financial year, with the number of stores tumbling from 4700 to 1900 last year.

A COVID-19 cure could have been a quick way to shore up both confidence and Patanjali's bottom line. Nevertheless, Ramdev's personal brand doesn't appear to have suffered -- which is unsurprising given India's unmitigated fascination with self-styled godmen and godwomen. For over a thousand years, gurus have been played a prominent role in Indian culture. Larger-than-life figures who espouse all manner of spiritual, philosophical, and religious doctrines, they are as famous today for their hundreds of millions of followers and ability to build massive financial empires.

"Spirituality in India is closely associated with religion and often equated with it," said Simantini Ghosh, assistant professor of psychology at India's Ashoka University. "But people gravitate toward such gurus for solace arising out of fear of their insecurities, and think they are giving themselves up to a higher entity for resolution or redemption."

India's brand of spiritualism first burst onto the world scene in the late 1960s when The Beatles famously visited the ashram of Maharishi Mahesh Yogi in Rishikesh. Known as the "giggling guru" owing to his penchant for loud guffaws, the Maharishi is credited with developing Transcendental Meditation, which claims to provide a path to levitation.

"There are certain businesses which yield very high return on investment. Religious space is one of them," said Harish Bijoor, a Bangalore-based brand consultant. "The business of gurus starts with brand building. The idea of brand building is to ensure that a particular brand aura is added to the aura of the individual and accentuated to a large followership which in turn can yield revenue." Bhagwan Shree Rajneesh, pictured here in 1985, and his community of followers in the Rajneeshpuram community located in the U.S. state of Oregon, were the subject of the 2018 Netflix series Wild Wild Country.   © Getty Images

In Coimbatore, in the south Indian state of Tamil Nadu, the Isha Foundation is the beating heart of Jaggi Vasudev, or Sadhguru, as he is popularly known. Suave, polished, and ever-smiling, his shock of white hair and flowing robes convey an air of benign spirituality. His preferred medium is Q&A sessions with Indian celebrities in front of huge live audiences where his witty, engaging manner helps to obscure the rougher parts of Hindu nationalist ideology.

Underlying it all is the Isha Foundation's basic credo, "Inner Engineering," which is described as being a set of "powerful tools and practices based on the science of Yoga to transform yourself into joyful, relaxed, and focused individual." Courses and workshops are attended by thousands, all for a fee of course.

"Gurudom is full of branding," said Bijoor. "It depends on the personality, the character and the charisma. Brand building is close to event management. It is a question of creating a niche and dominating that niche. Any guru you look at, branding has inevitably fallen in place. It might seem accidental, but mostly, it is by design, though nobody will talk about it because it is deemed politically incorrect. All of them use it to the hilt, but some of them go berserk and things get out of control."

Just how out of control is demonstrated by astonishingly colorful characters such as Saint Dr. Gurmeet Ram Rahim Singh Insan, founder of the Indian social group Dera Sacha Sauda. With his portly persona, garish clothes, and penchant for making Bollywood films about himself -- he gave himself 40 different credits in one feature-length film. With a net worth estimated at $42 million, Gurmeet's popularity took a hit in 2017 when he was convicted of rape. A 2019 murder conviction hasn't helped much either.

"Gurus have a placebo effect, but the downside is quite dangerous. They all have strict hierarchies and are dogmatic in their approach, so they are quite rigid," said Ghosh. "It is in the human psyche to turn to a source of perceived security and these leaders use it for financial gain. They exploit the vulnerabilities of their followers to build their empires." 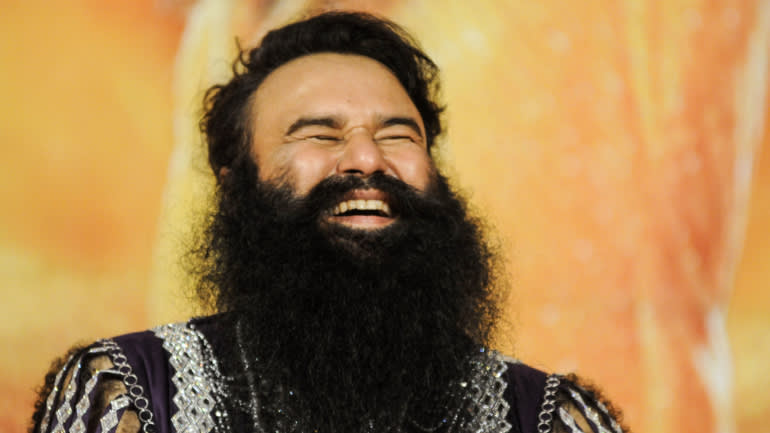 Prior to a 2017 rape conviction, Gurmeet Ram Rahim Singh Insan, also known also as MSG, was leader of the Indian social group Dera Sacha Sauda. He was also convicted of being involved in the 2002 murder of journalist Ram Chander Chhatrapati.

When it comes to scandal, Nithyananda, now known as the "absconding guru," is perhaps without peer.

Fond of deep maroon robes laden with heavy gold jewelry, and usually seen perched on a kitschy glittering throne, Nithyananda has declared that his godlike powers once enabled him to delay the sun's rise by 40 minutes, have made cows and monkeys talk in Sanskrit, and helped people to live for over 200 years.

Unfortunately, his earthly deeds finally caught up with him: slammed with charges of child abuse and rape, Nithyananda skipped the country in 2019, apparently parking himself on a Caribbean island.

"Every guru is a function of his or her action or inaction, acts of commission or omission. It is all carefully orchestrated," said Bijoor. "In real life, they are often underwhelming and completely ordinary. But they are showcased in a particular manner that drives in the money. Without it, the enterprise cannot run. That's when they lose control over the whole thing."