YANGON -- The old hymns were sung, the mournful bugle calls sounded. But a recent memorial service in Yangon's Anglican cathedral for a wartime British hero and his local comrades was as relevant to Myanmar's tragic present as to its painful past.

The foreigners and aged veterans of Myanmar's Karen ethnic minority met on Nov. 12 to commemorate the life, sacrifice and death of Maj. Hugh Paul Seagrim, an army officer executed by Japanese forces in September 1944, along with seven comrades from the Karen irregular forces who fought with him.

However, those present at the cathedral service were clearly thinking as much of Myanmar's current tensions and divisions, including the continuing plight of the Karen, the Muslim Rohingya and other ethnic minorities, as of its brutal World War II history. Patrick's words were an obvious reference to the flight from Myanmar of more than 600,000 Rohingya Muslims in what Zeid Raad Al Hussein, the United Nations High Commissioner for Human Rights, has described as a "textbook example of ethnic cleansing.''

The atrocities allegedly committed by security forces and vigilante groups against the Rohingya in Rakhine State -- murder, torture, rape, the burning of villages -- are reminiscent of decades of action by Myanmar's military against minority ethnic groups. An Indian army soldier pays his respects before a memorial at the Yangon War Cemetery where nearly 1,300 Commonwealth soldiers of World War II are buried. (Photo by Denis D. Gray)

In addition to the conflict in Rakhine State, violence continues against the Kachin and other minorities in northern Shan State, despite the advent in late 2015 of a democratically elected government led by Aung San Suu Kyi, a longtime political prisoner who is now Myanmar's State Counselor.

After the longest-running insurgency of the 20th century, a fragile cease fire exists between the government and the Karen, among whom Seagrim remains a legendary figure. "The war never really ended for us,'' is a mournful refrain of Karen WWII veterans, now mostly in their 90s. Affectionately called "Grandfather Longlegs'' because of his height, Seagrim was charismatic, deeply spiritual, a brilliant guerrilla leader and a social misfit, preferring the company of the tribal people to colonial society. When the Japanese army drove the British out of the colony then known as Burma he volunteered to stay behind to raise a Karen force that harassed the Japanese and provided intelligence to the Allies.

After torturing and executing Karen villagers, the Japanese threatened more reprisals unless Seagrim was delivered into their custody. The officer, who had forged an intense, almost mystical bond with the Karen, surrendered to prevent further suffering.

He was tried, pleading before a Japanese military court that those who surrendered with him should be freed, and that he alone should die. Smiling, singing a hymn, Seagrim, 35, and the seven Karen dug their own graves and were executed by firing squad in 1944, less than a year before the war ended.

"We hope that his dying wish for peace in the Karen hills will be with us in the near future,'' Philip Davies, author of "Lost Warriors: Seagrim and Pagani of Burma,'' told the cathedral gathering. Corporal Roy Pagani was another British soldier who fought with Seagrim and the Karen. Duncan Gilmour, who helps provide pensions for Karen, sings a hymn with 94-year-old Saw Berny, one of the aid recipients. (Photo by Denis D. Gray)

Not long after the war ended, the Karen rose up in a quest for independence from a central government dominated -- even before independence -- by Myanmar's majority Burman community. Other ethnic groups also launched insurgencies in pursuit of independence, but Burma was granted independence as a single state in 1947.

Although there was no formal agreement, British officers had promised to support the Karen after the war, and many Karen had wanted Seagrim to become their first governor in an autonomous Karen State. But the British government failed to take up the Karen cause. Animosities in postwar Burma were deepened by political divisions between the Burmans, whose leaders had initially supported the Japanese, and ethnic minorities that had sided with the British. Saw Aung Ba Win, 89, a Karen who fought with the British in World War II, attends a memorial service at the Yangon War Cemetery. (Photo by Denis D. Gray)

"The legacy of World War II is still enormous. You can see it to this day,'' said Alex Bescoby, a film director who attended the cathedral service and is completing a documentary on Help for Forgotten Allies (H4FA), a small group of British volunteers trying to right what they say was a historical wrong perpetrated by the British government.

The group, inspired by Seagrim's devotion to the Karen, is paying pensions to surviving veterans or their widows. London has always refused to do so, arguing that the Karen irregulars were not part of the British army.

Seagrim told his friends that he would return to Burma after the war to work as a missionary for the welfare of the largely impoverished Karen. But Davies speculated that had he survived, Seagrim would have found it difficult not to become their strong spokesman.

"It may well be that, had he lived, he would have acted as a voice of reason and moderation, and maybe brokered a working arrangement with Rangoon (an earlier name for Yangon),'' Davies writes in his book, referring to the seat of postwar British rule. The account ends with an eloquent plea "to heal the scars of the past and find an effective balance between tribal autonomy and national union." British historian Philip Davies talks about the life of Maj. Seagrim at Yangon’s Anglican cathedral and what it still means in today’s Myanmar. (Photo by Denis D. Gray)

Peter Mitchell, a member of H4FA whose father went to school with Seagrim, said that if the executed officer was still alive he "would be totally horrified at what was happening in Burma today.'' Mitchell said his father, who also fought in Burma, described Seagrim as "one of the few real heroes I knew.''

Perhaps the Karen still hold him in such reverence because, in the words of Karen community leader Rebecca Htin, this officer of a colonial power "towered over his men but treated them as equals.'' Many ethnic minority people in Myanmar have since come to feel that they are second class citizens.

Seagrim also stood up for the Karen, making the ultimate sacrifice, whereas the outside world failed to stop decades of suppression inflicted by the Myanmar military, and seems unwilling to intervene in the Rohingya crisis. Michael Nazir-ali, a British Anglican bishop, recently described the world's stance as "pathetic minimalism at best, apathetic inaction more often.'' 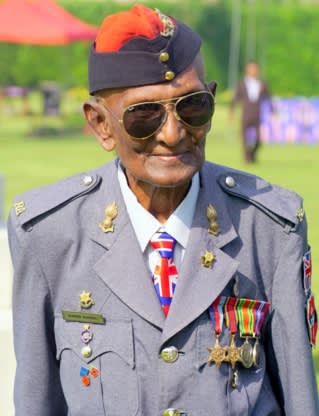 The link that drew the key participants to Yangon for the cathedral service is that so many of the participants in the war in Burma have been forgotten: Myanmar's ethnic minorities, the Karen veterans, and even the British-led Fourteenth Army, which defeated the Japanese in Burma but is forever overshadowed by the war in Europe. Seagrim is hailed in the Karen Hills but little known at home.

"Greater love hath no man than this, that a man lay down his life for his friends,'' reads an inscription on a plaque in Seagrim's memory unveiled as the cathedral ceremony ended. Under imposing Gothic arches, and with light streaming through stained glass windows, the service had begun with a prayer "for all who continue to suffer the consequences of fighting and terror.''

Standing next to the simple gray plaque, and displaying a remarkably strong voice for a 94-year-old, WWII veteran Saw Berny lifted himself from his wheelchair to sing a poignant solo hymn for Grandfather Longlegs, his onetime commander.