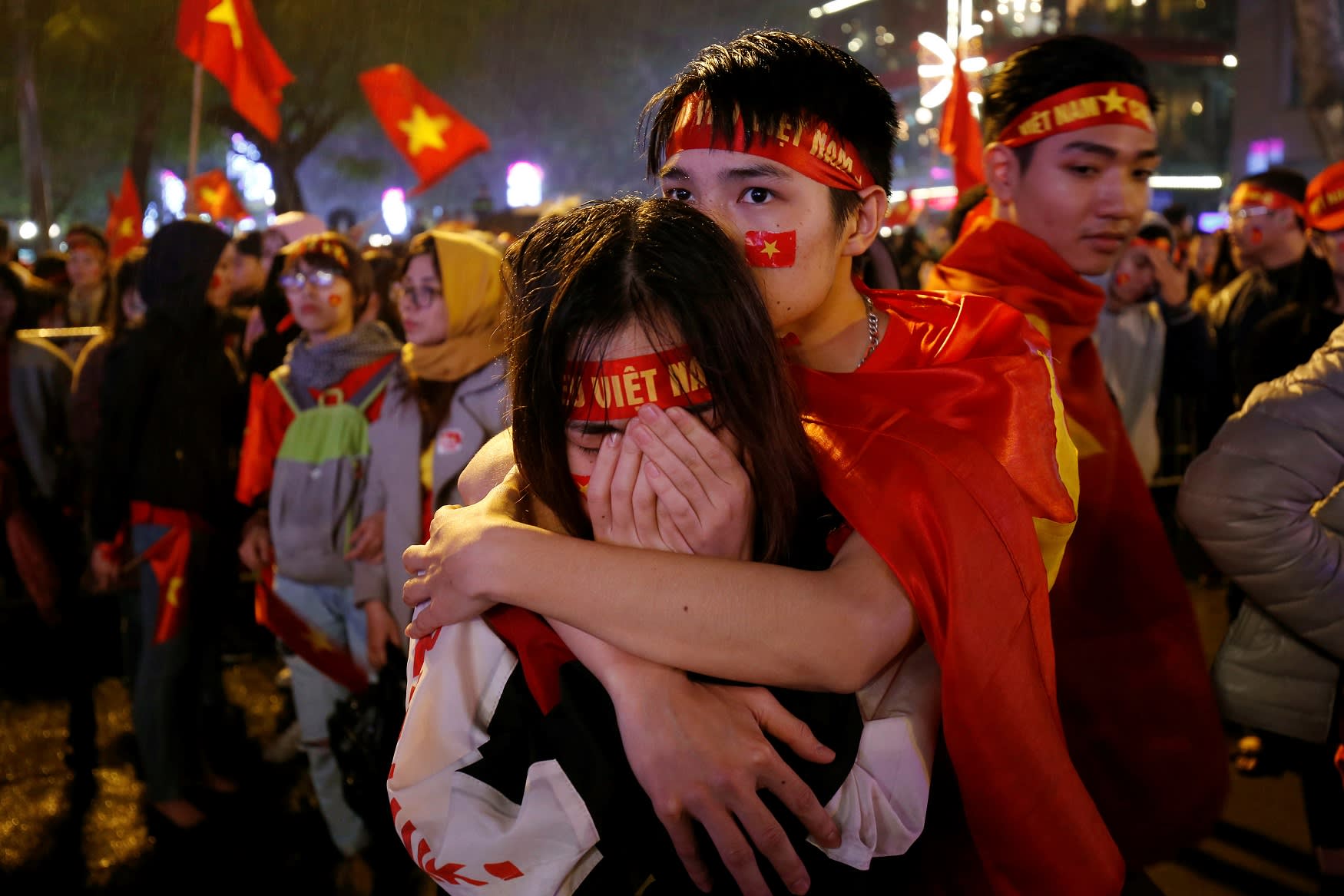 HANOI -- The Vietnam national team's first-ever appearance in the finals of the Asian Football Confederation U23 championship, triggered mass celebrations across the country, despite a close defeat in the final game on Saturday.

Hundreds of motorbikes and more than a thousand people thronged around the Hanoi Opera House at 8 p.m. on Tuesday, after the semifinal victory over Qatar, waving Vietnamese flags and making noise with drums, horns and shouts. An even larger crowd gathered near Hoan Kiem Lake, completely clogging the streets.

The celebrations went on until 2 or 3 in the morning. Strangers embraced and shared drinks, while police turned a blind eye to infractions rather than throw cold water on the atmosphere. Motorbike drivers blithely ignored traffic signals but were sure to call out whenever they spotted a pedestrian or a fellow rider holding a Vietnamese flag.

"I shared my joy with total strangers," a 25-year-old office worker at Hoan Kiem Lake said. "Even with the traffic, even after getting hit by a motorbike, I was totally fine." The finals on Saturday were held on a field covered with snow in China's city of Changzhou. Uzbekistan scored first but Vietnam caught up with an artistic free kick soon later.

Vietnamese hearts were broken in the final minutes of overtime when Uzbekistan scored the game winner from a corner kick. Hundreds of fans watching a huge screen in front of Hanoi Opera House were seen grabbing their head in their hands and letting out painful groans.

Yet, many were proud of their young countrymen. People took to the streets to wave the national flag all through the night.

Soccer is Vietnam's biggest sport. The response was similarly riotous when the national team won the ASEAN Football Federation's Suzuki Cup in 2008.

But the AFC U23 championship, while limited to players 23 or younger, is far broader than the Association of Southeast Asian Nations. Vietnam placed second in its four-team group in the initial stage of the tournament, above higher-ranked Australia, before notching dramatic penalty-shootout wins over Iraq in the quarterfinals and Qatar in the semifinals.

The enthusiasm is understandable. What is unusual is that the team's march to the finals has fostered a sense of national camaraderie in an increasingly unequal nation.

Vietnam has seen an influx of foreign companies and products since joining the World Trade Organization in 2007. South Korea's Samsung Electronics set up shop in 2009 and now accounts for 20% of the country's exports.

Gross domestic product per capita swelled 2.6-fold from 2007 to $2,385 last year. The country now has three billionaires, including Pham Nhat Vuong of real estate developer Vingroup. The middle class has grown, and standards of living have improved rapidly, with cars and appliances proliferating.

Yet life remains difficult for the farmers who still constitute 60% of the population. Many people still earn less than the urban minimum wage of 3.98 million dong ($175) per month.

Even with stricter Western-style work practices taking hold, many companies let employees leave early Tuesday to watch the semifinal. Such gestures are rooted in a communist ethos that includes respect for the working class. The soccer games have brought the Vietnamese people together, stirring memories of a communist ideal that now seems increasingly hollow.