HONG KONG -- The waving of American and British national flags by Hong Kong protesters has repeatedly outraged Chinese state media during demonstrations against the city's government in recent months.

But while hoping for official U.S. and U.K. support, the demonstrators themselves have found more inspiration by looking north to South Korea.

"South Korea is the pioneer when it comes to democracy in Asia," said Thomas, a University of Hong Kong student active in front-line protests who declined to give his full name out of concern for his possible arrest.

The demonstrators, he said, have studied tactics used by South Korean farmers when they clashed with Hong Kong police in December 2005 while protesting outside a World Trade Organization ministerial meeting in the city. One copied technique involves building road blocks out of the metal street fencing that lines Hong Kong's streets.

Until the protests, Korean pop culture was a much bigger element of the everyday life of most Hongkongers but now it is South Korea's protest culture that has captured imaginations. Hong Kong demonstrators have copied tactics used by protesting South Korean farmers at a WTO conference in the city in 2005.   © Reuters

At a June 15 rally in downtown Hong Kong, a group of middle-aged residents sang a Cantonese version of "March for the Beloved," a song recognized as the de facto anthem of the 1980 Gwangju uprising against South Korea's then-military government. In a tweet in October, Joshua Wong, the city's most prominent young activist, paired photos of protesters getting arrested in Gwangju in 1980 with recent shots from Hong Kong.

Recent South Korean movies about the country's long democratization struggle are getting fresh showings, especially the 2017 films "A Taxi Driver" and "1987: When the Day Comes."

In "A Taxi Driver," a South Korean cabbie risks his life driving a German photojournalist who is covering the Gwangju unrest. The film has inspired some Hong Kong taxi drivers to give free rides to protesters fleeing late-night clashes with police, according to an account published by the South China Morning Post.

"Hongkongers see parallels between the scenes of these films and their own struggle for democracy," said Steve Chung, assistant lecturer in Korean studies at Chinese University of Hong Kong, who said his local students look for ideas from episodes in South Korea's democratization movement because they see those protesters as "aggressive, resilient (and) ultimately successful."

"Like South Korea in the 1980s, protesters in Hong Kong have to deal with brutality from state forces, and students are the main drivers of the protests," he added. "When the front-line protesters are feeling helpless with the situation in Hong Kong, especially with regard to (the Chinese Communist Party) and [Chief Executive] Carrie Lam, they find hope in South Korea."

The South Korean media and public are also giving far more attention to the protests than they usually would to events in Hong Kong. The country's four main TV networks, for instance, all reported live from the scene of a rally in downtown Hong Kong one day in August. And on a recent day in November, four of the top 10 trending articles on Naver, South Korea's biggest online portal, related to the protests.

Some South Koreans are publicly showing their support for the Hong Kong protesters. At a rally in Seoul in August of the right-wing Our Republican Party, the demonstrators were described as "resistance against the Chinese Communist Party."

Actor Kim Eui-sung, known for his role in the thriller "Train to Busan," generated excitement when he attended a protest in Hong Kong in September, remarking that it "brought back memories of Gwangju." And on Oct. 4, 65 South Korean civic groups held a support event in Seoul, shouting slogans such as "Liberate Hong Kong, Revolution of Our Times" in Korean and Cantonese.

"I think South Koreans are quick to support the Hong Kong protests because of our ingrained dislike for socialism," said Park Ki-jun, a retired civil servant in Seoul who closely follows news of the demonstrations but has not attended rallies.

"Our netizens are a scary force. If a journalist shows anything besides unconditional support for the protesters, he or she will get grilled online," he added, shrugging off the trend toward increasing violence around the demonstrations. "For most of us, it is only natural that the Hong Kong protesters would attack policemen obstructing their path," he said. 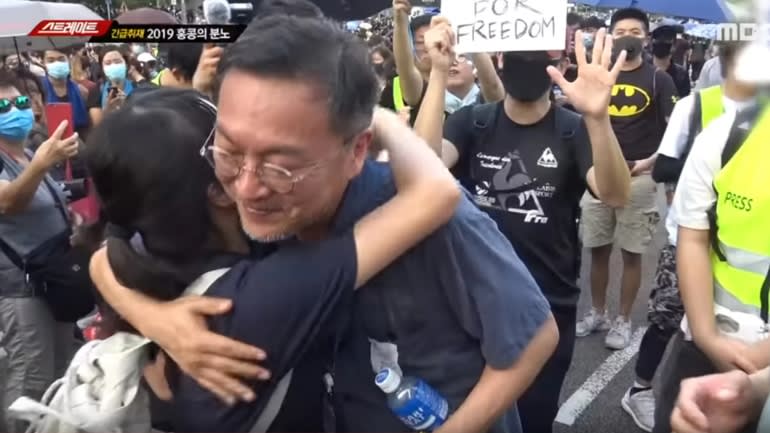 Actor Kim Eui-sung, known for his role in the thriller "Train to Busan," generated excitement when he attended a protest in Hong Kong in September, remarking that it "brought back memories of Gwangju." (Screen grab from YouTube)

Despite widespread sympathy from the public, South Korean President Moon Jae-in, a veteran of the country's democracy movement, has not publicly commented about the protests. This might be out of concern for retaliation by China, one of his country's most important trade partners.

Already some South Korean celebrities, like peers elsewhere, have come under attack from Chinese internet users over their perceived backing of the demonstrators. For example, singer Choi Siwon of the band Super Junior was forced in late November to issue a public apology after his "liking" of a newspaper's posted link to an interview with a protester triggered an outcry from China.

South Korean universities meanwhile have recently seen confrontations between Chinese students, backed by the country's diplomats, and Korean supporters of the protests. Local police have said they are considering charging a number of Chinese students for vandalism in relation to incidents where they damaged or destroyed pro-protest banners.

Such incidents have made clear to South Koreans that Hong Kong protesters are facing mighty challenges in advancing their democratization struggle.

"Our people just had to topple one man," said Park, the Seoul retiree, referring to military strongman Chun Doo-hwan. "But Hongkongers have to contend with the giant that is China."