They promote fusion cuisine and political liberalism as exiles 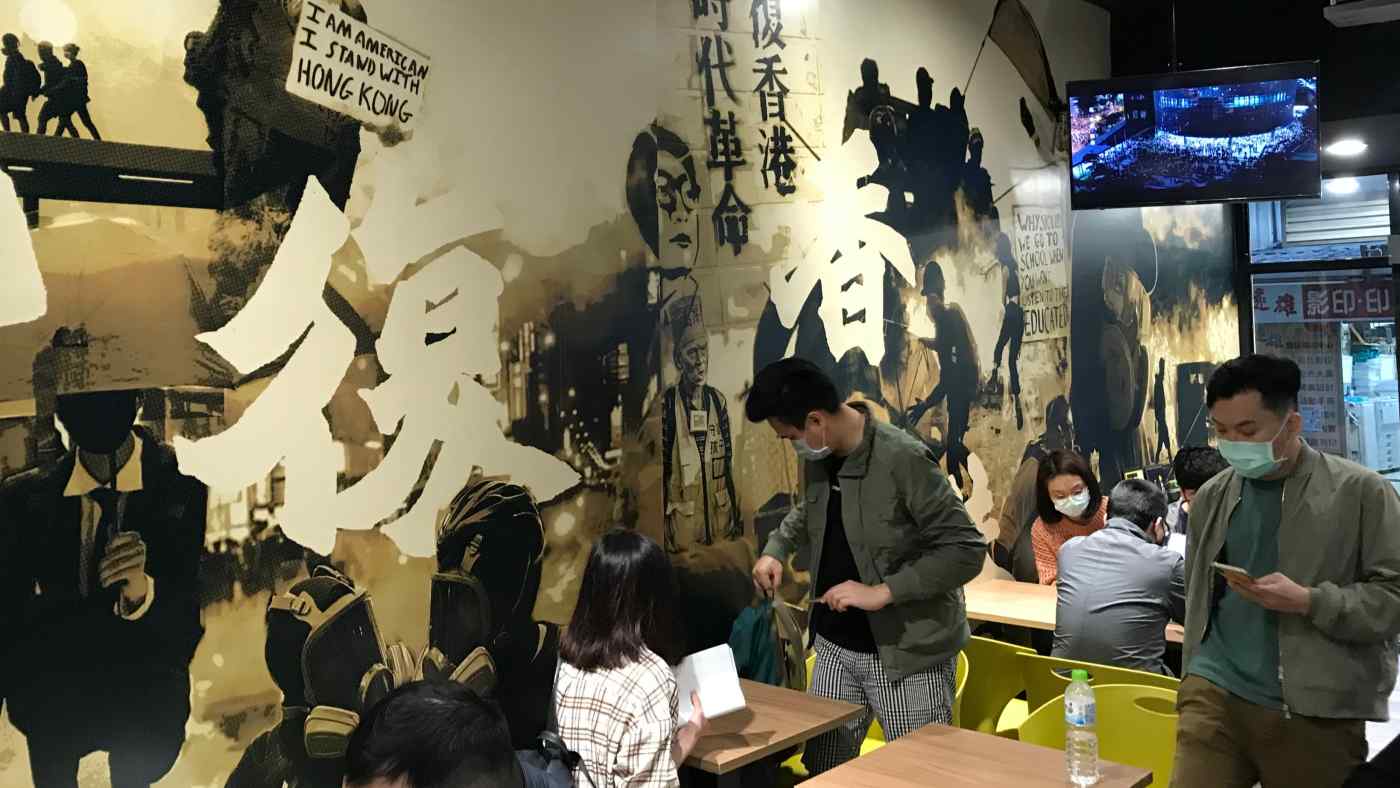 TAIPEI -- On the walls of Protection Umbrella, a restaurant opened by Hong Kong anti-government protesters in a quiet neighborhood in Taipei, there are paintings of young protesters wearing goggles and hard hats, clashing with lines of police firing tear gas -- images that embody last year's political upheaval.

The diners, some chatting in Hong Kong's Cantonese Chinese rather than the Mandarin widely spoken in Taiwan, tuck into plates of Hong Kong-style French toast -- deep-fried eggy bread with peanut butter in the middle, heavy with syrup and a square of butter on top -- which is a staple of a traditional Hong Kong cha chaan teng, or tea restaurant.

A young student, who asked to be referred to as "Fish," fled to Taiwan after working as a first aid responder on the front lines of the protests. She is scared of being arrested or "disappeared" and will not return to her home city anytime soon, but said pro-Hong Kong restaurants alleviate some of her homesickness.

"You feel like all customers are your friends even though you haven't met each other before," says Fish as she sips on a red bean ice made with crushed beans, sugar and condensed milk at Protection Umbrella. She also "visits" Hong Kong neighborhoods using Google Street View when she misses the city.

Protection Umbrella, which employs and assists fleeing demonstrators, is one of a growing number of restaurants and cafes set up by Hong Kongers in Taiwan. Many are adorned with artwork and artifacts of the Hong Kong protests and cook up fusion dishes, like replacing the bread in a traditional Taiwanese breakfast sandwich with Hong Kong's pineapple bun. 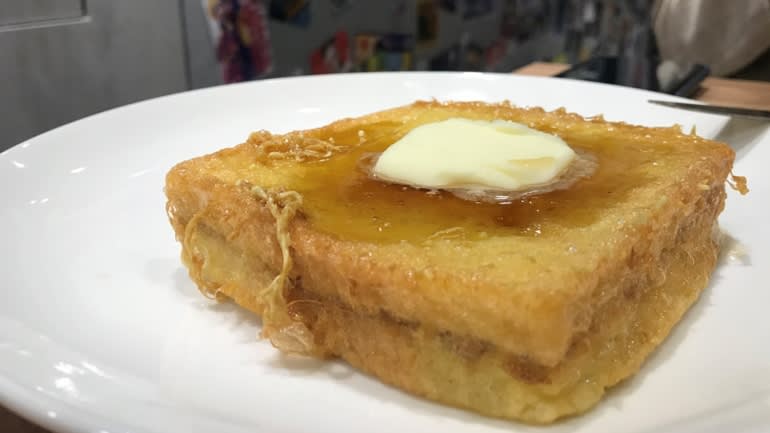 Taiwan is a safe haven for Hong Kong exiles, and these restaurants have become hot spots for the fusion of two of Asia's most popular cuisines, as well as cultural and political meeting places for opponents of China's growing influence in the region. 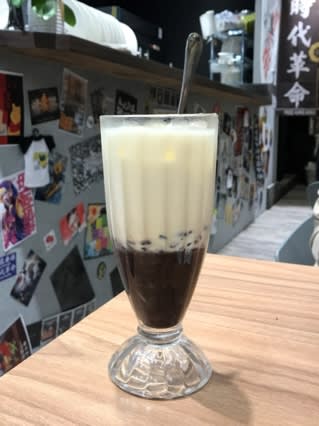 More than 5,800 Hong Kongers were granted Taiwan residency in 2019, a 41% surge on the previous year. Many are looking to escape what they say is the swift erosion of Hong Kong freedoms by China and to head to Taiwan, known for its democracy, free speech and liberalism.

Some take advantage of Taiwan's long-term visa available with investments of $200,000 -- a lot less than other parts of the world -- and set up restaurants and cafes hoping to continue the political revolution and push for democracy in Hong Kong from abroad. 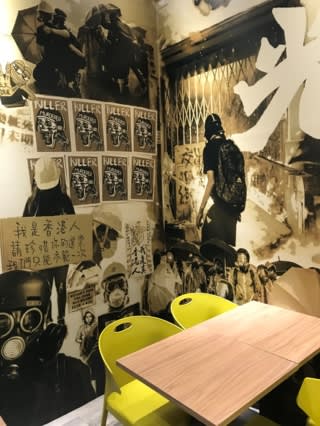 The decor at Protection Umbrella makes no attempts at subtlety. (Photo by Rik Glauert)

But after China announced a planned national security law for Hong Kong that would criminalize secession and subversion, Taiwan said it may revoke Hong Kong's special status that allows for easy travel and investment. It did, however, pledge a "humanitarian rescue" plan to provide safe harbor to anti-government protesters.

In a space above Edith Chung's pro-Hong Kong restaurant in the southern city of Tainan, she holds screenings, discussions and workshops on Hong Kong-related issues. To combat misinformation and to prevent "fake news" from reaching Taiwan, Chung uses Facebook to verify or add context to developments in her home city and shares the information with her nearly 5,000 followers.

"To fight against the government or policemen on the front line is important," says Chung, who opened Swirl By Swirl in 2018, "but this is how I speak out for the people. This is how I devote my life to the revolution." 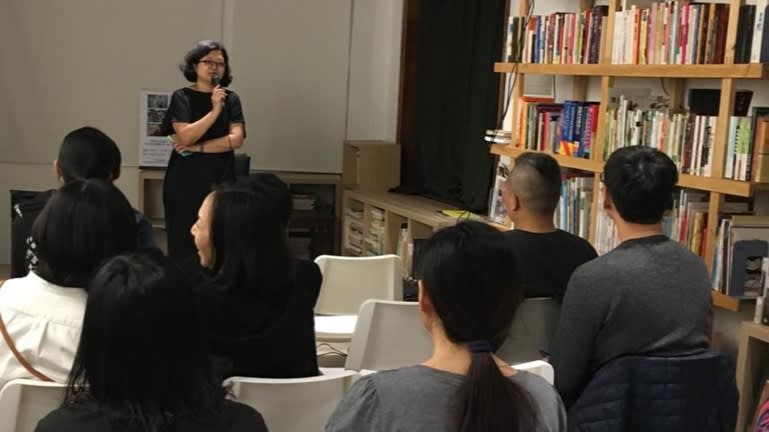 While Chung sources ingredients from local farmers for her Cantonese classics such as rice baked in a clay pot or congee, a rice porridge served with seafood, she imports some key ingredients for authenticity. She uses a paste made from dried shrimp in a traditional fishing village on Hong Kong's sparsely populated and mountainous Lantau Island.

"I wanted to let Taiwanese know another side of Hong Kong," Chung says. "It is not just a city of shopping and dim sum; we also have wild animals and beautiful scenery."

According to Chung, the biggest differences between Hong Kong and Taiwan's cuisines are timing and patience. She complains that Taiwanese soup tastes like "salty water" compared to the Hong Kong bone soup which is stewed for hours. "Taiwan people don't believe it takes one-and-a-half hours to braise my chicken wings," she says. She serves them with local water chestnuts. Rice with chicken baked in a clay pot. (Courtesy of Swirl By Swirl)

For her, preserving traditional Hong Kong flavors through a sustainable business is a continuation of the years she spent advocating for democracy in Hong Kong before moving to Taiwan in October 2018. "What does rebellion really look like?" asks Chung. "I learned to survive through my manual work and to support farming, to love our mother earth, to unite with people, to be grateful to our universe." 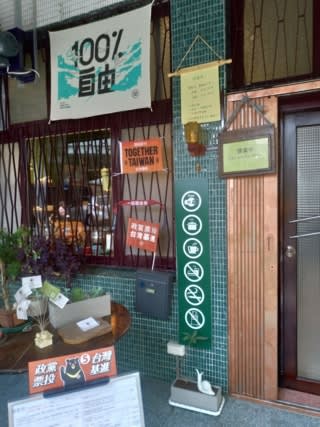 But her emotions are conflicted. "It seems that I am totally safe in Taiwan, and my people suffer in Hong Kong," she says. "There is a guilty feeling, that I have betrayed them."

With the imposition of the national security law, Chung says, the Hong Kong protesters' threat "if we burn, you burn with us" is no longer just a slogan. "It will become the true situation," she says. "Hong Kongers feel hopeless, even the ones outside Hong Kong, but we also know we have to fight."

In Andy Lam's cha chaan teng in Taipei, a photo depicting the neon signs and busy streets of Hong Kong's Mong Kok neighborhood, which has regularly witnessed clashes between protesters and police in the last few years, fills one wall. Lam includes Hong Kong's curry fish balls on his menu, a nod to a 2016 confrontation with police in Mong Kok sparked by a crackdown on street vendors, dubbed "the fish ball revolution."

After graduating from a Taiwanese university in June last year, Hong Kong native Lam, 26, flew back to Hong Kong to join the hundreds of thousands protesting the bill, now withdrawn, that would allow criminal suspects to be extradited to mainland China. Lam says the Hong Kong police's violence toward the young protesters on the front line shocked him: "They used to respect the people, but now they have too much power." 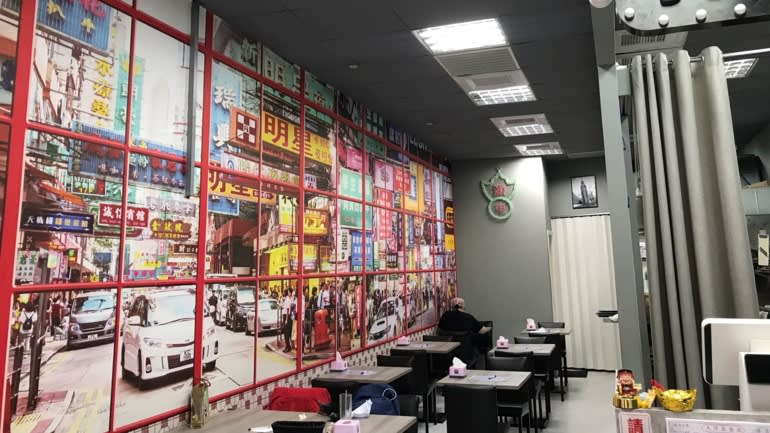 While he was in Hong Kong and the protests were raging, Lam collected the funds he needed and left his home city to open his restaurant in Taiwan in September last year. "There is no future for young people in Hong Kong," he says.

He too has a sense of guilt about leaving Hong Kong. "I am working hard, but I feel helpless," he says.

He welcomes the restaurants and cafes as spaces that offer support to young protesters, some of whom suffer from post-traumatic stress disorder as well as physical injuries after violent clashes. However, Rev. Lim also urges Taiwan's parliament to expedite a Refugee Act that would allow Hong Kongers to formally seek asylum in the country.

Taiwan's President Tsai Ing-wen was reelected by a landslide in January after running on a platform rejecting China's influence on the island. But not all Taiwanese people are interested in or sympathetic to Hong Kong's fight against China's authority, and Taiwan has a minority which favors a closer relationship with Beijing.

In Lam's cha chaan teng, he meets customers of both mindsets. He hands out free glasses of traditional Hong Kong milk tea -- made with condensed milk -- not only to young Hong Kong protesters who have fled the front line, but to local pro-China residents.

The latter guests view Hong Kong protesters as violent radicals funded by foreign governments, in line with China Communist Party propaganda. Lam says he has learned to be patient and polite when speaking with guests with vastly different political opinions to his own: "I hope that they will stay and listen to the true situation in Hong Kong."

He has left one part of his restaurant's walls blank for the time being. "I hope Hong Kongers can continue to write their history here. ... After all, in a few days Hong Kong won't be able to speak for itself," he says, referring to the new national security law.

"After finishing off Hong Kong, China will focus on Taiwan," he warns. "In the future, I will stand on the side of Taiwan against China."