SINGAPORE -- Described by specialist drink retailer the Whiskey Exchange as having the "perfect balance of fruit, peat and power," the Black Bowmore 1964 Islay Single Malt Scotch Whisky holds legendary status among aficionados of fine spirits. But it comes at a price.

This is just one example of the type of gains investors in collectible spirits can expect, Murray Holdgate, general partner at Rare Finds Worldwide, told Nikkei Asia in an interview.

Rare Finds manages a whiskey brokerage that began courting wealthy investors in Hong Kong last year. It offers well-heeled collectors the chance to buy into bottles and casks of rare single malt Scotch as an alternative to other asset classes such as equities or real estate.

"Generally speaking, we'll be looking at casks to double in value over a five-year period," Holdgate explained. "So, from an investment time horizon, three to five years is kind of where you'd want to be looking to basically pick assets, and then trade them." Rare Finds Worldwide offers investors access to some of the oldest and most prestigious single malts in the world, from top-tier Scottish distilleries like Macallan, Dalmore and Bowmore. (Courtesy of Bowmore Distillery)

The company, which focuses exclusively on whiskey as an investment vehicle, offers its clients access to some of the oldest and most prestigious single malts in the world from top-tier Scottish distilleries including Macallan, Dalmore and Bowmore.

Rare Finds is made up of investment banking professionals and alternative investment specialists who advise Hong Kong's wealthy on whiskey as an asset. The company's largest stakeholder is Platinum Rise Capital Partners, an investment and development finance company based in the city.

Singapore is the next target market for the company, Holdgate told Nikkei, emphasizing that Hong Kong's ongoing political turmoil was not the reason why Rare Finds was spreading its net. The investment company is exploring the potential for setting up a Singapore office within the first half of next year, where it will also serve the neighboring Malaysian market. 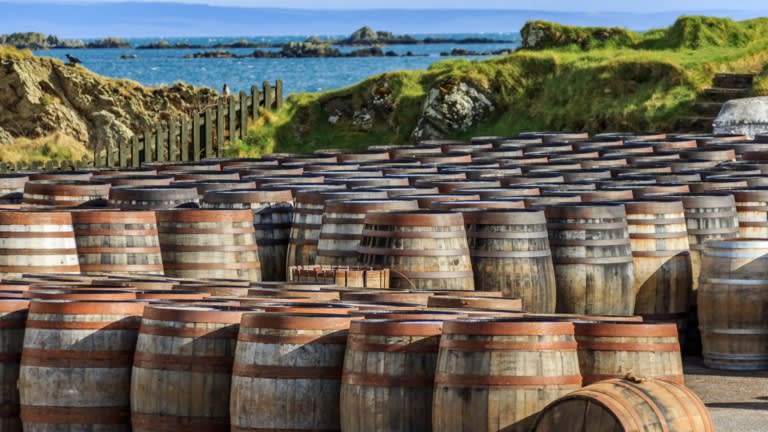 Rare Single Malts is a fund that lets investors buy into whiskey casks that are between 15 and 40 years old, as well as bottles over 30 years. (Courtesy of Rare Finds Worldwide)

In June, China moved decisively to impose a new security law that punished political crimes and diminished Hong Kong's already largely theoretical independence from Beijing. It marked another turning point in a troubled year for the financial center, which has been hit by waves of anti-China protests and the ongoing COVID-19 pandemic. Hong Kong's woes have spurred corporations and the wealthy to consider shifting assets from the Chinese-ruled city to elsewhere in Asia. And Singapore, with its business-friendly climate and political stability, has become a prime candidate for investors.

Holdgate, however, points out that the strong demand for investing in whiskey in the city-state is the key reason why his company was expanding its reach into Singapore, while keeping its base firmly rooted in Hong Kong. He noted that Singapore was one of the top export markets for Scotch in Asia in 2019 -- hitting a value of 300 million pounds. The country's wealthy, he said, has approached his company on whiskey investing, even though it does not have a physical presence there yet.

"Faced with extreme market volatility and a prolonged global recession, many investors are turning to alternative assets such as whisky to weather the storm," Holdgate noted, adding that the pandemic has actually brought upside to his business. In the last six months, he said inquiries had risen by 20%, with revenues increasing 15% month on month. Rare Finds earns its keep by charging customers commission fees from 5% to 10% on the brokerage side. It has also launched a fund -- Rare Single Malts -- which lets investors buy into whiskey casks that are between 15 and 40 years old, as well as bottles over 30 years, with a view to realizing capital growth with market appreciation of the fine spirits.

Only those with deep pockets need apply, however. The fund has a target commitment of 20 million pounds and a minimum subscription of 100,000 pounds for investors. The amount of money involved is why his company's customers are mostly high-net-worth individuals, family offices and boutique institutional investors, Holdgate said, while emphasizing the commensurate rewards to be expected with whiskey investing.

Citing U.K.-based consultancy Knight Frank's Wealth Report published last year, he noted that in the decade leading up to 2019, the value of whiskey increased by 582%, outperforming other investments and collectibles, including rare coins, cars, rare stamps, art and fine wine. According to Knight Frank’s Wealth Report published in 2019, whiskey has outperformed other investments and collectibles, including rare coins, cars, rare stamps, art and fine wine. (Courtesy of Macallan)

As with other assets that promise handsome returns, risks are usually present. There is a chance the market for maturing whiskeys could sour. Also, fake bottles passing off as the real deal have surfaced before, duping the less-discerning. But the eye-popping figures seen when some transactions are closed, however, have continued to stoke interest in this segment of investing.

Last year, a bottle of Macallan 1926 60-year-old Scotch whisky set a new world record after fetching 1.5 million pounds at auction. Holdgate believes the thirst for the "liquid gold" will only continue increasing, even among teetotalers. "Some people we have on the investor side simply don't drink alcohol. They're just very happy to realize that this is an asset class in itself, that increases in value."