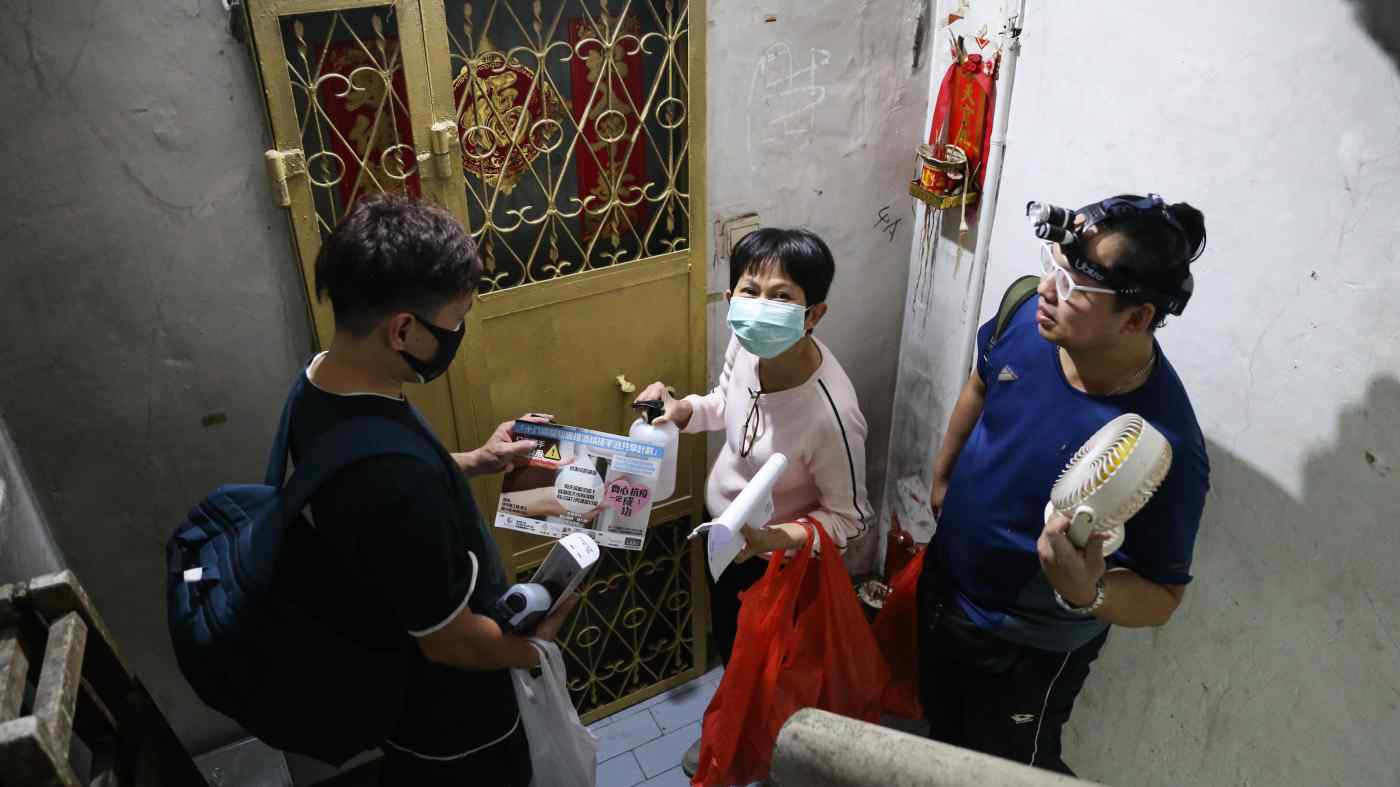 Gillian Wong, a petite, semiretired accountant in her sixties, leads the way into the dilapidated buildings, her eyes struggling to adjust to the dim light. Yan, a kindergarten teacher, follows, her bag weighed down by a 5-liter bottle of alcohol rub. The last member, Keith Tse, a construction worker on leave due to a leg injury, comes late but well-prepared, carrying a portable fan in one hand and a torch on his head. Both soon come in useful as the trio trudge up the stuffy, narrow stairways of the old tong lau -- tenement buildings -- of Sham Shui Po in Hong Kong.

Armed with a glue gun, bottles and posters, the volunteers are on a mission. They are among 80 teams spread out across all 18 districts of Hong Kong to install hand sanitizer dispensers at tenement buildings. These were built before the 1970s and as early as the 19th century, and are often poorly managed and in squalid condition.

Over two weekends in March, the initiative, run entirely by volunteers, reached 635 of 4,000 such buildings in the city. Red pins are scattered over the digital map the volunteers share, marking every block that has been covered. Their goal is to reach 1,500 and keep them supplied for at least two months.

However, the organizer, the Build & Wish Voluntary Team, now finds itself in a race against time as the number of new coronavirus cases soars in Hong Kong in a second wave of infections. Confirmed cases have gone from 100 at the start of March to over 900 now.

The idea first dawned on Gary Chiu, an event photographer and a father of three, who grew up in one such tenement building himself and remembers well the poor living conditions. 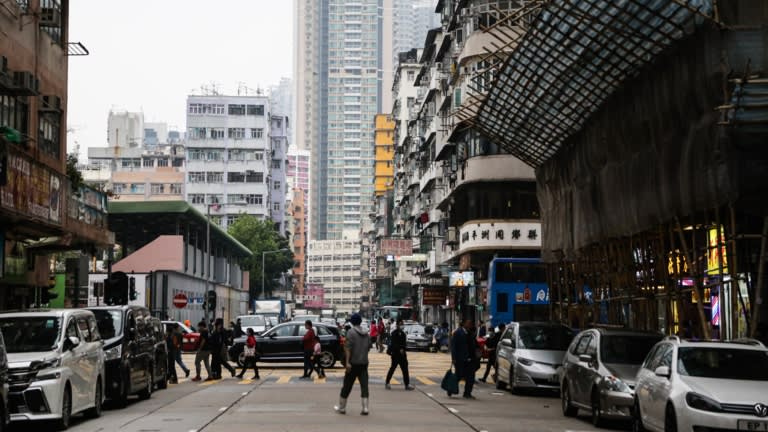 With the city nearing lockdown and all of his gigs canceled, he has been spending over 12 hours each day executing the plan along with other core members of Build & Wish Voluntary Team. "It's a bigger commitment than a full-time job," he admits. "But from the birth of the idea to its launch took only weeks. Even we did not expect to see such solidarity."

One reason for their group's success in mobilizing the general public is their extensive network of volunteers and experience in running community projects. In the past, they have offered free renovation and maintenance services for needy families, and debug treatments for those who could not afford to hire professional pest control. As soon as the outbreak hit, they also began distributing masks to the underprivileged.

In cramped, musty apartments with poor hygiene, the dispenser may offer only a thin line of defense against the virus, but with each installed, there is less risk of a community outbreak and a bigger chance to flatten the curve.

The task of installing a dispenser is simple. The challenge comes in finding a resident who is willing to refill it regularly with the disinfectant gel supplied. This proves to be tricky in a low-income neighborhood such as Sham Shui Po, where going door to door offers a glimpse of families' struggle with poverty, compounded by the coronavirus epidemic.

Often, no one answers the door. Working from home is not an option for the working class, who are living from hand to mouth. Sometimes, a door opens to reveal more doors, a flat illegally divided into several subunits to generate more rental income for the landlord. Other times, there are no doors within: Each space is separated only by wooden boards, where neither privacy nor isolation is possible.

Many tenants are the elderly living alone who could not refill the dispenser even if they wanted to, unable to make frequent trips up and down the steep stairways. But while the team is at it, one elderly woman asks, "Can you also remove the bamboo scaffolding outside the building?" A thief had climbed in the month before and stolen what little she had.

A young woman on her way home was an ideal candidate, but no, her lease ends this month, and yes, she cannot wait to leave the 100-sq.-foot apartment, which -- although smaller than a parking space -- costs over $6,500 Hong Kong ($840) a month. Some tenants are understandably guarded. Petty thefts are not the only crimes that happen in this neighborhood. Above a massage parlor, a woman spoke only through a closed door and asked the team to leave the stuff on the floor.

Finally, panting and sweating, Tse's glasses fogged up from the mask and his fan on full blast, the trio found luck on the fifth floor: After repeated assurance that it would not cost them a dollar, a family with toddlers said yes.

The team's effort is met with plenty of rejections, but it rarely walks away without finding a single resident who lends their support. Sometimes, the encounter is entirely by chance -- a man who went down to retrieve his delivery accidentally locked himself out of the flat, "but never mind, what is this dispenser thing again?" he inquires.

Only in one building, which reeks of urine, with crumbling walls and graffiti cursing those who leave rubbish in the stairway, does a tenant frankly tell the team: "Don't bother." She has irresponsible neighbors who will likely knock it down in no time. 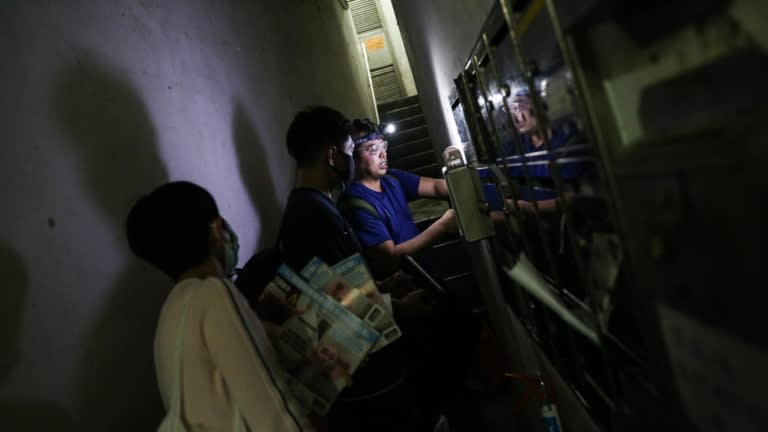 Volunteers work in the dark: The buildings are old and often in squalid condition. (Rachel Cheung)

Whether successful or not, the team files an entry for every building it visits, so the organization can keep track of the progress.

The nearly 300 volunteers may be the ones doing the legwork, but the operation can only come together thanks to dozens of local shops and restaurants that lend their space and act as resource stations where residents can refill their bottles and volunteers can pick up the tools they need.

Then there are the drivers, who pack and deliver the materials; administrators, who plan the routes and follow up; and the local skin care brand, everybody Labo, which supplies the hand sanitizer. None of them is paid.

The scheme is an example of how citizens can take initiative to protect their community amid the outbreak, even when the government is failing, and it introduces a model that can be replicated across the world.

The act itself may be small, but one cannot underestimate the difference it can make, says Chiu. "A mask can decide whether or not they can go to a doctor's appointment. And the dispenser could be the reason one did not become sick. Each of them has huge implications."

Ultimately, they hope to foster a sense of community, where people actively look out for each other. And although it is the worst of times, they are seeing the fruit of their work. One resident, when returning to refill the dispenser, found a note left by his neighbor on the third floor: "Thank you!"