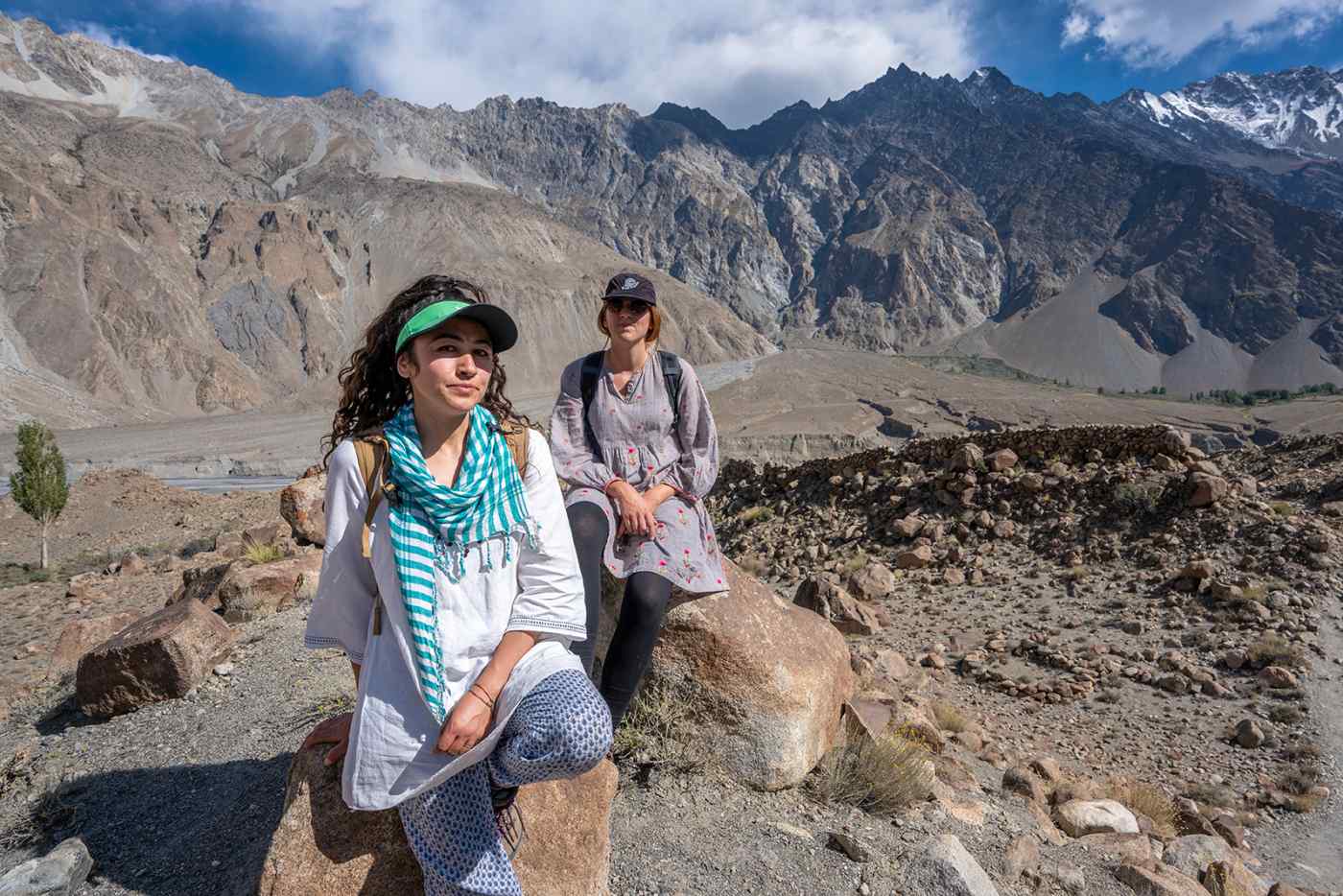 KARIMABAD, Pakistan -- Seated on a set of intricate woven rugs covering the floor of a traditional home in Shiskat, a small village in the Hunza Valley in Pakistan's northern region of Gilgit-Baltistan, I cannot help but feel surprised.

After weeks of traveling in a country where men dominate public spaces, I am sharing a meal with my host, his mother, and her sister -- something unthinkable in many areas of Pakistan, where most women still live secluded from outsiders. Sexual violence toward women is common, and a recent rape case in Lahore ignited street protests after a top police official partly blamed the victim for being out alone at night.

"Pakistan ranked 151 out of 153 countries on the Global Gender Gap Index report published by the World Economic Forum in 2020. In this patriarchal society, women get access to minimal economic opportunities, and the ones who do usually opt for career choices like teaching and medicine," says Lahore-based Aneeqa Ali, CEO of Mad Hatters, a tour company founded in 2017. "Those women who are rebellious enough to challenge the status quo have to face many setbacks and challenges."

In the Hunza Valley, though, most of the population are Ismaili, a sect of Shia Islam in which women are relatively visible in everyday life -- notably in the tourism industry, Hunza's major source of income. "Hunza people are quite open-minded and liberal due to higher literacy rates and exposure to international tourists," says Ali.

Against this background, tourism -- which started in the 1970s, when tourists started to visit this picturesque alpine valley along the Karakoram Highway connecting Pakistan to China's Xinjiang Province -- has provided a route out of the home and into employment for many local women. Lahore-based Aneeqa Ali is the CEO of Mad Hatters, a tour company founded in 2017. (Courtesy of Root Network)

In Karimabad, the capital of Hunza District, local women have been learning male-dominated skills such as carpentry and stone masonry since 2003, when CIQAM, a local nongovernmental organization formerly known as Women Social Enterprise, started operating with support from the Aga Khan Foundation, a not-for-profit development agency founded in 1967 by the hereditary head of the Ismaili sect. The organization currently employs more than 90 women in heritage development activities.

Gulmit, a scenic village in Upper Hunza, is home to two other female-led initiatives: Bozlanj, a restaurant that opened in 2016 to cater to foreign visitors to a nearby glacier, and the Korgah Carpet Center, opened in 2005, which employs local women to weave handmade rugs and embroidered purses and wallets for sale to tourists.

These small-scale projects represent significant steps toward establishing a role for women in the local business community. Much remains to be done, however. "Hunza's tourism industry is [still] largely occupied by the men of the region," says Mehnaz Parveen, the first female Hunzai CEO of the 23-year-old Karakorum Area Development Organization, a local NGO, in Aliabad, the Hunza Valley's main town. 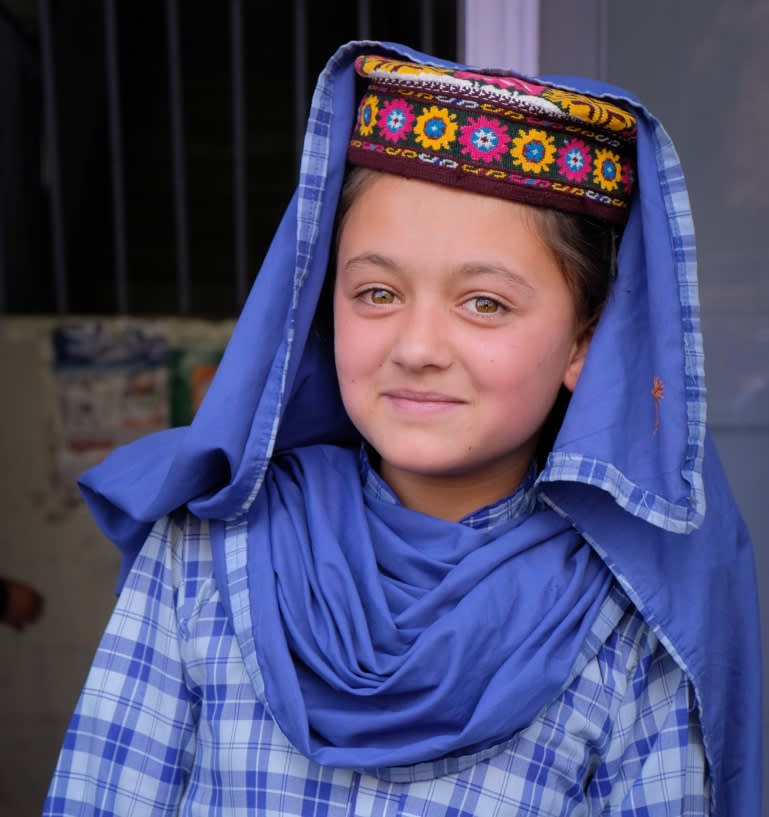 Parveen, a Hunza native who returned to the area in 2019 after 16 years in relatively cosmopolitan Islamabad, describes her work as "bittersweet" because of the difficulties involved in achieving the goal of social progress for women. "I believe my success will pave the way for other local young women to aspire for such positions, which is why I feel it's worth taking the pain," she says.

The subsidiary role of women in Pakistan conflicts sharply with the image presented by the mainstream tourism industry in recent years, which has relied on foreign female influencers like Polish-born vlogger Eva zu Beck and Canadian Muslim convert Rosie Gabriel to present the country as a safe and friendly destination, including for women. Gabriel dramatized this image by traveling across Pakistan by motorcycle.

Helped by a relaxation of visa procedures, Pakistan earned 2.3 trillion Pakistani rupees ($14 billion) from tourism in 2019, according to a March 2020 World Travel and Tourism Council Report, welcoming 24,487 foreign arrivals, compared with just 5,575 in 2014. Top: A close-up visit to the Passu Glacier. The Karakoram Highway brings visitors within striking distance of some of the Hunza Valley's most spectacular natural sights. (Photo by Kit Yeng Chan) Bottom: Laila Rajani walks in the Chitral District's Ramboor Valley with local Kalasha women. (Courtesy of Root Network)

After a four-month lockdown prompted by the COVID-19 outbreak, Pakistan reopened its borders and ended domestic tourism controls on Aug. 15, prompting fears in Hunza about coronavirus risks from domestic tourists, many of whom are said by locals to be ignoring health requirements such as negative tests results. Pakistan had suffered 319,317 coronavirus cases and 6,580 recorded deaths as of Oct. 12.

The pandemic has provided fresh business opportunities for female artisans, however, including women trained by KADO who are producing reusable face masks. "We sold 19,000 pieces in four months with the help of 50 [local] women," says Parveen.

Root Network, founded by Ali and four other women (Pakistani and foreign) with hands-on local tourism experience, is raising funds through a crowd-funding effort and has just completed training in 12 areas of Gilgit-Baltistan for almost 200 Hunza locals working as hotel staff, tour guides and porters in procedures to curb the spread of the virus. 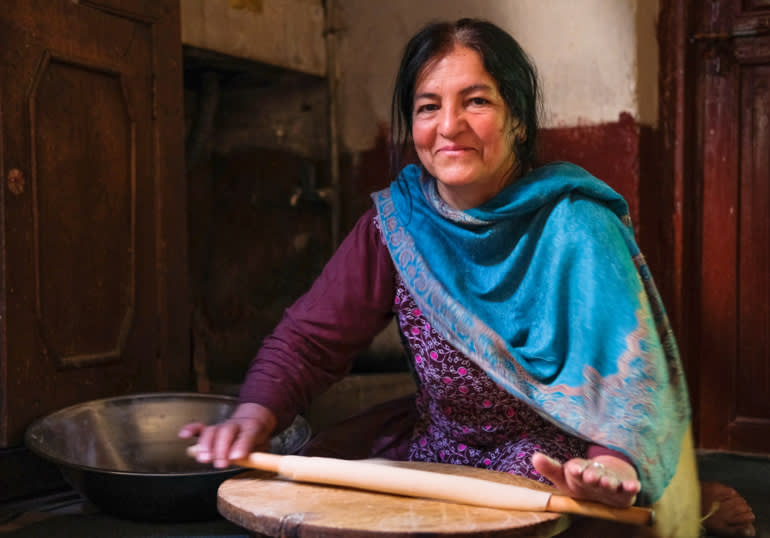 Top: A female traveler and local guide take in the beauty of the Hunza Valley. (Courtesy of Root Network) Bottom: A Shiskat woman prepares food. (Photo by Kit Yeng Chan)

Root Network's long-term goal is creating a more sustainable model so that "local community members [will] not end up dealing with the detrimental consequences of wanderlust, instead of benefiting from the economic opportunities," says Canada-based Pakistani expatriate Turfah Tabish, Root Network's strategist.

American travel blogger Alexandra Reynolds, who is also involved in Root Network, says the group wants to work with existing organizations to amplify the impact of its attempts to help locals understand sustainable tourism and to ensure acceptance.

"We have those connections in Gilgit-Baltistan, where it is also easier to work in as women than other areas of Pakistan like Khyber Pakhtunkhwa," Reynolds says. Khyber Pakhtunkhwa, which lies along the border with Afghanistan, was formerly known as North-West Frontier Province. Root Network says it hopes that its pilot project in Hunza will enable the organization apply for funding and support from official sources, with the goal of replicating its program in other risk-prone tourism areas of Pakistan such as the Kalasha Valleys area of Chitral District in northern Pakistan.

An important lesson of the pandemic, says Parveen, is that Hunza needs to rely less on tourism in the future, focusing instead on developing local businesses that can survive interruptions to the flow of visitors.

Parveen says KADO has taken a step toward this goal by helping local women to sell their artisanal products online when local markets were closed during the lockdown.

"We are now working to raise the capacity of both young males and females in IT-related fields," she says. As the region's poor internet capacity improves, she adds, the online sector beckons with "huge potential" to grow businesses in Hunza and Gilgit-Baltistan.