In Vietnam, the face of South Korea is a sprightly sports coach 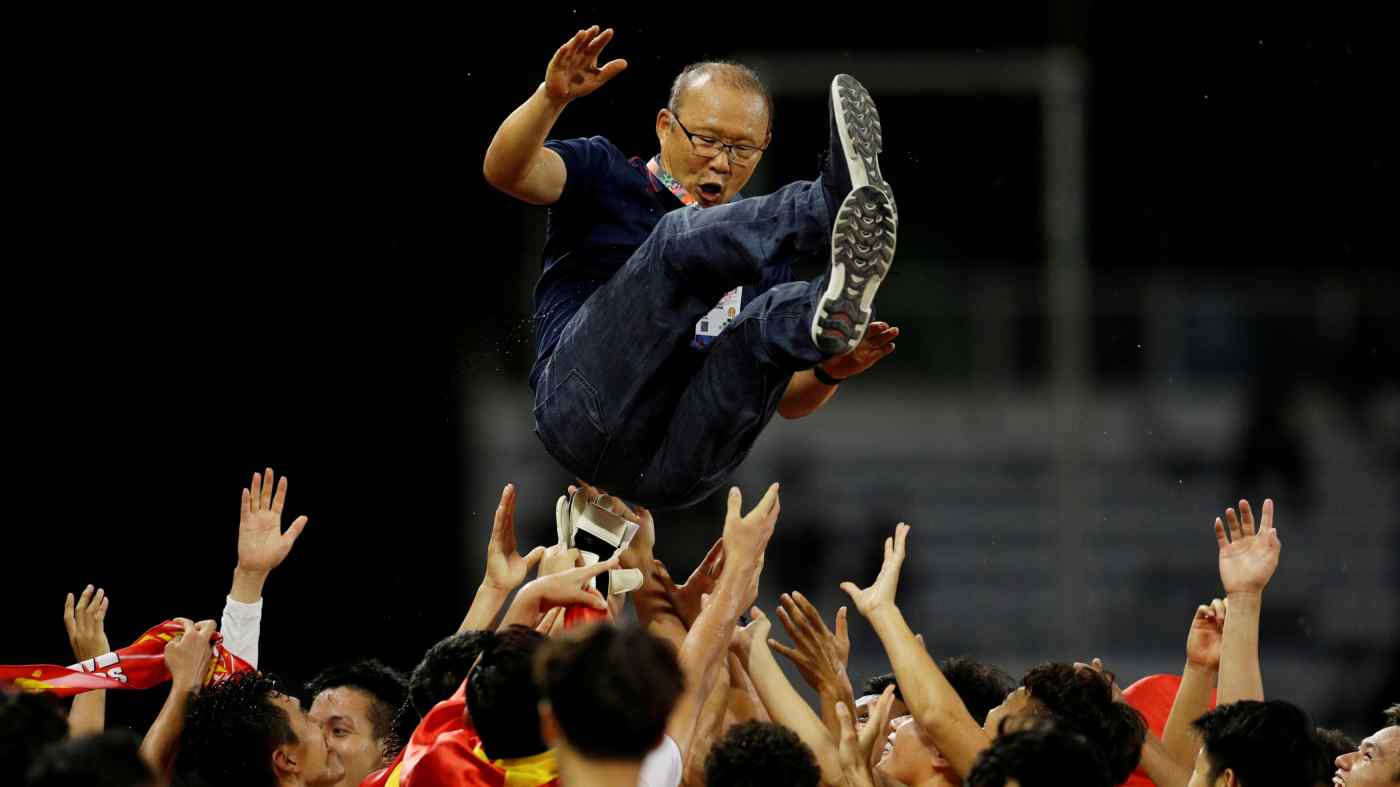 Park Hang-seo, the South Korean coach of the Vietnamese national soccer team, is tossed into the air by his players after their victory over Indonesia in the championship match of the Southeast Asian Games, in Manila in December 2019.   © Reuters
JOHN DUERDEN, Contributing writerApril 22, 2020 10:46 JST | Vietnam
CopyCopied

SEOUL -- South Korean companies advertise products all over the world, and have countless K-pop stars, actors and models to choose from. In Vietnam, however, the face of a host of Korean products -- from TVs to milk -- is a bald 61-year-old man.

Park Hang-seo's smiling image is ubiquitous -- on posters tempting Vietnamese consumers to buy Samsung televisions or kimchi, South Korea's national dish, and on packets of food such as "Seoul Hot Dogs." Dairy companies have also featured his face, as has Shinhan Bank, a leading South Korean financial institution. "If the family is the anchor to our life, then finance is a launcher," said Park when the Shinhan partnership was unveiled.

Park is accustomed to saying the right things for his sponsors, but his success is based on his appointment as head coach of the Vietnamese national soccer team in 2017. His soccer career at home had been solid but unremarkable, and the appointment attracted little attention at the time in either country. In all walks of life, however, timing is everything.

Park's lucky break was that he found himself working in Vietnam just as relations with South Korea were becoming closer than ever before. The relationship had been frosty for decades, mainly because of Vietnamese resentment of South Korea's role as a U.S. ally in the Vietnam War. These days, however, it is striking how two countries that are 2,000 km apart get on so well.

On the evening of Jan. 29, for example -- a random midweek evening before the spread of novel coronavirus plunged the world into chaos and suspended most travel -- no fewer than 11 flights left the Vietnamese city of Danang for South Korea. For anyone who has spent time in the city, on Vietnam's east coast, this is not a surprise. Danang's famous shoreline was called "China beach" by the thousands of American soldiers that landed there during the Vietnam War, but these days it is a favorite haunt for South Korean tourists, 3.48 million of whom visited the Southeast Asian nation in 2018. Park, shown here in a milk commercial, is a familiar face on Vietnamese TV. (Screen grab from YouTube)

Before the tourists came the businessmen. The two countries signed a trade agreement in 2015, and by 2017 bilateral trade between them had reached $63.9 billion. Almost a quarter of that was generated by Samsung, which is Vietnam's largest single foreign investor, with eight factories and a research and development center in the country.

Other South Korean investors include LG Electronics, Kumho Asiana Group, Hyosung, Lotte Group and the retail giant CJ Group. As billions of dollars of South Korean investment splashes around, it is unsurprising that companies have focused on finding a face that can connect corporate investors with Vietnamese consumers.

For this, Park is perfect. He is well-known back in his homeland, but is a much bigger name in Southeast Asia. In less than three years in charge of the Vietnamese national team he has taken it to the final of the 2018 Asia under-23 championship, won a Southeast Asian regional title in the same year (only the second victory for Vietnam) and reached the last eight of the 2019 Asian Cup. The team is currently well-placed in the early stages of the qualification process for the 2022 World Cup in Qatar, with hopes high that it can reach the final stages for the first time. 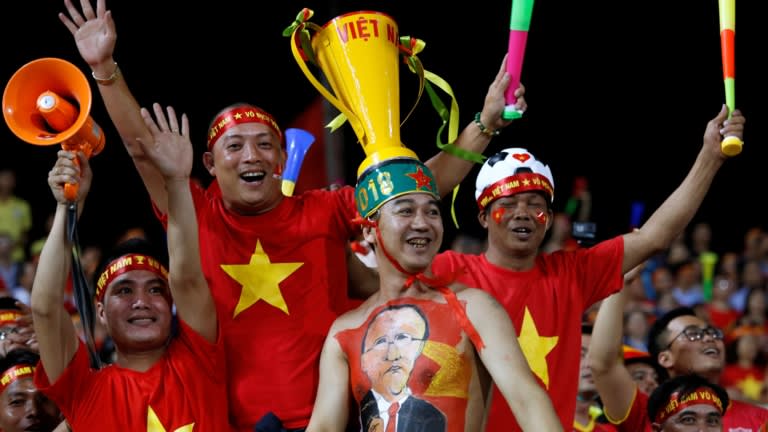 Fans show their enthusiasm -- and painting skills -- at a 2018 match against the Philippines at My Dinh Stadium in Hanoi.   © Reuters

These exploits have been greeted with rapture by fans, who have taken to the streets in their hundreds of thousands to watch Vietnam's international games on big public screens -- eerily reminiscent of the scenes during the 2002 World Cup, when South Koreans fans did the same thing. Park was part of the South Korean coaching staff for that tournament, held in South Korea and Japan.

But it is not just Park's success on the soccer field that has fueled his success as a marketing icon. His love for Vietnam appears genuine, and is much appreciated by the Vietnamese. "They have a spirit which only they have," Park once said. His management style, dubbed "Papa Leadership," is hugely popular. It includes giving up his business-class seating on international flights to injured players, and sometimes massaging their feet.

In South Korea, home to countless Vietnamese noodle restaurants, there is huge interest in Park's Southeast Asian exploits. In December 2018, an estimated 2.8 million South Koreans watched on television as Vietnam played Malaysia in the first round of the final of the Southeast Asian championship, drawing 2:2. (Vietnam won the second round 1-0 a few days later, taking the trophy 3-2 on aggregate.) The next month, thousands of people from Park's hometown of Sancheong took to the streets to cheer Vietnam in an Asian Cup quarterfinal against Japan, though it ended in defeat.

As South Korean investment in Vietnam grows, there will be a continuing need for a well-known marketing face, which means more commercial work for Park, at least so long as good results continue to flow. In January, the Vietnam team had its first setback under Park, failing to get past the group stage at the 2020 Asia under-23 championship.

It remains to be seen how the manager will react to that reverse, but the real test will be the World Cup qualification process. Vietnam has never appeared at the tournament, but was leading its group in the second stage of qualification when the process was suspended because of the coronavirus.

Park has been busy in Hanoi, analyzing previous games and conducting online strategy sessions. On March 26, he donated $5,000 to Vietnam's efforts to contain the virus.

"The amount is small," said Park in Hanoi, "but I hope it can directly help people who are affected to overcome their difficulties. I am ready to help Vietnam in any way I can."

There is still a long way to go. But if Park can somehow manage a place at the next World Cup, sports fans and businesspeople will be celebrating together, in South Korea as well as Vietnam.