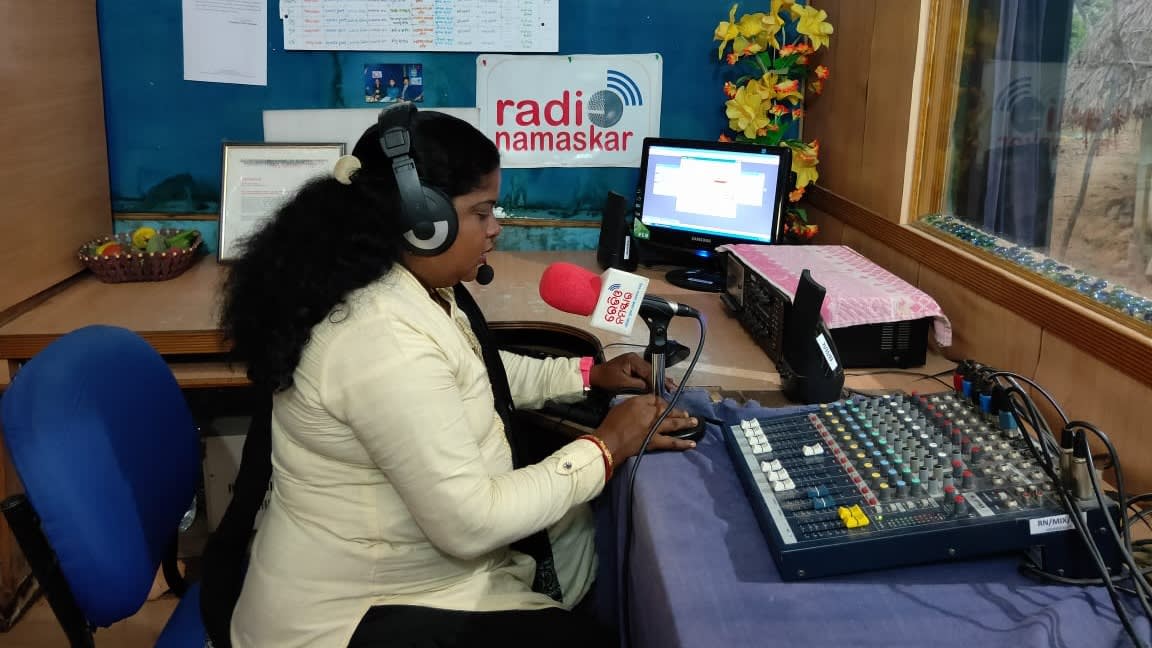 An anchor at work at Radio Namaskar, in the eastern Indian coastal state of Odisha. The station, located in Konark, plays a crucial role in keeping villagers informed about the coronavirus and other matters, as most do not watch TV. (Courtesy of Radio Namaskar)
NEETA LAL, Contributing writerMay 6, 2020 08:00 JST | India
CopyCopied

NEW DELHI -- "I'd have been dead by now if I hadn't learnt about coronavirus symptoms from Radio Henvalvani," says Ram Lakhi, 30, a farmer from the Tehri district of northern India's hilly Uttarakhand State.

"The community radio station's interviews with doctors pushed me to get myself tested for the deadly disease," says Lakhi. "And I was found positive even though I had no obvious symptoms! Thankfully, with timely intervention, and age on my side, I've recovered fully now. The radio was my savior."

For millions of poor people like Lakhi, community radio networks are playing a pivotal role in disseminating authentic information about the COVID-19 pandemic, which is caused by the SARS-COV-2 virus. Radio is the only window to the outside world for many of these people, so community stations have emerged as a vital communication channel since the country went into lockdown on March 24, confining 1.3 billion people to their homes.

From dispelling fake news to reiterating the importance of frequent handwashing and social distancing -- as well as issuing alerts about medicines and food distribution -- the channels are educating and reassuring rural and semi-urban communities in the remotest corners of the country. Many are also joining hands with local administrations to distribute food to needy families. A Henvalvani reporter interviews villagers about their problems in the northern state of Uttarakhand. The station connects 600 villages with a daily audience of 240,000 people. (Courtesy of Henvalvani Community Radio Uttarakhand)

In the Dindigul district of the southern state of Tamil Nadu, Pasumai Radio's reach extends to 1,500 villages, and the 13-year-old station caters to a daily audience of 5 million. Currently, say workers, its biggest challenge is to explain the concept of social distancing to its semiliterate constituency.

"In villages, nobody stays indoors, unlike cities. So we have to keep reinforcing this message to warn people that this is a matter of life and death," says J. Paul Baskar, Pasumai Radio's station head. "Our listeners are mostly humble farmers or fisherfolk. So our radio jockeys compose folk songs, skits or jokes in local dialects to connect with them. Positive messages about villages who have successfully battled COVID-19 are also relayed to inspire them."

Unlike India's 4,000 commercial radio stations, its 276 community radio outlets have a specific responsibility to work for local communities under guidelines laid down by the Ministry of Information and Broadcasting. While the number of community stations is woefully short of the 4,000 originally envisaged by the government, they are managed, controlled and owned by the communities they serve, and have given a voice to marginalized groups and highlighted hyperlocal issues. A further 118 are planned. Since India's Supreme Court cleared the way for commercial broadcasting in 1995, radio has emerged as the country's second most accessed media platform, outpacing social networking and behind only television, according to Nielsen, a market research company. Broadcast radio on the AM band reaches 99% of the population, while FM radio reaches 65%, according to a 2019 report by Ernst & Young and the Federation of Indian Chambers of Commerce & Industry. In addition, radio is highly interactive and free to audiences, unlike TV and print.

However, the voices of minority communities are often drowned out in this country of 22 officially recognized languages spread over 3.2 million sq. km. Local radio stations help to fill the gap at very little cost -- a station with transmitting power of up to 50 watts and a target range of 5 sq. km to 10 sq. km costs between 1.5 million and 2 million Indian rupees ($19,800 to $26,400). Basic equipment for recording, mixing, editing, and a 6-meter antenna costs a further 400,000 rupees.

On average the stations employ between 10 and 30 people, including presenters, computer technicians and reporters, all working under a station director. "These days, we operate in shifts and try to work mostly from home," says N.A. Shah Ansari, president of the Community Radio Association of India and station head of Radio Namaskar, in Konark, Odisha State, on the northeastern coast of India. Inside Radio Namaskar's Konark station: The voices of minority communities are often drowned out in this country of 22 officially recognized languages spread over 3.2 million sq. km. Local radio stations help to fill the gap. (Courtesy of Radio Namaskar)

"Many migrant workers of Odisha have returned home due to the pandemic scare. So we're helping in the strict enforcement of the lockdown," says Ansari. "Most villagers don't watch TV, so radio is the only medium to reach out to them. In a coastal and disaster-prone state like Odisha, especially, community radio's role in assisting local communities becomes critical." A DIY radio tower outside the Henvalvani studio. (Courtesy of Henvalvani Community Radio)

Much of the success of the community radio stations is driven by their participatory and interactive approach. "We serve the cause of the community by involving locals and keeping the content niche. We don't want to be preachy; the aim is to inspire, empower and engage," says Rajendra Singh Negi, station head of Radio Henvalvani.

"Currently, our most popular show is 'Corona se darna nahi, ladna hai' ('Don't fear Corona; fight it') which includes interviews with doctors who answer listeners' questions. It is an interactive engagement," says Negi.

Named after the Tehri district's Henval Valley, the station connects 600 villages with a daily audience of 240,000 people. "We've had many success stories lately," says Negi. "Recently, a listener sent us an audio message about 21 Nepalese migrant workers stranded in a remote corner of the district without food and water. We promptly informed the local administration, who tracked the group through GPS and saved lives." 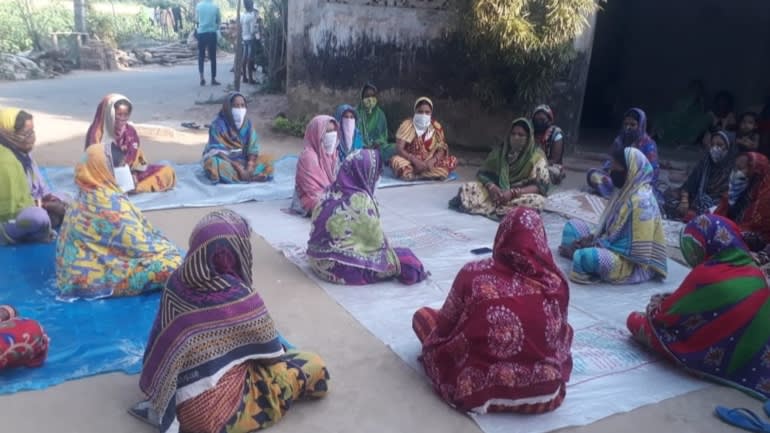 Women tune in to a community broadcast in Konark. (Courtesy of Radio Namaskar)

The station's biggest challenge is explaining abstract terms such as "social distancing" and "quarantine." "One listener called in to ask if the latter meant that a warrant had been issued for him!" says Negi. "There's also anxiety about hospital beds and distribution of essential supplies. We collate all queries and send them to various stakeholders -- the district administration, health institutions or [nongovernmental organizations]. The received answers are relayed through broadcasts."

The studio currently has eight people working six-hour shifts in rotation during its 18-hours-a-day operations. Voice inputs are sent by local reporters over WhatsApp. The station has also joined hands with the Umeed (Hope) Network, which groups seven of Uttarakhand's prominent community radios in the fight against COVID-19.

In the southern state of Kerala, Community Radio Mattoli is the state's first community radio to broadcast in the indigenous Paniya tribal dialect. Located in Wayanad district, and run by the nonprofit Wayanad Social Service Society since 2009, the network caters to 350,000 listeners. A Henvalvani reporter interviews a dairy farmer in Uttarakhand about his problems. Reporters send their recordings to the station over WhatsApp. (Courtesy of Henvalvani Community Radio)

"We have 24 hours of daily broadcasting of 80 varieties of programs and cover 85% of Wayanad district," says station director Bijo Thomas Karukappally.

The station is helping the local administration to whittle down the spread of COVID-19, minimize loss of life among health care professionals and augment mass awareness. But the lockdown has also presented it with a unique opportunity to tackle the district's pervasive alcoholism problem. To help those impacted by the closure of liquor shops, the channel is telling listeners how to contact support organizations and addiction centers.

"Our employees get very modest salaries and our infrastructure is also very basic. But we're happy that we're amplifying the voices of the most vulnerable and marginalized sections of society," says Karukappally. "Their empowerment is our strength. People trust us. It's a great feeling."