Many traditional studios have faltered but the fittest survive Yukio Toyoura practices the Navasana, or Boat Pose, at a beach in Bali, Indonesia. He quit his job as a systems engineer three years ago to become a full-time yoga teacher. (Courtesy of Yukio Toyoura)

TOKYO -- Japan's yoga industry, a vast market with annual revenues of 260 billion yen ($2.4 billion) is anything but tranquil.

After a boom in the early 2000s, many independent studios have closed because of soaring rents and tough competition in Tokyo and other major cities. At the same time, studios offering traditional yoga styles such as Iyengar, Ashtanga, Yin and Hatha are under threat from new chains specializing in "hot yoga."

This popular style, with roots in Indian tradition but stylized and imported from the U.S., is performed in hot and humid conditions said by practitioners to induce a state of euphoria and aid weight loss. LAVA Yoga, which bills itself as "Japan's No. 1 hot yoga brand," operates 430 outlets around the country, many of which run classes for up to 60 students at a time.

LAVA's studios tend to be in convenient downtown locations, within a 3-minute walk from major train and subway stations, and are usually equipped with large and comfortable changing and shower rooms, making them more attractive to many customers than smaller studios whose changing rooms are sometimes little bigger than closets.

The company declined requests to discuss its business model, but its website claims that about 1.5 million people have taken its classes -- sweating profusely and guzzling water as they work through a list of poses -- since the company was founded in 1990. An outdoor yoga event in Tokyo draws a big crowd in 2017. Japan's yoga market is worth nearly $2.5 billion.   © Reuters

"Most students are 30- to 40-year-old female office workers and housewives," said a former LAVA studio manager who worked at a number of branches. "You feel the strong impact of hot yoga to relieve stress or lack of exercise," said the former manager, who asked not to be named.

The company has expanded rapidly through incentives such as an introductory offer of unlimited classes over three months for 2,000 yen, followed by membership for 15,000 yen a month. This compares with average costs of 3,000 yen for a more traditional 90-minute class.

The industry is growing fast, in part because of such marketing practices. A 2017 survey by the Japanese-language magazine Yoga Journal found that 7.7 million people practice yoga in Japan, and forecast that the total could double within three years. It is unclear if that has happened, but the rapid changes in the marketplace are driving out many longstanding traditional studios. 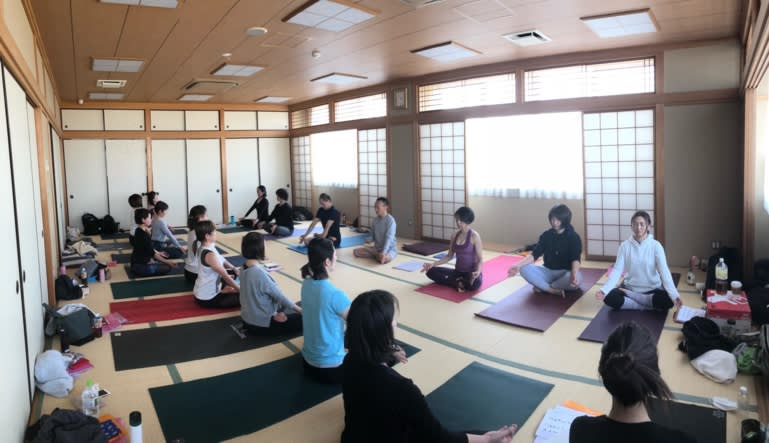 Toyoura teaches meditation during a yin yoga class at a community center in Tokyo. (Courtesy of Yukio Toyoura)

Even Kumiko Mack, an industry leader who introduced the U.S.-based Ishtar (Integrated Sciences of Hatha, Tantra and Ayurveda) style to Japan in 2000, closed her Be Yoga studio in August after 19 years of teaching bilingual classes. She is now teaching yoga workshops and classes at other major studios.

However, some entrepreneurial teachers are finding ways to thrive without trying to compete with the big studios and chains such as LAVA.

Former computer systems engineer Yukio Toyoura, 57, who quit his job three years ago to become a full-time yoga teacher, believes it can be done by renting community spaces for intensive courses and workshops, providing life coaching to other yoga teachers, and running online courses in yoga philosophy. Toyoura says his income has nearly doubled since leaving the IT industry. (Courtesy of Yukio Toyoura)

"There is no way to compete with those big yoga chains," said Toyoura, whose fitness and unlined face give him the looks of someone in his 40s. But he believes smaller businesses can survive by focusing on teaching and coaching yoga practitioners and instructors, deepening their knowledge of yoga philosophy, diet, meditation and lifestyle.

Toyoura said he has practically doubled his income since leaving the information technology industry. He runs three-day, 20-hour intensive courses for 100,000 yen per student, workshops at up to 6,000 yen per student and a 20-hour online philosophy course for 50,000 yen to 60,000 yen.

Others, like Mack and Akira Watamoto, who shut his family-run yoga studio near Tokyo's Ginza shopping district in May 2019, are running classes at other big studios in Tokyo to save on costs.

"Many yoga studios cannot get enough students to make a profit or even break even, so they end up going into more profitable teacher training with higher revenue," said Kyoko Hiraga, who runs Studio Shanti, a yoga studio with 200 regular members in Nihombashi, one of Tokyo's financial districts. Shanti's 200 members often drop by for stress busting and fitness training during lunch or after work. Not all yoga teachers can teach other teachers. Many have studied only the poses used in yoga, known as asana, rather than their associated philosophies and other practices. For those who can teach, however, business is booming. "Registered yoga teacher" certificate courses, which last 200 hours and cost 500,000 yen to 1 million yen, have become the "bread and butter" of many studios, said Leza Lowitz, an American yoga teacher who set up her Sun and Moon studio in Tokyo in 2003.

Lowitz, who is also a writer, has kept her studio small -- she can accommodate only 20 students -- and basic, without even a receptionist. "We have to pay the rent and pay teachers, but I never took it on as a profit-making endeavor. I took it as a labor of love," she said.

Still, she has managed to stay in business for the better part of two decades. Sun and Moon generally holds 24 classes a week and draws 100 students a week. Members pay 2,000 yen per class. 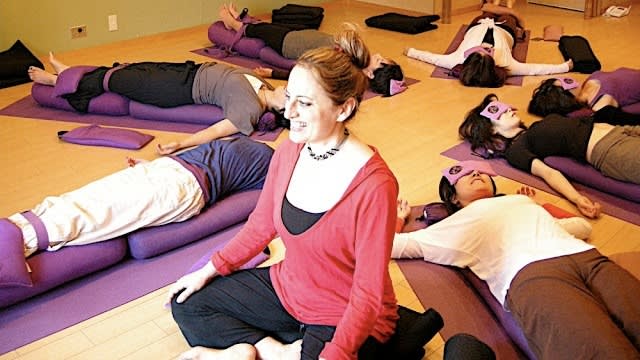 Lucrative teacher-training programs are turning out graduates faster than studios can find new students. But the quality of newly trained teachers varies enormously. 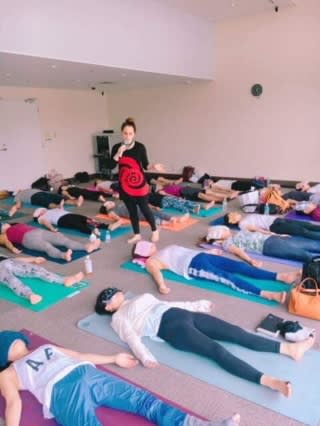 Lowitz guides a class through a relaxation exercise at a yoga festival in Yokohama. (Courtesy of Leza Lowitz)

"Many yoga studios are doing this for commercial purposes, and the quality of the instruction is not good," said Lowitz, who does not provide teacher training at her studio. Often, yoga teachers can teach only basic poses, so they "have nothing special to offer to students," she added.

Still, the experience of the past few years has shown that independent studios can prosper if they offer the right products, said Toyoura, perhaps the industry's most successful independent entrepreneur, who thinks the growth of chains such as LAVA will eventually saturate the market.

"Smaller yoga studios offering different and unique courses with good quality teachers will survive, [but] others are likely to disappear," he said. And that, according to Toyoura, means only the fittest can survive.

"Even large chain yoga studios will struggle amid rising rents at the best locations and declining student numbers due to quality issues with teachers. The fancy ones are no exception," he said.