COVID-19 threatening the viability of a cherished heritage craft 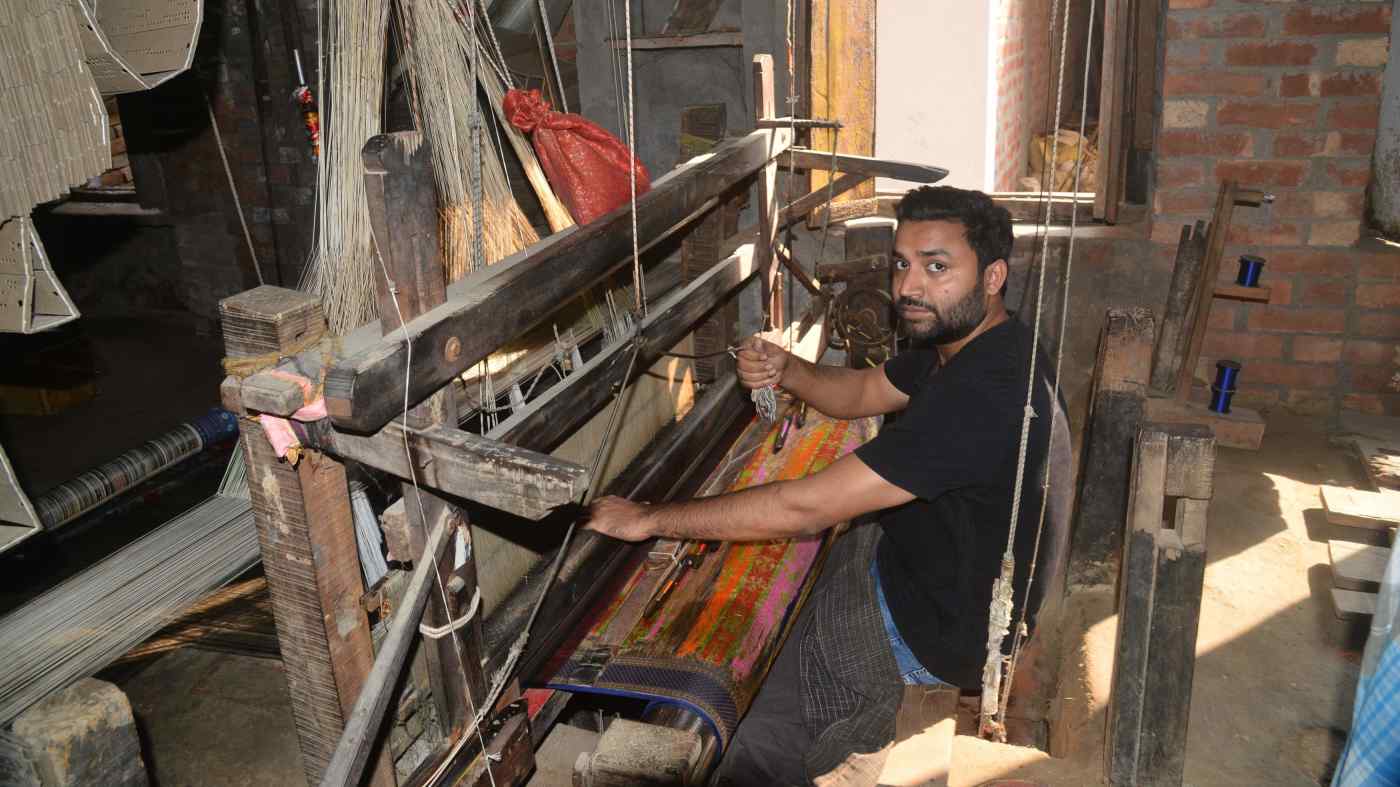 Hanging unwoven for more than six months, Mustafa runs his fingers along the listless threads each morning. He has not earned a single rupee since the day in March when India's Prime Minister Narendra Modi announced a lockdown to control the COVID-19 pandemic.

"We were weaving saris in all 15 handlooms before the lockdown," says Mustafa, a third-generation weaver in Varanasi in the north Indian state of Uttar Pradesh. "After the lockdown, all orders were canceled."

His savings spent, Mustafa, 30, sees little hope of getting work anytime soon. He estimates his losses at over 2 million rupees ($27,000) since the onset of the coronavirus pandemic in India.

One of the estimated 50,000 handloom weavers in Varanasi, famous for its location on the banks of the sacred Ganges river -- Modi's parliamentary constituency -- COVID-19 has robbed the city's mostly Muslim weavers of their livelihood.

According to Rajan Behal, general secretary of the Banarasi Vastra Udyog Association, which represents Varanasi's sari weavers, only 10% of the city's 40,000 handlooms have begun operating again since the lockdown was lifted in July. A third-generation weaver, Mustafa, 30, estimates his losses so far at over 2 million rupees. (Photo by Mohammad Muqeed)

In a sector run largely on credit, Behal estimates that over 95% of the saris bought from wholesalers before the lockdown are lying unsold across the country. "Our money is blocked, so we are not able to pay the master weavers," says Behal.

With Varanasi's weaving industry generating about 50 billion rupees (US$677 million) in a normal year, Behal expects the industry to generate only a fifth of that this financial year. Facing such huge losses, Behal says the heritage handloom craft of Benarasi saris could soon become extinct.

Composed of two interlacing silk yarns, it can take up to six months to weave an exclusive six-yard long Benarasi brocade silk sari, especially if the weaver is using the "kadhua" technique in which each motif is woven separately, with no loose threads kept at the back of the fabric.

The art of weaving silk brocades began in Varanasi -- or Benaras, as it used to be called -- during the Mughal period in the 14th century. Local weavers are thought to have acquired the skill of brocading from Iranian craftsmen who arrived in the wake of the Mughal invaders. A classic motif used in Benarasi brocades is a hunting scene, often with men on horseback or elephants pursuing deer and tigers. More modern designs now seen on Benarasi saris include flowers and other types of foliage.

With their intricate design and opulent embroidery, handwoven Benarasi saris have a timeless appeal and can sell for up to 200,000 rupees each. 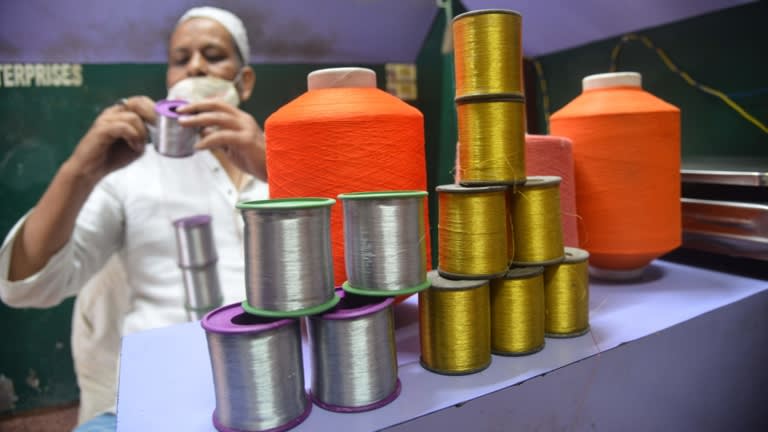 Top: Akhtar Ansari at his haberdashery in Varanasi. Prices for gold and silver thread have almost doubled during the pandemic. Bottom: It can take up to six months to weave an exclusive six-yard long Benarasi brocade silk sari, especially if the weaver is using the "kadhua" technique in which each motif is woven separately. (Photos by Mohammad Muqeed)

An essential part of a traditional Hindu bride's trousseau -- especially in northern and eastern India -- sales of Benarasi saris have plummeted since COVID-19 brought India's wedding industry to a virtual standstill. Exports of Benarasi saris -- which usually generates around $110,000 annually -- has also come to a halt.

Naseem Ahmad, a national award-winning master weaver in Jaitpura in Varanasi, says orders worth 1.5 million rupees have so far been canceled, with only five of his 10 handlooms now operational. His monthly income has been reduced to 10,000 rupees, compared to 40,000 rupees a month before the lockdown.

A sharp increase in the cost of raw materials has also hit the industry, with the price of a kilogram of pure gold thread almost doubling to around 80,000 rupees. The price of pure silver thread has also risen to around 75,000 rupees a kilogram. "We are forced to use cheaper artificial powder available at 8000 rupees for a kilogram," says Ahmad.

While the central government says it is providing some support in the form of marketing and branding through the acquisition of Geographical Identification for certified Benarasi brocade saris, weavers themselves say they are bleeding financially.

Nalini Kant Singh, a district magistrate for supply in Varanasi, says the government has also been distributing food packets to all ration cardholders including weavers. Finance department officials say free food rations are also being provided to people without ration cards. Benarasi saris on display this week at an exhibition in Varanasi in the state of Uttar Pradesh. The ancient city is the Lok Sabha constituency for India's Prime Minister Narendra Modi. (Photo by Mohammad Muqeed)

But the weavers, who mostly live in dilapidated houses in Varanasi's Jaitpura, Peeli Kothi, Lallapura, and Bajardiha neighborhoods, say few weavers have received any such help.

In mid-April, says master weaver Ateeque Ansari, the local administration gave him about 7,000 packets containing flour, gram flour, rice, and lentils to distribute among other weavers, but he has received no other provisions since then.

"I wasn't part of any protest, yet police picked me up," says Mahtab Alam, 21, who was arrested and kept in custody for two days. When his case was thrown out of court, Alam resumed work in February after fixing the handloom that he says was vandalized by the police who arrested him. Work came to a halt again soon after when the lockdown was announced.

Apart from the financial losses caused by COVID, many Muslim weavers say they have been battling ongoing regressive policies ever since Modi's Hindu nationalist Bharatiya Janata Party took power in 2014. Other policies such as the botched 2016 banknote demonetization, and the introduction of a Goods and Services Tax a year later have compounded losses for the handloom sector, they say. An essential part of a traditional Hindu bride's trousseau, sales of Benarasi saris have plummeted after COVID-19 has brought India's wedding industry to a virtual standstill. (Photo by Mohammad Muqeed)

Then there is the inevitable competition from mechanized power looms, which have gained in popularity over the last 15 years following the introduction of government subsidies for electricity. Power looms take only three days to produce a sari that would take 15 days to weave on a handloom. "Power looms waged a war within the community, killing handlooms," says master-weaver Ahmad.

In the end, the COVID lockdown seems like it could be the final nail in the coffin of a cherished heritage craft. "Unless the government help in the form of cash and subsidies reaches us, handlooms will go extinct," says Ziyaul Mustafa.