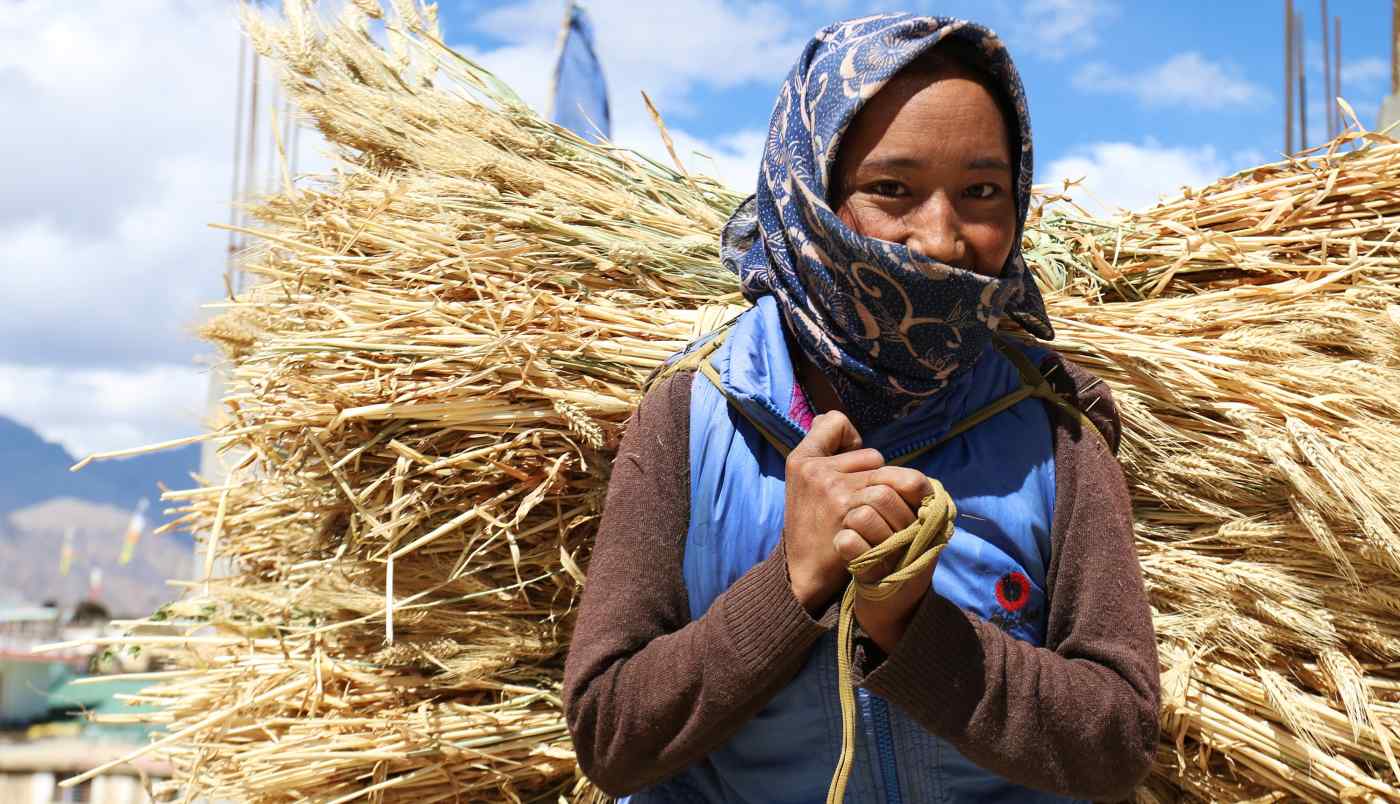 KAZA, India -- "There are more cars than potatoes now" sighs Chhering Angrup, slowly turning a prayer wheel below a framed portrait of the Dalai-Lama at his home in Kaza, the main town of the Spiti valley.

Now in his late 70s, the stocky, leather-skinned Angrup was born in Tashigang, a hamlet 20 km above Kaza, when the British ruled Spiti, a high-altitude desert in the North Indian state of Himachal Pradesh.

Sandwiched between Tibet and the rest of India, and surrounded by the Himalayas, the valley was isolated for centuries, inaccessible except by foot. But times are changing fast as telecommunications, roads, tourism and climate change transform relations with the outside world, tempting young people to leave and threatening the future of the area's distinctive way of life.

"When we were young, we walked across the Kunzum Pass and the Rohtang Pass to Manali [now a high-altitude Himachal Pradesh resort town] with a pony, to buy supplies for the winter," Angrup said. "It took me six days each way."

For two decades after Indian independence in 1948 Spiti was rarely visited by outsiders. That began to change following the construction of a road across the high passes in the early 1970s, in the wake of border conflicts with China. The military moved into the border areas and quickly created more infrastructure, even though that first road is open only from June to October. Once the only option was to walk; these days tourists travel to the Spiti valley by car or motorbike. (Photo by Laure Siegel)

For two decades after Indian independence in 1948, Spiti was rarely visited by outsiders. That began to change following the construction of a road across the high passes in the early 1970s, in the wake of border conflicts with China. The military moved into the border areas and quickly created more infrastructure, even though that first road is open only from June to October.

Electricity arrived only in 1984, but 4G mobile telephony is expected to become available next year.

Religion remains a driving force in the valley, which is home to about 2,000 Buddhist monks and nuns. Spiti is the only place in the world where Tibetan Buddhism has flourished continuously for more than 1,000 years, and the Dalai Lama has been a regular visitor since the early 1970s.

Lochen Tulku, head of the picturesque and fortress-like Key Gompa monastery and the valley's de facto spiritual leader, said he is confident that Spiti can resist the decline of Buddhism that has affected many other Himalayan areas. "Along the entire Himalayan range, the number of monks and nuns joining monasteries is declining as parents send their children to public Hindu schools because they want them to be competitive," he said. "Here, every family still sends a son, as well as more and more daughters, to the monastery, where they will be fed and educated."

Family life remains largely traditional. Inheritance is based on primogeniture, and polyandry (women taking two or more husbands) is still practiced. "Life is organized like this because of land scarcity," said Tulku. "Families need to avoid dividing their properties into ever smaller plots. We help young monks understand that they need to preserve their culture, while giving them a general education so they have a chance to function in the globalized world."

One of the most dramatic aspects of the valley's transformation is the effect of climate change on local agricultural practices. Barley, once the most common crop here, is disappearing from terraced fields, replaced by more profitable crops such as green peas and apples, which are favored by the state government and more suited to the warming climate.

Angrup's son Skalzang Dorje, who left Spiti in 1986 to study in New Delhi, said snowfall and water resources had declined by the time he returned in 2000. "It's getting warmer; that's why the apple orchards are creeping higher and higher," he said. "Right now people are earning money, but we are not sure if this type of horticulture is sustainable while resources keep shrinking." Kaza, the valley's main town and administrative center, with the Sakya Tangyud Monastery in the foreground; the monastery was inaugurated in 2009 by the Dalai Lama. (Photo by Tom Vater)

Tourism is also creating major challenges, simultaneously bringing prosperity and undermining the old way of life since the Indian government began to allow foreigners to travel to the valley in 1992. "My father started one of the first homestays in our mud house when Spiti opened to foreigners," said Chhering Bodh, who runs the Sakya Abode guest house and a travel agency in Kaza.

"In the early days, there were only a few dozen tourists a year," Bodh said. "Most visitors were Europeans with special interests -- we hosted geologists, photographers and writers. The Kalachakra, a Buddhist event in Tabo, attracted the first group of international travelers in 1996. Four years later, the same event at Key monastery, attended by the Dalai Lama, triggered a real influx of visitors."

Foreign tourists are still required to apply for a special permit from the state government if they want to explore the entire valley -- the road passes close to the sensitive Indo-Chinese border. But Indian citizens do not require a permit and domestic visitor numbers have skyrocketed in the past five years, thanks to the rise of social media.

Guest houses and cafes have been mushrooming across the valley. Tabo, about 100 km southeast of Kaza, is one of the valley's wealthiest villages, famous for its 1,000 years old monastery, the oldest in South Asia. Young monks at Tabo monastery practice a traditional religious dance as part of their training. (Photo by Laure Siegel)

Rana Vaneet, an entrepreneur from Shimla who has leased two village properties and turned them into hotels, said tourist numbers have mushroomed.

"Three years ago, 100 tourists a year came to Tabo, now it's 100 a day," he said. "India's middle class favors new experiences, and phenomena like vlogging make an impact on young travelers."

Bodh worries about this frenzied activity. "The private sector wants to build more hotels and the government pushes for higher-end tourism, but what's the point if water and electricity are scarce and waste management is not properly organized in such a fragile, eco-sensitive place?" he asked.

Karanbir Singh Bedi, a young entrepreneur from Chandigarh, who opened The Deyzor, a boutique hotel in Kaza, 10 years ago, calls for responsible tourism. "In 2000, there was one place to eat, one to make a phone call and the trekking groups came on foot. Now everybody comes by car or on [Indian-made] Royal Enfield motorbikes," he said. Terraced apple orchards have sprung up throughout the Spiti valley over the past decades. (Photo by Laure Siegel)

There is no lack of suggestions for positive change. Ishita Khanna, cofounder of Ecosphere, a social enterprise promoting sustainable development, is campaigning for better water conservation to help traditional agriculture and tougher planning rules.

"Tourism is boosting the economy, but as a consequence, haphazard concrete hotel construction has been replacing local mud houses," she said. "We are pushing for norms to help preserve traditional architectural styles."

In August, Ram Lal Markanday, a member of the Himachal Pradesh Legislative Assembly for Lahaul-Spiti, mooted restrictions on visitor numbers, once a much-delayed tunnel under construction from Manali into Lahaul is completed.

But others say that Spiti's future is inextricably bound up with modernization and commercialism. "Spiti is one of the harshest places to live in the world -- farming here is 10 times harder than on the Indian plains," said Rana Sidhu, owner of Chandigarh-based Go Adventure Sports, who has been running tours into the valley for more than a decade.

"Tourism is a very new phenomenon, so people are busy making money for the moment, and who can blame them?"