Ladakh will benefit from split with Kashmir, but tourism must be sustainable LEH, India -- For the people of Ladakh, a former Buddhist Himalayan kingdom wedged between Pakistan and China in India's remote far north, Halloween from now on has taken on a whole new meaning.

On Oct. 31, India split the disputed former state of Jammu and Kashmir in half, with Ladakh becoming one of two new union territories administered by the federal government. Ladakh, which has been generally peaceful since Indian independence in 1947, is the subject of territorial claims from both Pakistan and China, which occupied the Aksai Chin plains, formerly part of eastern Ladakh, in 1962.

The division of Jammu and Kashmir opens the prospect of a new start for Ladakh, which has significant Muslim, Buddhist and Hindu communities, but it may also expose the territory to a new and destabilizing phenomenon -- investment by companies and people from outside the area. When I visited in October, rumors were circulating about the likely construction of 30 Carnival Cinemas multiscreen theaters across the two new territories, with five in Ladakh.

Local control is important to many in Ladakh, which lost its historical role as an important strategic location at the crossroads of north Asian trade routes when China closed its borders with Tibet and the Xinjiang region in the 1960s. Since 1974, the Indian government has actively encouraged tourism, which has expanded greatly since a 2009 Bollywood blockbuster called "3 Idiots" put the area on the radar for domestic travelers. 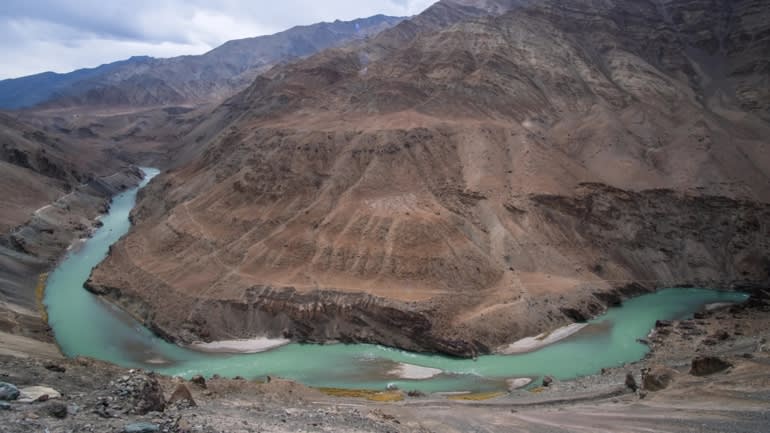 Top: Like in many of Ladakh's Buddhist monasteries, a statue of the Shakyamuni Buddha welcomes visitors to the Diskit Monastery in the Nubra Valley. Bottom: Ladakh's barren mountainous scenery and turquoise bodies of water are a playground for adventurous travelers. (Photos by Kit Yeng Chan)

"India has a huge population, and year after year more people discover Ladakh on social media," said Ken Agrawal, CEO of Unplugged Life, a tour operator that specializes in bespoke trips to the region. Agrawal, who hails from the western Indian state of Maharashtra, is one of many travelers who have fallen in love with Ladakh's mountains. "Most Indians want to visit Ladakh at least once in their lifetime," he said.

But mass tourism poses serious challenges for Leh, not least because of its altitude. The capital is located above 3,500 meters, and the main tourist season is limited to the period from mid-May to mid-October, when the area's high mountain passes are open to traffic and the weather is warmest. At other times, the city's two links with the outside world -- a 434 km highway to Srinagar and a 490 km road to Manali -- are blocked by snow, maintenance, or temperatures that can plummet to -25 C.

"Tourism opportunities are ripe but very limited here, so one must survive for the rest of the year on whatever income he has made in those crucial four to five months," said Chamba Rinchen, CEO of Ladakh With Chamba, a transportation and tour service provider in Leh. 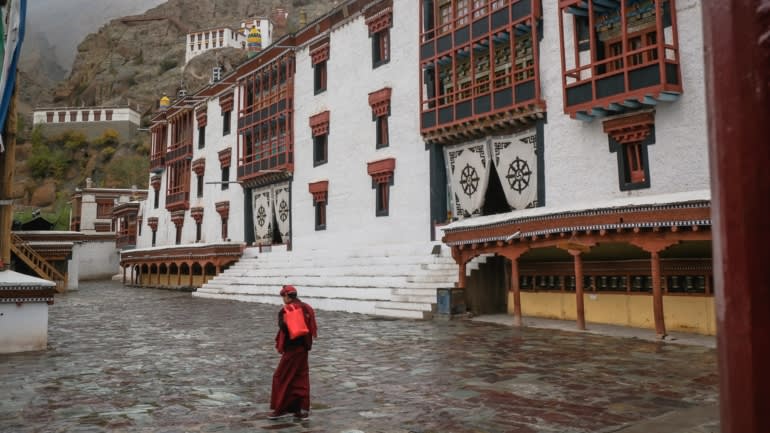 Top: Ken Agrawal of Unplugged India has turned his love for Ladakh into a profession. Bottom: A monk crosses the main courtyard of the Hemis Monastery, one of Ladakh's most important monasteries and home to a popular annual festival that packs hundreds of tourists. (Top photo courtesy of Unplugged India, bottom photo by Kit Yeng Chan)

It is too early to say what impact the new union territory status will have on tourism in Ladakh. "Everyone is confused because other union territories -- like Goa, or Daman and Diu -- were formed in 1966, and those areas are so different from here. ... We still have a long way to go," said Phuntsok Angdu, a local government official.

Amid a dearth of hotels, Angdu's wife Disket Lanzes is among a number of local entrepreneurs who have responded to the tourist influx by offering accommodation in their homes. Her upscale guest house, ambitiously named Adu's Eternal Comfort, is set inside a gated compound graced by a relaxing garden lined with poplar trees, with large rooms and facilities usually found in much more expensive accommodation.

Like Disket, most local tour operators are optimistic. "We don't know yet what type of laws are going to come in, but I'm personally very happy that Ladakh is now its own [area] on the map," said Chamba. "It's important to be seen as separate from Kashmir, to give people the peace of mind they need when traveling, and in turn, help tourism increase." 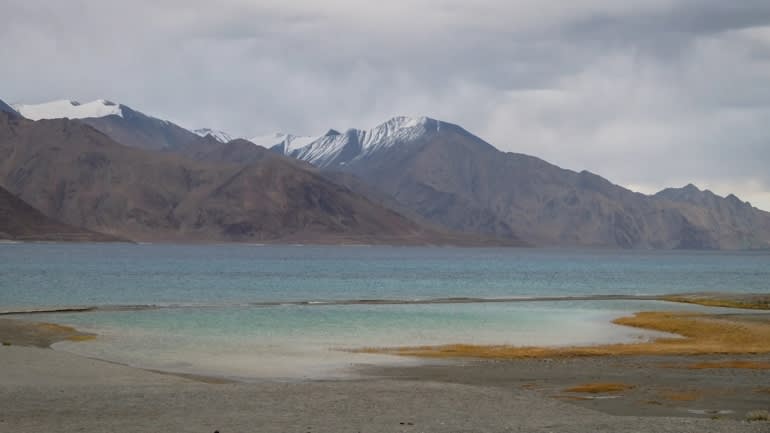 Visitor numbers declined significantly in summer 2019, with hotel occupancy falling to an average of 45% in June, compared with 90% in the comparable month of the previous year. The late opening of the Rothang Pass on the Manali-Leh Highway was a contributing factor, but the main issue was fear of violence generated by India-Pakistan skirmishes in Kashmir.

Locals hope that the separation of Ladakh from Jammu and Kashmir will address fears among potential tourists of becoming caught up in any India-Pakistan confrontation, encouraging more travelers to experience the area's rapid improvement in tourist facilities.

"The standard of accommodation is improving year by year," said Agrawal, who patronizes several local properties, supporting locally owned businesses. "You can now find a wide range of rooms from 700 ($9.74) rupees to over 70,000 rupees a night, especially in popular spots like Leh and the Nubra Valley," he said.

Exemplifying the new trend is Stone Hedge Hotel, a boutique property in the village of Hunder in the Nubra Valley, where a long stretch of sand dunes forms one of Ladakh's tourist hot spots. The property mixes a stylishly stark, contemporary approach with local history and natural materials such as stone and mud. Stone Hedge Hotel in the Nubra Valley is among a new generation of luxe boutique hotels that cater to a rising number of business travelers to the region. (Photo by Kit Yeng Chan)

"The luxury tourism sector in Ladakh is no longer a niche or underdeveloped market," said Stone Hedge Hotel's owner Stanzin Tsephel. "Thanks to the region's abundant sun, mud, stone and unique culture, going green and local is not just a marketing slogan, but the direction in which we are moving."

Some of Ladakh's historic palaces have also been transformed into lavish heritage stays, where visitors can bask in the region's unique Himalayan Buddhist history. The Stok Palace Heritage Hotel, built in 1820 as a summer residence for the Namgyal royal family, dominates a barren valley near Leh that is strewn with stupas (domed shrines) and golden Buddha statues.

Six of the palace's 77 original rooms have been renovated to provide guest suites without altering the original furnishings or wall paintings. A dedicated museum showcases precious thangkas (Buddhist paintings) and a collection of royal clothes and objects. 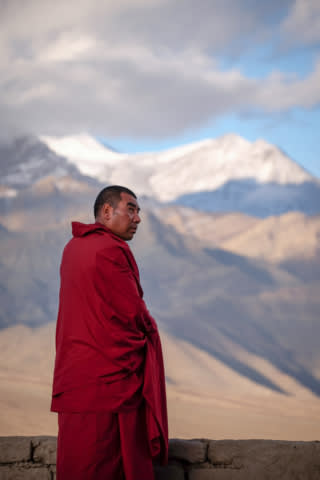 A monk contemplates the sunrise on the roof of the Thiksey Monastery, Ladakh's most important gompa of the Gelugpa sect of Buddhism, 16 km south of Leh. (Photo by Kit Yeng Chan)

"Tourism in Ladakh is at a point where mass tourism is not going to help the fragile economy system -- hence the need for luxury tourism, agricultural tourism and various focused group tourism products like architecture tours," said Aditya Mukharji, general manager at the Stok Palace Heritage Hotel.

For Ladakh, though, it is not just the economy that is at risk. "I don't think that embracing tourism will affect the local culture, which is very closed and self-protective, but the environment could be at stake," said Agrawal. Ladakh's water supplies depend on the size of its glaciers, which are threatened by climate change and may not be able to support higher numbers of visitors.

Other threats include a possible increase in tourist trash such as plastic waste -- the region has no proper rubbish management system in place -- and the growing use of diesel-powered cars to overcome the area's limited public transport infrastructure.

"Truth be told, Ladakh is a very delicate ecosystem," said Agrawal, "and without proper [local government] control and sustainable tourism going forward, its own natural wealth could be destroyed very quickly."