Indonesia and Thailand in slow race for digital nomad visa

Despite trend toward remote working, Asia has yet to seize on opportunities Digital nomads stay overseas for longer than periods regular leisure tourists, offering potentially lucrative rewards for countries that can find a way to host them -- and tax them -- without scaring them away to other locales. (Photo by Ian Neubauer)
IAN LLOYD NEUBAUER, Contributing writerApril 8, 2021 08:30 JST | Thailand
CopyCopied

BANGKOK -- In August last year, Estonia, the Eastern European digital powerhouse that gave the world Skype, introduced the world's first visa for digital nomads -- a loose group of remote workers and freelancers who travel the globe and earn a living anywhere as long as there is fast and reliable internet connection.

Two months later, Dubai followed suit with a digital nomad program, while Croatia introduced new legislation and 12-month visas for digital nomads this year. Four Caribbean Island nations -- Barbados, Bermuda, Anguilla and the Cayman Islands -- have also joined the bandwagon in a bid to attract members of the most lucrative and fastest-growing migrant worker trend of the digital era.

Digital nomads stay overseas for longer periods than regular leisure tourists, and, even during the pandemic, the market is growing. In 2018, 4.8 million Americans identified as digital nomads in a survey by MBO Partners, a platform that matches freelancers with projects. When the survey was repeated in 2019, 7.3 million Americans said they would joined the club, a 52% increase.

According to Global Workplace Analytics, the remote workforce has increased by 140% since 2005, with no sign of tapering off. Pieter Levels, who runs the destination ranking site nomadlist.com, has projected that the global population for this segment will reach one billion by 2035.

There are around 2 million freelancers in the U.K., according to the Association of Independent Professionals and the Self Employed. While official figures for East and Southeast Asian nations do not exist, it would be fair to estimate that the region is home to tens of millions of freelancers, based on the vast population in the region. Asia is also the destination of choice for digital nomads from the West.

Chiang Mai in northern Thailand has been a digital nomad hotspot for years with co-working and conference spaces, social network and support services, and even educational courses on how to make money as a digital nomads. Combining modern infrastructure, exotic Eastern culture, heady nightlife and cheap delicious streetfood, Bangkok, Taipei, Seoul and Phnom Penh have also emerged as hubs for remote workers. 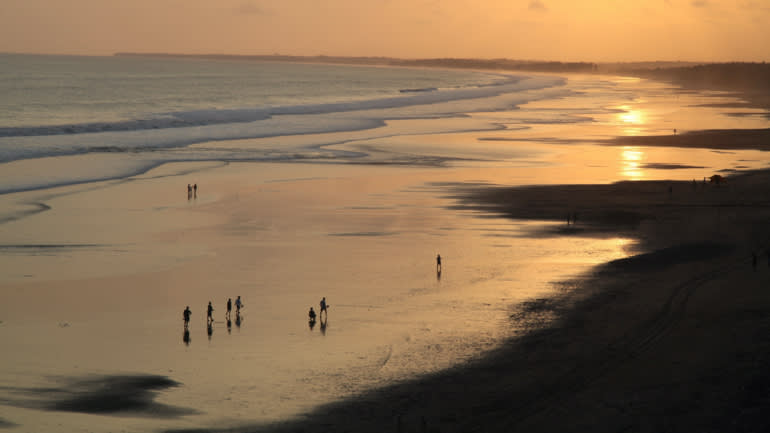 Combining modern infrastructure, exotic Eastern culture, heady nightlife and cheap delicious streetfood, and already home to tens of millions of freelancers, Asia is the destination of choice for digital nomads from the West. (Photos by Ian Neubauer)

In Indonesia, the rapidly urbanizing surfing village of Canggu on Bali's west coast is consistently rated one of the world's most attractive destinations for digital nomads by NomadList.com, a website that compares more than 2,300 destinations. It is from the island's popularity for remote workers that the term "Silicon Bali" was coined.

"Canggu is often ranked number one because of its low cost of living -- $1,373 a month -- the weather is pretty good, there's fast Wi-Fi, it's safe and lots of fun with nightlife, restaurants, fashion and yoga," said the Dutch founder of Nomad List Pieter Levels who said he earned up to $1 million per month from advertising on his website before the pandemic.

COVID-19 may have dampened the digital nomad movement for now, given travel restrictions and quarantine requirements, but the pandemic has also paved the way for a bigger move toward working away from the office.

Yet, not a single Asian nation has seized on this trend to introduce a dedicated digital nomad visa to capitalize on the economic benefits of attracting such a population. Instead, most digital nomads in the region have existed in grey areas of the law by using short-term tourist visas that technically prohibit them from doing any kind of work.

A tourist working "illegally" or in the grey area as a digital nomad in a third country can often get away with paying no tax at all. While Americans are required to pay tax in the U.S. no matter they are living and irrespective of whether they pay tax in their host country, Australians can opt to pay tax only in the country they are living in. Germany offers a freelance visa that requires foreign workers to pay tax to the state. By creating a digital visa, countries such as Thailand and Indonesia stand to gain from the income tax receipts of digital nomads.

"Many already live in areas like Bali, and Lombok, in guesthouses, hotels, frequenting local restaurants, entertainment venues, and leisure activities for months at a time," said Wahyu Taufiq, director of Selaras Group, a law firm and investment consultancy in Bali. " This translates into tremendous economic impact especially in smaller cities and islands in Indonesia that need it the most."

Yet, he said: "Although their presence has become commonplace and beneficial, they have no legal status to work digitally and often face ambiguity."

But the winds are slowly changing in Indonesia. Speaking at a virtual event last year, Coordinating Minister for Maritime Affairs and Investment Luhut Pandjaitan said: "Foreigners who are experts in technology or IT, they [can] work from Bali... we are already pushing for this. It's just the regulation aspect we're working on."

Indonesia's Tourism and Creative Economy Minister Uno Sandiaga is also pushing for a digital nomad visa. In January, he began dividing his time between the capital Jakarta and Bali -- and is encouraging others to do the same. "I want to invite business people and other professionals to start considering working from Bali," the minister said.

But Taufiq believes the country's lawmakers are not working fast enough. Late last year he launched an online petition on Change.org that has already attracted 3,000 signatures to nudge them.

At the core of Taufiq's petition is the claim that digital nomads from abroad can teach specialized skills to locals. "Many locals on Indonesia's islands rely solely on tourism-related services for their income and sustenance," he said. "Since digital workers have skills they can teach to locals to help them create additional income, a specialized visa will allow this more symbiotic connection to occur." Indonesia's Coordinating Minister for Maritime Affairs and Investment Luhut Pandjaitan said: "Foreigners who are experts in technology or IT, they [can] work from Bali... we are already pushing for this. It's just the regulation aspect we're working on." (Photos by Ian Neubauer)

The tech entrepreneur is also putting his money where his mouth is. He recently invested in DIYacademy.org, a nonprofit organization that pairs Indonesian students keen to learn digital skills like coding and graphic design with digital nomads based in Bali and the Javanese city of Yogyakarta.

Michael Craig, a software developer from Australia who opened Dojo Bali, the island's first dedicated co-working space for digital nomads in Canggu in 2015, agreed with Taufiq. "A digital nomad visa where you're responsible for up-skilling or employing a local where you have cross-cultural exchange and learn from each other - that's how to make a real Silicon Bali," he said.

But as Indonesia continues to drag its feet, Thailand is inching toward becoming the first Asian country to introduce a digital nomad visa.

In December, the Centre for Covid-19 Situation Administration approved a proposal by the Thailand Board of Investment to allow freelancers to work remotely in the kingdom for up to four years under the existing "Smart Visa" program.

Introduced in 2018 to "enhance Thailand's attractiveness in drawing science and technology experts, senior executives, investors and startups," only around 500 foreigners have successfully applied for Smart Visas.

But if the new Smart Visa proposal is approved by the Thai cabinet this year, the program will doubtlessly come much closer to meeting its lofty objectives.

"The influx of talent will create a talent pool in the country," said Board of Investment Deputy Secretary-General Narit Therdsteerasukdi.