LABUAN BAJO, Indonesia -- The traditional phinisi vessel -- a twin-mast, seven-sail schooner with elongated bowsprits -- once humbly traveled around the 17,504 islands of the Indonesian archipelago transporting people and cargo, going on raids or catching fish. Now they are enjoying a revival as luxury boats for high-end tourists.

The original wooden design of the phinisi has been attributed to the seafaring Bugis people of South Sulawesi and predates the arrival of European colonial ships in the 16th and 17th centuries. "Knowledge of the technology of making boats with the formula and pattern of hull preparation has been known for at least 1,500 years," said a spokesperson for the Ministry of Education and Culture when the phinisi was designated in 2017 by UNESCO as an Intangible Cultural Heritage item.

Now a new breed of luxury phinisis are being built by hand on the beaches of South Sulawesi by descendants of the Bugis people, who have passed down their unique shipwright skills from generation to generation. The owners are European, American or Asian "lifestyle investors" who outfit the vessels with top-shelf marine systems, fittings and furnishing plus rock-star features like jet-ski bays and advanced electronic lighting to attract night-feeding whale sharks and manta rays. Owners typically spend two to four weeks a year sailing around Indonesia with family and friends and then lease them as private charter vessels the rest of the year.

There is a lot to love about phinisis, said Raul Boscarino, a shipwright from Italy and expert on the construction of the vessels. He has built eight in the past 15 years, including two of his own -- Mantra and Leyla.

"Phinisis are attractive for investors because they're relatively cheap," Boscarino explained. "A boat like Leyla costs about a million dollars to build. But importing a fiberglass yacht or catamaran of the same size would cost four or five times that much because any boat you bring into Indonesian waters for commercial purposes gets hit with a 75% luxury tax." Mischief, which charters for $8,500 per day, is an example of a new genre of rule-breaking "mastless" phinisi.    © Courtesy of Mischief

With an air-conditioned lounge, four en suite cabins that can accommodate up to 10 adults in comfort, a fully equipped kitchen, dinghies, kayaks and indoor and outdoor dining areas, Mantra and Leyla are essentially floating boutique hotels. The two 33-meter dive boats divide their time between the UNESCO World Heritage-listed Komodo National Park, the Spice Islands and Raja Ampat in Papua Province, home of the richest marine biodiversity on earth.

With 10 staff members on each boat, including two butlers, a master scuba diving instructor and a chef versed in Indonesian and Mediterranean cuisine, the only things guests lift during a cruise are beer bottles to their lips.

All this luxury does not come cheap. Mantra and Leyla charter for $3,150 per day, although that is below the market average. Lamima, the world's largest working wooden yacht at 65 meters, charters for $20,000 per day. It has 20 staff members, including two Balinese masseuses who offer al fresco rubs on teak decks cooled by tropical breezes. Guests can also request private barbecues on deserted tropical islands, with an advance party decorating the beach with ceremonial arches made from banana leaves and depositing buckets of Champagne on ice. "When a guest disembarks from a jet ski in their swimwear they are king of the island. Can you imagine how that feels?" says Lamima co-owner Dominique Gerardin. "It's Robinson Crusoe with yellowfin ceviche for dinner."

In the middle range of the market is Mischief, a 30-meter vessel with a Hamptons-style bar and rooftop cinema that charters for $8,500 per day. Built by Boscarino, Mischief is an example of a new genre of rule-breaking "mastless" phinisis where the cabins, normally built inside the hull, are set in superstructures built above deck.

"By taking the masts out of the equation we were able to increase internal space and deliver better guest experiences," says co-owner Julian Brownlie. "We have four chill-out spaces that allow couples to spend more time outside of their cabins without being in anyone's space." Lamima comes with a staff of 20, including two Balinese masseuses who offer al fresco rubs on teak decks.   © Courtesy of Lamima

There are 277 twin-mast phinisis registered for commercial activity with Indonesia's Ministry of Maritime Affairs. Shipwrights in South Sulawesi currently produce about 10 new phinisis a year, up from only two per year a decade ago. But demand is still exceeding supply.

Marine-based tourism, which accounted for about 10% of the 15.8 million foreign tourists who visited Indonesia in 2018, has more than doubled in the last 15 years, buoyed by Indonesia's burgeoning middle class. Growth continues to accelerate on the back of new initiatives like the extension of Indonesia's visa-free policy to most foreign visitors and the promotion of new resort areas, such as Labuan Bajo on Flores Island, which the government has designated as the first of "10 new Balis" in an effort to replicate Bali's stellar economic success.

Boum Senous, co-founder of Yacht Sourcing, a Bali-based yacht broker and management company, said that the current phinisi fleet of less than 300 vessels is "very small for a country the size of Indonesia. If you compare it to Thailand, during the high season they have more yachts in the Similan Islands -- one destination -- than we do in the entire country." 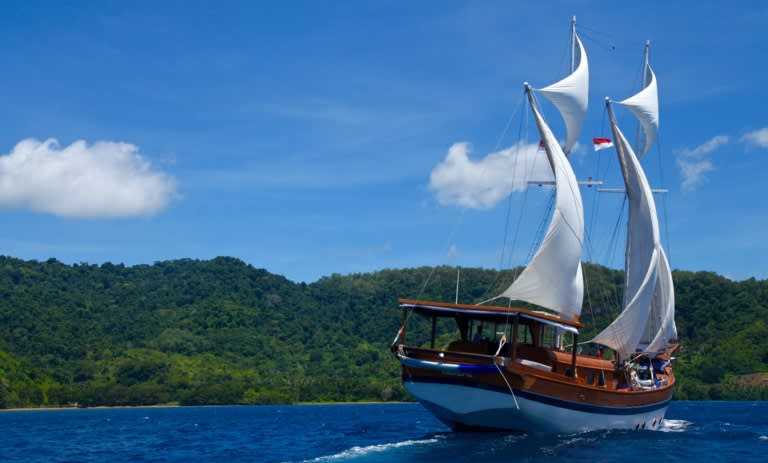 Mantra, like Leyla, charters for $3,150 per day and can accommodate up to 10 adults in comfort.     © Ian Lloyd Neubauer

But that problem may soon be solved. "The Indonesian government has realized the shipbuilding industry cannot keep up with the tourism influx, so they are about to remove the 75% luxury tax that applies to imported foreign vessels," Senous said. "As a result, the market for high-end yachts in Indonesia will be saturated within two or three years."

But will that stymie demand for new phinisis and send wooden shipbuilding in Indonesia back to the brink of extinction? Frank Thoma, a German developer who owns a 25-meter phinisi and is building a resort community with a marina close to Labuan Bajo called Kokotuku, thinks not.

"You can sail on a modern boat anywhere in the world, but Indonesia and the south of Turkey are the only places in the world where you can cruise around comfortably in a big wooden yacht. But the islands of Indonesia -- they're much more beautiful."