MAKASSAR, Indonesia -- The atmosphere in the waiting room at the port is heavy with silent anticipation. Nearly 100 people of all ages look wearily at the open sea stretching beyond the glass wall ahead. They are waiting for the Dobonsolo, one of the nation's remaining fleet of affordable long-distance ships, still popular with many locals, despite long journeys, delays, congestion and the rise of budget carriers.

The Dobonsolo, bound for West Papua, is eight hours late. Some of the passengers already look exhausted after the long wait, sitting around piles of battered suitcases and cardboard boxes reinforced with masking tape. And from the port of Makassar, one of the operator's main hubs, it will take them up to another five days at sea to reach their far-off homes or new business prospects.

The ship is operated by Pelayaran Nasional Indonesia (Pelni), or Indonesian National Lines, founded on April 28, 1952, to counter the monopoly of Dutch-run shipping company KPM (Koninklijke Paketvaart-Maatschappij). State-run Pelni is Indonesia's -- and one of the world's -- last remaining long-distance passenger ship operators.

The company's 28 vessels still crisscross the entire length of the Indonesian archipelago, connecting almost 100 ports nationwide. One of the longest Pelni routes departs from the capital Jakarta, on the island of Java, to Jayapura, West Papua: The week-long, 4,390km journey is comparable to the distance between London and Herat in Afghanistan -- and to some working-class Indonesians, is just a necessary traverse to reach home.

As a black dot appears on the horizon, someone in the front-row seats cheers "Kapal!" meaning "ship." The crowd leaps into action as if a starting pistol has been fired, their voices growing louder as they queue to pass ticket inspection and see the shape of the Dobonsolo, heavily laden with cargo containers and a multitude of souls, slowly move into Makassar's port.

This scene is a daily ritual in port towns across Indonesia. With no onerous luggage restrictions, Pelni ships are crucial in connecting people and businesses throughout the archipelago's far-flung islands and offer a unique insight into the lives of ordinary Indonesians. Porters help passengers and businessmen load up their luggage and cargo when the Pelni ships are docked in port. (Photo by Kit Yeng Chan)

Before the late 2000s and the consolidation of low-cost air carriers in the region, state-run Pelni shuttled up to 8 million passengers per year. It was particularly instrumental during the period of former strongman leader Suharto's Transmigration Program in the 1980s and 1990s -- a time when air transport was either too expensive for ordinary people, or simply not available. The program saw ships move migrants from overpopulated areas of Java to other remote islands that could offer them a better life and work opportunities.

But by 2013, Pelni's estimated passenger numbers had fallen to only 3 million per year; in 2014, the company was sustained by a government subsidy of $80 million. But, regardless of the recent rise of budget airlines in Indonesia, by the end of that year, Pelni had made $500,000 in profit, safeguarding its status as the national carrier of the rakyat ("everyday people"). 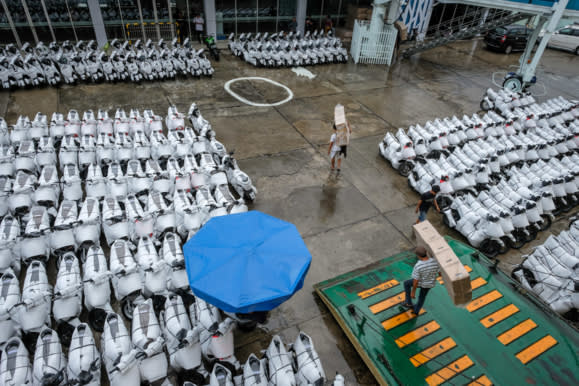 "I'm taking the boat because I want to see my country," Justinius, 28, tells the Nikkei Asian Review. Born in West Timor, he has just finished his studies in Yogyakarta and boarded the Dobonsolo in Surabaya to return home to Jayapura, where he works and lives with his Javanese wife. "Taking the boat is also less expensive than the plane," he adds.

Pelni tickets cost between half and a third less than air fares servicing the same routes and mostly appeal to the Indonesian working class, whose minimum wages barely surpass 1 million Indonesian rupiah ($74) per month.

Justinius is among numerous Indonesians choosing this slow, outmoded method of transport over flying in order to save some hard-earned money. They are packed into this ship like sardines, occupying all available bunk beds and rest spots. Some snooze, others play cards and smoke, while others enjoy the fresh sea air and the views from the open areas on the upper decks. As there is no difference in the class of tickets, each passenger must find an empty berth in the communal sleeping compartments, or be content with laying a sheet on the floor and sharing life at sea with an army of strangers for days on end. 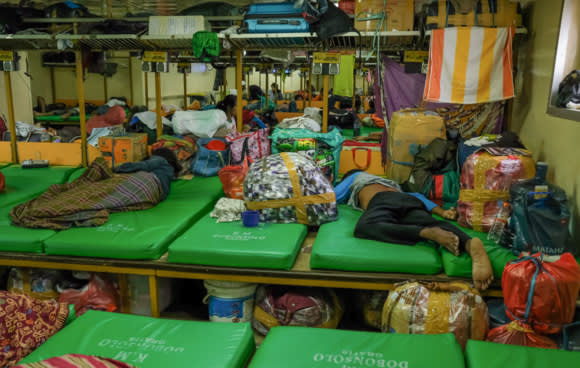 The biggest Pelni ships can legally carry up to 3,000 people and weigh about 15,000 gross tons. Regardless of being often overloaded with cargo and passengers, they still maintain a relatively impressive safety record -- apart from a serious disaster in 1981, and a recent incident off Indonesian Borneo last December, when the ship Kelimutu, with 511 passengers on board, crashed against the Maju 88, which was loaded with fertilizer. There were no casualties in that incident, unlike on Jan. 27, 1981, when the Tampomas II caught fire and sank off the coast of Java, killing 431 people. The episode is remembered in songs by popular Indonesian songwriters Iwan Fals and Ebiet G. Ade.

Passengers on this voyage seem relaxed. "I'm going back to Sorong, Papua, to see my family," says Ferdi, another young man traveling alone to West Papua. Wearing a baseball cap, a black hoodie and sporting several tattoos on his forearms, Ferdi says he left his native Sorong in Irian Jaya to find work in Jakarta, where he has also operated as a graffiti artist and hip-hop singer on the side. He had taken one month off but decided to spend a week at sea to save on the cost of transport. "I know, it takes a long time, but I can't afford flying at the moment," he explains. "Maybe for the return trip."

Pelni ships offer Wi-Fi services for a small fee, provided by Indonesia's leading mobile operator Telkomsel; small cinema halls that project at least a couple of movies daily; a kitchen serving three complimentary meals a day; and modest cafeterias. The biggest ships also have karaoke rooms where small musical combos play dangdut concerts -- one of Indonesia's most popular music styles which blends Hindustani and Arabic rhythms spruced up with modern techno. Given the many Muslim passengers on board, loudspeakers also announce the opening times of the prayer room. Lately, Pelni has tried to shake off its reputation as a working-class carrier by re-branding itself as a cruise operator for tourists. Launched in 2017 as a joint effort between Pelni and the state tourism department's "Wonderful Indonesia" campaign, the program "Ship Xperience: New Way to Explore Wonderful Indonesia" targets local tourists by offering low-priced, live-aboard cruises to some of the archipelago's most coveted marine hot spots (Komodo National Park near Labuan Bajo, Flores; Raja Ampat Marine Reserve, off West Papua's northern tip; the Wakatobi archipelago off southeastern Sulawesi; and the remote Banda Islands in the southern Moluccas).

The three day-two night packages include meals, cabin accommodation, island hopping and activities such as hiking and snorkeling. Priced between 1.4 and 3.7 million Indonesian rupiahs, Pelni's new venture does not aim at its existing rock-bottom budget market, but rather to a wider segment of the population and potentially to foreign tourists as well. "The concept we offer is similar to a 'live aboard' cruise. Pelni ships have full facilities, so tourists don't have to worry," Didik Dwi Prasetio, corporate secretary of Pelni, told the local Tribun News ahead of the program launch in August 2016. "We already provide hot showers, a varied food menu, and of course, electric sockets to keep tourists happily snapping selfies."

The challenge ahead will be whether or not the company can shake off its image as Indonesia's low-class sea carrier and tempt middle-class locals and even foreign tourists away from budget airlines and onto slow boats throughout the sprawling archipelago.