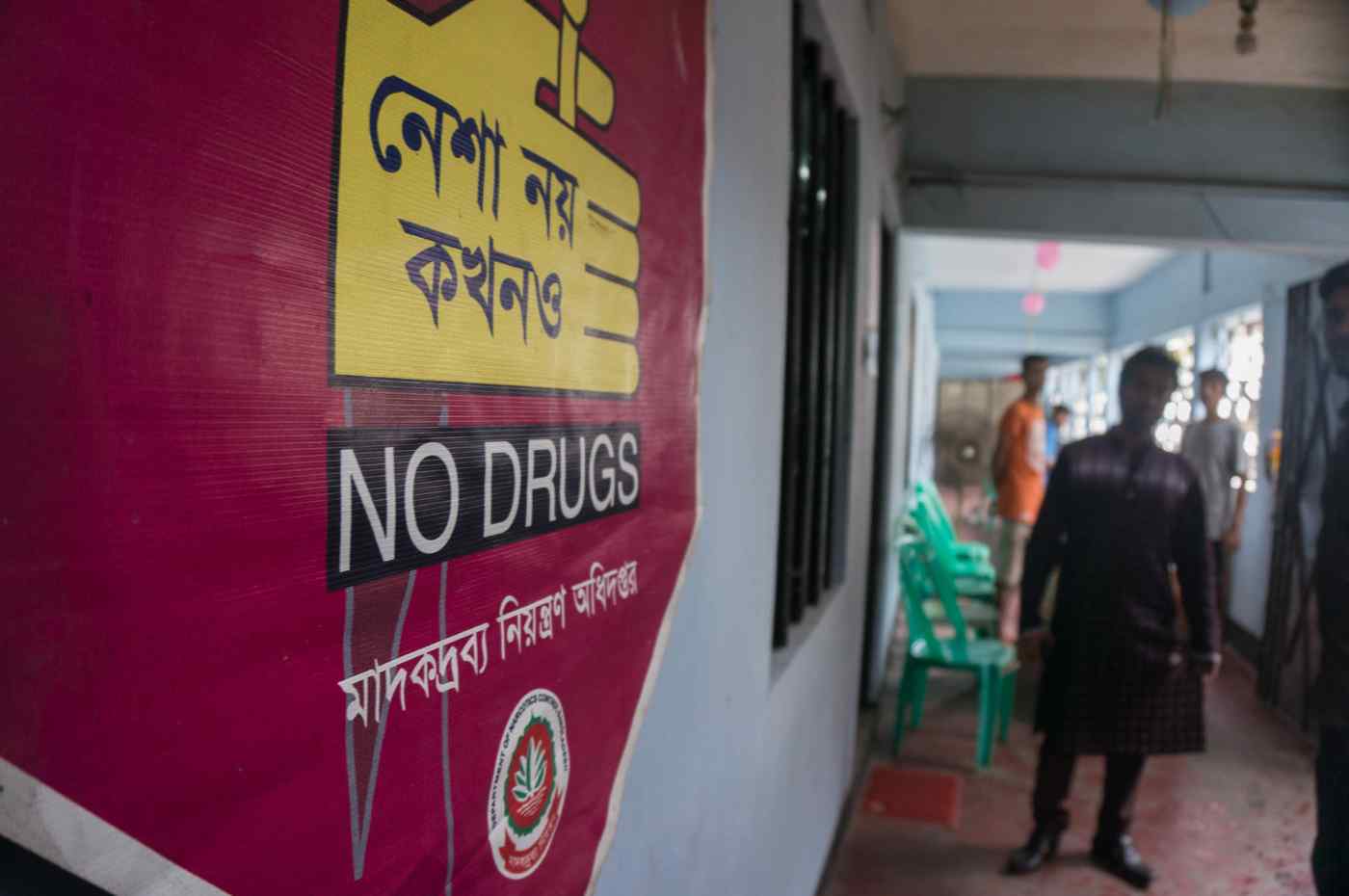 A sign at NONGOR treatment center encourages patients, many of whom are addicted to yaba, to steer clear of drugs. Bangladesh has seen the use of yaba soar in the last decade. (Photo: Nathan A. Thompson)
NATHAN A. THOMPSON, Contributing writer July 23, 2017 14:00 JST | Myanmar, Cambodia, Laos
CopyCopied

COX'S BAZAR, Bangladesh -- Methamphetamine has become an increasingly corrosive influence in Bangladesh, with the number of pills seized by the authorities spiralling from the thousands into the tens of millions in just a few years.

Local authorities confiscated 81,000 tablets in 2010, according to the government's Department of Narcotics Control which estimates that by 2016, the figure had risen to 29.5 million.

On a single day in June, Bangladeshi special forces seized 1.5 million tablets from a fishing trawler in Chittagong bay, a major Bangladesh seaport. It would have been the largest ever seizure except for a 2.8 million haul in January 2016, but even that mammoth haul represented the amount required to sate the nation's users for just over a day.

Every 24 hours Bangladesh eats up 2 million of these sweet-smelling pills known as "yaba" that come in an array of enticing colours and usually contain a mix of methamphetamine and caffeine, government sources told Reuters. 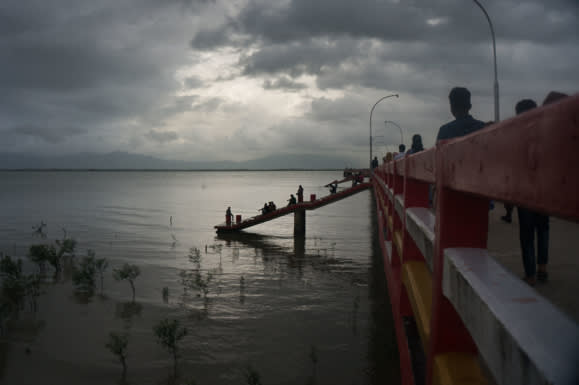 The Naf River separating Bangladesh and Myanmar is used by drug smugglers bringing in enough yaba pills to allow the country to consume 2 million pills each day. (Photo: Nathan A. Thompson) ​

The exponential rise in the flow of methamphetamine started in 2006. Before then, if you were going to get high in this hot wetland it would have been on cannabis or heroin. But now, yaba, a cheap synthetic drug that does not depend on unreliable harvests, like heroin and cannabis both do, is gaining huge popularity among the country's youth.

"Initially, yaba use was concentrated among the adolescents of aristocratic society, particularly among the English medium students of Dhaka city," according to a 2013 annual report, the most recent available, from the Bangladesh Department of Narcotics Control.

"Very soon yaba became a symbol of smartness, fashion and aristocracy. Model girls, film heroines, singers, dancers and many of the celebrities became a subject of media reports for abusing yaba," the report said.

Farhan, a former yaba addict, remembers that time well. It was the early 2000s and he had not long graduated from a top private school.

"I used to vaporize it off foil and suck up the smoke with a five taka (6 cents) note," he told the Nikkei Asian Review as he sipped espresso and forked a chocolate brownie in an upmarket coffee shop in the capital, Dhaka. "It has a vanilla smell and a taste I can't explain; the feeling starts in your chest and then whoosh!"

"It was something new," he continued. "My friends and I already smoked weed so we already had one method of getting high, and when we heard that yaba made you hyper and energized we tried it."

Farhan caught the first trickles of yaba in Bangladesh coming from neighboring Myanmar. By 2012, it was a flood.

From about 2011, illicit drug manufacturers in Myanmar decided to shift increasing amounts of their produce through Bangladesh because traditional smuggling routes had been choked by the 2012 "Mekong Safe" program led by China and Thailand.

Bangladesh was a softer target. The impoverished nation has a 4,000 km border with India and a 250 km border with Myanmar -- the source of most of South and Southeast Asia's yaba supply, according to the United Nations Office on Drugs and Crime .

"Rebel groups in Myanmar like The United Wa State Army have been accused of simply shifting from the opium and heroin business to amphetamine manufacturing," said Tom Kramer, a Myanmar expert with the international research and advocacy body the Transnational Institute, referring to a marked decrease in heroin production in Myanmar.

The bobbing poppy heads long associated with golden triangle countries like Myanmar and Laos are rarer now that the world heroin supply has been overtaken by lawless Afghanistan. Opium harvests were always unreliable and, after decades of eradication efforts by regional governments in Southeast Asia, the switch to making yaba pills was a no-brainer for the drug gangs.

"The increase in production and use of amphetamine pills has been driven by both demand and supply, as well as profound socio-economic changes in the affected countries, which have moved from rural agricultural based economics to urban, industrial and market based societies," Kramer said.

However, several officials and drugs workers I spoke to in Cox's Bazar near the border with Myanmar thought more sinister forces were responsible. "Yaba is a conspiracy to destroy young people in Bangladesh and prevent us from developing," said Najnin Sarwar Kaberi, organizing secretary for the ruling Awami League party in Cox's Bazar.

Her theory is that Bangladesh's old enemy Pakistan, against which the country fought a war for independence in 1971, is bitter and jealous of Bangladesh's rapid development. As a result, Pakistan is preventing its allies in America from putting the screws on Myanmar. "The U.S. are not putting pressure on [Myanmar] to stop production so we are suspicious that they are working with Pakistan to supress Bangladesh's development," she said.

Bangladesh's economy has been growing at an impressive rate of over 5% each year for the last decade. In 2016, growth in gross domestic product hit a record annual 7.05%. Pakistan has been lagging a few percentage points behind, although this hardly proves Kaberi's case.

Even so, Didarul Alam Rashed, executive director of NONGOR, a prominent drug charity and treatment centre in Cox's Bazar, also thinks it is a conspiracy. "It is Pakistan," he said. "They are trying to harm our country. We have 50 million young people here and they are trying to destroy their health and energy."

These theories might seem unlikely but have to be viewed in the context of long-lasting societal trauma stemming from the war. The Bangladesh government estimates more than 3 million of its civilians were killed and hundreds of thousands of women raped during the eight-month conflict in 1971, although independent researchers put the civilian death toll in the hundreds of thousands.

The theories also betray the level of anxiety in Bangladesh at how yaba is affecting young people. Roughly one-third of Bangladesh's population is aged between 15 and 30, according to data portal IndexMundi. They have more free time and spare cash than any generation before them and yaba is their drug of choice, according to Hossien Muhammed Zaki, research fellow at the Social Science Research Council in Dhaka.

"Unfortunately, the Department of Narcotic Control does not exactly know how many people abuse drugs in Bangladesh," he said in a 2015 article in the Bangladesh Police Staff Journal. "However, the Daily Star (2013) estimated that the number of addicts in Bangladesh is more than six million who spend over 70 million taka ($860,000) every day. At a later stage Khan (2014) reported that 53.27% of young people in the country [are] addicted to drugs."

Despite going through profound economic and demographic changes, families in Bangladesh remain close knit and children often live at home until they are married. Children are indulged, even if they are getting high every day.

"My dad would always give me money if I asked for it," said Farhan. "My parents must have known what I was doing but they were in denial ... my friends and I always used to talk about how spoiled we were."

A recent study by four academics in Sylhet city found that 64% of drug users funded their habits with money from their family. A similar study published by the Police Staff College journal in Dhaka found that 17%, the second largest group of users, got money from home.

Prices have increased since Farhan's addiction in the mid-2000s, according to local media. Now a single R7 pill costs up to 900 taka ($11). A cheaper version, called "Pink Champa," goes for about 300 taka ($3.7) and then there is the fabled "Controller" -- a rare pill of the utmost purity that costs twice as much as an R7.

Sitting in front of a cabinet stacked with awards including several "best NGO" gongs, Rashed drew on 16 years' experience with non-government organizations, as he spoke at a treatment center for drug addicts he runs in Cox's Bazar. Over 70% of patients at NONGOR drug treatment center in Cox's Bazar are addicted to yaba, a methamphetamine-based pill almost unheard of in the country 10 years ago, according to executive director Didarul Alam Rashed. (Photo by Nathan A. Thompson)

"Lots of people in our country are frustrated," he explained. "Lots of people are shy and can't adjust to society so when they take yaba they feel energetic and full of confidence."

"They also use it for sex because men feel they can perform better. One of our clients lived with three girlfriends at once; they were all addicted," he added.

In the treatment center, two dozen men in matching brown polo shirts held hands and chanted the serenity prayer, the non-denominational liturgy adopted by U.S. group Alcoholics Anonymous. They screwed up their eyes as if willing themselves to forget the dull urge of drugs. Farhan finished his affair with yaba in 2008 when his girlfriend came into his room at his parent's house. "She asked for a cigarette and when I said I didn't have any she got angry and just went and opened my draw to see for herself," he said. "Inside was the foil and the pills and everything and I just sat there thinking 'Oh shit.'"

She took the paraphernalia straight to his father. Farhan was busted but he did not mind. "By then I really wanted to stop," he explained.

The same cannot be said for the drug gangs of Myanmar, or the smugglers, or party kids wrapped in a drug honeymoon, or the addicts terrified to live without their little red pills. Until then there will be more people, like Farhan's girlfriend, finding soot-traced foil in their family's drawers.