Inside the painstaking recreation of Hotel Okura's famous lobby When the main wing of the Hotel Okura in Tokyo was demolished in 2015 there was a lingering sense of loss at the disappearance of an irreplaceable slice of Japanese modernism. Created in 1962 by the architect Yoshiro Taniguchi, with the help of an exceptional group of artists and craftsmen, the Okura's peerless sense of time and place peaked with the famous lobby, a space so atmospheric that its power remained undimmed 50 years on. To idle in the airy lobby or sip a martini in the smoky Orchid Bar was to wallow in a Tokyo that is fast disappearing.

Because of all this, walking into the lobby of the new Heritage wing of the Okura is disconcerting. For here, inside a gleaming new skyscraper, the much-loved lobby has been perfectly, confoundingly, recreated. The familiar lounge chairs, lacquer tables, pendant lights and woven hangings are all there. The vintage world wall clock is in place; even the bamboo shadows still peep through the paper screens just as they did in the old lobby.

"The decision to rebuild the hotel was taken more than 10 years ago," says Shinji Umehara, the man in charge of the Okura's $1.05 billion makeover. "But we knew from the beginning that we wanted to keep the lobby. It's the face of the hotel." It was also decided early on that the only architect they wanted for the job was Yoshio Taniguchi, the 82-year-old son of the Okura's original creator. Although a minimalist in his own architectural work -- far removed from the craft-infused style of his father -- he had worked on some gentle renovations of the lobby in the past (and is, incidentally, an Okura regular of 60 years standing).

News of the demolition sparked uproar, particularly among overseas admirers (Monocle ran its own campaign to save the hotel) but none of the attendant publicity was enough to spare the building. The commercial case was always going to win the day: Soaring maintenance costs and modern earthquake regulations sealed the old hotel's fate. The plans were revealed: Taniguchi's low-rise beauty was to be replaced with two glass-and-steel towers (one 17 stories, the other 41) offering 508 new rooms and nearly 20 floors of rentable office space. On the last day crowds turned out to say an emotional goodbye to a defining landmark of postwar Tokyo.

Even before construction company Taisei began its work, Umehara and the board members were being lobbied by loyal Japanese customers who wanted changes kept to a minimum. "Our regulars are very demanding," says Umehara. "There are more than 100 people who have been coming here for over 50 years. The question I was asked about most was the lobby." The lobby is a meticulous remake of the old hotel's most famous feature.

Long-standing members of the hotel's health club had strong opinions, as did stalwarts of the Go salon. Frequenters of the classic Orchid Room restaurant and Orchid Bar wanted their say too. Umehara's job was part developer, part diplomat. Initially the team toyed with preserving the original lobby in its entirety.

"Once we started poking around it became clear that the only way to keep it standing was to add structural columns that would have changed it completely -- and none of us wanted that," says Umehara. The decision was taken to recreate the lobby within the new hotel: a top-to-bottom remake that would take years and demanded a cast of craftsmen from all over Japan.

The old lobby was carefully dismantled, cataloged and examined to see what could be saved and reused. "The aim was to keep as close to the original as possible," says Umehara. "From an architectural point of view the balance of the lobby is just right. Mr. Taniguchi didn't want to change it." Where possible the same materials were used and where they couldn't be found a close match was sourced. Modern building regulations played their part: The pleasingly low handrail of the old lobby mezzanine, for example, had to be raised to meet 21st-century safety standards.

Craftsmen were enlisted to reproduce the distinctive elements of the lobby, a detailed process that took years. The intricate hinoki cypress kumiko screens that cover the windows were recreated using the same hemp leaf pattern by Tokinobu Sada from Okayama. Fashioned from hundreds of tiny pieces of wood, the 10 screens are made without nails or varnish. "I wanted to make them the Japanese way," says Sada. 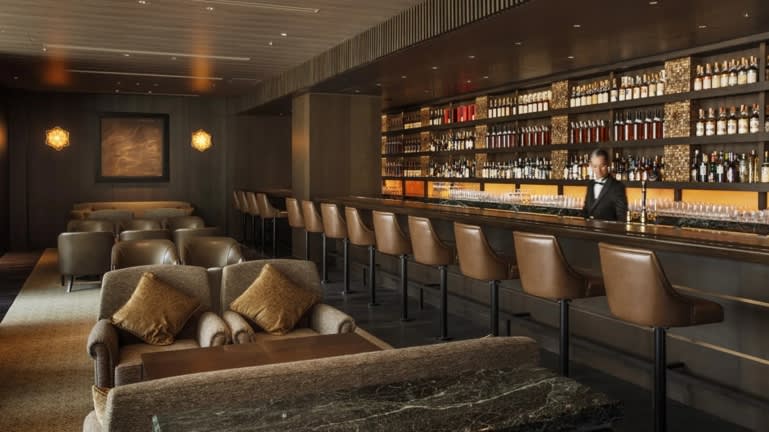 Sada studied the original screens carefully. The unusual placement of the pieces -- some are pressed in a few millimeters, meaning the screens aren't completely flat -- perplexed him until he realized that this had been done deliberately to make the diffusion of light more dynamic. "The pattern isn't simply decorative," he says with admiration. "It lets light in but also directs it. Of course you can do much more complicated patterns with advanced machinery these days but you can't beat the simplicity of the Okura designs."

The woven panels that hang like a folded screen along one wall were reproduced by Tatsumura Textile, a company based in the old weaving district of Nishijin in Kyoto. Tatsumura had created the original Okura hangings, which were decorated with a four-petal flower motif lifted from the work of celebrated potter Kenkichi Tomimoto.

Susumu Shirai, now an adviser to Tatsumura, worked on the original hangings as a young man. "It was my job to transfer Mr. Tomimoto's design to a large-scale tapestry," he says. "It was an enjoyable commission. The bulk of our business in those days was obi [kimono sashes]. Back then Western design was all the rage; it was rare to see so many Japanese references in a modern interior project." The old Okura was filled with traditional patterns that covered every wall, carpet and lift door. 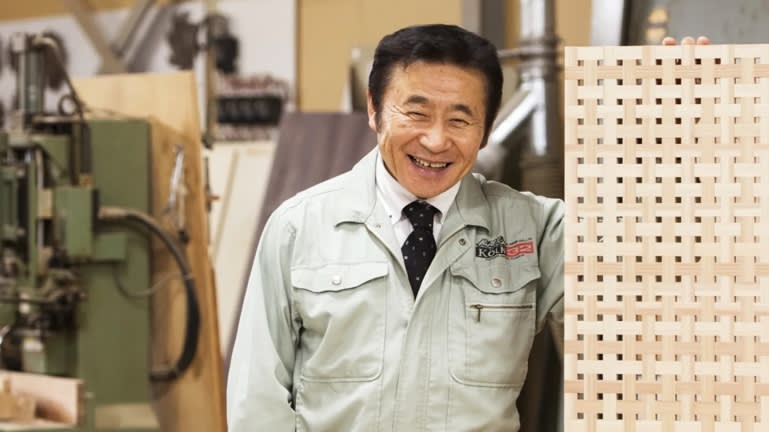 Although the original drawings still existed, the materials and technique for the embossed flowers had not been documented. The team took apart one of the old hangings to study how it was made and began the process of recreating it through trial and error.

Taniguchi didn't want a sparkling new facsimile of the lobby; instead he asked the craftsmen to create something closer to the mellow tone that years of cigar smoke had imparted upon the original. "We chose threads that had slightly faded colors to give the appearance of being aged," says Nobuyasu Umegaki, the Tatsumura workshop manager. The commission took four years from start to finish; the weaving of the flowers alone took two weavers half a year. "It was a great challenge," says Shirai. "But through it we learned embossing techniques that will be passed on to the next generation." Among the most memorable features of the old lobby were the pendant lights, shaped like strings of ancient Japanese beads, and the low lacquer tables with chairs arranged like petals around them. The old chairs were reconditioned and re-covered; the lacquer tables were restored at Shinwa Industry in Shizuoka. Fourteen well-worn circular tables were repaired, sanded and sprayed with urethane and natural urushi lacquer, then polished to a mirror shine.

"You need a lot of experience to spray with urushi," says Yasuaki Nakamura, a lacquer craftsman. "It is a very tricky natural material. Temperature affects it; it mustn't be too thick and you have to avoid making bubbles on the surface. Once it's on, though, it's surprisingly tough. The only thing it doesn't like is too much sunlight." The team finished each table with a wax polish, working the surfaces until flawlessly glossy.

The job of reconditioning the pendant lights was assigned to Tokyo lighting company Yamagiwa. "We went to the lobby before the demolition started to study the lights and look out for potential problems," says Yamagiwa's Takashi Ikeda. "We discussed the possibility of reusing the original lights but the acrylic was cracked beyond repair in places." A decision was taken to mix old and new, retaining the gold-threaded exterior panels and remaking the white interior layer.

The work was shared between two family companies in Tokyo: Sister and Towa Kasei. "Before the Okura was demolished I went to take a picture of the lanterns, never dreaming that the restoration work would come to us," says Yuji Shimizu of Sister. It took the company a year to perfect the replacement pieces. 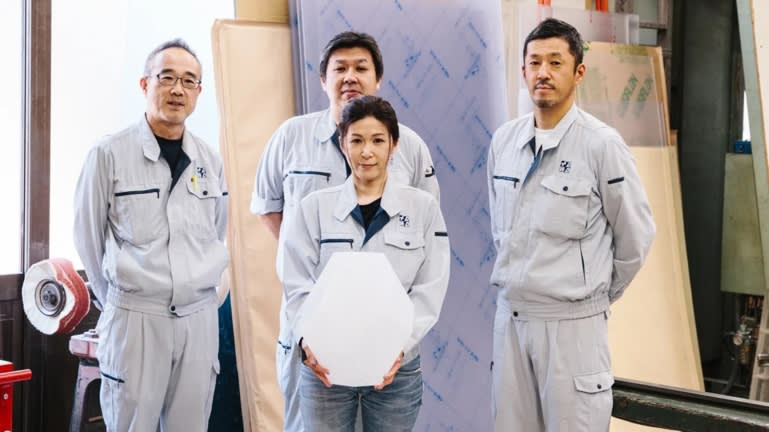 Towa Kasei cut and assembled the interior acrylic panels for all 110 lampshades. "Putting the panels together to create a pentagon shape was a challenge," says company President Yoshitaka Azuma. "It looked possible on paper but in practice it required repeated trials. We would slice the edge of the panel and adjust, literally by two degrees at a time. In the end we realized that a 60-degree angle was the solution."

Dimmers are now in place and the muted tones of the old incandescent bulbs have been replicated with LEDs. "This lighting will live until the next renovation," says Shimizu. "The work of someone like Mr. Taniguchi never gets old."

Now the lobby is almost the only part of the new hotel that resembles the old Okura. The Okura's south wing from 1973 still stands (for now) and the Okura Museum, housed in an old building from 1927, has been renovated and given a more prominent position alongside the two new towers around a low square pool. The rest of the hotel has an entirely new face. Today's guests will experience modern rooms, a bar with views over Tokyo and a vast spa and swimming pool. 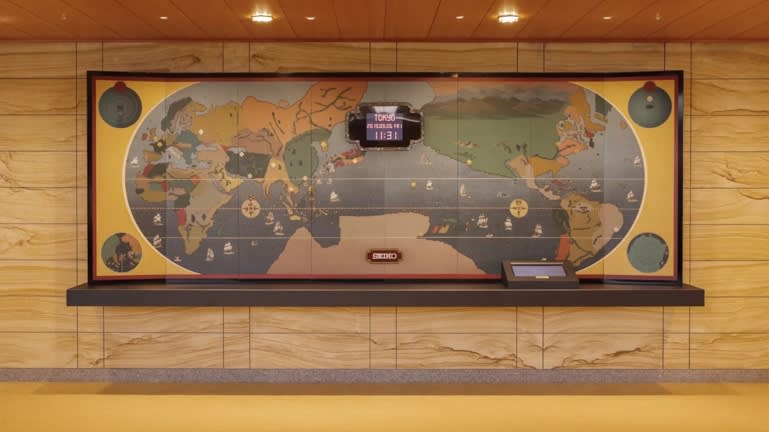 The nods to the past are there: The Go salon has been reinstated, as has the tea ceremony room. The veteran chefs in the Japanese restaurants have returned; ladies in kimonos still guide guests to the lifts. The Orchid Bar and the Orchid Room (now simply Orchid) might look nothing like their old selves but the same staff are back, jackets and bow ties in place. The heritage of the hotel survives in those people and the thoughtful service they continue to offer.

It still rankles that the old Okura no longer exists. Tokyo's modernist past is dwindling; even Kisho Kurokawa's astonishing Capsule Tower is now, unbelievably, threatened with demolition. If the city does not make a reckoning with its architectural legacy it could disappear for ever. Kenzo Tange's majestic Yoyogi Gymnasium, a relic of the 1964 Olympics, has been spruced up for 2020 and shows just how relevant a decades-old building can be.

Still, after months of watching the painstaking work that went into remaking the old lobby, it is impossible not to feel admiration for what has been achieved. Japan's craft skills will be kept alive by such commissions, making the Okura project as much about the future as the past.

"In building this hotel," says Umehara, "we had to think about making something that will last 70 or 80 years."