PARIS -- UNESCO will recognize Amami Oshima and other islands in Japan's southwest as a World Heritage site for their array of one-of-a-kind animal and plant species, the United Nations agency decided Monday.

The designation also covers Tokunoshima and Iriomote, along with the northern part of Okinawa's main island. Altogether, they represent Japan's 24th World Heritage site and the fifth natural heritage site.

Japan's newest World Heritage site spans nearly 43,000 hectares over the four islands. The area is home to rare species such as the Iriomote leopard cat, Ishikawa's frog and the Amami rabbit. Iriomote and Amami Oshima are especially known for their wide expanses of mangrove forest.

The induction as a World Heritage site likely will spur an uptick in tourists. Poaching also remains a problem. Relevant agencies and local governments, including Kagoshima and Okinawa prefectures where the islands are located, will bolster nature preservation efforts. 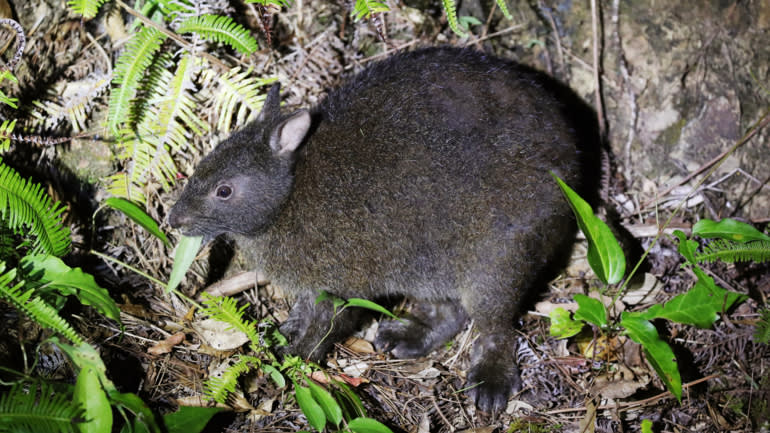 The Amami rabbit exists only on Japanese islands that are part of the new World Heritage site declared July 26 by UNESCO. (Photo by Shinya Sawai)

Japan first nominated the islands as a natural heritage site in 2017. But a UNESCO advisory panel in 2018 recommended postponing the registration, mainly due to how the wide area initially proposed would inhibit integrated preservation efforts.

The government withdrew the nomination and tried again with a redrawn map.

The four islands are largely expected to be the last places in Japan enshrined as natural heritage sites. Other candidates lack sufficiently unique terrain or natural features on a global scale. Japan's remote Ogasawara Islands are the most recent place to receive that honor, in 2011.

UNESCO is expected to add 17 Jomon period archaeological sites in northern Japan to the World Cultural Heritage list on Tuesday. They are located in Hokkaido, as well as in the prefectures of Aomori, Iwate and Akita. Among the most famous are the remains of Aomori's Sannai-Maruyama settlement, built about 5,900 years ago.