The Grand Room of the Shishi-Iwa House at dusk: Designed by award-winning architect Shigeru Ban, the hotel can be enjoyed in all seasons and times of day.    © Hiroyuki Hirai
FRAN KUZUI, Contributing writerJuly 7, 2019 12:00 JST | Japan
CopyCopied

KARUIZAWA, Japan -- Some people travel to experience the art of luxury. But newly opened boutique hotel Shishi-Iwa House, in the central Japanese mountain resort area of Karuizawa, puts a fresh spin on the concept by offering guests the luxury of experiencing both art and nature.

Designed by Pritzker Prize-winning Japanese master architect Shigeru Ban, the property was developed by Singapore-based HDH Capital Management and aims to offer what it calls "bespoke involvement" with great architecture and contemporary art surrounded by nature.

Karuizawa, located less than two hours north of Tokyo by high-speed train, boasts a mix of upmarket hotels, restaurants and thermal hot-spring facilities in a wooded mountain environment. It is often compared to the Hamptons area outside New York City as a retreat for affluent city dwellers.

Nestled in a forest just outside town, Shishi-Iwa House offers just 10 guestrooms divided among three terraced villas, each overlooking woods and some with scenic views of Mount Asama, an active volcano that soars to 2,568 meters. But its owners and architect wanted the hotel to be much more than a luxury retreat in a picturesque setting. Shishi-Iwa House was designed to be much more than a luxury retreat in a picturesque setting.   © Hiroyuki Hirai

"Shishi-Iwa House is a piece of art in itself, not a hotel in the traditional sense," said HDH Capital Management CEO Huy Hoang. Phillip Wang, who heads the company's project development, said: "We wanted our project to be about the art of architecture. We aspired to say something about space, movement and communication."

Ban is best known for using paper and recycled cardboard tubing in buildings, and for incorporating structural elements into designs for buildings as diverse as the Centre Pompidou in Metz, France, and the Cardboard Cathedral in Christchurch, New Zealand. 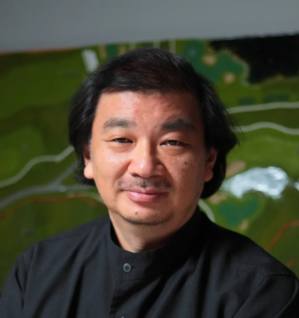 He has also been widely praised for his humanitarian work, designing low-cost housing for people caught in natural disasters around the world, and for his use of reinforced cardboard tubing to construct temporary shelters. His citation for the Pritzker Prize, one of the architectural profession's top awards, noted that, "Where others may see insurmountable challenges, Ban sees a call to action. Where others may take a tested path, he sees opportunities to innovate."

The structure and furnishings of Shishi-Iwa House bear many elements of Ban's signature design concepts. "There are unique openings we designed for each room at Shishi-Iwa House to blend interior and exterior atmospheres at the hotel and its garden," Ban told the Nikkei Asian Review. 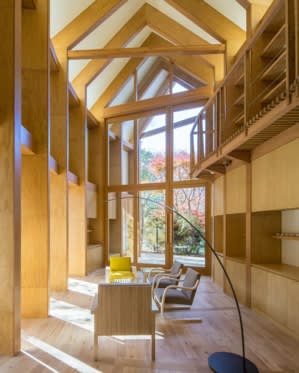 According to Ban, various openings, as in the library, showcase Karuizawa’s stunning setting.   © Hiroyuki Hirai

"The various types of openings, which include the big timber door at the entrance, timber sliding doors throughout the garden and the glass shutter in the Grand Room, showcase the vibrant Karuizawa nature alongside the modest timber hotel design."

Guests encounter Ban's ideas and aesthetics as they enter the sweeping wood-lined library where furniture designed or chosen by Ban appears balanced in space. Functional objects and light fixtures are fashioned from cardboard tubing and other unlikely materials.

Guestrooms here are clustered into several units in each villa, sharing a common "kitchenette" or social space. "We gave a great deal of thought to how one creates a space where there is time for recreation and reinvention, a place to pull oneself out of the mess of contemporary life," Hoang said. Each villa is designed to emphasize the changing seasons, the opportunity for interaction between guests and the exquisite experience of good design.

Shishi-Iwa House is one of only two hotels designed by Ban, and his only completed boutique hotel project. "My designs are always problem-solving," Ban told a magazine in 2014. He clearly relishes challenges and indeed faced many in dealing with the structure's site and local building code. Among the biggest hurdles was the awkward shape and location of the block, next to a mountain road, which made it difficult to achieve a sense of privacy and seclusion. Most of the rooms, however, look out onto trees.

"We set in place many rules and strict guidelines to construct this hotel, ranging from the building's visual appearance to the shape of the roof, colors and exterior materials," Ban said. "These guidelines had an important influence on my design."

"There were many big trees in good condition at the site which I did not want to cut. Therefore I made the building narrow and curved to be placed between trees in order to avoid cutting them," he added. In another trademark Ban technique, most components of the hotel were manufactured off-site and then assembled locally to protect the surrounding greenery and to facilitate the curve of the building. There are views of nature from every corner of the space.   © Hiroyuki Hirai

Ban said his architectural firm, Shigeru Ban Architects, developed a new construction system for the hotel called PHP, which uses timber boxes constructed from prefabricated plywood that are sandwiched on a timber frame and fashioned into the elements for each villa. "This method of using prefabricated wood panels has never been used before in hotel construction," Ban said.

Throughout the hotel there is an emphasis on group communication, which makes it ideal for a corporate or social retreat. Each room is connected to a communal room and then to the Great Room, where meals can be served or drinks enjoyed before an open fire, and a communal breakfast of local seasonal fare is served daily.

"This is a sustainable project for the public cause," Hoang said. Rooms are spare with few amenities and distractions. Instead, there are views of nature from every corner of the space, including the bath. "A lot of hotels just provide things for the sake of providing. We don't see the need for a TV or lots of shampoo. We are providing what the guests really need," said Hoang.

Hoang said Shishi-Iwa House needs to sustain itself economically, but does not need to make a profit because he financed it personally. While costs have not been divulged, the project clearly runs into multiple millions of dollars. "We're inventing a new typology for the hospitality business," he said. "Our unique funding structure allows us to develop a curated project free of the usual commercial constraints. We financed 100% from my own resources. That's important because we aren't relying on investors' conditions and can make our own decisions. "For this project we decided to go against the metrics of how to make a hotel successful," he said. "For example, people told us only 10 rooms is not realistic, and plus 50% of the space is public space, and that's never done."

Hoang added: "We have a business model that is hopefully sustainable. Architecturally our project is one of the best in the world. We can keep our room rates low enough for the 99% to enjoy by keeping costs down. We have lower rates in winter to offset the higher rates in summer. And lastly, we don't have a profit margin to incorporate." Rooms can be booked by emailing the hotel or through the website, and the average stay is currently about $400 per room in summer months, according to the company. 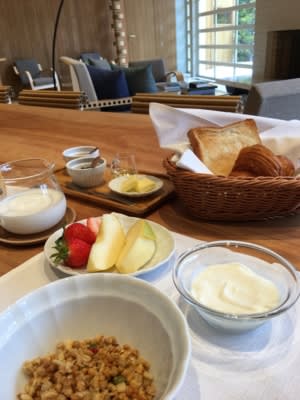 Hoang said he was profoundly impressed by Ban's working methods. "He wouldn't stop until there was a creative solution that worked as well as met our objectives in the best way. It was a great learning experience in how someone can continually find different ways of addressing solutions elegantly. And not only once, but over and over."

Ban added: "From the beginning, we found similarities between the humanitarian works I have done and the client's concept of social responsibility. To realize this philosophy at Shishi-Iwa House we have developed shared community rooms and layered room access from separated clusters as a new style of hotel."

On a weekend in early summer, student and architect Nico Lo, an early guest at the hotel, traveled from Taiwan to experience Shishi-Iwa House. "Staying there was like reading a book written by Mr. Ban," Lo said as she set off to explore the area on a bicycle supplied by the hotel. "We could understand his world outlook -- how a core wraps itself in a core, a line links to a line -- and we could feel part of it."