Japanese baseball is ready to swing with return of NPB

Delayed by COVID-19, league gets underway but with empty stadiums Even after the regular season for Japanese professional baseball kicks off, the stadiums will look a lot like they did in this preseason match: empty.    © AP
ROBERT WHITING, Contribiting writerJune 19, 2020 08:00 JST | Japan
CopyCopied

TOKYO -- The Nippon Professional Baseball league is starting up again today much to the happiness of the millions of fans who follow Japan's national sport. It marks a partial return to normality as the nation slowly reopens after a long period of voluntary lockdown.

"We've caused a lot of problems and worry for the players, staff and, first and foremost, the fans by constantly changing the schedule," NPB Commissioner Atsushi Saito said in a recent online news conference. "But we hope to provide encouragement to the public ... and also give guidance to other sports."

The professional baseball season had been scheduled to begin March 20, with a full slate of 143 games for the 12 teams of the Central and Pacific Leagues. But the appearance of COVID-19 forced a suspension of preseason practice exhibition games and a postponement of the start of official play.

The NPB is not the first major pro baseball league to return to action during the coronavirus pandemic. The Chinese Professional Baseball League opened on April 11 and the Korean Baseball Organization began official play on May 5. In the U.S., however, Major League Baseball has yet to decide on a timetable for a return to play and arguments about money may in fact delay any return. Top: Taiwan's top-tier Chinese Professional Baseball League has resumed games, though with crowd-control measures in place. (Getty Images) Bottom: Players on the Meitoku Gijuku High School baseball team, in Kochi, Japan, are told by their coach on May 20 that the summer national high school baseball tournament has been canceled due to the coronavirus.   © Kyodo

Professional baseball in Japan, which began league play in the 1930s, drew 26.5 million fans in 2019. The two most popular teams are the Yomiuri Giants of Tokyo and the Hanshin Tigers of Osaka, both in the Central League; each draws more than 3 million fans to games in normal years and dominates national media sports coverage.

The return of baseball, with a truncated 120-game schedule, will provide a huge psychological boost to this coronavirus-weary nation. Even those who do not follow baseball should get a boost from the feeling of getting back to normal.

Although most games will be televised, they will be played before empty stands, as COVID-19 is still a concern. In early June, two Yomiuri Giants players, including last year's Central League Most Valuable Player, Hayato Sakamoto, tested positive for COVID-19 and were quarantined. 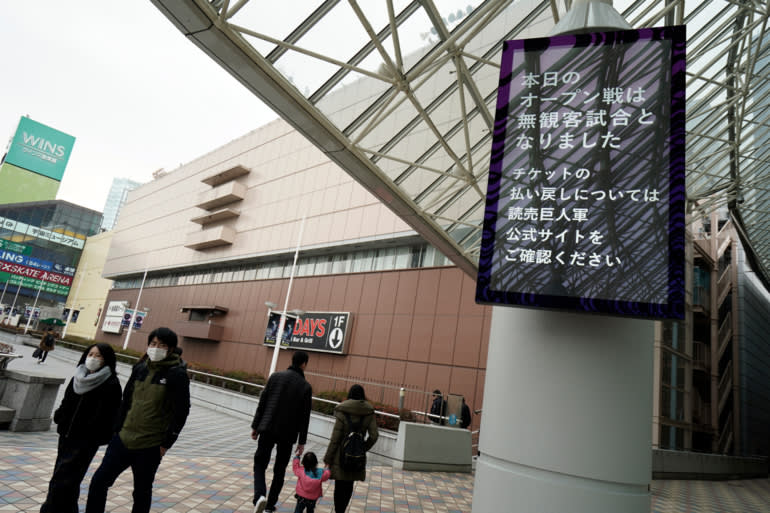 Top: A notice placed outside the Tokyo Dome on Feb. 29 notifies fans that a preseason game between the Yomiuri Giants and the Yakult Swallows that day will be played without spectators. (AP Photo) Bottom: Baseball fans watch the Giants-Swallows game at a baseball-themed pub in Tokyo.   © Reuters

Those notoriously noisy and exuberant cheering groups known as oendan that characterize the Japanese game will be not allowed inside the stadium, thereby creating perhaps the quietest era in the history of puro yakyu ("professional baseball"). NPB officials will monitor the situation in hopes that spectators may be allowed into all parks later in the summer, as has recently been the case in Taiwan.

Other changes may be afoot. Fans have speculated that NPB would cap games at nine innings, thereby eliminating extra-inning games, or perhaps put a time limit on a new inning's start, although Saito would only say the leagues "are discussing it." NPB has already terminated the interleague portion of the schedule as well as the annual All-Star Series.

The Japan Series, a best-of-seven championship between the winners of the Central and Pacific Leagues, was originally scheduled for Nov. 7-15, but Saito has yet to give the new dates. The cheers of the famously exuberant Hanshin Tigers fans will likely not be heard in stadiums this season.   © Reuters

NPB could draw a more global audience than normal. With no baseball being played in the U.S., fans have been watching the KBO and may well turn to the NPB as it opens up. Thanks to the success of Japanese superstars like Ichiro Suzuki, Hideki Matsui and Shohei Ohtani, many Americans are quite knowledgeable about the Japanese game.

"I am glad that there finally there is some good news," Masayuki Tamaki, Japan's leading sports journalist, tells Nikkei Asian Review. "But it's chotto sabishii -- a little lonely... They're playing baseball this year but there's no summer high school tournament, which is very important to the Japanese. It's like a national festival. A summer without Koshien has never happened in my lifetime. So it's not the same."

The Japan High School Baseball Federation announced on June 10 that it would hold a series of games in mid-August at Koshien Stadium. Each of 32 invited teams will be allowed to play one game behind closed doors. As JHBF Chairman Eiji Hatta said, this would give the students a chance to "at least step on the dirt" of the stadium. But it is far from the real thing.

Kozo Abe, sports editor of the popular evening daily Yukan Fuji, says that the return of professional baseball "is a long-awaited event for the Japanese people and for people in the sports media. ... I just hope it will not be canceled midway through due to another outbreak of the new coronavirus and that that the season will last without an accident." That's a wish we all share.