Japanese chefs put their own twist on fine European dining 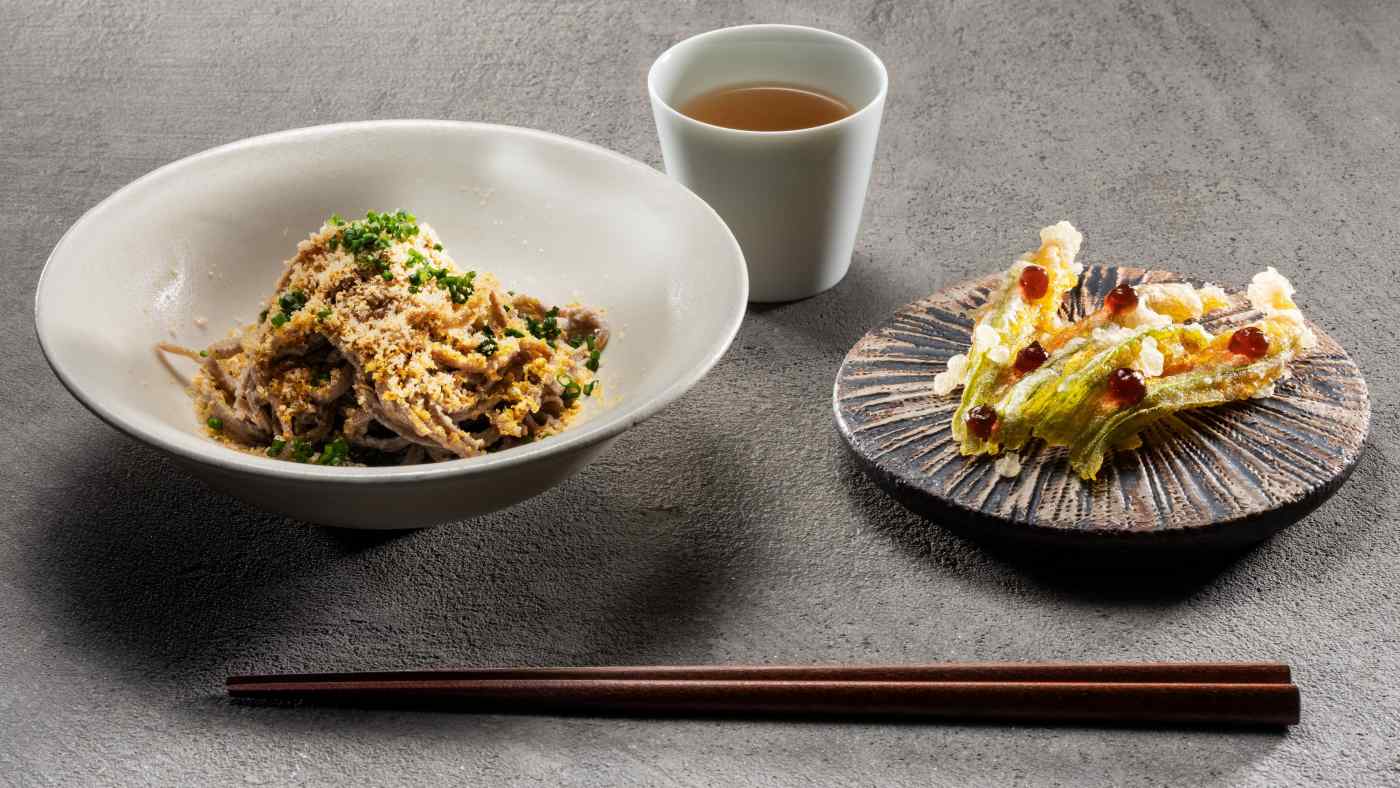 Yoji Tokuyoshi's "soba and tempura": Pasta made from a blend of grano arso and buckwheat flour, dusted with bottarga and sprinkled with hazelnuts, accompanied by a zucchini-blossom fritter. (Courtesy of Ristorante Tokuyoshi)
MELINDA JOE, Contributing writerAugust 5, 2018 10:56 JST | Japan
CopyCopied

MILAN -- Despite its location in a former sushi restaurant on a quiet street in Milan, Ristorante Tokuyoshi bears little resemblance to its predecessor. Inside the green-walled space, the plain wooden counter has been converted into a stylish dining bar set with wineglasses; sushi and sashimi are nowhere on the tasting menu.

Patron-chef Yoji Tokuyoshi, who was born in Japan, is at the forefront of Italian cuisine, known for his avant-garde creations, such as Sicilian cannoli filled with creamed cod and edible flowers; and pizza made with mortadella, anchovies and fried artichokes, layered atop a puffed rice cracker and served alongside caper broth.

In 2005, Tokuyoshi found himself in Milan, unemployed and with hardly any money to his name. He had traveled to Italy the previous year to master the art of Italian cooking, but after several failed attempts to secure a job, he resigned himself to returning to Japan. His fortunes changed when he picked up a restaurant guide on the way to the airport. Intrigued by a review of Osteria Francescana in Modena -- Massimo Bottura's contemporary Italian restaurant, which would later gain three Michelin stars before topping the list of the world's 50 best restaurants twice -- he called the eatery and was invited to come in the following day. He tossed his plane ticket, made a beeline for the restaurant and told Bottura that he wanted to work there.

When the chef asked him what he could do, Tokuyoshi didn't skip a beat: "Everything," he replied. He was hired on the spot and stayed for nine years, ascending to the position of sous-chef and traveling the globe at Bottura's side.

He opened Ristorante Tokuyoshi three years ago. The restaurant has garnered numerous accolades -- including a Michelin star within 10 months of launching -- for his unique take on Italian traditions. His approach relies strictly on Italian ingredients and flavors, but blends in Japanese sensibilities and aesthetics. Grano arso pasta, for example, is enriched with local buckwheat and presented as soba (Japanese buckwheat noodles) with a side of zucchini-blossom tempura. "I don't think of my food as Italian cuisine made by a Japanese chef. It is Italian cuisine that allows you to feel Japanese culture," he says. 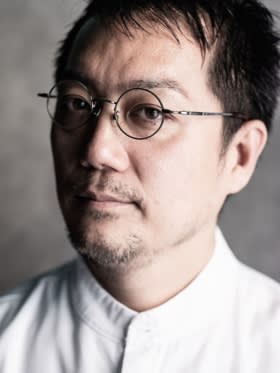 Born in Tottori Prefecture, chef Yoji Tokuyoshi is at the forefront of modern Italian cooking.  (Courtesy of Ristorante Tokuyoshi)

Tokuyoshi is among a new generation of chefs from Japan who have laid down roots in Europe and are gaining recognition for innovative cuisine. Ever since the early 1990s, the Japanese have been traveling to France and Italy to train in prestigious kitchens in order to open restaurants in Tokyo or Kyoto. More recently, however, younger immigrants are choosing to continue their careers in their adopted homes.

"In the past 15 to 20 years, Japanese chefs have impacted the Italian fine dining scene more as sous-chefs than chefs de cuisine. Italian chefs appreciate their incredible commitment and cultural disposition to repeat the same boring gestures millions of times without complaining -- unlike young Italian chefs, who easily get sick of what they're doing," says food journalist Gabriele Zanatta. "Now that they are becoming head chefs themselves, they are looked upon with more admiration than ever."

French audiences have been particularly receptive to the fresh perspective Japanese chefs bring to classic cuisine. By the early 2000s, ambitious cooks such as Shinichi Sato of Passage 53 and Kei Kobayashi of Restaurant Kei had landed positions at Astrance and Plaza Athenee, respectively, and paved the way for their compatriots. Some of the trendiest restaurants in Paris -- such as Clown Bar, Restaurant A.T., and Virtus -- are now run by Japanese.

"Japanese chefs are popular there because they have brought the attention to detail one sees in kaiseki (Japanese multicourse haute cuisine) to European cuisine, resulting in a super-clean and minimalist style," observes Steve Plotnicki, founder of the restaurant ranking survey Opinionated About Dining.

Despite the challenges that come with learning a new language and culture, setting up shop in Europe can offer advantages. For Restaurant A.T.'s Atsushi Tanaka, whose visually striking cuisine draws upon diverse influences, working in Paris has given him more freedom to experiment in the kitchen. "I love Tokyo, but I didn't consider it as a place to open my kind of restaurant," he says. 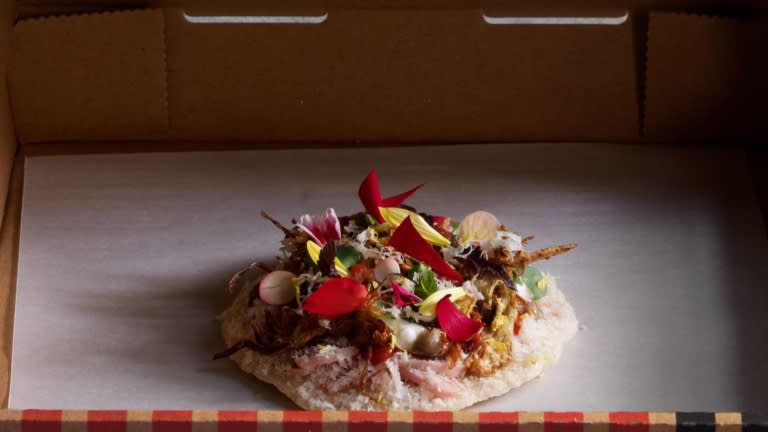 As a female chef, Chiho Kanzaki of Virtus found more opportunities in France than in Japan, where none of the 34 restaurants with three Michelin stars are helmed by women. She spent seven years at two-Michelin-starred Mirazur in Menton, rising to the position of chef de cuisine, before opening her own neo-bistro, Virtus, in Paris in 2016.

In Italy, where diners are typically more conservative, Japanese chefs making unconventional cuisine have had a harder time than their counterparts in France. Even Milan's Ristorante Tokuyoshi got off to a shaky start. For the first three months, guests complained that they didn't understand the concept. "They asked, 'You're Japanese, so why are you making Italian food? Don't you love your own country?" Tokuyoshi recalls.

However, he persisted and eventually won people over. He is planning to refurbish and expand the restaurant next year.

"I want to add a new section where we will serve more casual dishes, but the main restaurant will remain creative and contemporary fine dining. There's no place like that in Milan, don't you think?" he says.