MUNICH, Germany -- In the southern German city of Munich, home to high-tech companies such as BMW and Siemens, a Japanese couple from Nagoya have become unlikely local heroes for devoting their lives to reviving the dying art of baking traditional German bread.

Near Munich's Ostbahnhof rail station, Hinako and Michitoshi Obori sell a range of wholegrain sourdough breads and cakes popular with residents, who arrive throughout the day on foot and by bicycle.

"They do everything to perfection," says a customer with a rye bread in one hand and a chocolate brownie in the other. "And their prices are very reasonable."

In between bites of his cake, he praises the Oboris' dedication to an ancient craft.

"I've not been to Japan," he says, "but the Japanese way of revering and practicing ancient arts is well known in Germany, and we welcome this mindset."

A poster in the window shows that Obori, named for its owners, won a national 2017 Feinschmecker "great taste" award -- a rare touch of self-promotion for a duo who avoid publicity. They declined to pose for a photograph. Inside, breads with familiar regional names and centuries-old recipes neatly line a wooden shelf: Dinkelmischbrot, Roggenbrot, Saatenbrot, Ganzkornbrot, and Kraftballastbrot. 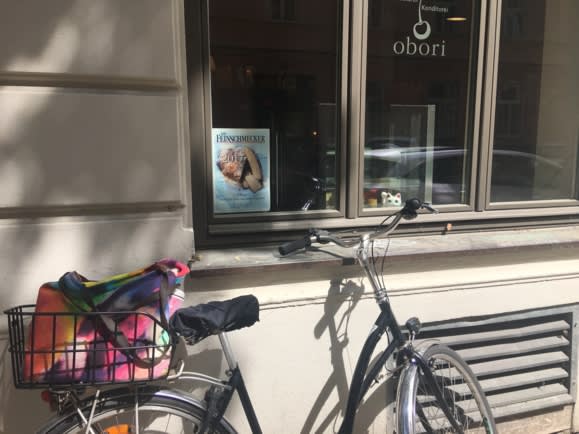 The Obori bakery is located in the tranquil Munich district of Haidhaisen, sometimes referred to as the city's "French quarter." (Photo by Susan Ellicott)

The couple also sells French-style baguettes, stacked in wicker baskets, and patisserie. A family-size pear and almond tart on the counter looks tempting.

Germany boasts more than 3,000 types of traditional breads and prides itself on growing its own grains. However, old-style bakeries have been closing as young Germans reject the long hours of a baker's life. Between 2005 and 2015, some 4,500 bakeries disappeared.

Also, big supermarkets using frozen dough made cheaply in Poland and cooked in Germany have undercut the prices of traditional artisan bakers. So anxious is the German Bakers Association about its dying trade that it wants UNESCO to list German bread culture as an "intangible cultural heritage."

That is an approach widely understood in Japan, where the government protects eight categories of traditional crafts, and has won UNESCO cultural heritage status for its traditional washoku cuisine.

In Munich, Germany's third largest city of 1.5 million people and the capital of the state of Bavaria, the Oboris are celebrated for their determination to revive an artisanal skill. "They've established themselves," says Olga Klenner, 55, a writer for a software company. "They are dedicated to quality, and everyone here respects them."

In Nagoya, Michitoshi worked at an electronics company, while Hinako worked at a bank. One day, they discovered a German bakery in Nagoya's center, and tasted German-style sourdough for the first time. They loved the flavor -- derived from fermenting flour and water to create a "starter" to raise the dough instead of using yeast -- and decided to quit their jobs and move to Germany to learn how to make it. In 1996, they arrived on student visas.

Hinako earned her pastry chef diploma in 2004 and Michitoshi was certified as a master baker in 2005. They found an old bakery in Munich, and set up on their own. Michitoshi focused on hand baking while Hinako built relationships with restaurants, shops and bars to sell their products. Their reputation spread by word of mouth, and they moved to 15, Lothringer Strasse, in the peaceful area of Haidhaisen, 10 years ago, next to a bookshop and around the corner from a school. The bakery is marked by a sign with a cherry logo. A Japanese ceramic maneki-neko cat waves good luck from the window.

Klenner says the Oboris are beloved because "they are modest, authentic and bring their craft to perfection." Several small local bakeries and traditional food shops -- including one that specialized in ham -- have closed nearby in recent years, but she believes the Oboris' approach is inspiring new artisans.

"Since they came, someone opened an excellent new French patisserie near my building," she says. "You cannot make loads of money having just one shop. So in the end it is dedication and your vision that make the difference."

Wrapping a warm loaf of multi-grain bread in a paper bag for a customer, Hinako speaks softly: "We are making exactly the same breads today as when we started," she says. "Our customers like that."