Japanese doctor who watered Afghan deserts: Nakamura in his own words Tetsu Nakamura speaks to Nikkei on Sept. 14, 2018 in Fukuoka. (Photo by Mamoru Yago)

TOKYO -- Tetsu Nakamura, who spent more than three decades doing humanitarian work in Afghanistan, was recently killed there in an apparent ambush by gunmen.

Born in Fukuoka Prefecture, in Japan's southernmost main island of Kyushu in 1946, Nakamura worked in hospitals in Japan after graduating from medical school at Kyushu University. But instead of practicing medicine in Japan, Nakamura went to Pakistan to treat leprosy, then moved to Afghanistan to work with patients there.

He served as local head of a Japanese aid group called Peshawar-kai, and as director of Peace Japan Medical Services. He was awarded prizes for his humanitarian aid work, including the Philippines' Ramon Magsaysay Award, often called Asia's Nobel Prize.

Despite his pioneering work in international humanitarian assistance, he liked to say, "I only know Kyushu and the eastern parts of Afghanistan."

In an interview with Nikkei published on Oct. 21, 2018, Nakamura talked about his life and mission. The following is part of the article that resulted from the interview, lightly edited for clarity. The governor of Nangarhar lifts Nakamura at a completion ceremony for his canal project in February 2012.   © Kyodo

Tetsu Nakamura described himself as an "old-fashioned Japanese man." The term suited him: tactlessly blunt, taciturn and too proud to turn away from a challenge.

"I'm slow to run away," he said. Never a man of many words, he half-joked about the immense challenges he faced, looking a bit bashful.

If he had been quicker to run away, eastern Afghanistan would likely lack a massive irrigation network that keeps farmland there arable. The region would still be a barren desert.

But Nakamura's first memory of failing to escape quickly enough was in the city of Wakamatsu, now Kitakyushu, in Fukuoka Prefecture. As a young boy, he would often go to his grandparents' home to play with his cousins.

There, when his strict grandmother would inevitably come to lecture the children, his cousins would mysteriously vanish and leave Nakamura to bear the brunt of her discipline.

"A man should not cry even when having a hard time," she would say.

"Don't take life for no reason."

"The things my grandma told me were all part of the social norms of old Japan," Nakamura said. "These morals still remain part of my personality."

His parents were also passionate about education, and they forced him to read the Analects of Confucius, the principal text of Confucianism, until he entered the third grade.

He recalled passages like "do not do to others what you do not want done to yourself," and "to see what is right yet not do it is a sign of cowardice." He memorized them without understanding as a child, but they, along with Christian teachings he encountered in junior high school, would form his moral compass.

His strict upbringing, however, did not inspire him to dedicate his life to humanitarian work. He initially wanted to become an entomologist and thought about studying agriculture at university.

But it was clear that his father was opposed to that idea. Nakamura decided to become a doctor, instead, which he thought would be more acceptable, and he might be able to help people. 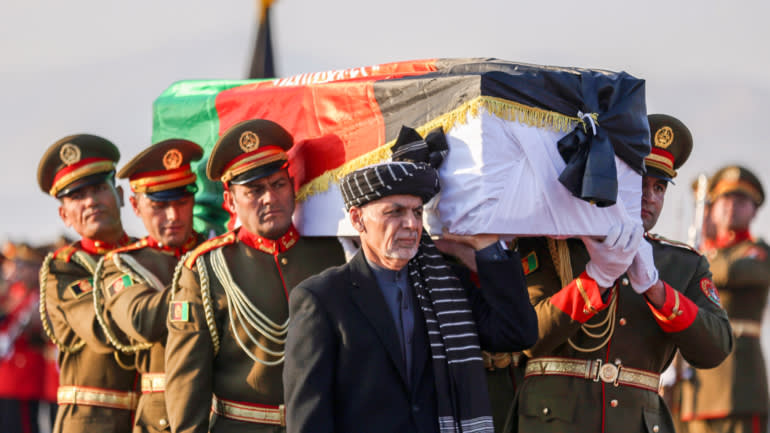 Afghan President Ashraf Ghani, foreground, and honor guards carry the coffin of Tetsu Nakamura during a Dec. 7 ceremony before transporting his body to Japan.   © AP

As a young man, Nakamura had no particular ideas about Afghanistan. After working as a psychiatrist in Japan, he went to Pakistan to treat leprosy patients in 1984. He had visited the country before, and he remained fond of it. He planned to return home after a six-year stint, but the dire situation stopped him from leaving.

Waves of refugees flowed into Pakistan from Afghanistan, driven out by the Soviet invasion. Refugee camps were plagued by diseases like malaria and tuberculosis.

Nakamura remembered thinking that it would be a doctor's good fortune to be able to serve in places like that. He eventually expanded his activities into Afghanistan, opening clinics in villages without doctors.

A major turning point came in 2000, when Afghanistan and other parts of Central Asia were struck by drought. Mothers with young children spent days walking to his clinics for help, and many children suffered from dysentery and typhoid fever.

In normal circumstances he could have saved many of them, but many of the children were also malnourished, and he saw one after another die.

He could not accept the situation.

After some reflection, he concluded that there were limits to what medicine could do for people. "You can't save lives unless there is enough food and water," he said.

He could have continued treating patients as they came to his clinics, or he could have sought support from the international community. Instead he started digging.

Nakamura started constructed a 25 km canal, under the slogan, "One canal instead of 100 clinics."

He was not a civil engineering expert, and there was no one locally that could help him. He taught himself how to draw plans, and then enlisted local farmers to help him build it, while he operated the heavy machinery.

The U.S. intervention of Afghanistan following the Sept. 11 terrorist attacks in 2001 caused the situation in the country to deteriorate even further, and international interest in the people's welfare after the drought quickly waned. Many aid groups left Afghanistan. Nakamura stayed.

Asked why he went so far to help the country, Nakamura looked puzzled. "You can't just leave people in serious trouble behind, can you?"

He seemed to be speaking candidly, but it was hard to take such an answer at face value. "I thought I'd regret if I didn't do all I could do to save people," he said when asked again. "I did it to satisfy my moral vanity, so to speak. I'm an old-fashioned person." 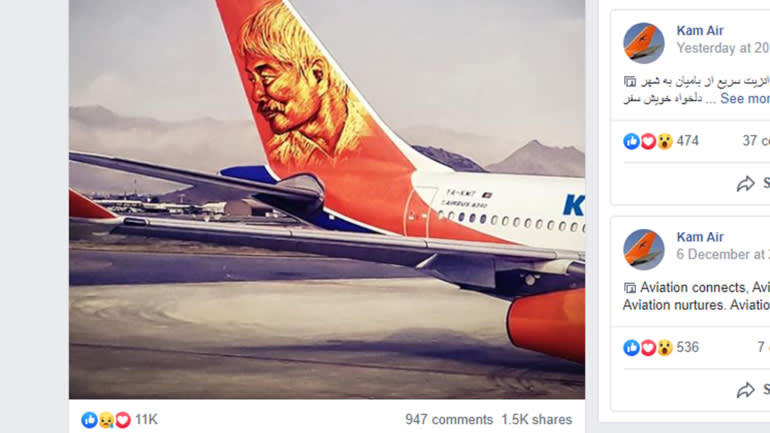 Kam Air posts on Facebook a photo of a portrait of Tetsu Nakamura on one of the company's planes. (Screen shot of Kam Air Facebook page)

Nakamura made a point of doing whatever was necessary. His motto was "to shine light into dark corners," which was a guiding principle for all his efforts as a humanitarian aid worker.

The canal was completed in 2010, turning about 16,000 hectares of arid land into fertile fields. The area is equivalent to 3% of the arable land in Afghanistan, and roughly 600,000 people live in the area.

Abandoned villages returned to life in what local people called a miracle. In February 2018, Nakamura was decorated by Afghan President Ashraf Ghani, who promised to expand the network of canals nationwide using Nakamura's approach, which he said held the key to the country's reconstruction.

Peshawar-kai, the Japanese nongovernmental organization founded by Nakamura that supports aid wok in Afghanistan, collects 200 million to 300 million yen ($1.84 million to $2.76 million) in donations annually. Most of the money comes from small donations from individuals.

Nakamura had said he would keep working until he turned 70. He was 73 when he was slain while teaching his techniques for building irrigation infrastructure to Afghans.

"The country is still affected by drought, and I can't just say goodbye to the people there, telling them to work on their own now," he said. "I've finally created a viable method, so I think spreading it will be my last job," he said before returning to Afghanistan at the end of September last year.