TOKYO -- When David Croll and his partners started building The Kyoto Distillery, the first in Japan dedicated exclusively to gin, in 2015, they had no idea that the company would spark a Japanese gin revolution.

Within a year of the release of Ki No Bi, Kyoto Distillery's award-winning gin, Nikka Whisky Distilling jumped into the gin game with Nikka Coffey Gin and Suntory Spirits introduced Suntory Roku a month later.

And in early March this year, French drinks giant Pernod Ricard announced a partnership with The Kyoto Distillery. The agreement promises "significant investment," which will be used to build a state-of-the art production facility and help meet growing demand for the popular brand.

Japan has found itself in the midst of a gin boom, with the number of domestic producers swelling to around 30 in 2019. Consumers overseas have acquired a taste for it: The value of Japanese gin exports rose to 2.28 billion yen ($21 million) in 2019, up 15% from the previous year, according to Japan's Ministry of Finance. For comparison, Japanese whisky exports were 15 billion yen in 2018.

The rise of Japanese gin has complex roots but follows the global gin revival that began nearly a decade ago and which will be celebrated this Saturday with World Gin Day. The international success of the craft beer movement, which flourished in the U.S. in the early 2000s, created an appetite for locally produced drinks that emphasized concepts of uniqueness and authenticity. The niche resonated with adventurous consumers who were interested in the provenance of products. As small and independent distilleries proliferated in the U.S., U.K. and across the European Union, craft spirits developed a following among the mixologists who led the cocktail renaissance in the 2010s. A prominent component of classic cocktails favored by hipster bartenders, gin was capable of showcasing a variety of flavors and styles, and artisanal versions began popping up at fashionable bars around the world.

At the same time, the popularity of Japanese whisky, which has seen year-on-year increases in shipments over the past decade, put Japan on the map as a producer of premium spirits, paving the way for Japanese gin in the international market.

Skyrocketing demand for Japanese whisky, which requires years of barrel maturation, has since outstripped production. Earlier this year, Nikka suspended sales of four varieties of its Taketsuru Pure Malt series, after discontinuing the single-malt series for both Yoichi and Miyagikyo brands in 2015. Suntory shelved Hakushu 12-Year-Old and Hibiki 17-Year-Old in 2018.

Faced with shortages, some makers are turning their attention to gin, which can be released in a matter of months. On March 10, Suntory introduced the second item in its gin line, Sui, an entry-level follow-up to the premium Roku brand.

"It makes sense for [Japanese whisky makers] to look around for something to sell while they wait for three years, in order to balance their portfolio," says Brian Ashcraft, author of "Japanese Whisky: The Ultimate Guide to the World's Most Desirable Spirit." "What's interesting about gin is that you see companies realizing in real time that they need to be fully prepared for all the different trends in the spirits segment." However, Ashcraft notes, gin has always been an important part of Japan's drinks history. In fact, it was the first Western-style spirit ever produced in Japan. In 1812, unable to receive shipments of gin from the Netherlands, the commissioner of the Dutch enclave in Nagasaki attempted to distill his own.

Among Japanese drinkers, part of the appeal of homegrown gin lies in the use of local ingredients. Ki No Bi derives its character from 11 botanicals -- such as yuzu citrus, sansho pepper leaves and umami-rich gyokuro green tea from Kyoto -- individually distilled before blending.

"The Japanese public loves Japanese products," Croll observes. "Consumers are loyal and want to support them because they feel like they understand the ingredients and appreciate the flavors." Craft gin producers across the country are running with the idea, creating an expanding array of innovative variations driven by local ingredients.

Many of the newer products have been developed by shochu -- grain-based Japanese spirit -- distilleries. A handful of sake breweries, such as Yucho Shuzo in Nara prefecture, which produces small-batch Kikka Gin at its Yamato Distillery, are also gaining a reputation for the spirit. Sake and umeshu (plum-wine) maker Nakano BC, which started as a soy sauce manufacturer, spikes its popular Kozue gin with Japanese pine needles.

On an evening in early March, the 500-bottle gin lineup at Tokyo Family Restaurant in Shibuya included 80 varieties of Japanese craft gin. Masahiro from Okinawa, made with bitter melon and guava leaves, displayed a pleasant earthy note. Hinata, produced by Kyoya Distiller and Brewer in Miyazaki, uses a base of sweet potato shochu flavored with native citrus, along with warm spices such as ginger and cardamom. Gifu prefecture's sharp and refreshing Tatsumi Distillery gin is handmade in wooden stills traditionally used for shochu in the Edo era. 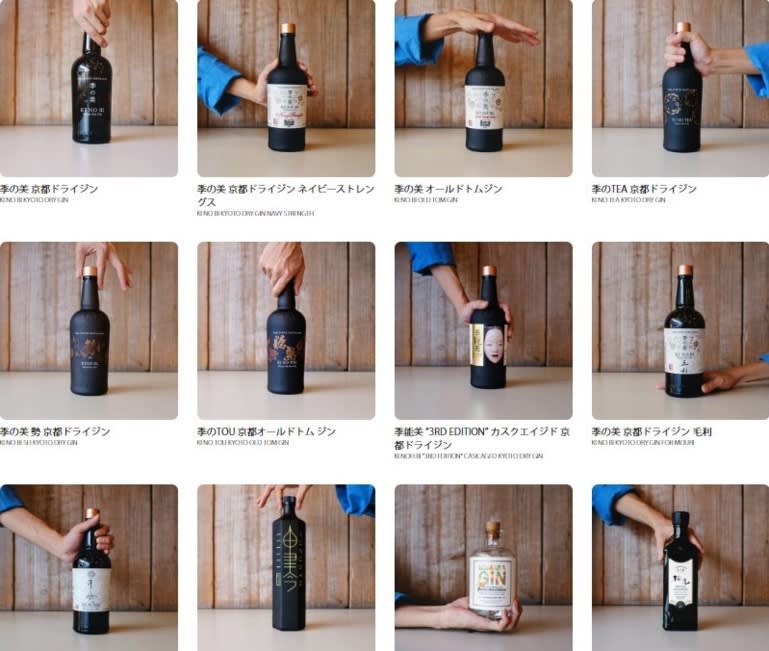 Other niche spirits made in Japan have started making waves in the past few years. Kiyomi white rum, produced by Helios Distillery in Okinawa, won a gold medal at the 2019 World Rum Awards, while star bartender Hiroyasu Kayama, of Bar Ben Fiddich in Tokyo, has collaborated with Mitosaya Botanical Distillery to create a boutique absinthe with herbs from his family's farm.

When asked if the trend could lead to another boom, Ashcraft hedges: "It's only natural that producers want to explore different avenues and drinkers will also want to explore, but I'm not sure if those will explode like Japanese whisky or gin."

Interest in Japanese gin, however, is poised to grow even further. On Saturday, World Gin Day, Japanese producers will feature prominently at Tokyo's annual Gin Festival, which will take place online this year via Instagram Live and Zoom instead of in person. For the virtual toast at the end of the event, I plan to raise a glass of Ki No Bi.