Japanese pop sensation Chai dance to their own beat

In the meticulously controlled world of J-pop, the foursome embrace a DIY spirit It's impossible not to get excited about anything and everything when you're around the four members of Chai. Mana, Kana, Yuuki and Yuna are infectiously upbeat to an extreme degree: They're gushing about the cafe we meet in, the cakes they are eating, the musicians they admire and the color pink. And they're especially effusive about each other.

A few things can get them down though: namely Japan's suffocating social norms and fixation on conventional cuteness. "The women on TV here have perfect noses, thin legs and big eyes," says lead vocalist Mana when we meet the band in Tokyo. "It's all about looks, not inner beauty."

Around the table the other members -- all in their 20s -- are nodding vigorously. "Japan's music industry is the same," says drummer Yuna. Bassist Yuuki pitches in: "We're angry deep down but when we create music, it's positive." Kana, the band's guitarist and Mana's twin sister, is next: "If our music was dark I don't think anybody would listen to our message."

Coming from a young band that's just hitting its stride, Chai's takedown of Japan's music scene seems bold, even risky. But their style choices and sound (all 1980s-esque synths, funky guitar licks and body-positive messaging) already put them at odds with the choreographed female idol troupes, hip-hop vocalists and fashion and beauty queens in the J-pop genre's mainstream. It's a huge, powerful industry that's difficult to upend -- and yet, with their quirky approach, Chai have managed to impress many Japanese fans. Music shops in the country ranked their first album as one of the top 10 of 2018 and the track "Boys Seco Men" was a Spotify Japan favorite.

The quartet sing in high-pitched voices, write lyrics that are a mishmash of Japanese and English and wear matching pink crop-top outfits onstage. "We know that we aren't the perfect models for cuteness," says Mana. "We want to wear pink proudly and we hope that other women like us, who don't feel they can pull it off, will think it's cool and wear it too." At concerts, Mana asks the crowd, "Do you have a complex?" Then she shares hers. "I have small eyes. I have short legs. But I'm neo-kawaii [their own phrase meaning "the new cute"]. Complexes are part of your charm." 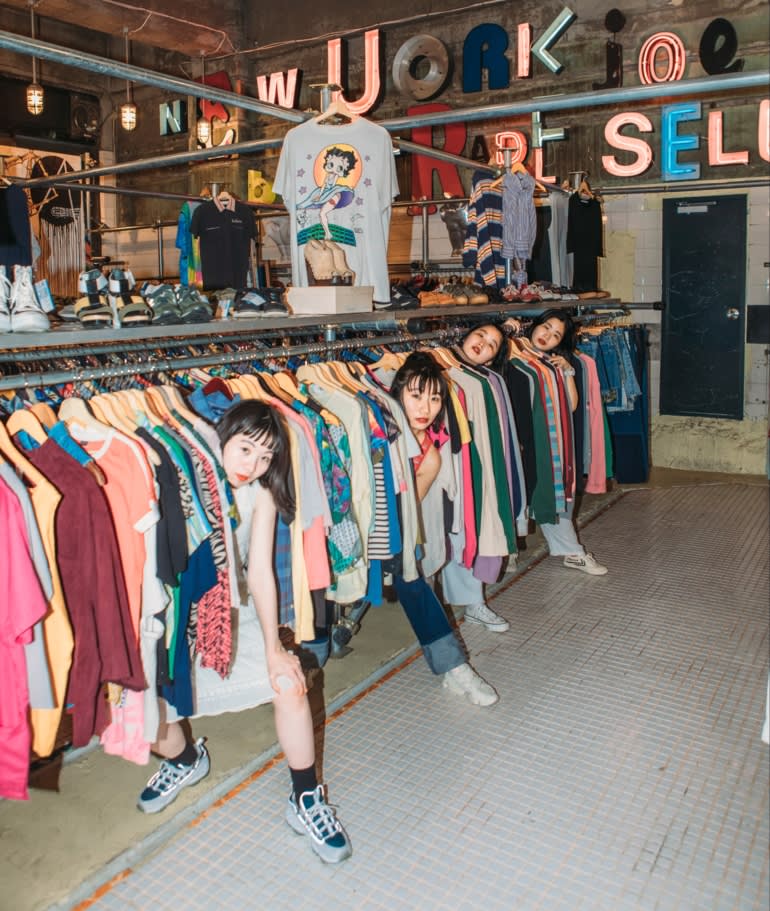 Despite its popularity, the group its resistant to becoming manicured like most of its J-pop contemporaries.

Since signing with Sony Music Entertainment's indie label Otemoyan Record, on Jisedai Rokku Kaihatsu Kenkyushitsu (Next-Generation Rock R&D Lab) in 2016, Chai have gone from playing for a few dozen people at small clubs in Japan to getting invited to festivals around the world. They have performed at events such as Fuji Rock, Primavera Sound, Pitchfork and South by Southwest and recently toured with Basement Jaxx in Japan and Superorganism in the U.K. By the end of 2019 the band will have traveled to China, Taiwan, the U.K., France, the Netherlands and Canada, and made two east-to-west trips across the U.S.

It all began in Nagoya, Mana and Kana's hometown, where the sisters later met Yuna and Yuuki. At first they played covers of Disney tunes but by 2015 they were writing music and traveling to clubs in Osaka and Tokyo. After a gig in the capital, several record labels showed an interest. "I'd arrived early for a different show but happened to catch Chai's performance," says Dai Ishikawa, of Jisedai Rokku Kaihatsu Kenkyushitsu. "I was totally bowled over." Ishikawa made Chai the label's first signing.

"We're angry deep down but when we create music, it's positive"

In 2019 the band released their second album, "Punk." The quartet admit that the title is a misnomer. Their music is pop with an edge and a hint of whatever's on their Spotify playlist, be it Basement Jaxx, Abba, Billie Eilish, Gorillaz, Tom Tom Club, Beastie Boys, Graham Central Station or the Jackson Sisters.

Despite its popularity, the group is resistant to becoming manicured like most of its J-pop contemporaries. Their creative output is still very much an independent, collaborative effort: Mana comes up with the melodies, Kana finds the chords, Yuuki writes lyrics and Yuna defines the rhythms. Their albums and concert merchandise also feature Yuuki's illustrations. The quartet are so close that, initially, they were all living together in a cramped Tokyo apartment; considering the average size of houses in the city, that speaks of a genuine dedication to one another that many other bands probably wouldn't be able to muster.

Though all four members are wary of mainstream fame -- they refuse to share their surnames -- they aren't shy about their dream of a Grammy win. "It would be a kind of validation for us," says Mana. The fact they are managing to make their voices heard in the loud world of Japanese music is validation enough.