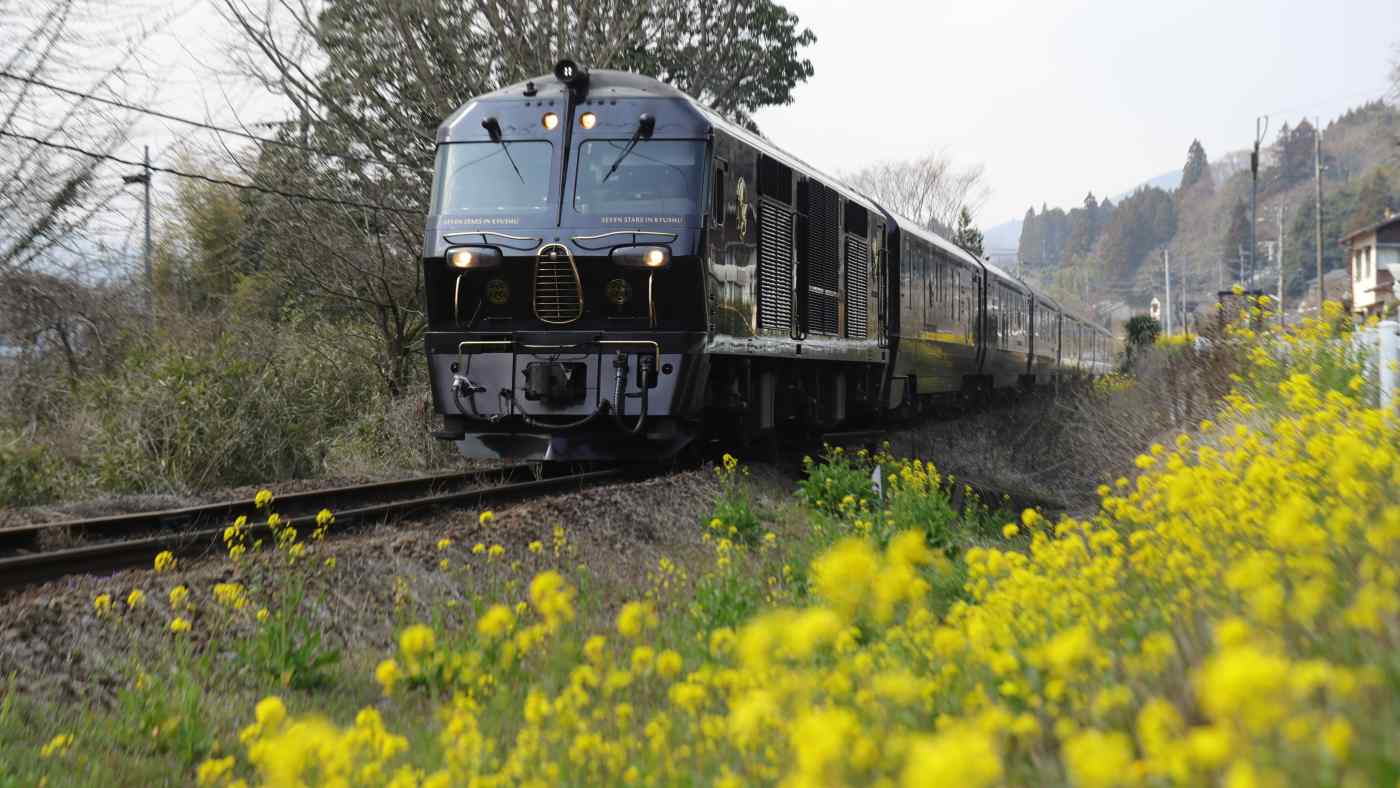 A train trip in provincial Japan is not everyone's idea of a super-exclusive holiday. Japanese railways are generally better known for their ability to move millions of passengers smoothly around a crowded country than pampering a very few.

But a super-exclusive holiday is precisely what is offered by the Seven Stars train on the southern island of Kyushu. It is exclusive in price, at a minimum of 315,000 yen a person for a one-night, two-day trip. And it is exclusive in access -- most places on the 30-berth service are oversubscribed by a ratio of 10 to one, or 60 to one in the top deluxe suite, which sits at the back of the train and offers a panoramic window looking out over the Kyushu countryside.

For most passengers, the names of the lucky participants are drawn out of a proverbial hat. Some unfortunate losers keep trying for years in the hope of finally securing their ticket to railway paradise.

The journey begins at the main railway station in Fukuoka, Kyushu's biggest city and the modern gateway to a region steeped in history. High-speed train links to Tokyo and an international airport lend easy access to visitors, Japanese and foreign alike.

Travelers are greeted with much bowing from the immaculately uniformed staff, a round of formal introductions and a glass of bubbly. The multi-tasking train crew deal with the luggage while passengers are guided politely to the platform. The train stands ready, its old-fashioned brown bodywork, polished and gleaming. Inside, it offers a nod to the classic age of steam with wood paneling, deep carpets and period-style fittings. But it is mostly a modern take on tradition, with comfortable beds that fold into armchairs during the day, subtle lighting and bathrooms complete with rain showers. Forget cramped cubby holes; this train has space and style.

Designer Eiji Mitooka has drawn extensively on Japanese crafts, including marquetry, weaving and ceramics. Japanese porcelain -- produced, of course, in Kyushu -- figures prominently, from the delicate tea cups in the dining car to brightly-painted washbowls in the loos.

It is no accident that the first and longest stop on the journey is Arita, a renowned center of Japanese ceramics, where potters mastered making porcelain in the early 17th century. Following in the footsteps of Chinese and Korean predecessors, Japanese craftsmen created a unique highly decorated style that became popular in Europe, where it was known as Imari. 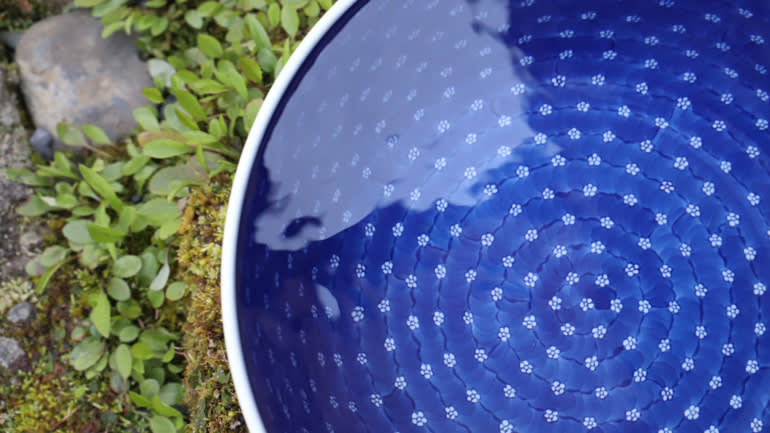 Arita porcelain dates back to the 17th century. (Photo by Ken Kobayashi)

Modern Arita is a jumble of old and new, clustered around a historic central street, where there is a sufficient concentration of pre-industrial buildings for a decent historical walkabout. Among the many ceramics shops stands the Fukagawa family's factory, its faded pink-painted clapboard walls and rusting metal gates speaking to its age and to the industry's commercial challenges. Production manager Yasushi Fukagawa, whose family built its first kiln in 1650, says that demand has been by hit by low-cost competition. However, he adds: "The customers who know what Arita porcelain is, they still come."

Among them is the Japanese imperial household, which has ordered special ware for the forthcoming ceremonies marking the abdication of 85-year-old Emperor Akihito and the accession of his son, Prince Naruhito. For the moment, the Fukagawa kiln is busy.

But there is little time to chat, as the Seven Stars party has to rejoin the bus that has brought us from the railway station and now stands ready to deliver us back.

There are three other stops on the weekend trip. One is a rather bizarre interlude at Nagasaki. There is no time to visit the historic city, which was for centuries the only port open to foreigners in Japan and is the tragic site of the second of the two nuclear bomb attacks that ended World War II.

Instead, we are treated to a Chinese-style dance show on the station platform. While the dancer is entertaining enough, with some mesmerizing tricks and face masks to portray different characters, it seems odd to miss seeing the city itself.

The two other breaks work out better. At Bungomori, we have a chance to stretch our legs in the small junction town surrounded by central Kyushu's mountainous landscape. The hazy light makes for atmospheric photographs in which the hills loom out of the mist like huge tree stumps, their trunks cut down by a giant. And indeed there is a local folk tale along these lines, recorded by the Bungamori region's most famous son, Takehiko Kurushima, a writer of children's stories who is known as Japan's Hans Christian Andersen.

But the main sights are for railway enthusiasts. Pride of place goes to a restored steam locomotive, the first produced in Japan, in 1919. Yoshinobu Kubo, a retired engineering professor and self-professed train fan, explains that the engine, which stands in front of a historic railway roundhouse, was left to rust before it was rescued and lovingly restored. "We look after the locomotive and polish it ourselves every week," he says, as he pushes a remote control button that makes the engine puff steam and blow its horn. The final stop is the hot spring resort of Yufuin, a charming collection of inns, restaurants and tourist stores that on weekends throngs with visitors, including many from China and South Korea. For foreign travelers, it is a great chance to see Japanese people taking a break from their often-busy working lives. The weather is warm, and delicious ice creams flavored with green tea and black sesame are selling well. Those who wish, can rent kimonos and pose for pictures by the town's pretty lake. Others can just take photos -- although don't be fooled -- most of the visitors dressing up are not Japanese.

In between the stops, the Seven Stars journey offers plenty of time to survey the landscape. At its best this offers a mosaic of rice paddies, overlooked by cypress trees and volcanic mountains. There is also a sublime seaside stretch where the track hugs the coast of Omura Bay, near Nagasaki, and the train seems to run on the water. At other times, there is too much evidence of Japan's neglect of planning controls, with ugly pre-fabricated buildings, scrambled overhead cables and garish billboards. But it helps foreign visitors to better understand Japan -- there was a price paid for all that high-speed industrial growth. The sun sets over Oumura Bay, near Nagasaki. (Photo by Ken Kobayashi)

The one-night trip focuses on western Kyushu. It alternates with a three-night journey that concentrates on eastern and central Kyushu, taking in the live volcano of Sakurajima.

We travel through the landscape anything but anonymously. Bystanders wave as we go past, children especially. We are greeted at stops by welcome parties of pint-size uniformed guards saluting our arrival. It would be embarrassing were it not for their evident excitement. One grandmother, who accompanied her five-year-old grandson, says; "It's wonderful for the children to play like this." But all this activity outside the carriages should not distract from one of the train's undoubted onboard luxuries -- the high-quality cuisine. The one-night trip involves four meals, starting and finishing with lunch. A different team of chefs, drawn from local restaurants, come on board to prepare each repast, 22 courses altogether. The colors of Japanese-style borscht (Photo by Ken Kobayashi) As an unschooled gourmet, I enjoyed everything. The highlight perhaps was the second lunch, presented by the Hosun restaurant in Oita. It included a deep-red Yufuin borscht, wonderful in its simple fusion of Japanese and western cooking. The food was accompanied by an ample range of sakes, wines and spirits, all included in the price. Those who want to reach into the alcoholic stratosphere can buy Dom Perignon, Chateau Latour and similar rarities. Music with a postprandial drink (Photo by Ken Kobayashi)

Dinner is leisurely, starting with aperitifs and ending with post-prandial drinks, among them hard-to-find Japanese whiskeys. Glass in hand, relaxing to live piano music, I start wondering who might best enjoy this trip.

Kyushu Railway, the operator, puts the passengers' average age at 64. This is logical -- there is no room here for dancing, or for children running around. So far the travelers have been overwhelmingly Japanese, plus visitors from Taiwan, South Korea and elsewhere in Asia. But the company is encouraging more foreign visitors, including from the U.S. and Europe. 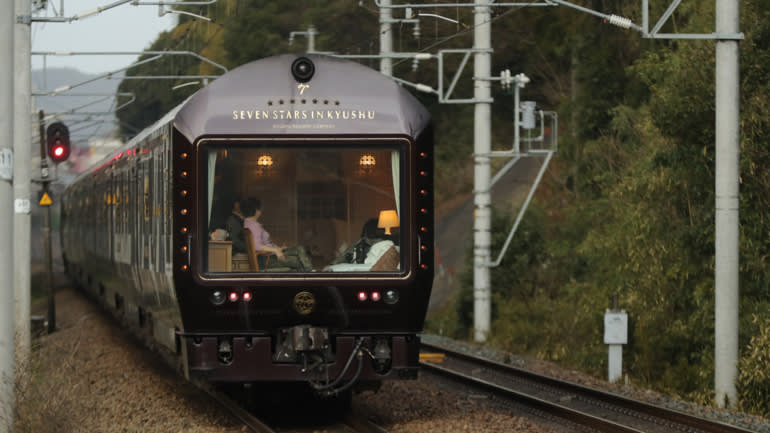 The Seven offers bystanders a glimpse of its luxury. (Photo by Ken Kobayashi)

Those making a once-in-a-lifetime journey to Japan should bear in mind that they will not see much of Kyushu's main sights. But they will experience the highest levels of Japanese hospitality in a form that is more accessible than is sometimes the case in, for example, a traditional ryokan, where the rules can seem forbidding. So, is it worth it? If you have this sort of money to spend on a holiday, the answer is definitely yes. It will be quite different to any other super-exclusive holiday you may have had.

Stefan Wagstyl traveled as a guest of Kyushu Railway.