An archaeology professor flees the classroom to lecture in the streets Seeking the answer, a 17-member team scours the lanes behind the Kolkata Police's headquarters on a recent autumn morning. Brown, an Anglo-Indian paramour of a rich Bengali cloth merchant, was found dead on Amherst Street, dressed in a beautiful silk sari and expensive jewelry but with no shoes.

The trail has long since gone cold; the murder took place more than 200 years ago.

The motley gathering winds its way through busy bazaars and narrow lanes with unruffled enthusiasm. They are not investigators but walkers exploring little-known sides to the megacity as part of a tour organized by Heritage Walk Calcutta.

The self-described "academic-run, research-oriented company" offers offbeat explorations of the city by foot. The sensational murder case of Rose Brown is part of the startup's popular Murder and Mayhem Walk, which takes tour-goers through some of the headline-grabbing criminal cases of the 19th century and tells the history of the city's policing and criminal justice system along the way. A colonial-era building where the murderer of the wife of a Jewish trader was arrested -- a nugget from Heritage Walk Calcutta's Murder and Mayhem walk. (Photo by Anuradha Sharma)

Brown's murder led the Calcutta Police to open a detective department in 1868.

"We set up the tour company with the basic objective to bridge the gap between academics and the common people, and to make knowledge accessible to the general public," said co-founder Tathagata Neogi, 33.

Neogi holds a doctorate in archaeology from the University of Exeter, the U.K., and is "extremely passionate" about the history and the rich cultural heritage of Kolkata, the city he grew up in. He decided to go into business -- an "unlikely choice" given his background in academics -- after noticing a dearth of well-researched, affordable tours of the city that was once the capital of British India.

Along with his wife, Chelsea McGill, 29, Neogi launched Heritage Walks Calcutta in February 2017, stepping away from an archaeology teaching job at the Kerala Council for Historical Research.

"We realized that academics is much removed from the general public, and the city's interesting history is mostly confined to books and classroom lectures," said McGill, a linguistic anthropologist from the University of Chicago. "Through the tours we wanted to take our original, high-quality research to the masses and show them the Kolkata that the usual tour operators generally miss."

The walks, Neogi said, are "not so much about places" as they are about stories.

Murder and Mayhem has walkers chase powerful characters and navigate the narratives of sensational murders and intrigues that once took Calcutta by storm. 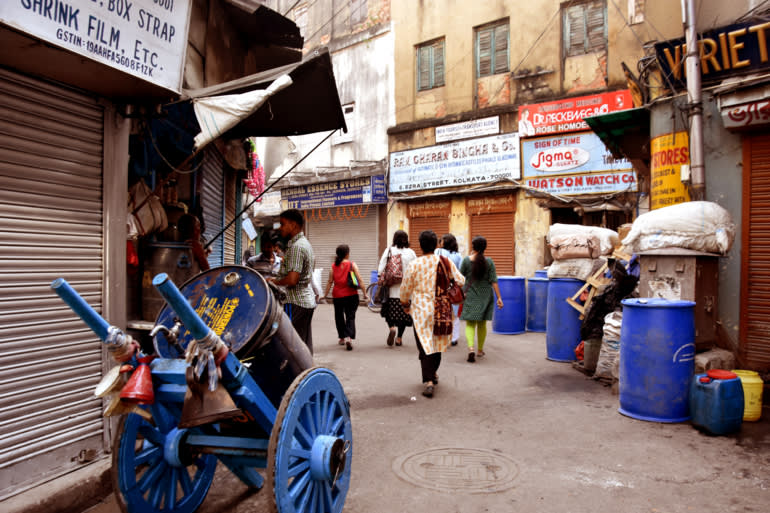 Murder and Mayhem tour-goers walk through what was once the Jewish quarters of Kolkata. (Photo by Anuradha Sharma)

The tour also discusses the Pollock Street case, one of the first to use forensics to determine the killer of Mariam Leah Judah, the wife of a rich Jewish opium trader. The walkers are given a tour of the crumbling colonial-era house in which the Nasseem Shallome Gubboy, the lady's distant relative and lover, lived -- and where he was arrested.

A major draw of the expedition is the story of Troilokyo, who went from being widowed at 14 to taking up prostitution to transforming into a con-woman and coldblooded serial killer. It's the stuff of potboilers.

Crisscrossing the famous Chitpur Road, now known as Rabindra Sarani, the tour takes participants through the narrow lanes and by-lanes of the old city, the Jewish quarters in Kolkata's trading hub, Burrabazar, one of India's largest wholesale markets.

Another tour -- Books, Bans & Institutions: The College Street Walk -- takes a look at the evolution of the Bengali language and printing, and how College Street, famous for Presidency University and its expanse of bookshops, "became the venue for both experimentation and suppression, by both the colonizer and the colonized," according to Heritage Walk Calcutta's website.

Calcutta had thriving slave markets in the mid-18th century; this little-known fact is a highlight of the Chitpur Road Walk. Another walk -- Second World War, Famine and Riots: A Divided City -- tells the "forgotten tales" of the city's role in the war.

"Currently, we are working on a tour themed on the Naxalite (Maoist) Movement (1969), focusing on the students, who were a huge part of it," said intern Sachika Ghosh, a master's student of modern history at Calcutta University.

"These walks have helped me look at my city differently," said Sukti Sarkar, an assistant manager with the Reserve Bank of India who has done all of Heritage Walk Calcutta's tours. "The same streets that I had been passing all the 60 years of my life in this city now resonate differently with me, thanks to the new perspectives I've gained through these walks. I have come to know and understand my city better." She became interested in walking tours after her travels to the West, where taking similar treks inspired her to learn more of her hometown. "Our infrastructure is lacking and some sites are not well-maintained," she said. "But you learn to rise above these things as to explore the stories behind them."

Since the inaugural walk, to the South Park Street cemetery with a group of 20, Heritage Walk Calcutta has conducted more than 200 tours for more than 1,500 "explorers," of whom 40% are foreign tourists, mostly backpackers from the U.S., U.K. and Australia. The majority of the company's customers are locals.

"We have deliberately kept the prices low so that our walks are affordable to local residents," Neogi said. A typical Heritage Walk Calcutta group tour costs about 650 rupees ($9) per head, almost one-third the price of a walking tour by Calcutta Walks, one of the city's oldest and most famous guided tour companies.

Exploring Kolkata on foot has gained popularity in the past two decades or so. "Initially, there were only about two walking-tour leaders; now there are about eight companies and 25 leaders operating in this field," said Raj Basu, the founder-director of Help Tourism, one of the leading tour companies in eastern India.

Heritage Walk Calcutta is trying to carve a niche for itself with tours that use academic research to tell little-known stories. "I think they are extremely innovative, combining the physical present and with the non-tangible experiences of past," Basu said.

These kind of walking tours, Basu said, will go a long way toward building an image of Kolkata as a city with a rich legacy and heritage.

As Neogi said, "This is our own way of making Kolkata meaningful."