Legacy of a tai chi master Mak Tai-kwong, 90, pictured during his working days at Hong Kong's She Wong Lam snake soup shop. He credits a lucky break there in 1948 as having changed his life.
MATHEW SCOTT, Contributing writerMay 23, 2021 08:00 JST | Hong Kong
CopyCopied

HONG KONG -- Ninety-year-old Mak Tai-kwong looks and moves like a man decades younger. He attributes tai chi to saving his life and prolonging it.

In 1948, when the people of Hong Kong were struggling with chronic food shortages in the aftermath of World War II and work was scarce even for those willing and able, Mak said a lucky break at the She Wong Lam snake soup shop in the then-portside suburb of Sheung Wan changed his life.

"I was very weak, and had no food to eat," said Mak who was 18 in 1948. "Life was hard but I got the job selling snake soup and the snake shop owner saw how weak I was and he paid for me to learn tai chi. In 1948, I started learning Yang style tai chi, and I learned from Tung Ying-chieh, and that's why I am still here today."

This year marks the 60th death anniversary of Tung (1897-1961), who helped take the Yang style of tai chi to the world as it became arguably the most popular form of the martial art practised. Apart from Hong Kong actor Donnie Yuen and his Chinese peer Jet Li, American rock star Lou Reed, of Velvet Underground fame, was also a famous tai chi student.

In December, the centuries-old practice of tai chi -- or taijiquan in Mandarin -- was officially recognized by UNESCO as an "intangible cultural heritage." There are five main schools of the martial art -- Chen, Wu Hao, Wu, Sun and Yang. 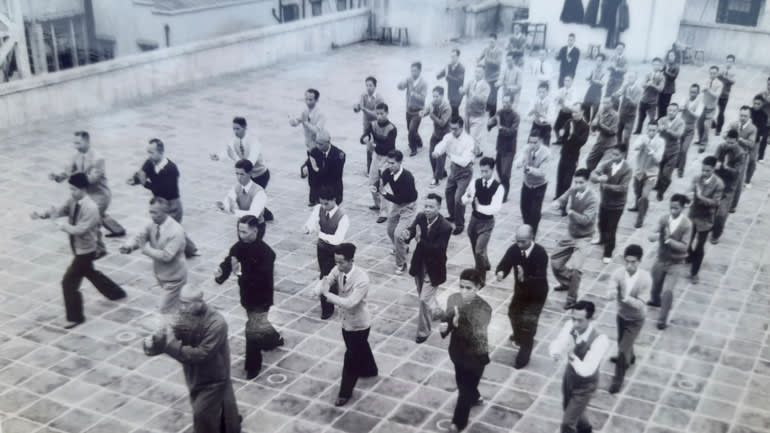 Top: Tung Ying-chieh (seated) established tai chi schools in Hong Kong before taking his teachings to other cities in Asia. Bottom: One such tai chi school was in Bangkok, Thailand.

Tai chi is estimatedto be practiced daily by hundreds of millions of people globally. But back in the 1940s, tai chi was unheard of outside China.

A generation of tai chi masters had over the two decades after WWII gravitated south to Hong Kong from across China to escape political upheavals that led to civil war in the country. Tung was one of them.

Tung, a disciple of Yang Ch'eng-fu (1883-1936), helped develop the Yang style of tai chi based on the teachings of the founders of the martial art -- the Chen family in central Henan Province -- that evolved from combat skills and self-defense (considered to be external to the body) to heath and meditative benefits (internal).

In the early days, Tung had a reputation as a bruiser. Legend has it that Tung took on and beat a British boxer who dwarfed him in size in Nanjing in the 1930s. He then shared his winnings among fans and fellow martial artists.

After seeing out the war in the relative safety of Macao, which was then neutral territory as a Portuguese colony, Tung started opening tai chi schools in Hong Kong.

Now his "empire" extends to the U.S. "He had great teachers, with a lot of skill," explained Tung's great-grandson Alex Dong, who runs the Alex Dong International Taijiquan Association of more than 100 teachers from New York City. 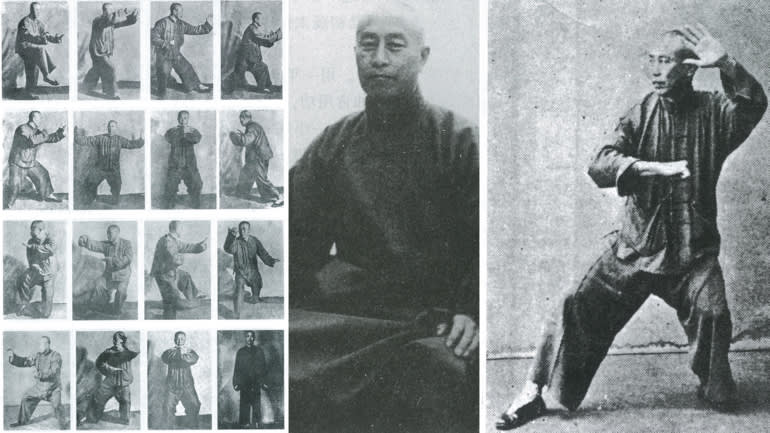 Top: Scenes from one of the many tai chi guide books authored by Tung Ying-chieh (middle). Bottom: Tung travelled regularly to meet with his students to help them master the art of tai chi.

Tung's fighting days were over by the time he opened his Hong Kong schools, and had started to travel through Asia to share his more peaceful methods, although he still enjoyed the thrill of a battle.

On Jan. 17, 1954, Tung helped organize and played the role of ringside referee for an infamous "Death Duel," the lead-up to which had held Hong Kong in its grip. It was staged between Tung's tai chi student Wu Gongyi and a student of the “white crane” style of kung fu, Chen Kefu, after weeks of press hype.

After less than two tepid rounds of action, a draw was called but the true purpose of the fight was served. According to local media, including the South China Morning Post, more than 200,000 Hong Kong dollars ($35,000) had been raised for the 50,000 victims of a fire that had recently ripped through the Shek Kip Mei squatter village in Hong Kong.

After less than two tepid rounds of action, a draw was called but the true purpose of the fight was served. More than 200,000 Hong Kong dollars had been raised for the 50,000 victims of a fire that had recently ripped through the Shek Kip Mei squatter village in Hong Kong.

"We all knew he was strong but he was a very kind man, amiable and very approachable," recalled Mak in Victoria Park. "He was quite a solemn person, not easily angered."

Tai chi's recognition by Unesco took close to a decade of lobbying from China, and from followers of the form. Dong said it was long overdue.

"When people practice tai chi they always tell me they feel better," Dong said. "I always tell my students tai chi is one of the few exercises that teaches you about you. It gives you the chance to feel your own thoughts, recognize you own movement and your way of thinking."

Among those daily participants in Victoria Park is 65-year-old Fanny Tung-cheng, who was married to Tung's great grandson Tung Kwai-sun before he passed away in 1994.

"Yang tai chi is popular because it is based on a fighting style and also it is basic," she said. "Practising every day keeps you active and healthy and that's the way we should all live our lives."