Kisenosato ascends to championship after years of struggle TOKYO -- A late bloomer like his mentor, sumo wrestler Kisenosato has won the title of yokozuna after traveling a lengthy, bumpy road.

He is the first Japan-born sumo wrestler to ascend to the sport's highest rank in 19 years. Mongolians and an American have dominated the position after Wakanohana III, who became a yokozuna in 1998.

This new homegrown star, with his stoic dedication to the traditional Japanese sport, is seen invigorating the Grand Sumo tournaments.

View from the top

Kisenosato secured the championship on Jan. 21, the second-to-last day of the 15-day January tournament. Back in the dressing room, he shed tears of relief, as if he were finally freed from a bed of thorns. 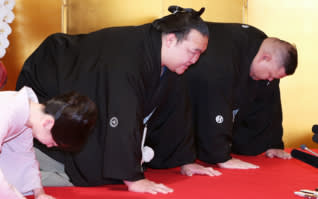 Japanese sumo wrestler Kisenosato, center, bows with his stablemaster Tagonoura, right, as messengers from the Japan Sumo Association bring him official notice of his promotion to yokozuna on Jan. 25 in Tokyo. (Photo by Tomoki Mera)

He had come in second to the champion 12 times, causing as many sighs by his fans. On Wednesday, sumo organization Nihon Sumo Kyokai formally named Kisenosato a yokozuna as it decided the ranking of the spring tournament to open in March.

Kisenosato's strict yet observant late stablemaster Naruto helped his journey when the wrestler struggled to make the second-highest rank of Ozeki. In 2010, when he was still a Maegashira, the lowest rank of the Makuuchi top division of wrestlers, Naruto made the shocking remark that Kisenosato "doesn't like practice very much." This was right before a tournament in Fukuoka Prefecture that began that November.

Kisenosato trained under a particularly strict stable that mandated two sets of practices by noon. The stablemaster was apparently talking not about the volume of practice but attitude. Repeating the shiko practice of lifting and lowering legs alternately to strengthen the lower body, for instance, is a solitary struggle unattended by anyone and requires strong initiative.

Kisenosato "turns weak in defense but goes on the offensive when the opponent is under pressure," Naruto said about his disciple.

A major focus of the November 2010 tournament in Fukuoka was whether yokozuna Hakuho would top the historic record of 69 consecutive victories by Futabayama, a famous yokozuna who retired in 1945.

Just a year after the Fukuoka match, Naruto suddenly passed away. Using his sorrow as a springboard, Kisenosato continued his quest, finally rising to the rank of Ozeki.

The journey since then was filled with trial and error as well. In his continued battle to rise higher, Kisenosato discovered new aspects of practicing outside his home stable and in the shiko exercise. Inspired by the monumental victories of fellow Japanese wrestlers Kotoshogiku and Goeido in 2016, Kisenosato has made his dream a reality. He finally won the championship in the 31st tournament after becoming an Ozeki. This is a culmination of 15 years of perseverance. 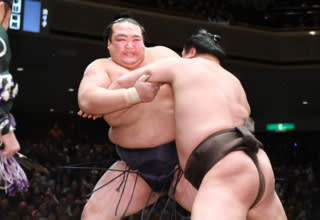 Stablemaster Naruto, who was himself a yokozuna by the name of Takanosato, is also known for undergoing great struggles. While battling diabetes, he left his record of 16 wins and 12 loses to rival yokozuna Chiyonofuji. Like his late master, Kisenosato became a yokozuna after reaching age 30. But yokozuna Wakanohana I often said that "real power manifests after age 30."

Kisenosato has inherited the untainted, stoic spirit of the Nishonoseki school of sumo that has been passed on over generations, as is apparent in his distaste for collusion among wrestlers and the influence of the entertainment industry. Hopes are rising that this new Japanese yokozuna will reinvigorate the world of sumo.