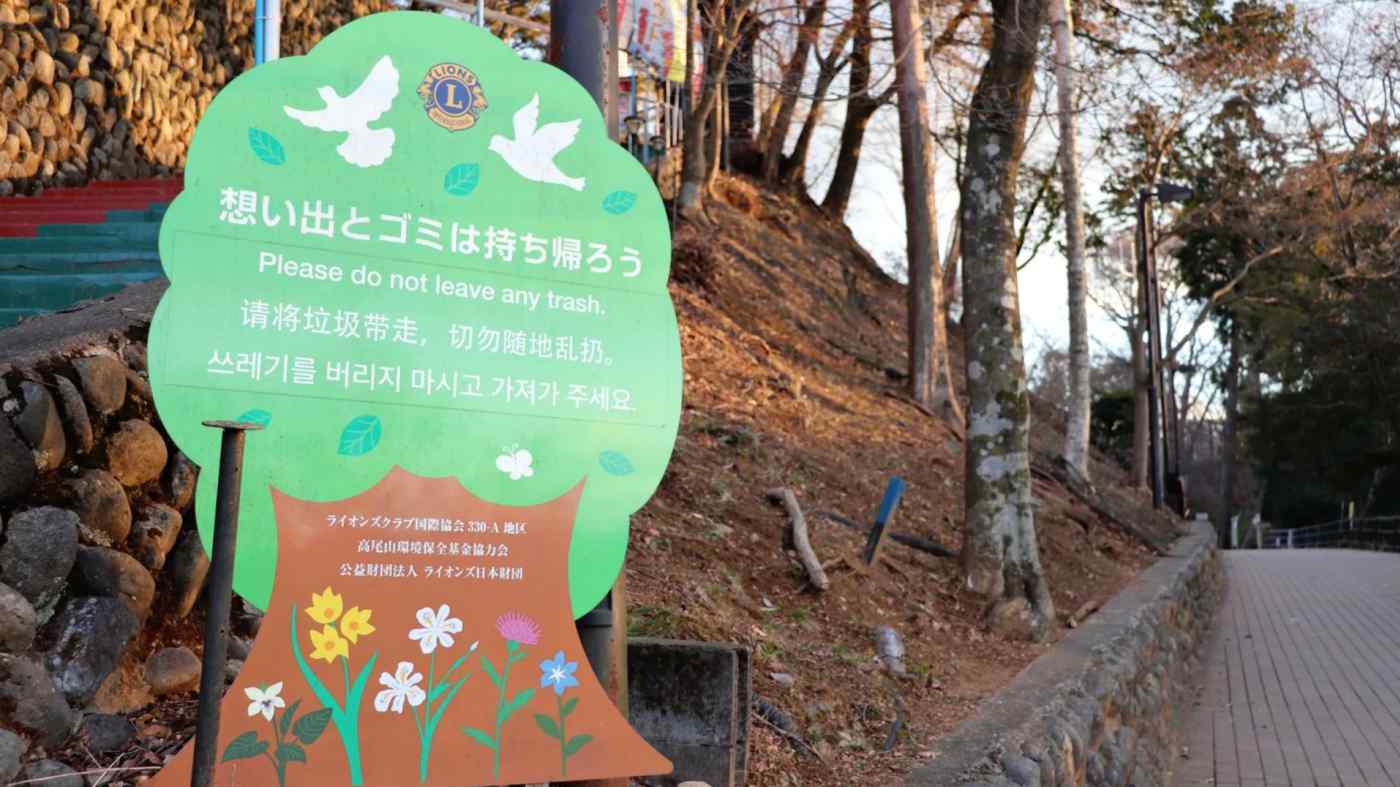 The original version of this sign on Mount Takao in western Tokyo told Chinese hikers: "Go home if you do not throw away your trash." (Photo by Satsuki Kaneko)
SHOSUKE KATO and SATSUKI KANEKO, Nikkei staff writersMay 19, 2019 15:00 JST | Japan
CopyCopied

TOKYO -- Imagine you are a Chinese tourist visiting Japan for the first time. Your travels take you to Osaka and the 40-story Umeda Sky Building, with its fine views of the city. After awhile, you look for the exit and are confronted with the following sign in Chinese: "Ni tui chu." ("You get out of here.")

That is just what happened back in January, touching off a small uproar on Chinese social media. "Don't they respect the Chinese language?" commented one outraged netizen.

When it comes to signage meant to help visitors from abroad, Japan is kinder than many countries, putting up signs in many public places, often in multiple foreign languages. Unfortunately, the messages sometimes go awry. Blame the garbled communications on online translation services and software, and a failure to run the final product by someone who actually understands the language.

Not only do poorly translated signs leave overseas tourists giggling or scratching their heads, they can sometimes cause offense, leaving international travelers ill-disposed toward their hosts -- hardly what Japan, which is keen to grow its tourism industry, wants to do.

The company that manages the building in Osaka was at first blissfully unaware of the gaffe, which was produced by a machine translation of a Japanese sign that said: "Okaeri guchi," or "Way out."

"The mistranslation used Chinese characters that mean "exit" in Japanese, so we hadn't the slightest idea that anything was wrong. It came as a shock when we realized what it meant [in Chinese]," said an abashed company spokesman.

Sadly, examples of such well-intentioned messages going haywire are not uncommon in Japan. Tokyo Metro, which operates a subway network in the city, also discovered that posters it put up in stations to warn passengers about a safety hazard were no help at all. The message in Chinese read: "It is dangerous to disperse the focus of your attention while walking." What Tokyo Metro wanted to say was: "Do not operate electronic devices while walking." Somehow the Chinese translation left the gadgets out entirely.

"Anything written in Chinese grabs my attention, but I don't understand what the posters are trying to say," said Wang Jiwen, a tourist from Shanghai.

Osaka Metro, which operates a subway system in the western Japanese city, launched English, Chinese, Korean, and Thai versions of its website in September 2018. But relying on translation software to convert the original Japanese website into these languages was a mistake.

The company was soon forced to pull the foreign-language versions after it found a number of embarrassing mistranslations. In the English version, for example, the Sakaisuji Line was rendered "Sakai Muscle Line," and Tengachaya Station became "World Teahouse." The odd wording came from literal translations of place names.

Jiang Zihao, a tourist from Beijing visiting Osaka with friends in late March, pointed out that strange translations on restaurant menus, for example, could confuse customers, souring an otherwise pleasant trip. The 22-year-old Jiang recalled one restaurant in Osaka's Minami district that had a menu item in Chinese that read: "Noodles that got into a fight with a cow in Japanese style."

"I didn't order it. You never know what you might be served," Jiang said.

Administrators of Mount Takao, a peak in western Tokyo that is popular with foreign tourists, were alerted by visitors to a message in Chinese that was both rude and bizarre, repeated on about 30 multilingual signs set up along the trails. They read: "Go home if you do not throw away trash." It was supposed to be a translation of a slogan familiar to Japanese hikers: "Take home your trash, along with your good memories." The administrators covered up the offending sentences and later corrected the signboards.

A 28-year-old Taiwanese tourist said the tone of the signs did not match his impression of Japanese. "My perception is that Japanese are basically polite and kind, but it sounded aggressive."

"Mistranslations can rub people the wrong way and could leave them with a bad image of Japan," said Hiroyuki Ishibashi, president of Icos, a Tokyo company that translates messages for signage.

"Machine translations have improved, but you still need to get them checked by both specialists and native speakers," said Yutaka Furukawa, a scholar of modern Chinese language and a professor at Osaka University's School of Foreign Studies.

A recent Tourism Agency report highlights the heavy reliance on machine translation by Japan's railway companies. The study, conducted in February and March, examined signs at major stations and on company websites to determine whether they were helpful to foreign visitors.

The research identified patterns of mistranslation for various languages, and a number of instances where the intended message would not come across. Machine translations were found to be the culprit.

Examples of translations that went wrong included "forgotten center" for "lost-and-found," and "dwarf" for "child."

Along 80 routes that passengers take when changing trains at major stations, 79 were found to have signs giving directions in English, in addition to Japanese. Fifty others also had translations in Chinese and Korean.

The report said the increased use of multilingual signs was a positive development, but pointed out areas that need improvement. For example, instructions on how to board trains were missing in locations where they were needed.