LAHAD DATU, Malaysia -- With hundreds of kilometers of beaches and tropical islands, and a forested interior teeming with wildlife such as orangutans, sun bears and pygmy elephants, the state of Sabah in Malaysian Borneo is a tourism hot spot.

In 2018, Sabah's tourism revenue was the highest of any Malaysian state at 8.3 billion ringgit ($2 billion) with a record 3.9 million arrivals, including half a million Chinese. The state welcomed 1.03 million visitors in the first quarter of 2019 -- up 9% on the same period last year, according to the Sabah Tourism Board (STB).

Most tourists stick to shopping and island-hopping in Kota Kinabalu, the state capital; climbing Mount Kinabalu, which at 4,095 meters is Southeast Asia's highest peak; visiting orangutan and sun bear rehabilitation centers near Sandakan; or diving off the Semporna archipelago.

But this standard itinerary may be set to change following the launch of high-end private tours in the lesser known southeastern districts of Lahad Datu and Tawau, which feature pockets of primary rainforest untouched by mass tourism. "Since Kota Kinabalu is now receiving high numbers of visitors, STB is focused on pushing them toward the east coast of Sabah, including Lahad Datu," said spokesperson of STB.

The slow development of tourism in Lahad Datu district may be a consequence of international travel warnings after a military conflict in Sabah in February 2013, when 235 militants from the Sulu islands, part of the neighboring Philippines, attacked and occupied the Malaysian village of Tanduo, claiming to be enforcing a long-standing Filipino claim to parts of the state.

Since then, however, no further confrontations have taken place and the area has been declared stable. "Our product division department is identifying new tourism products in Lahad Datu that are ready to be promoted and marketed, while other areas with potential are being studied to ensure their feasibility to be opened up as tourists attractions," said Forsythe. 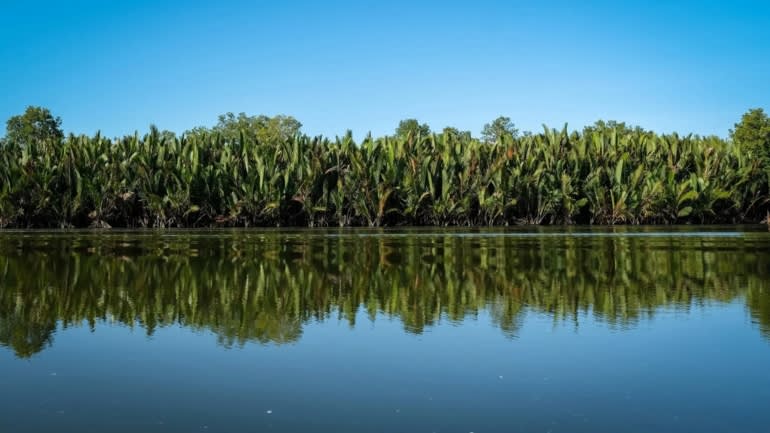 The serenity of Sungai Kapur, where mass tourism has not arrived. (Photo by Chan Kit Yeng)

One of the new tourism offerings is a river safari in Sungai Kapur, a coastal mangrove area in the eastern corner of the Tabin Wildlife Reserve, about two hours' drive east of Lahad Datu. River tours started about a year ago thanks to the joint efforts of two local hospitality providers and tour operators, Bike and Tours, and Tabin Lodge and Wildlife Rainforest Tour, which are working with Sabah's Forestry Department.

"The department believes that Sungai Kapur has great potential to become a prime nature tourism destination in the eastern part of Sabah," said Yong Szu Cherng, a planning officer at the forestry department in Sandakan. Yong admitted that the region may not be ready for large-scale tourism due to still-poor accessibility, safety issues and legal barriers to tourism in the forest. But the area is slowly attracting interest, drawing about 100 foreign tourists in less than a year.

For three days and two nights, guests spend most of their time floating on the Kapur river and its labyrinthine side channels. The focus is on encounters with rare wildlife such as Borneo pygmy elephants, crocodiles, orangutans, flying foxes and the area's many bird species. Seafood buffets are served fresh by local fishermen from Kampung Meruap, a stilted village perched on the reserve's easternmost fringe, facing the Sulu Sea. 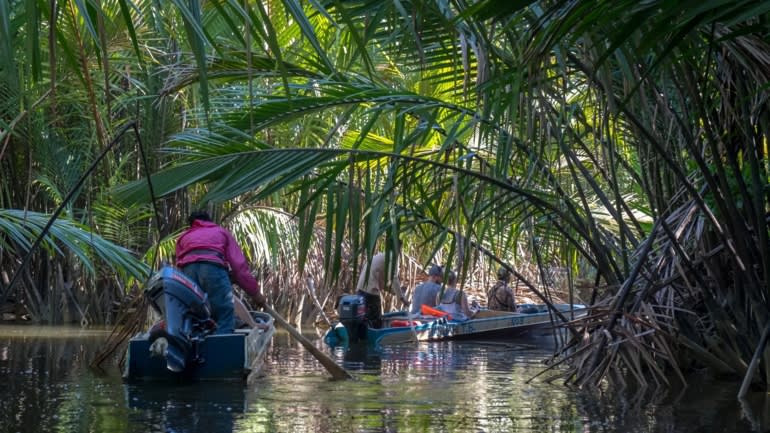 Exploring the small side channels in the Sungai Kapur forest reserve. Guests are guided by local Sulu fishermen. (Photo by Kit Yeng Chan)

"The local community have been positive toward the arrival of the first tourists," said Simon Werren, the Swiss co-owner of Bike and Tours. "They are very enthusiastic as this is their first exposure to the tourism industry, and they realize they can benefit from it in terms of job opportunities and economic means."

The Sungai Kapur river exploration costs 2,700 ringgit per person, all inclusive. "One-third of this sum goes directly to the people of Kampung Meruap as salary and [for a] village development fund," said Teo Yan Hock of Tabin Lodge. "The tours help this remote village make a sustainable income with tourism, educating them as to why they should protect their surrounding natural environment." Kampung Meruap is the only village within the Sungai Kapur reserve. (Courtesy of Simon Werren)

Kuala Lumpur-born Itisha Ismail, Werren's wife and co-founder of Bike and Tours, said that "thus far guests have been very accepting after we make it transparent that, since Sungai Kapur is a primary rainforest, there are plenty of spots for the animals to hide, and they may not see anything when they get there." Beside the Sungai Kapur tours, the couple run a boutique bed-and-breakfast inn in a secluded Lahad Datu neighborhood which boasts a private swimming pool and a cluster of large, comfortable rooms. A wild orangutan at Bukit Piton, where a degraded forest hosts some 300 primates. (Photo by Kit Yeng Chan)

The two companies are also organizing wildlife safaris in Bukit Piton, a degraded forest area to the north of Lahad Datu that is inhabited by about 300 wild orangutans. The animals are isolated by palm oil plantations extending to the north and east and the Segama river to the south. In 2007 the Malaysian arm of WWF, a global wildlife charity, started reforestation work in the area by planting fast-growing pioneer species, restoring 2,266 hectares of Bukit Piton by 2017.

Werren, Ismail and Teo have continued the reforestation efforts and offer a jeep safari to spot orangutans up close. Elephants, dozens of bird species and slow lorises -- a nocturnal primate -- can also be seen. Groups can return to stay at the Bike and Tours inn or sleep in a more basic forest cottage if they wish to experience the jungle by night. Sustainable luxury ecotourism is also picking up in Tawau, another less-visited southern district a couple of hours' drive from Lahad Datu. The town has boutique accommodation at ROOMS in Kubota Square -- a sleek hotel with large suites mixing chic furnishings with warm wood floors and corridors plastered with modern art -- and there is a new ecotourism project about an hour out of town.

The Plant4Borneo Elephants safari seeks to use tourism to preserve herds of pygmy elephants that graze on nearby plantation grounds owned by Sabah Softwoods, a state-controlled timber and palm oil producer that mostly grows tropical trees. The elephants come from nearby areas as they migrate looking for food, and have found an ideal habitat in the plantation's large grounds and varied crops. Launched by Sabah Softwoods and 1StopBorneo Wildlife, a local nongovernmental organization, the project uses tourism revenues to protect the elephants and recreate their natural habitat by planting native trees. The target is to create a wildlife corridor over the next 10 to 20 years that will give the animals access to the nearby Danum Valley forest reserve.

"We must grasp today's reality: Many wild elephants are forced to live in plantations, and initiatives like ours can help save them with tourism revenues," said Shavez Cheema, co-founder of 1StopBorneo Wildlife, who offers the elephant safari as part of a two-day tour to the nearby Tawau Hills Park forest reserve.

At a cost of 1,250 ringgit per person, guests stay in a wooden chalet on the estate, featuring a swimming pool lined with swaying palm trees. Up to 80% of the profits are reinvested in elephant conservation and a plant nursery project, according to Cheema.

For the moment, eastern Sabah's ecotourism caters mostly to high-spending tourists, but it may expand to other segments of the market as demand rises.

"All nature lovers are most welcome as long as they are willing to pay for this conservation trip," said Cheema. "We have no other choice, as costs are dictated by the local stakeholders, plus having to hire many local drivers, guides, nursery and ground staff. Hopefully we'll be able to reduce [our costs per person] with more tourist arrivals."