TOKYO -- Short trips on luxury trains have taken off in Japan. As the population gets older and commuter numbers face a decline, the country's railway operators are looking for new ways to make money from the country's extensive rail network.

"Everything was great, from the view to the live music on board," said a Tokyoite in his 50s who had taken the Royal Express with his wife.

The train starts from Yokohama, southwest of the capital, and heads down to Shimoda at the tip of Izu, a peninsula jutting southward into the Pacific.

Operator Tokyu launched the service as a way to boost usage of a line run by its subsidiary Izukyu, which offers panoramic ocean views as it winds its way along the scenic eastern coast of the peninsula. The whole journey takes about three hours and the couple's trip included one night in the historic city. The wooden seats and flooring give the car interiors the feel of a luxury hotel and passengers are treated to haute cuisine under the stained-glass ceiling of the restaurant car.

"We had such a great time on the Seven Stars in Kyushu," said the man's wife, referring to a similar train in southwestern Japan that is considered the height of luxury. "So when we were planning a short trip this time, I told him I wanted to take another luxury train."

One-way fares range from 25,000 yen to 35,000 yen ($220 to $310), depending on the meal choice. An overnight package including round-trip tickets, a stay at a traditional Japanese hot-spring hotel and admission to local attractions can go for up to 200,000 yen.

The service has proved extremely popular, with demand for tickets reaching 20 times the 100 available seats on a single run. 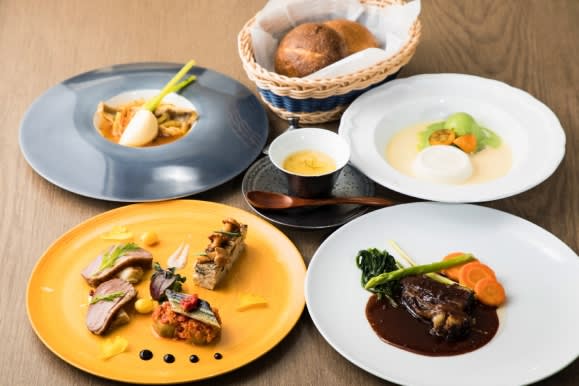 Launched in April 2016, Seibu Railway's Fifty-two Seats of Happiness restaurant train makes a limited number of trips and only operates on weekends, running north from either Shinjuku or Ikebukuro in Tokyo to the tourist hot spot of Chichibu, Saitama Prefecture.

Passengers are served a brunch of porcini mushroom soup with risotto and roast local-variety Bushu pork during the three-hour outbound ride.

The dinner menu for the trip back to Tokyo is even more enticing, featuring an hors d'oeuvre made with the area's specialty spring onions and a main course of locally reared wagyu beef stewed in red wine.

A one-way trip including food costs from 10,000 yen to 15,000 yen, but getting your hands on a ticket might not be so easy; the specially designed four-car train is fully booked for the next three months, a Seibu Railway spokesperson said.

The design of the cars is the work of architect Kengo Kuma, the man behind the main stadium for the Tokyo 2020 Olympics, and the interiors feature folk craft and wood from areas along the line.

Every detail of the experience appears tailor made. Even the on-board music features original compositions by renowned jazz-fusion keyboardist Minoru Mukaiya -- a keen railway enthusiast.

Over in western Japan, Kintetsu Railway's Blue Symphony train takes passengers from Abenobashi in the city of Osaka to Yoshino in the mountains of Nara Prefecture for a surcharge of just 720 yen.

The trip takes one hour and 20 minutes, during which passengers get to enjoy local sweets and sake at the bar in the central lounge car.

The train attracted 72,500 passengers in 12 months after making its first trip in September 2016, comfortably exceeding the company's target of 60,000. Most passengers tend to be couples in their 50s or older or groups of ladies. A key attraction of the Royal Express is its luxurious interiors.

Back in Tokyo, foreign tourists are the target market for Tobu Railway's Revaty limited express linking Asakusa with the Kinugawa spa resort and Nikko, Tochigi Prefecture, which debuted this past spring. The cars all have free Wi-Fi and every seat has access to a power socket, so recharging phones or using laptops is never a problem.

Railway companies have been launching these luxury services out of concern about the aging of Japan's population. For now, railway usage remains brisk. A total of 10.2 billion journeys were made on Japan's 16 largest private railways in the year ended March 2017, the highest figure ever and up 1% from a year earlier.

But over time, the number of students and commuters traveling by train is likely to decline, and so too will commuter pass purchases -- a key source of revenue.

According to a recent survey by Tokyo ad agency Hakuhodo, over 50% of respondents in their 40s to 60s now prefer to travel independently -- as opposed to opting for the group tours that were popular in the past.

Luxury train services are increasingly tapping into latent demand, said Noriko Yagasaki, associate professor at Toyo University's Department of International Tourism Management. It is not hard to see why.