Myanmar's most popular sportsman, Aung La Nsang says the political strife in his native country has left him feeling helpless: "But what I can do is put on a great show for the fans," says the Florida-based MMA fighter. (Image courtesy ONE Championship)
MATHEW SCOTT, Contributing writerApril 29, 2021 09:30 JST | Myanmar
CopyCopied

SINGAPORE -- Myanmar's mixed martial arts champion Aung La Nsang is trying to remain fully focused on his upcoming fight but thoughts of the turmoil afflicting his homeland have his attention turned to the other side of the world.

The 35-year-old fighter says he feels "helpless" and "depressed" by the situation in Myanmar.

"But what I can do is put on a great show for the fans," says the Florida-based Aung La. "I can be the best version of myself and hopefully it inspires and it helps in a small way to get people through these dark times."

Aung La has been in daily contact with family and friends in Myanmar ever since the military seized total control of the country on Feb. 1.

As arguably Myanmar's most popular sportsman -- ever -- Aung La has a following through social media platforms that numbers in the millions. He's also one of the few Myanmar citizens with an international profile, given the country only began opening up to the outside world over the last decade. All that changed with the coup.

Aung La has been trying to keep in touch with his fans online -- predominantly from Myanmar's younger generations -- who have reached out to him over the past few weeks after and who have in the past drawn so much inspiration from his remarkable rise in the international sporting arena.

The conversations haven't always been friendly, Aung La reveals, given the fact that among his fans are young people who have witnessed the deaths of over 700 people during the protests that have followed the coup, and are looking for answers -- and help.

"As a person with so many followers I feel like I should be able to do more, but it's beyond my powers. A lot of my fans haven't understood that," Aung La says.

"I'm a father and a husband but I'm not a politician. I don't have the ability to make this go away. Some of [the fans] have said nasty things, said I should be ashamed of myself, especially in that first week of February. It was sad to see people turn to hate. It's something I have no control over and I know they are angry and helpless. I want things to end, just like they do." 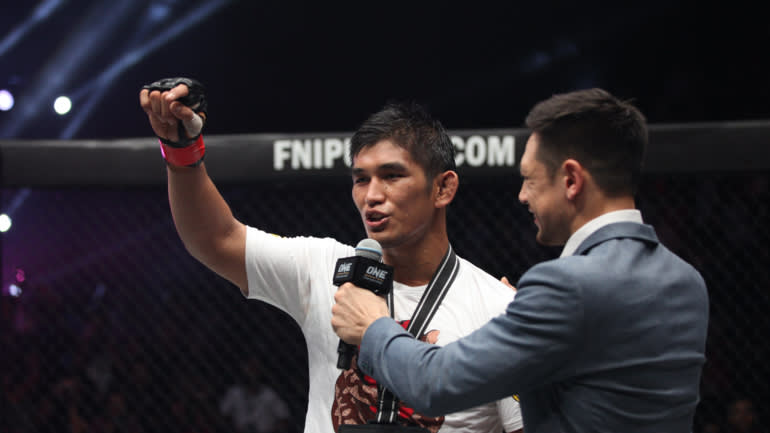 Aung La currently reigns over the light heavyweight division of the Singapore-based ONE Championship martial arts promotion, one that sells itself as Asia's largest in a sport that claims to be the fastest-growing on the planet.

Back on June 30, 2017, inside Yangon's aging Thuwunna National Indoor Stadium, Aung La became the first fighter from his nation to capture a title in MMA, and the first from Myanmar to rise to the top of any global sport.

Aung La was the subject of unprecedented national attention in the lead-up to the fight with Russia's then-middleweight champion Vitaly Bigdash, with billboards across Yangon featuring massive portraits of the two fighters. In the hours leading up to the bout there were thousands of people lining Waizayantar Road en route to the stadium, crowding its car park, and snapping up souvenirs such as the "Burmese Python" T-shirts that carry the Aung La's fighting name.

That Aung La almost knocked out Bigdash in the first round, before going on to take a unanimous points decision over the previously unbeaten Russian, raised the voices of the 10,000 fans inside the stadium to the rafters, burnishing the growing legend of a fighter who previously spent time in the U.S. as an itinerant beekeeper before finding his calling in MMA.

"That single fight made me who I am today," says Aung La. "It was the pivotal moment in my career. I was so scared for that fight. I put everything into it in training camp. When it came time I put every single ounce of myself into it. I knew what it meant to my fans as well."

After that victory, Aung La immediately called for unity across his often-fractured nation, and was soon feted by Myanmar's military leaders as well as de facto civilian leader Aung San Suu Kyi -- who is now being held by the junta. Aung La also had a bronze statue of his likeness erected inside the Kachin National Manau Park, near his hometown of Myitkyina.

It was from that city of around 150,000 in the northern Kachin State that Aung La's family originally escaped, first to Yangon and then to seek political asylum in the U.S. By the early 2000s, Aung La's had moved to Maryland to start their lives over again.

In a country riven by ethnic conflict, the fact that Aung La's family is part of the Kachin ethnic group -- which has waged a long battle with successive central governments -- meant that just staying in the country would have guaranteed an uncertain future.

"Moving to the United States really lit a fire under me, to be just thankful for what we have here," says Aung La, who went on to study agriculture science in Michigan in 2004, with dreams of one day starting a farm back in Myanmar. "It made me work harder for my dreams. I want to show people you can chase your dreams." Since its foundation in 2011, One Championship has raised more than $275 million from investors that include Sequoia Capital and Temasek Holdings, Singapore's sovereign wealth fund. A $166 million Series D round in October 2018 pushed its valuation to over $1 billion. (Images courtesy ONE Championship)

Aung La turned to martial arts during college, first as a hobby, training in Brazilian jujitsu before expanding his training into the diverse cross-code combat skills set needed to be a full-time MMA fighter. He had become somewhat of a journeyman on the MMA circuit in the U.S. before he was contacted by the people at One Championship.

Aung La signed on in 2014 and it proved a life-changing decision. He beat Bigdash for the ONE middleweight title, and in 2018 added the organization's light heavyweight division belt to his collection.

While Aung La's fame grew in Myanmar, and across Asia, he was always able to escape the limelight to a life of relative anonymity in the U.S., first in Maryland and more recently in South Florida, where he now lives with his wife and two young children.

Aung La will return to the ONE Championship cage at the Singapore Indoor Stadium, to face the 30-year-old Dutchman Reinier de Ridder, with the "Burmese Python" putting his light heavyweight title on the line.

These two have history. After a run of three title defenses, Aung La surrendered his ONE middleweight crown in a shock loss to De Ridder last October.

The event is only the second-ever ONE Championship card to be broadcast live on America's TNT network, and the combat sports world will be watching. As will Aung La's family, friends, and fans back home in Myanmar.

"It's been hard," says Aung La. "No one knows what is going to happen and at the time all this is happening you still have to put work into your own craft, your own life. My craft is being the best mixed martial artist I can be. I put decades of my life into this art, into mixed martial arts. I think they can see that and I can't believe the amount of support I get, and I want to keep winning for myself and for my fans."