From Nebbiolo to Cannonau, Franciacorta and Prosecco, signature wines from Italy have found appreciation in the restaurants and wine bars of the Southeast Asian nation, even though most of the population does not drink alcohol.

About 61% of Malaysia's 32 million citizens are Muslims, whose religion prohibits alcohol consumption, but wine, beer and spirits are all popular in the country, particularly among the non-Muslim minority, which is largely composed of ethnic Chinese and Indians. A partial lockdown imposed to fight COVID-19 hit bar and restaurant sales earlier in the year, but businesses have begun to recover since restrictions were lifted on May 4.

"If Indians prefer whisky and beer, Malaysian Chinese are the biggest consumers of mid- to high-quality wine because they are used to spending for quality experiences, are well-traveled, and don't have particular eating restrictions like Malay Muslims, and hence can pair full-bodied red wines even with pork," says Marco Bassa, the Italian wine "ambassador" for Kuala Lumpur-based wine and spirit retailer Cuore Italiano.

Bassa's main target is to persuade young and educated Chinese-Malaysians, many of whom drink wine as a status symbol in luxury establishments, to switch to upmarket Italian wines from popular -- and cheaper -- Australian brands, which have a taxation advantage because of a bilateral trade agreement signed in 2013. 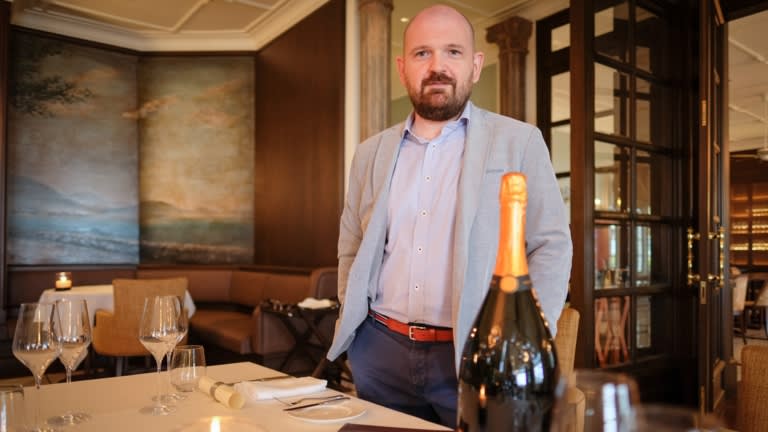 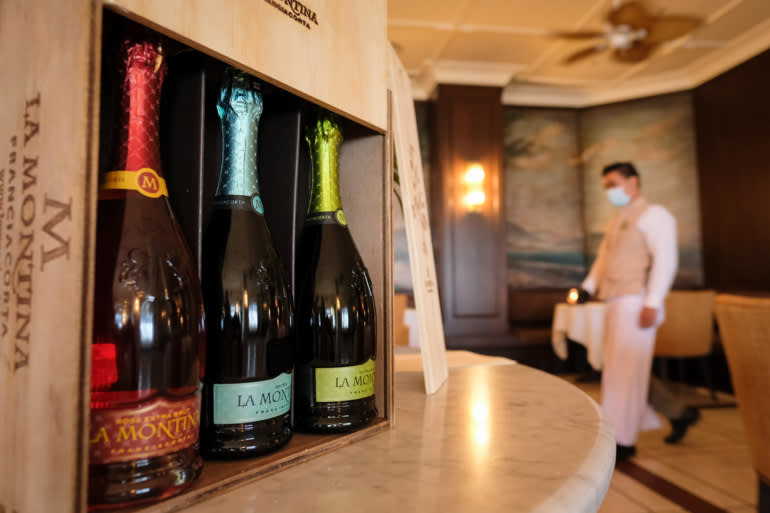 Top: Italian wine ambassador Marco Bassa at the Eastern & Oriental Hotel. His venture Cuore Italiano works directly with about 20 Italian canteens to bring some of the best Italian bottles to Malaysia. Bottom: Despite COVID-19 restrictions, the hotel is in business offering Italian Franciacorta to its well-heeled clientele. (Photos by Kit Yeng Chan)

Australian wines dominate the Malaysian market, with 44.5% of sales in 2015, according to the latest available figures from the Australian Trade and Investment Commission, followed by French, Chilean and Italian brands. However, Italian winemakers see their relatively low market share as an opportunity, especially in light of the growing interest in pairing Italian wines with local food.

"Believe it or not, a Negroamaro Rosato (a rose wine from Puglia, in southern Italy) pairs very well with our roasted pork belly," says Teng Wei Liek, manager of the Barn group, which runs glitzy wine bars with fire grills in six Kuala Lumpur shopping malls and another in George Town. "We give our patrons the opportunity to widen their drinking horizons," says Teng. "With the vast variety of grapes available in Italy, it would take them a lifetime to taste them all."

Susanna Grassi, owner of I Fabbri, which has been producing organic Chianti Classico in the central Italian region of Tuscany since 1620, says she exports about 1,500 bottles a year to Malaysia's mid- to high-range hotels and restaurants -- considerably less than she sells in more mature Asian markets like Japan. 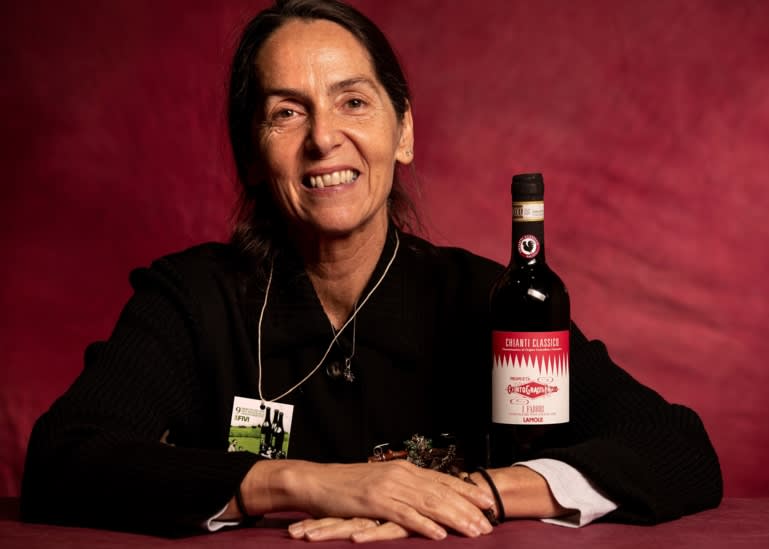 After working in fashion, Susanna Grassi went back to her family's Tuscan estate, Casole, in the late '90s and has produced first-class Chianti ever since. (Photo courtesy of Susanna Grassi)

"But Malaysia is a niche market, hence it's not about quantity but quality," says Cristina Ferrari, the co-owner and marketing manager of Corte Aleardi, which produces Valpolicella red wine near Verona, in the northern Italian region of Veneto. Ferrari, who says that during Italy's COVID-19 lockdown she focused on mailing crates of wine to homebound Scandinavians, had to postpone her first business trip to Malaysia in May because of travel restrictions. Grassi and Ferrari are among 20 Italian winemakers working with Bassa on popularizing Italian wines by promoting customized gastronomic boutique experiences that pair high-quality Italian wines with local food. "I realized that by offering lesser-known, high-quality wines at affordable prices, and bringing in local food as a familiar middle ground, local wine connoisseurs would start to appreciate these new varieties they had never tried before," says Bassa.

One of the most recent events was a wine soiree promoted in June by Bassa and George Town's Eastern & Oriental Hotel, a luxurious ocean-facing property opened in 1889 by the Iranian-Armenian Sarkies brothers. The night's concept was to pair Lombardy's sparkling white Franciacorta with local Penang Baba Nyonya food, rich in textured curries and spices.

"We are honored that a Malaysian icon like the Eastern & Oriental Hotel listed our wines in their menu," says Michele Bozza, who produces artisanal Franciacorta at La Montina in Monticelli Brusati, a small town near Brescia, in northern Italy. "Franciacorta is very versatile, with a punch," says Bozza. "Its light acidity, floral and fruity fragrance adapt well to any type of fish, white meat, vegetables and fried foods." Cuore Italiano's boutique concept is also established in Kuala Lumpur, where many patrons of the city's well-choreographed upscale environments are looking for different experiences. Important wine-focused venues such as Vintry, Jarrod & Rawlins, Gooddam and Perfect Cellar have embraced Bassa's philosophy and are using wine and Malaysian dishes, including street food, to add interest to their menus.

"Malaysians have become more aware and familiar with Italian wines because they are very approachable, and a lot of restaurants are putting them on their lists beside French, Spanish, Australian and New Zealand bottles," say Miki Maria Lie and Daniel Yeap, the manager and the Italy-trained chef of Gooddam, a bistro in Petaling Jaya, just outside Kuala Lumpur. They offer Bassa's artisanal Italian imports paired with recipes from the north Italian region of Piedmont, which Yeap localizes by using Malaysian ingredients.

Wong Yin-How, managing director of four Vintry Group restaurants and bars in Kuala Lumpur, which offer more than 1,000 international wines, says he is convinced that Italian grapes and Malaysian food match perfectly. "Italian whites ranging from the medium sweet Moscato to the dry but elegant whites of Alto Adige, to the more herb-tinged varieties of central and southern Italy, all offer freshness and versatility to match much of the spicier and strongly flavored Malaysian foods," says Wong. He also recommends combining Sauvignon Blanc from Alto Adige with poached Hainanese chicken rice or dark soy-tinged Kuala Lumpur Hokkien Mee, a Vintry signature dish. "Wines made from the Sangiovese grape, in all its expressions from Tuscany, have the dark cherry flavor and freshness to pair with a range of local meat dishes like Bak Kut Teh, a robust herbal meat dish, or even beef rendang, a slow-braised hearty Malay dish, much loved in our country," Wong says.

For Italian winemakers struggling to recover from the economic fallout from a severe COVID-19 outbreak, the small but promising Malaysian market is a source of hope and optimism. "Malaysia is a new frontier and the chance to find new combinations and pairings between our wines and their food is extremely interesting," says Ferrari.

"Without exaggeration," she adds, "it's all about striking the right balance between Italian wines of character, and specific Malaysian foods."