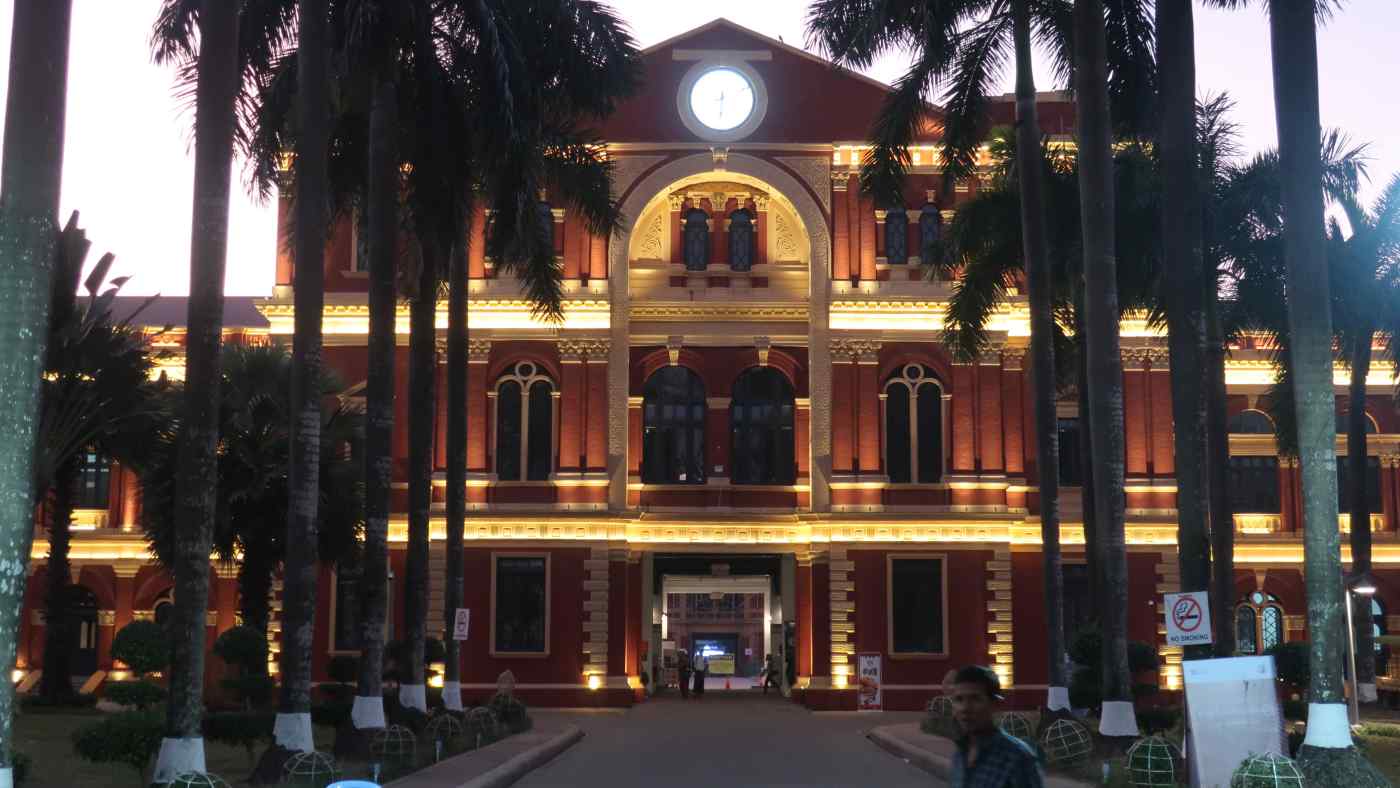 The Secretariat Building at dusk: The Yangon landmark was farmed out to the private sector for renovation and commercial use to help cover the estimated $4 billion construction bill for the new capital, Naypyitaw. (Peter Janssen)
PETER JANSSEN, Contributing writerMarch 11, 2020 14:02 JST | Myanmar
CopyCopied

YANGON -- The partially renovated Secretariat Building in Myanmar's commercial capital -- one of the most magnificent colonial-era structures in Southeast Asia -- opened its doors to the public in November after 15 years of disuse. But the future of this controversial monument to British rule remains unclear, despite its potential role as an iconic cultural center for heritage tourists.

The building, known as the Ministers' Building after Myanmar (formerly Burma) gained independence in 1948, lost its relevance when the military regime of Senior Gen. Than Shwe unveiled the purpose-built new capital of Naypyitaw in 2005.

The Secretariat was one of a score of so-called heritage buildings in Yangon (formerly Rangoon) farmed out to the private sector for renovation and commercial use in 2011-14 in an effort to raise money to help cover the estimated $4 billion construction bill for the new capital.

Several of these newly renovated architectural gems have come to the market in the last two years, including the Yangon Excelsior Hotel (the former Steel Brothers Corp. building), and the all-teak Pegu Club, which is currently an event space but is scheduled to open the historic Pegu bar at the end of the year. The Rosewood Yangon, formerly the New Law Courts Building, partially opened in November.

But the Secretariat, which covers 6.5 hectares of land in downtown Yangon, is the largest of the lot -- and the most controversial in terms of the commercialization of its history. "It's a sensitive building from the government and public perception," said Richard Emerson, managing director of Yangon-based Emerson Real Estate, the realtor handling rental opportunities in the building.

The Secretariat is a colossus of British colonialism. Constructed in stages between 1889 and 1905, it was begun shortly after Britain annexed upper Burma in 1886, taking control of the entire country. It was also the site of the declaration of Myanmar's independence from Britain on Jan. 4, 1948, following an agreement with London a year earlier.

But the Secretariat is still best remembered for the July 19, 1947, assassination of the independence leader Aung San, father of Myanmar's current leader, Aung San Suu Kyi, and several other people during a meeting of the pre-independence ministerial council. The date is now commemorated as Martyrs' Day.

The renovation of the building attracted attention from the start, after it was leased to Anawmar Art Group in 2012 by the military-backed government that preceded the election of Suu Kyi's National League for Democracy in 2015. It is unclear from available data who owns the group, which has a 50-year lease on the building, but the Secretariat's historical and cultural importance has complicated the commercialization process. The building has had its share of controversy, including last year when the Singapore-owned De Beau Wellness Center was closed down after a soft opening launch. Despite social media speculation, Emerson says that the government closed the spa because the occupier did not obtain the appropriate business licenses.

“The government has now provided a list of ‘cans and cannots’ [for rentals],” he adds. “The ‘cannots’ mainly focus on uses relating to religion and politics, although a wide variety of retail, office and food and beverage uses are permitted, including the sale of alcohol in fine-dining restaurants.”

Politicians have joined in the chorus. Myint Myint Soe, a National League for Democracy member of parliament, whose constituency encompasses the Secretariat, has objected to the letting of any commercial space in the building, given its historical significance. "I understand that the company needs to make money on its investment, but this site is of great significance to the people of this country and I do not want it to become a private space for privileged people," she told local media in early 2019.

Emerson says that the Secretariat is intended be an inclusive space for all. “The developer was aiming to create a unique cultural destination, providing a historical museum and cultural and arts spaces, supported by a mix of retail and food and beverage facilities, and a prestigious office environment for local and international businesses.”

The “inclusive” mix has also raised some eyebrows, with the opening of coffee and snack outlets Tom N Toms Coffee and Krispy Kreme (doughnuts), as well a branch of American fast-food chain Kentucky Fried Chicken. Top: Tom N Toms Coffee is one of the less controversial tenants in the Secretariat Building. Bottom: KFC is coming to the proud colossus of British colonialism. (Peter Janssen)

"I've met people who think the Secretariat shouldn't be touched at all," adds Emerson. "I disagree with that fundamentally because it's one of the most important heritage buildings on the world stage, and deserves to be preserved and protected. It’s only by repurposing the building for modern-day use that we can guarantee that it has any sustainable future.”

Tour agencies agree, arguing that the opening of the building has secured downtown Yangon's long-term future as a world-class heritage destination. "If you look at the tourist attractions in Yangon, the Shwedagon Temple is No. 1, and downtown Yangon is No. 2, with the Secretariat at the heart of it," said Edwin Briels, managing director of Khiri Travel, a Thailand-based group with offices in Myanmar.

"We encourage clients to visit the Secretariat, and of course stay in one of the downtown colonial hotels like the Excelsior, Rosewood or the Strand," Briels added. 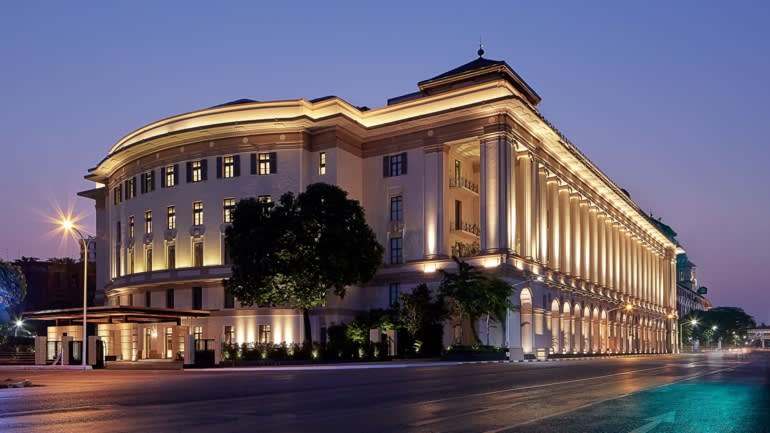 In the short term, growth in international tourism has been dampened by the Myanmar military's campaign against Rohingya Muslim insurgents in Rakhine State, which in 2017 triggered a flight across the border with Bangladesh by more than 700,000 people. More recently, fears over the novel coronavirus have deterred travelers.

Official data from the Ministry of Labor, Immigration and Population suggests that 4.3 million foreigners visited Myanmar in 2019, up 23% from the previous year. However, this includes day-trippers crossing over from neighboring China and Thailand.

According to Yangon International Airport, deemed a more reliable source, the number of international visitors passing through the airport rose by 15% to 1.3 million in 2019. Asian arrivals rose by 20%, including a 73% surge in visitors from China. But there was no growth in tourist arrivals from Western Europe -- a key target group for heritage tourism -- suggesting that a resolution of the Rakhine crisis will be required if Myanmar is to reap the full benefit of its costly heritage renovations.

The government is targeting a total of 5 million arrivals this year, including day-trippers, but Chinese arrivals are likely to fall sharply because of the coronavirus outbreak, which has prompted a tightening of visa requirements.

"Cancellations from China have been extreme, as expected, with onward booking for Chinese tourists coming to a virtual standstill as the visa-on-arrival scheme for Chinese nationals has been suspended," said Ed Brea, managing director of the Rosewood Yangon, which is managed by Hong Kong-based New World Development Group. "It seems that every time things are going in the right direction, something unfortunate happens," said Brea.

Phyoe Wai Yar Zar, managing director of the Myanmar arm of Diethelm Travel, a Thailand-based destination management agency, agreed. "Myanmar is still a hard sell," he said, "but Myanmar is still the last frontier in Southeast Asia, because we hardly get any tourists."