Measuring Middle America, where money and Trump are gods

The election is over, but country as polarized as ever 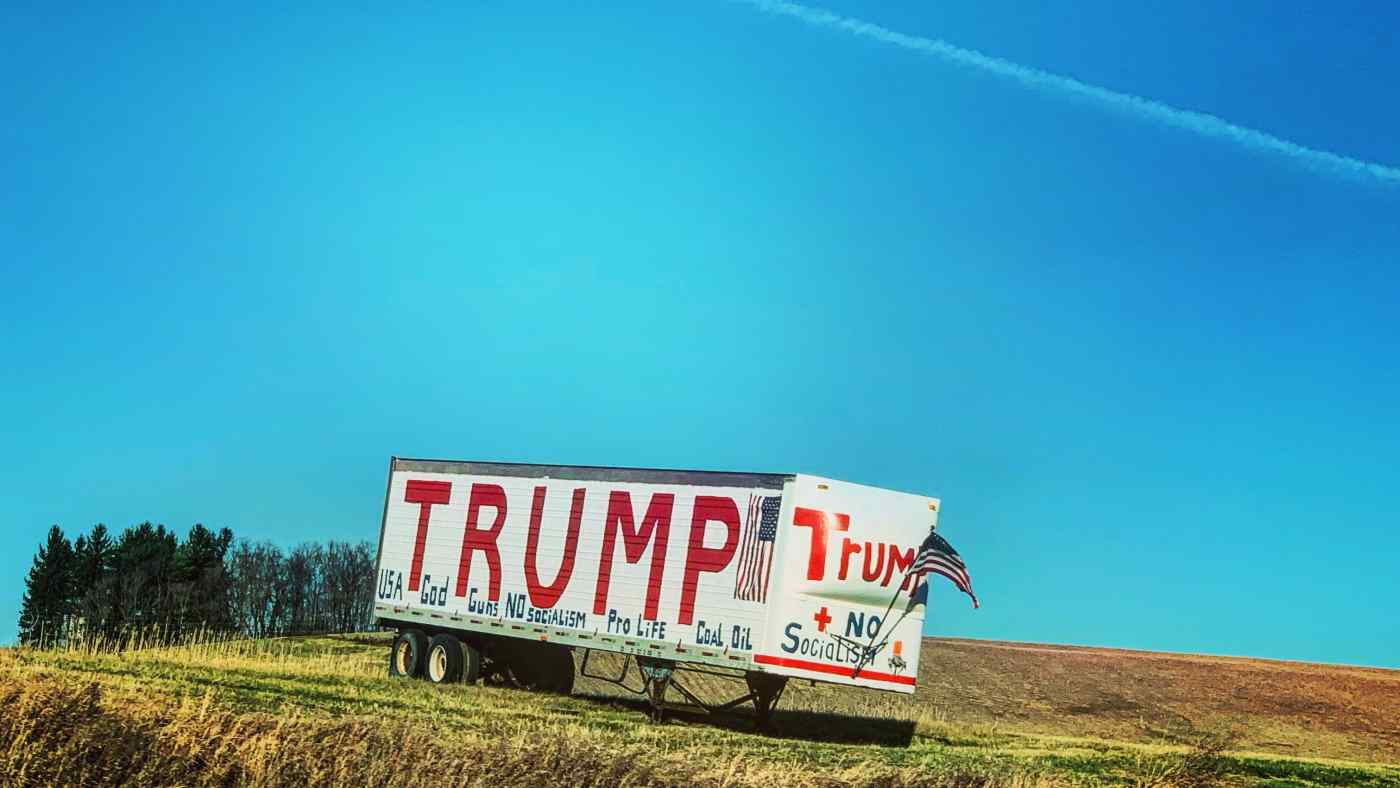 The U.S. election is over, but has left a deep, polarizing rift between left and right. Democrats and Republicans continue to be split along geographical lines too. The West Coast and Northeast states voted Democrat, while states in the Midwest, the Great Plains and the South stayed red. With both sides increasingly suspicious of the other, Wajahat Khan embarked on a post-election journey to the Midwest to explore how South Asian voters are faring in this polarized divide.

MECHANICSBURG, PENNSYLVANIA -- Left New York City at around 10 a.m., bound for Hagerstown, Maryland. As the road and route were mine to take, I spoke to a D.C.-based Indian-American lobbyist about the dynamics that have turned Pennsylvania into a "battleground state." Asking not to be named, she described three "voter pockets" in the Indian-American diaspora.

There are the liberal, "woke, and very East & West Coast" Indians who voted for Biden, strongly by their younger generation. Then there are "fresh off the boat" Indians who are pro-Trump mainly because they're unfamiliar with U.S. racial and cultural dynamics. Usually religious, this group tends to see the Republican Party as more of a "natural stop." The third pocket is pro-business and strongly identifies with Indian Prime Minister Narendra Modi's Hindu nationalist Bharatiya Janata Party. They have a "strongman complex," preferring Trump for the same reasons they like Modi: he's pro-business and he means business.

On the road to western Maryland, I decided to take the lobbyist's advice and head through the Appalachians into Mechanicsburg, Pennsylvania for lunch. Past New Jersey -- also a Democratic stronghold -- by the time I reached Allentown, Pennsylvania, the first Trump signs started to appear, both billboards on the highways and smaller yard signs. In these districts of hamlets and villages, dotted with barns, stables, and farmhouses that flew a lot of American flags, not a typical site in New York City.

Even though I was north of the Mason-Dixon Line, one farmhouse featured a Confederate flag. I saw several pickup trucks -- clearly the vehicle of choice in this region -- with Trump bumper stickers. One had a "Honk for Trump" sign fingered into the mud-baked tailgate. The signs got bigger, even louder, as I carved my way around the Appalachian foothills. In a clear retort to the Black Lives Matter movement, I saw one anti-abortion billboard flatly declaring that "Unborn Lives Matter -- Trump 2020." More than two weeks after election day, it made no difference that Joe Biden had won. This land was still Trump's. 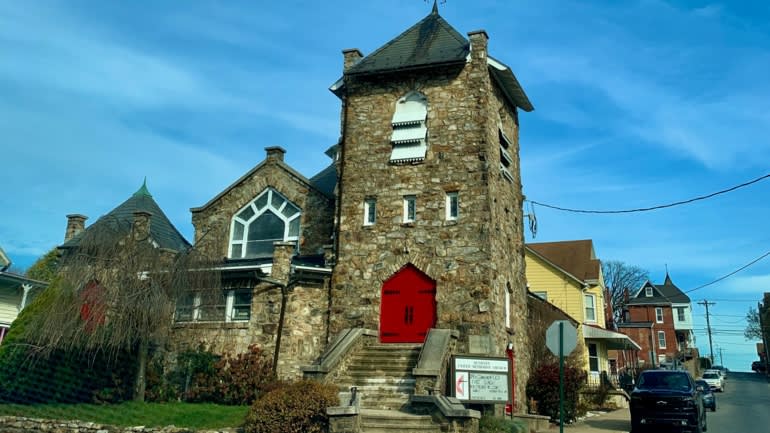 The Bethany United Methodist Church of Hamburg, Pennsylvania. One of many in the conservative, pro-Trump Appalachian region to keep in-house services running during the COVID-19 pandemic. (Photo by Wajahat Khan)

Eventually, I arrived in Mechanicsburg, in Cumberland County. I had been advised to make a pit stop here because of its scurried evolution. Now home to "Little Nepal" and a thriving Indian diaspora, Mechanicsburg was apparently once the unofficial headquarters of the regional chapter of Ku Klux Klan.

Popping up on Route 114, right off the Interstate 76 and technically due north of Washington D.C., Mechanicsburg appears just as one crosses the Susquehanna River and Hershey, home of the ubiquitous chocolate manufacturer. Named for the mechanics who repaired the stagecoaches of settlers heading west, it was also the site of the Skirmish of Sporting Hill, the northernmost engagement of the U.S. Civil War. In the battle that followed it, Confederate troops retreated from Sporting Hill and regrouped at Gettysburg, a 10-hour walk away, which became the turning point of the war and where Abraham Lincoln made his famous speech. That's also the place modern America was united at such tremendous and bloody cost.

The exurbs of Mechanicsburg look unremarkable, with strip malls and parking lots. Statistically, things get more interesting. It's clear that this place doesn't like too many outsiders. Though all members of the 1980s rock band Poison hailed from here, its population was 4000 in 1900, and just over 8000 today. Underscoring its history, there are recent reports in the local papers of "KKK" graffiti appearing on vehicles owned by residents of "Middle Eastern descent."

In my search for how Asian Americans are faring in this polarized time, I found the Tikka Shack, a stand-alone, single-story building just off the highway. It's actually a franchise, I learn, with a yellow and green logo selling Americanized curries palatable to the western Pennsylvania-born Trump supporters whose signs dominated the area. Walking in hungry for some lunch, I met Chiragh Patel, a young cashier.

Slightly built, agile and over 180 centimeters tall, Patel is built like a lanky cricket bowler -- which he admits to being back in Ahmedabad, Gujarat, also famous as Modi's hometown. Somehow managing to handle the register, the grill and serve all at the same time, and dressed in saffron yellow Tikka Shack merch, Patel offered me a complimentary mango lassi, which I couldn't resist, despite my vegan diet.

Packaged just like those organic juices at more sophisticated New York health stores, the lassi was fantastic. Among the other customers -- all white, all men who were in and out, picking up orders -- the lassi was a clear favorite. Some customers couldn't wait to get to back to their Ford F150s and Dodge Rams and -- their lunch bags filled with samosas and tandoori wraps -- started swigging before they drove off. One rear windscreen was completely stickered with the American Eagle -- how did he check his rearview, I wondered. Patriotism, it seemed, was more important than driving safety. Pennsylvania, the fifth-largest state by population, has recorded over 11,000 coronavirus deaths, and more than 440,000 COVID-19 cases. Biden won the state narrowly, with rural areas such as Mechanicsburg voting conservative, and urban areas leaning Democratic. (Photo by Wajahat Khan)

As I settled down for lunch, Patel told me that he didn't vote because he's not yet a citizen, and even though he has a green card, he claimed not to have a horse in this race. Pointing across the highway to the glass and steel Deloitte office, he explained that most of the accountants inside are South Indian, and most of them are natural Trump supporters. Why? Business policies, he explained, broadly. They love that Trump thinks like an accountant.

What about his younger Indian friends, at the Mechanicsburg Community College, where he studied business? All Trump supporters? Yes, he responded. "Because of the $1,200 he gave us all when COVID started," Patel said, flatly, as he served cardamom tea into a take-away cup. "For us, in Hinduism, money is God. And Trump gives money."

And what about the racism, I ask. I don't make myself clear, on purpose, about whether I'm talking about the local version, or that espoused by some of those still in power in Washington. "Well, what about it?" he snapped back, as he picked my dishes and swept the table clean. "This is America, no?"

Patel seemed unaffected, detached, even mechanical. I was not surprised, for he was a new immigrant, braving through KKK-ridden Mechanicsburg, Pennsylvania. Home both to Little Nepal -- a collection of popular cafes and restaurants run by the Nepalese diaspora -- as well the northernmost battle of the Civil War, which united this great country but left it divided.

I settled my bill, accepted a complimentary tea after my typically feigned but still formal South Asian refusal, and drove on. In my rearview, the Tikka Shack's neon lights came on -- a proud beacon of immigrant choice and entrepreneurial freedom in a place that has varying interpretations of what liberty really means.