BANGKOK -- Anyone who thinks Thailand's menus are limited to pad Thai, the famous fried noodle dish, or to tom yum goong, the piquant prawn and lemongrass soup -- two of a dozen basic dishes fostered by a former government keen to standardize the cuisine as a tourist lure -- may be missing a brilliant redefinition of "modern" Thai cuisine.

This new culinary movement, spearheaded by both foreign and home-grown chefs, is especially noteworthy because it is going beyond the appetite for novelty among Bangkok's free-spending urban professionals. The city and country are fast becoming Asia's leading staging ground for earth-saving principles sweeping the culinary world -- espousing the embrace of a "kilometer zero" terroir to create a more deeply rooted food identity while helping to reduce climate-changing "carbon footprints." Chef Dylan Jones at work in the kitchen of Bo.lan (Courtesy of Bo.lan)

"The world food system, depending on destructive chemicals, is broken," said Dylan "Lan" Jones, co-founder of Bo.lan, a Bangkok restaurant that sticks to time-honored recipes but is leading the way in sustainability. "In wanting to work with farmers to improve growing methods, in recycling cooking oils into soap or using bamboo straws in place of Styrofoam, I'm just safeguarding the future of my profession." Jones is far from alone in beating this new path. When chef Weerawat "Noom" Triyasenawat returned to the northeastern Thai region of Isaan after a decade in California's "farm-to-table" restaurants sector, he quickly forged ties with organic farmers and began foraging for jungle plants to supply his restaurant Samuay & Sons, setting off a pilgrimage by dedicated foodies to a backstreet of Udon Thani, the region's biggest town.

And when brash 29-year-old Texan Riley Sanders wanted to establish himself as a force in Bangkok's fine dining scene, he vowed to base his Canvas restaurant "99%" on herbs and produce found in local markets. Three years as a globetrotting cook on a yacht had taught him to scavenge markets where "what's best are items I've never seen before."

Arnie Marcella, who learned his culinary craft in New York's dining scene, came to hone his "contemporary American cuisine" at the trendy nightspot Bunker, in Bangkok's Sathorn district, and found inspiration in a burgeoning scene of specialty suppliers that helped him create a menu based on Thailand's edible flowers and little-known forest nuts. At the same time, upcoming star Garima Arora has based her restaurant Gaa, in Langsuan, Bangkok, not so much on her Indian roots as on the unusual fruit and fish that Thailand offers. 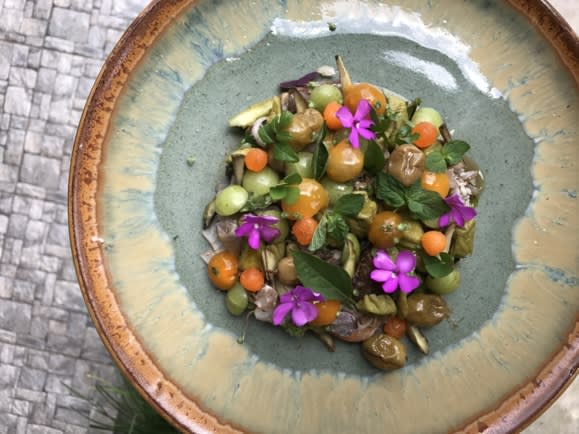 "Going local," said Marcella, "is good for business, catering to younger, more ethical diners. It's good for building community and the economy. It's good for the environment. But above all, it's good for the flavor of our dishes." Weerawat, a graduate of Jones's kitchen, added: "This is our way to honor native wisdoms and preserve biodiversity at the same time."

For most diners, however, what matters is safeguarding the diversity of dishes, savoring fresh ingredients and experiencing culinary innovation through menus that go far beyond recycling old protein combinations.

That could mean Gaa's ice-cream, made of rarely found "egg fruit," or frozen chicken liver mounted on longan; Bunker's local pompano in a cream of tropical "almonds," or a puffed green-colored rice dotted with decidedly local frog and snail meat; or perhaps Canvas's ceviche of raw cobia fish from Phuket, or grilled squid topped with a bed of feathery cha-om herb. "Everyone is tired of using the same imports day-in and day-out," said Marcella. "I was attracted to move to Thailand in part because of the many products and long growing season. By now, my palate has been expanded. And for customers, too, there's less demand for luxury items from Europe; a growing pride in what they have here."

This change of emphasis may have started with Thai chefs such as Thitid "Ton" Tassanakajohn, who returned from training in some of New York's top kitchens vowing to bring the same level of quality preparation and presentation to his homeland. 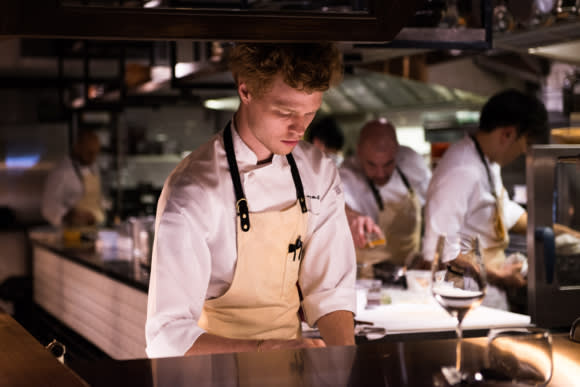 Chef Riley Sanders at work in Canvas (Courtesy of Canvas)

"Three years ago, when we started Le Du" -- the name looks French but means "season" in Thai -- "everyone said we were crazy, that no one would pay so much for local ingredients and we should just serve Norwegian salmon," he said of his Bangkok restaurant.

Now Le Du has a steady clientele and a top ranking for exquisite minimalist servings of line-caught barracuda with santol, crayfish with fresh-water seaweed and jicama. "I wanted to make Thai ingredients really cool," he said, "Now people are quite willing to spend for unusual local produce, or eggs with no hormones."

Another trendy Bangkok eatery, founded by a young chef trained in the short-order dives of Canada, is named "80/20" after his local-to-foreign formula. At the same time, the city is drawing more specialized regional restaurants, like the eye-opening Sri Trat (a first for Bangkok, featuring the dishes of this seaside province). 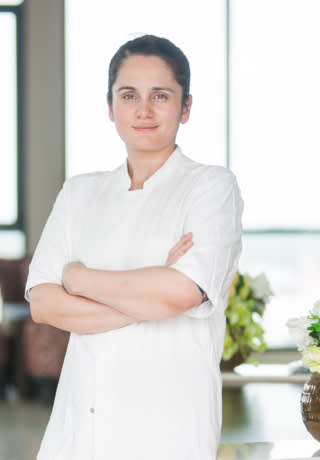 Chef Garima Arora, whose Gaa follows her work at Gaggan and Noma (Courtesy of Gaa)

"You need purists, but you also need people who break the rules," said chef and author David Thompson, who has created a rooftop garden for his famed Nahm Restaurant, in Bangkok. "Westerners have always had a very limited view of the complexity of Thai cuisine. So it's great there are so many creative people drawn to Bangkok now."

Emblematic of this is Sanders, probably the most adventurous graduate of Austin's Texas Culinary Academy, who purposely set sail for Thailand to work with ingredients like pepper and tamarind leaf, pork floss, tangerine juice, pineapple oil and bitter Thai "olives," feeling like "a kid in a candy store."

Defending himself against charges that his experimental dishes may go too far, Weerawat argued that "Thailand has always had a melting pot cuisine -- with fermentation from the Khmer, curries from India. What we're trying to do now is simply apply modern techniques to ancient products." His return to Udon Thani was originally motivated by aging family members, but he soon found himself wanting to "support local agriculture" and help strengthen a network of logistics that he admits is still developing. "To get the best fish sauce, delivery can take time. You have to build dialogues with people, especially teach fishermen to practice more responsible methods and careful ways of shipping their catch."

But, he says, "A lot of young people are returning to farming in Isaan, and the older ones are seeing the benefits of going organic -- where you can charge 50 baht ($1.51) for a bunch of holy basil instead of 10."

In future, many may follow the example of Jones, who has planted 250 trees on newly purchased fields in Isaan to supply Bo.lan. "We've got our own bee sanctuary, and eventually hope to get off the energy grid entirely. Of course, one restaurant can't change the world, but we have to set examples for young people to continue the trend," he said.

To Garima, a former journalist who signed up to study at Le Cordon Bleu in Paris, "this generation of independent chefs wants to be impactful" -- and not just through unique dishes such as betel leaf fried in duck stock served on a mock shrub.

Above all, she says, "You've got to be very conscious when you try to twist ancient cooking traditions. But sometimes, by staying close to home in Thailand, a fresh set of eyes can bring new perspectives."