Mongolia's cashmere trade tries to break into the 21st century

Government fails to squeeze brokers out of traditional industry BAYANTSAGAAN, Mongolia -- In this remote town in the Gobi steppe, a bustling market has sprung up, with sellers offering everything from refrigerators to yurts, the portable homes used by Mongolian nomads. In spring, however, the market hosts a much more lucrative trade -- in raw cashmere, the fine, soft fleece of some kinds of goat.

Up to 40% of the world's cashmere is sourced from Mongolian goats, and this is an important market for brokers such as Arvinzaya Khenz, who buy the sought-after wool from herders. For Arvinzaya, 42, spring means driving around Bayantsagaan in her beige blazer and white Toyota Land Cruiser, prowling for business.

On a recent spring day, though, she found little to buy, largely because the local governor had set a rate of 116,000 tugrik ($43) per kilogram for purchases of raw cashmere -- higher than prices in other cashmere trading centers such as Ulaanbaatar. "We're just waiting on each other; no one dares to buy at the moment," she said.

Standing in her warehouse, Arvinzaya waited for other buyers -- brokers and cashmere clothing factories -- to start purchasing cashmere bundles to set the price on track. Herders who asked her price were told it was "still not clear," but promised a fair deal. "You can leave it here," she assured them. "You will have your money when the price is set."

After a two-day standoff, some cashmere finally cleared at 115,000 tugrik. But a day later prices had fallen to 113,000 tugrik, 3,000 tugrik below the governor's guide price. The saga was a triumph for the brokers, who control 80% of the market despite government attempts to squeeze them out in favor of a centralized trading system intended to bring herders into direct contact with manufacturers. 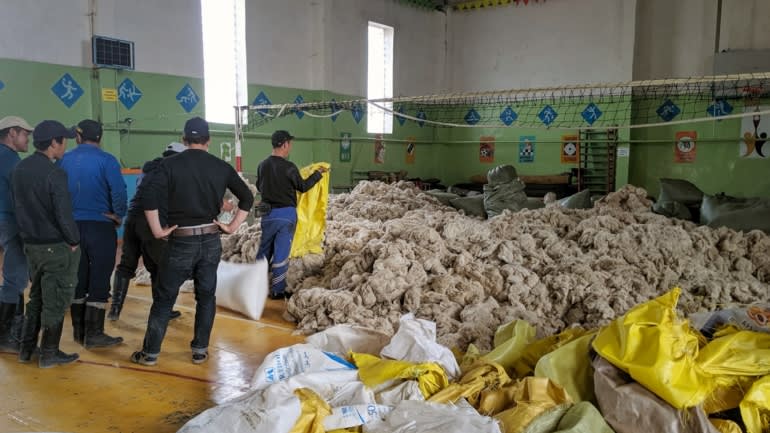 Herders empty their annual harvest onto the floor of a local school gymnasium for inspection and repacking into larger bags for transport to Ulaanbaatar, where it will be washed. (Photo by Sarah Trent)

The government says that cutting out the brokers would help the herders by raising prices for their cashmere. But the traditional model is proving hard to break, in part because many herders and brokers are related, while others have trading histories going back decades. Arvinzaya said she earns up to 7 million tugrik trading at Bayantsagaan, and claimed that thousands of brokers make more than her. 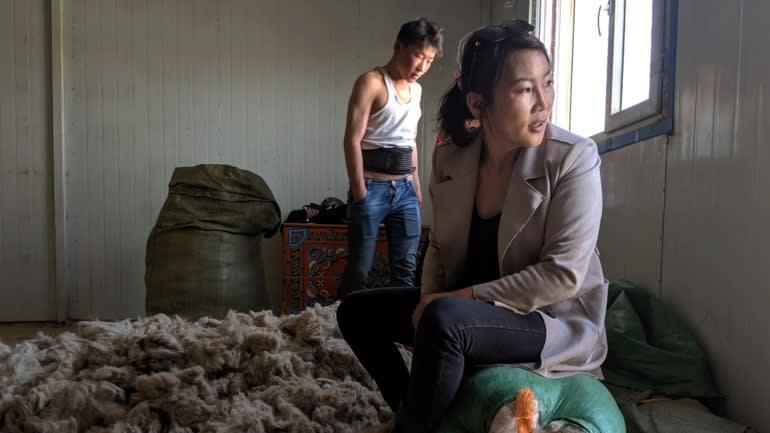 Arvinzaya waits for herders to bring bags of cashmere to the small room she's rented in Bayantsaagan to receive this year's harvest. (Photo by Sarah Trent)

Brokers also build up good relationships with herders by providing cash advances, particularly during Mongolia's harsh winters, when herders are unable to generate income except by selling animals for meat. Herders repay the brokers in cashmere in the spring. For the herders, these informal loans are crucial, particularly over the Lunar New Year, which this year fell in early February.

Baasanbat Tsedev, a 58-year-old herder, had just earned 2.5 million tugrik from selling cashmere to Arvinzaya. "I'm paying back debt to the supermarket," he said. "I borrowed money for all of my food and gifts for Lunar New Year." Baasanbat, who has also borrowed from a bank, said he will borrow from brokers again when he next runs out of money. Batnasan Naidan, a broker, waits for herders to bring their cashmere to his warehouse. (Photo by Sarah Trent)

Mongolia started exporting raw cashmere to the U.S. and the U.K. in 1940, but began local processing only in 1980, when the Japanese government established the Gobi Cashmere Factory in Ulaanbaatar as part of its World War II reparations. Until then goats were reared mainly for dairy products.

Now, half of the population is involved in production of goat byproducts, including textiles. As Yondonsambuu Gombosuren, vice-president of the Mongolian Textile Association, put it: "Cashmere has been saving herders from going into poverty. Goats are gifts from God."

Mongolia's economy has grown rapidly since 1991, when the country ceased to be a satellite of the Soviet Union, with gross domestic product rising from $2.37 billion to $13.01 billion in 2018, according to the World Bank. Most of the growth has come from rising exports of coal and other minerals. Herders line up to sell their raw cashmere to Arvinzaya. They come to Bayantsaagan from all over the region to sell their harvest, which makes up the majority of their income for the year. (Photo by Sarah Trent)

However, cashmere is the country's third-largest export industry after copper and gold, according to the 2019 Annual Cashmere Market Report by The Schneider Group, an Italian-based global wool trader, with 27 million goats producing 9,400 tons of wool in 2018. The industry provides work for more than 100,000 people, but most of this is first-stage processing, in which the wool is cleaned for use in final product manufacturing in foreign factories, mostly in China. Only about 10% of raw cashmere is finished locally.

The government wants to increase that to 40% through a four-year development program launched in February 2018, which focuses on providing technological and financial support for domestic cashmere producers. The state-owned Development Bank of Mongolia says it provided 200 billion tugrik in low-cost loans in 2018 and had lent 83 billion tugrik up to July this year.

However, the availability of low-cost loans has been restricted because of auditing issues in the bank, angering cashmere producers. "Our companies are dying to get investment loans to increase factory capacity and productivity," said Altantsetseg Duger, executive director at the Mongolian Cashmere and Wool Association. 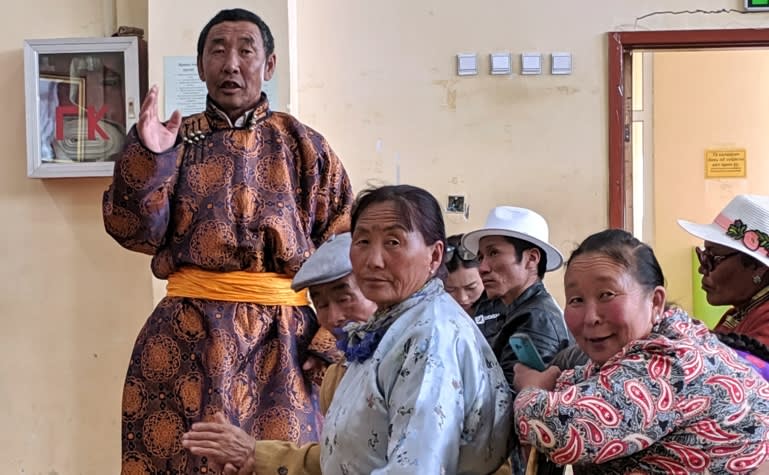 A herder pleads for a higher price for his cashmere after hearing the buying price set by the local governor at the start of the auction. (Photo by Sarah Trent)

The Mongolian Commodity Exchange has also developed a system that allows herders to sell their raw cashmere production online, but the concept has been slow to take off because of the herding community's nomadic way of life.

Dashzeveg Polooj, a member of the Bayantsagaan provincial council, backs the government's efforts to change the industry, arguing that centralized trading should continue, even though the system has been less successful this year than in 2018, when he helped to raise prices in a local auction by buying cashmere above the initial market level on the first day of trading.

"[Herders] can't go forever by selling from homes and selling only when the brokers come to collect the cashmere," said Dashzeveg. "We need to unite and improve our strategy." Many herders, though, appear happy with the existing system. Another local auction at Shine-Jinst, south of Bayantsagaan, was scrapped in 2017 after frustrated herders beat up a local governor as anger about persistent low prices spilled over into violence.

Batnasan Ganbold, a 28-year-old herder, said he had made 60 million tugrik by selling to brokers in Bayantsagaan this spring, allowing him to give his teenage brother enough money to buy a brand-new Huawei mobile phone. With plans to buy an apartment in Ulaanbaatar, Batnasan is already looking forward to next season.