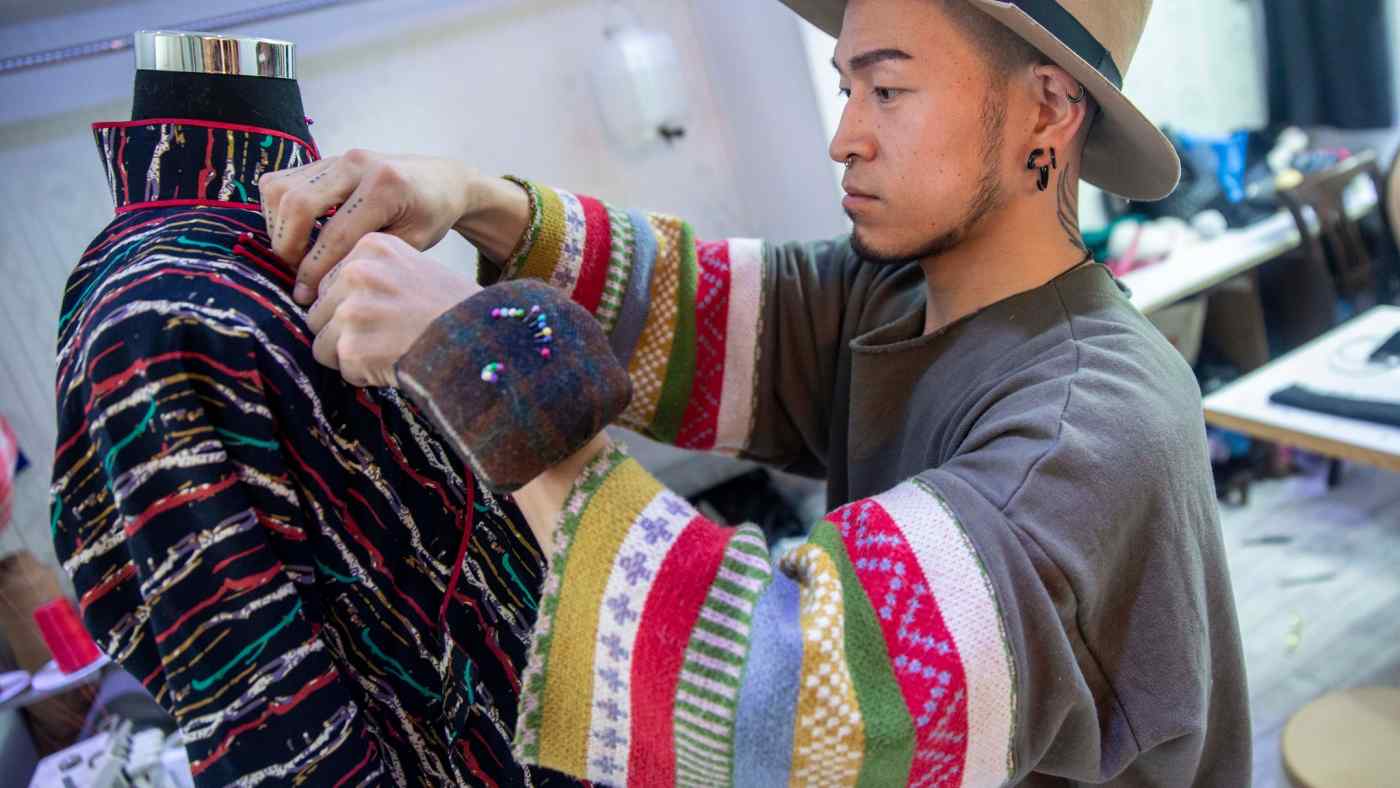 ULAANBAATAR -- Mongolia's national costume, once largely discarded as a relic of the country's rustic past, is making a comeback among fashion lovers who see it as a symbol of national pride, prosperity and urban chic.

The Mongolian deel (pronounced "dale") is a long tunic made from thick cotton material with narrow sleeves, a wide belt and a high stiff collar. Its design reflects the nomadic way of life on the harsh Mongolian steppes, where the need to keep warm has to be balanced against the practicality required for riding horses, herding animals and milking cows.

Traditionally, the garment was made with a deep belted pocket on the left to hold newborn goats and sheep in spring. In recent years, however, the deel has evolved into a fashion item as Mongolian designers have reworked it in a style known as nomadic chic.

"Wearing the deel makes me look way more voguish compared to wearing regular Western clothes," said 22-year-old Uuriintuya Khurelbaatar, who recently graduated with an engineering degree in Beijing and made herself a winter deel with a hood using shell fabric and synthetic cotton.

"I love to wear the [modernized] form of the traditional deel," said Uuriintuya. "I'm not into Westernized clothes; that loses the meaning of the Mongolian image."

Mongolians largely ditched the deel after the country adopted democracy in 1990 -- abandoning decades of communist rule as a satellite of the former Soviet Union -- and opened its doors to outsiders, embracing the latest technology, Western culture and fashion. Three decades on, however, young people are seeking to rediscover and preserve their national identity.

Modernized versions of the deel retain the distinctive standing collar but incorporate elements of Western forms. (Photo by Anand Tumurtogoo)

Modernized versions of the deel usually retain the distinctive standing collar of the traditional garment, but incorporate elements of Western forms such as skirts, dresses or jumpsuits. Traditional motifs such as shoulder and waist buttons are kept for aesthetic purposes, but practical improvements such as zips are added for urban practicality. Designers often decorate outfits with Mongolian ornamental patterns.

Deels intended for summer use are usually produced in linen, silk or other soft materials, while winter deels are padded with cotton material or lambskin. Some expensive deels are made from the skins of baby lambs -- usually animals that have been culled by herders because of weakness. In the coldest weather, Mongolians accessorize the deel with fur cloaks, capes and hats.

The redesign has been so successful that young urban Mongolians have largely ditched South Korean fashion, formerly a firm favorite, for the deel. In a reversal of fashion stereotypes, rural herders are now more likely to wear jeans and hoodies than deel-wearing city dwellers.

Some Mongolians complain that designers have made the modernized deel look too much like traditional dress in other Asian countries, such as the Vietnamese ao dai or the Chinese qipao, largely by fiddling with the high collar. But Enkhbaatar Bat-Ulzii, who makes deels under the brand KADR, is sanguine about the similarities in Asian attire, saying that many foreign styles originated in Mongolia.

"Mongolian deel elements spread and [it] was introduced all over Asia through the Mongol empire. Mongolian emperors wore red deels with dragon images in the 13th century through [China's] Yuan dynasty," Enkhbaatar said. "Mongolians wear the standing collar because it blocks the wind."

Enkhbaatar is a trendsetter in other ways, having launched his first collection with a transgender model -- a provocative move in patriarchal Mongolia. However, the decision has not hampered his career.

"Actually, the controversy helped me to become known," said Enkhbaatar, who represented the Mongolian fashion industry at International Fashion Week in Kazakhstan in 2018 with a collection of deels in black, silver, gray and green, combined with gothic jackets and cloaks.

The deel-wearing trend has also spread to the neighboring Chinese province of Inner Mongolia, prompting many Chinese Mongolians to visit Ulaanbaatar in search of Mongolian-influenced designs. A seamstress at Mon Couture is working on standing collar. (Photo by Anand Tumurtogoo)

"Maybe Mongolians are fed up with western clothes," said Batzaya Khaimchig, owner of Ulaanbaatar's Mon Couture boutique. "In my observation, they want to be known as a Mongolian person. I think that's why they want to wear national costumes."

Other designers are also targeting exports to Inner Mongolia, as well as other countries. Urban Jeans, Mongolia's first mass producer of jeans, exported its first batch of garments based on the deel to China in January, and has signed sales agreements with three distributors in Hohhot, the capital of Inner Mongolia. 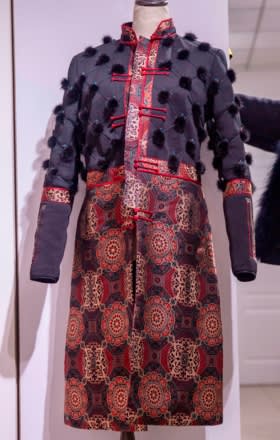 The company is also targeting sales in Southeast Asia, while Khadlan, another Mongolian manufacturer, is exporting winter deels to neighboring Russian provinces.

Tungalag Damba, who founded Urban Jeans with savings accumulated during a 10-year stint in the U.K., said there is a thriving market for ethnic designs in Mongolia, where the company released its first designs just before the 2016 Mongolian summer festival of Naadam.

"Surprisingly, the sales went incredibly well. The sales and our company grew thanks to social media also," said Tungalag. Since then, the company has released new collections twice a year, before Naadam and before Lunar New Year, when demand peaks.

Tungalag said the company's ability to keep costs down is also helping demand. "We make the national costumes cheaper than regular tailors," she said. People usually find it hard to find cheap ready-to-wear ethnic costumes to wear with jeans or regular skirts."