A dabbawala, or lunchbox deliveryman, balances his cargo in Mumbai in pre-pandemic times. These traditional deliverymen have been distributing lunchboxes to thousands of people across the city every day since 1890, but COVID-19 has dealt a huge blow to business, forcing many to seek work elsewhere.   © Getty Images
NEETA LAL, Contributing writerOctober 8, 2021 08:00 JST | India
CopyCopied

NEW DELHI -- His bicycle laden with shiny steel dabbas (tiffin boxes), Neelu Sawant weaves his way through Mumbai's traffic maze to deliver lunch to offices around India's financial capital. Dressed in a crisp white kurta-pajama and a traditional Gandhi cap, the 45-year-old's day begins at dawn with the collection of freshly cooked food from a range of home kitchens -- his routine for 23 years, six days a week.

Sawant is part of an army of 5,000 dabbawalas (lunchbox deliverymen) who have been distributing lunchboxes to almost 200,000 city office workers since 1890, earning around $200 a month. Working like a human chain, the men assemble with the food they have collected at a designated railway station and then cycle or walk to surrounding offices for delivery. A complex system of alphanumeric codes helps the largely semiliterate or illiterate workforce to collect, sort and distribute the food boxes.

The service began in 1890 when a Mumbai businessman -- Mahadeo Havaji Bachche -- launched a lunch delivery service with about 100 men and later organized them under a charitable trust called Nutan Mumbai Tiffin Box Suppliers Charity Trust. Dabbawalas are now an intrinsic part of the city's cultural fabric.

A 2010 study by the Harvard Business School graded it "Six Sigma," meaning that the dabbawalas made fewer than 3.4 mistakes per million transactions. With 200,000 deliveries six days a week, that translates to fewer than 212 delayed or missing dabbas in a year.

The dabbawalas' reputation for diligence, integrity and honesty has also impressed expert logistics organizations such as Amazon and FedEx. Some prestigious visitors, such as Virgin Atlantic Chairman Richard Branson and Prince Charles, the heir to the British throne, have asked for personal meetings with deliverymen. Prince Charles even invited two dabbawalas to his wedding with Camilla Parker Bowles in England in 2005. However, the COVID-19 pandemic has dealt a cruel blow to the men in white. Thousands of dabbawalas retreated to their original homes in rural locations as the virus raged across Mumbai, a city of over 20 million people, crippling the century-old food supply chain. Broke and unemployed, many turned to subsistence farming on small plots of land or worked as daily wage earners for landowners.

Their lives were thrown into further disarray when Cyclone Tauktae made landfall near Mumbai this summer, ravaging their homes and fields -- less than a year after similar devastation wrought by Cyclone Nargis in 2020.

Those dabbawalas who did not have village homes to retreat to stayed in the city scrounging for odd jobs. Many are still hunting for employment, a fraught task given the fact that India is still reeling from its worst health crisis since independence from British rule in 1947. Some are eking out a living as gardeners, security guards, cooks or deliverymen for restaurants, receiving a fraction of their previous earnings. 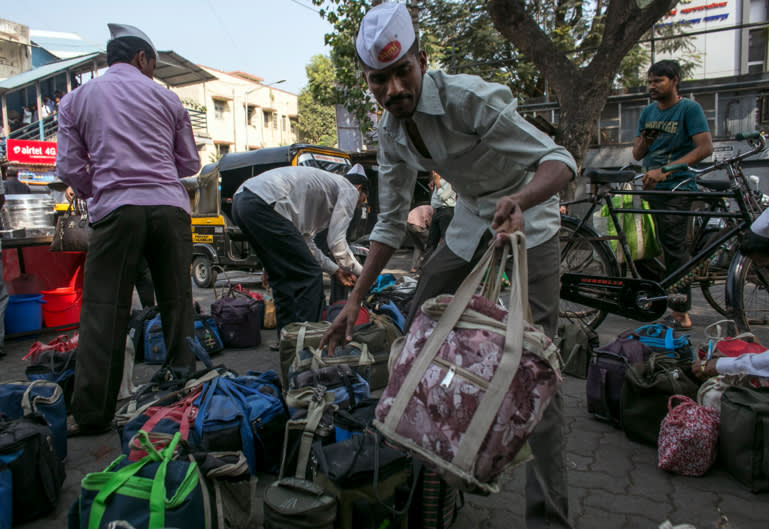 Dabbawalas organize bags for delivery in Mumbai in February 2016. A 2010 study by the Harvard Business School found that dabbawalas made fewer than 3.4 mistakes per million transactions, an accuracy rate that has impressed logistics giants such as Amazon and FedEx.   © Getty Images

"I'm looking for work, but local factories are not hiring," says Ajit Kakodkar, 36, who returned to his village near Pune in 2020 but is now back in the city hoping that tiffin deliveries will soon resume. "From 30 tiffin orders I used to supply daily pre-pandemic, I'm now down to five or six," says Kakodkar. "To supplement my income, I've had to ... take up a gardener's job as I have aging parents, a wife and two young kids to support."

Ramdas Karvande, president of the Mumbai Tiffin Box Suppliers, one of the dabbawala delivery organizations, says the service had operated continuously from its late 19th-century launch to the arrival of the pandemic. "But since March 2020 it has come to a grinding halt. We've worked through floods and other natural calamities, but never seen a crisis like this. Our men are making very little money."

Only about 1,400 of 4,000 dabbawalas who fled to their villages have returned, says Ulhas Muke of Nutan Mumbai Tiffin Box Suppliers Charity Trust. "COVID-19 has dealt a cruel blow to our century-old vocation," he says. "Some of us are surviving on state rations and local charities while living in homes that have no electricity or mobile connectivity. The government has still not given us permission to travel on local trains, which makes it tough for us to reach our destinations." 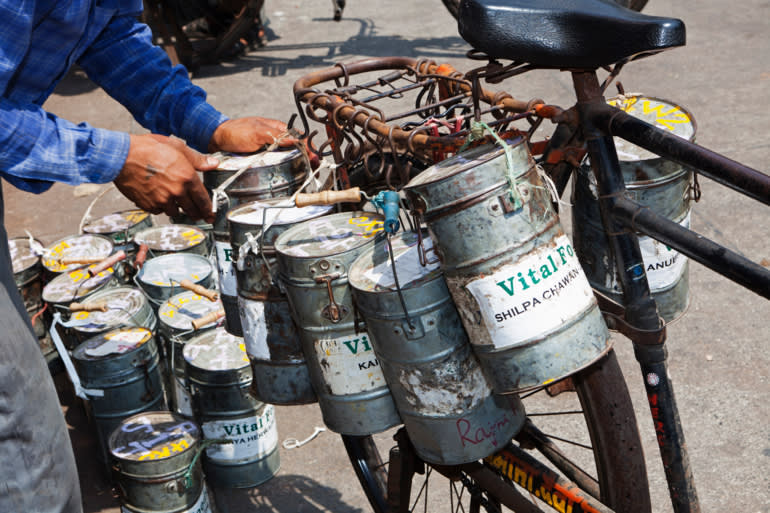 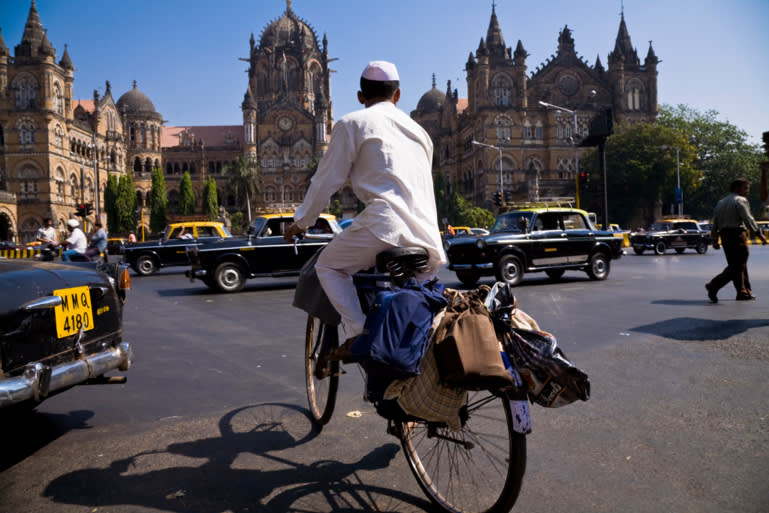 Top: Loading up for a delivery. Middle and Bottom: Heading off to meet customers.    © Getty Images

However, the world of lunchbox carriers is resilient, reflecting the grit and spirit of Mumbai, a tough city that draws millions from across India seeking new ways to earn a living. Many have had to overcome challenges such as floods, typhoons and railway strikes, and all have had to upgrade their skills in recent years, learning English and embracing technology.

In October 2020, with the launch of digitaldabbawala.com, an official website representing all the delivery organizations, the deliverymen expanded their services from lunchboxes to last-mile delivery of digital services such as electronic registration of property rental agreements and marriages. Customers can directly place lunch orders via the website, choosing between monthly or annual subscriptions paid by online money transfer.

The dabbawalas are also partnering with 14 local restaurants to deliver food to customers. "We're encouraging customers to order directly from the restaurants and get up to a 25% discount plus free home delivery," said a staffer at Mumbai's Saki Naka restaurant. "This generates employment for these men. We're also training them to rustle up a seven-day rotating menu of homestyle lunches in our cloud kitchen for busy millennials." Top: Through digitaldabbawala.com, an official website representing all the delivery organizations, deliverymen have expanded their services from lunchboxes to digital services such as electronic registration of property rental agreements and marriages. (Screenshot from Digital Dabbawala's website) Middle and Bottom: Trains play an important role in the delivery network. (Getty Images)

In August, the dabbawalas launched their own digital operation called Central Kitchen which will allow customers to place orders for a wider range of food for delivery. "We will also involve our [wives, sisters and mothers] in the enterprise as they cook food at home so it comes more easily to them. Plus it'll bring in additional money into the family kitty," Muke says proudly.

The idea behind these new initiatives is to think outside the box -- literally -- by expanding the dabbawalas' range from tiffin boxes to a broader range of services that will help to protect their business and incomes when the pandemic is over. The men in white will still be delivering lunch, though, safeguarding the future of one of the world's oldest and most respected food delivery systems.