Myanmar's 'Valley of the Rubies' emerges from shadows MOGOK, Myanmar -- When the world hears about Mogok, it usually concerns some hefty ruby unearthed in the region and auctioned for millions of dollars -- the kind of discovery that has dominated news about the remote gem-mining town for decades. But with gnawing anxieties over dwindling gem deposits, locals are turning to a promising new source of revenue.

Tourism presents the best opportunity for many in the "Valley of the Rubies," as the town is known. Visitors can explore its bustling gem markets, pagoda-clad hilltops, surrounding ethnic villages and some open mines, as well as sample the regionally praised Shan and Chinese fare.

But there is an irksome legal hurdle to local officials' dreams of launching Mogok as a new, untapped destination in Myanmar. Surrounded by mountains and some 200km northeast of Mandalay, Mogok was off-limits to foreign visitors for most of the five decades up to 2013, when the military-backed government eased restrictions but decreed that visitors must have permits.

Amid an unprecedented celebration of its culture and history on March 29-31, there were calls to shed that policy and truly open the enigmatic gemstone hub to the world.

Mandalay Region Chief Minister Zaw Myint Maung promised the crowd at the opening ceremony he would push "the office above" to drop the visitor restrictions, according to local reports.

Phyu Phyu Myint, director of the Mogok Htar Pwe Gems Traders and Brokers Association, says Mogok has everything it needs to attract tourists. "We don't really need specific improvements since Mogok is beautiful, with temples, pagodas, religions and gems," she said. If the government eased visitor restrictions, it would be good "not only for us, but also for the country to get more income from tourism," she added. 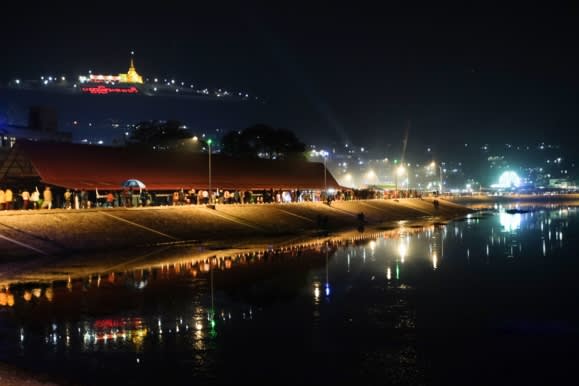 Over a year ago the anniversary organizers began trawling through the area's history in search of a hook for the festivities. They settled on the 800th anniversary, based on the story of three Shan hunters who were ordered by their king to establish a settlement in the valley after discovering a ruby there. One of the organizers, Khin Khin Kyaw, the founder of advertising company Sail, said Mogok has strong historic and religious attractions. It offered "beautiful land" for hiking, and fledgling high-end accommodation, including the King Bridge Resort and the Golden Butterfly Hotel.

"Business is not good for local people presently, so with this event we want to promote the local land for global destination tourism, like Inle [Lake] and [the ancient city of] Bagan," she said.

"There are not many gems left, everything is mined maybe," she added, stressing the importance of creating a new industry because "kids here are drunk, they have nothing to do." 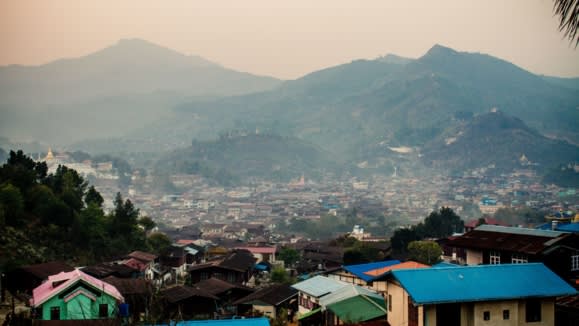 While Mogok has produced some of the world's finest rubies, deposits are running low. (Photo by Leo Jackson)

"We have to think about their future, how they survive and flourish. The only thing right now we can think of is local and foreign tourism and for that we want the government to give foreigners access."

Authorities cite safety and security reasons for visitor restrictions, as armed ethnic groups and bandits operate near the border with Shan State. If granted, a permit takes between two and three weeks to receive, and must be shown at two army checkpoints on the route from Mandalay and at the city's tourism police office.

Locals say, however, the guards are in place to prevent foreigners buying gems directly and thereby avoiding tax. For centuries the quality gemstones lodged in the white marbles of the Mogok Stone Tract -- particularly the pigeon-blood ruby and the blue sapphire -- have lured outsiders to the temperate valley in the hope of securing a discount price.

Other stones, such as spinel, painite, peridot, topaz and zircon, are also found in the hills and regularly turn up in Mogok's morning and afternoon markets. 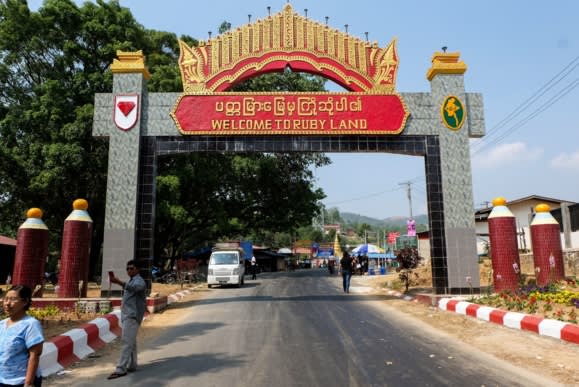 Visitors on the long route from Mandalay to Mogok pass two army checkpoints before making the town. The shorter route through Pyin Oo Lwin is thought more unsafe because of reported bandits. (Photo by Lorcan Lovett)

Control of Mogok and its gems has been coveted by warlords and leaders throughout history. The Toungoo Empire took it from a Shan king in the 16th century, and the British established Burma Ruby Mines Ltd. in 1889, three years after their empire officially colonized Burma.

A reminder of the British occupation is in Ywar Thar Yar town, 15km from Mogok. Also known as Bernardmyo or Bernard Town after the Chief Commissioner of Upper Burma Edward Bernard, the former army garrison still has a cemetery of British soldiers buried in the 1880s and 1890s.

In 1969 the ruling Burma Socialist Programme Party nationalized the mines, pushing locals into small-scale trading of cheap stones, according to Khin Khin Kyaw. As well as dwindling deposits, those in the local mine industry now face delays in receiving mining concession permits, and a boycott of Myanmar gems by several luxury brands, such as Cartier, in protest at the violence against the Rohingya people in Rakhine State.

Over the past decade human rights groups have also reported poor working conditions, child labor and forced labor in Mogok's mines, some of which are military-owned. The focus has been mainly on the jade mines north of Mogok in Kachin State's Hpakant, where the scale of deaths in poorly regulated mines, drug addiction among workers, and military exploitation of local resources is much larger.

None of these problems, though, registered on the faces of locals during the 800th anniversary festivities. Ethnic Lisu, Pa-laung and Shan came in traditional dress from surrounding villages to watch singers, comedians and traditional dancers performing on a stage next to Mogok Lake, an abandoned mining pit of Burma Ruby Mines that was flooded in 1929.

Monasteries opened their doors to help Mogok's hotels cope with the visitors, while noodle shop owners stayed open until midnight, offering customers steamed buns made especially for the occasion. A couple rest by a display erected for Mogok's 800th anniversary celebrations. (Photo by Leo Jackson)

Around mid-morning on the three days of the celebration, some 3,000 monks circled Mogok Lake, collecting donations. On the banks of the brown river hustlers sold python skins and so-called sacred figurines. Teashops overflowed, cars continuously honked, and local Sikhs handed free bags of noodles to the Nepalese Ghurkhas, Burmese, Chinese, Indian and other residents of the city.

In the evenings people picked at candyfloss and sweet sticky rice next to a newly unveiled statue of independence hero General Aung San and gawped at fireworks illuminating the contours of mountains.

But for many miners the celebrations were spent sifting through gravel, searching for a life-changing gemstone. In 2015 a Mogok gem dubbed the Sunrise Ruby and weighing 25.59 carats became the most expensive ever ruby ever sold when it went for $30 million at a Swiss auction. 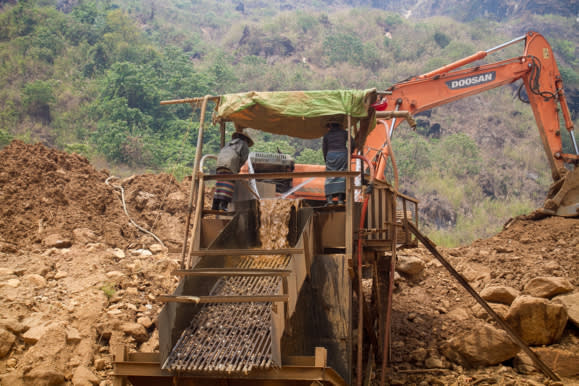 Workers hose down gravel in the hope of finding a gemstone at Daw Taw mine in Mogok. (Photo by Leo Jackson)

He said most of his mines are waiting to renew their permits. "The parliament is trying to fix a new law for gems," he said. "The government wants to set the bar to offer opportunity for all the people."

Most mines focusing on secondary deposits, found in soft rock and sediment, are "finished," he said, which is why "people are looking for the primary source" in hard rocks. "The supply of natural resources has a limitation. The more and more you dig, the deeper the mine goes and the more difficult it gets. This is one of the facts; the supply is getting less," he said.

Outside the mouth of Daw Taw, a primary mine run by the Ruby Dragon Group conglomerate, miner Han Wai Soe held a water bottle labeled with the 800th anniversary logo. Near him a digger loaded gravel onto a large conveyor belt hosed down by two workers searching for gems.

"What we can do right now is wash the soil out but not touch the rock," he said, adding that the mine is waiting to renew its permit. "We took out 200 tons of soil and out of that we got 2,000 carats of ruby."

For 18 months, his team has tunneled 250 meters horizontally into the mountainside and plans to go another 150 meters, but there have been few major gem finds. "800 years is a long time," he said. "The mines are running low."

But interest in visiting the town is running high -- and has been for years. Many believe the 800th anniversary is a signal that finally Mogok is ready to share its unique heritage with the world.