KAWTHAUNG, Myanmar -- A few hours boat ride from the port of Kawthaung, a school of dolphins nudged up to our 30-meter wooden junk. As the captain cut the engine, their silver backs heaved in and out of view; all else was still. Behind us, the Tanintharyi coastline -- Myanmar's skinny southern tail, fringing the Andaman Sea -- had receded to a cut-out scene of blue hills.

Around us were islands topped with primordial rainforest and ringed with empty, white-sand beaches, limestone cliffs and mangrove thickets. Small wooden boats bobbed in sheltered bays, their crews snoozing until nightfall, when squid trapping would begin. Sea eagles careened high above. There was not a beep or a rumble from the mobile phones aboard the junk.

We were off the grid in Myanmar's Myeik Archipelago, also known as the Mergui Archipelago -- a chain of around 800 islands, spread over nearly 400km between the far-south ports of Myeik and Kawthaung.

The archipelago has been formally open for business since 1997, but thanks to cumbersome red tape, isolation and erratic investor sentiment it is a seascape largely unblemished by Myanmar's rush to modernize. It is one of the few places in Southeast Asia where visitors can -- for a price -- have whole beaches, or even entire islands, to themselves.

But the archipelago is at a crossroads. Divergent models of tourism are being pursued. Small ecologically focused resorts, aimed mostly at Western travelers, have been launched, but large resorts, replete with casinos and yacht marinas, and aimed at a regional mass market, are also emerging. Companies and conglomerates, mostly Myanmar-based, have wrangled concessions for the most promising islands, though all but a few stand empty, awaiting developers.

Government policies that stress sustainability appear to favor the eco model, as do internationally backed conservation plans for the area. The Tanintharyi Tourism Development Committee, a government-backed group of entrepreneurs led by Serge Pun, a leading Myanmar tycoon, is working on a master plan for sustainable tourism that will include protected areas and other safeguards recommended by the U.K.-based conservation charity Flora & Fauna International.

The United Nations Educational, Scientific and Cultural Organization has declared the Myeik Archipelago's ecological system to be of "outstanding universal value." But beneath the water, it is far from pristine. An FFI biodiversity survey issued this year recorded widespread coral degradation due to dynamite fishing and anchor dragging, and found that large predatory species such as sharks and rays were "notably absent" -- a sign of an ecosystem damaged by overfishing and practices like bottom trawling. However, these threats to biodiversity are not generally attributable to tourism. In fact, some believe responsible tourism could provide part of the answer. One is Bjorn Burchard, a Norwegian who moved to Myanmar in 1993 and has pursued various businesses -- including a tour company called Moby Dick, on whose boat, the MV Sea Gipsy, I visited the archipelago in early May.

Burchard was a pioneer of beach tourism on Koh Samui, Thailand's second biggest tourist island, in the 1980s. Then, he said, the island was a "paradise." He left disillusioned by the hyper-development that had overtaken Samui and many other Thai islands catering to a mass tourism market. In search of unspoiled areas, he began to explore the Myeik Archipelago.

With local business partners, Burchard established the Boulder Bay Eco Resort, which occupies Boulder Island, near the outer reaches of the archipelago. The resort completed its second season this year, running entirely on solar energy, with no air-conditioning, which Burchard claims is unnecessary because of the plentiful sea breezes. The island also hosts marine biologists from Project Manaia, a small Austria-based marine research organization that has created coral nurseries, and the resort's proceeds have been used to bring in local students from Myeik University.

Other resort projects have also tried to project environmental credentials, albeit through more luxury offerings. Wa Ale Island Resort, a newly completed American investment, resulted from a 2015 Myanmar Forestry Department tender for an eco-resort in Lampi Marine National Park, which lies within the archipelago.

Less is known about a boutique resort on Kyun Phila, expected to open next season, starting in November. This falls within the rapidly expanding tourism portfolio of Serge Pun, which also includes Burma Boating, a high-end cruise operator in the archipelago.

According to the Ministry of Hotels and Tourism, only four island resorts are fully licensed, but seven more are going through the application process. The licenses, essential for hosting foreigners, impose requirements that frustrate some eco-minded developers. These include the need for at least 20 rooms, each equipped with flushing toilets (rather than, say, bio toilets designed to convert human waste into gases and manure). To add to confusion, this contradicts more environmentally progressive guidelines from the Ministry of Natural Resources and Environmental Conservation, which must also certify hotel projects.

On top of regulatory requirements, eco resorts in the archipelago have to square daunting start-up costs -- including bringing materials and staff from the mainland -- with relatively small room numbers and the need for boats to ferry small groups of guests. From May to October storms and monsoon rains make visits unappealing or unfeasible.

But they may face a still graver challenge to their business model: a reliance on Western tourists, who have begun to avoid the country after a string of boom years, due largely to international concern over the Rohingya refugee crisis in the country's west. Myanmar Tourism Federation figures show a drop of almost 20% in visitors from North America and Western Europe at Yangon's international airport, where most enter Myanmar, during the high season from November to March, compared with the same period a year earlier.

"Tourism is the most sensitive business. It is the first to feel the impact of any crisis," said May Myat Mon Win, vice chair of the national tourism federation. . 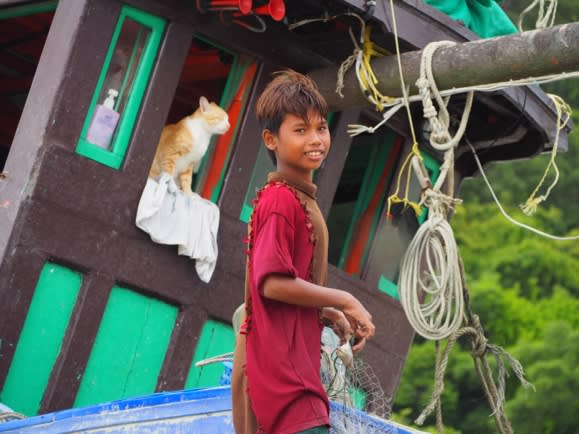 A local boy works on a fishing boat in the archipelago. Overfishing has ​reduced ​ catches for local fishing communities. (Photo by Ben Dunant)

However, the overall fall in Western visitors has been offset by a steady rise in regional arrivals -- notably from China and Thailand, but also from Vietnam, the Philippines and Singapore -- which may prompt investors to bet on very different models of tourism development.

For example, the archipelago's oldest tourist development is also its most grandiose. Located just off the Myanmar and Thai border towns of Kawthaung and Ranong, the 200-room Grand Andaman, formerly called the Andaman Club, has since the 1990s catered largely to Thais seeking legal gambling. A smaller "casino island," called Treasure Island, is also close to Kawthaung.

Both are included in day trips by Thai tourists from Ranong, which have been increasing faster than island stays. The hotels and tourism ministry recorded 43,218 foreign overnight visitors and 15,281 local visitors to Kawthaung and the islands under its administration in 2017, compared with 325,777 day-trippers crossing the marine border. This taste of mass tourism has already affected the local environment. Locals say that snorkelers have seriously damaged the coral reefs around Cocks Comb Island, which is featured on most day trips.

"If we don't have a good plan for tourism, all islands will be damaged in a few years because of the carelessness of visitors," said Zau Lunn, marine program manager for FFI. For example, his organization had been advocating "not to build high rises, with lots of concrete, but to build nature-friendly buildings on the islands."

Even so, the archipelago has been the graveyard of several large tourism projects. On an island called Chin Kait (Burmese for "mosquito bite"), stands the ruin of a resort project begun by Tay Za, one of Myanmar's most prominent military-linked tycoons. Though several bungalows and a jetty were built, it never formally opened.

In 2015, local media reported a $1.2 billion plan by Zochwell Group of Singapore, now renamed Geollion Holdings, to develop Salone Island, near Kawthaung, into a "new Phuket," with luxury hotels, a casino and a bridge to the Myanmar mainland. Since then, little has been heard of the so-called LuxDream Island project, but chief commercial officer Gareth Chin told the Nikkei Asian Review in mid-May that the plan is still alive.

Chin said the company "practically had to start everything from scratch" after a democratically elected government took office in Myanmar in early 2016. He said Tanintharyi Region's chief minister had signed land conversion documents in early May, and forecast approval from Myanmar's Investment Commission by the end of 2018. A $30 million initial phase of construction -- comprising a marina, hotel, and clubhouse -- would then take roughly three years to complete, he said.

As with development elsewhere in Myanmar, the hype about the archipelago outpaces reality. But the rate of resort construction is quickening. For now, eco lodges appear to have the upper hand over developments such as casino islands, but a sustainable tourism policy can only succeed with strong investor backing. Much depends on the outlook for returns. However, in the current tumult enveloping Myanmar's tourism market that is anyone's guess.