NGWE SAUNG, Myanmar -- From a beachside perch next to a group of sunburned Japanese surfers, betelnut seller Let Let Khine studies a reedy figure being swallowed by a meter-high swell. It is the first time she has seen anyone on a surfboard. The surfer, her son Myat Thura Aung, aged 14, could barely swim a year ago; now he is competing in the junior finals of Myanmar's first surfing championship.

"I don't feel worried or anything," said Let Let Khine, 42, who had taken a rare break from her roadside stand, located 1 km away near the resort town of Ngwe Saung on Myanmar's southwest coast, to support her son.

The teenager was one of a dozen local boys slicing through waves on donated surfboards. They are part of the country's nascent surf scene, and the bedrock of a plan to form a national team. With a 1,930 km coastline of mostly deserted beaches, and waves from May to September, Myanmar's surfing potential is undeniable. But poor infrastructure and a recent history of national isolation help to explain why its coastal villages are largely oblivious to the sport.

The latest barrier to the country's fledgling surf culture is the fallout from a brutal conflict 600 km to the north in Rakhine State, which has killed thousands of Rohingya, a Muslim ethnic minority in a largely Buddhist country, and driven some 700,000 to flee to neighboring Bangladesh. On the world stage Myanmar's reputation is disintegrating, and in Ngwe Saung there is a looming sense that the coming dry season will see a precipitous drop in visitors. 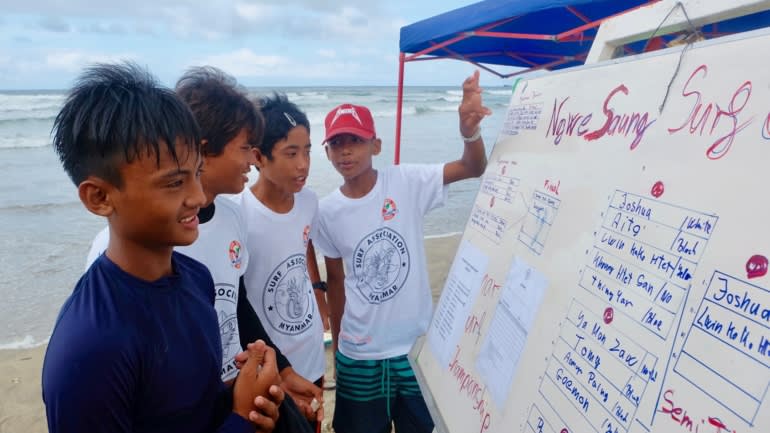 Young surfers check the qualification board during the competition. (Photo by Lorcan Lovett)

"It can change someone's life when you go from being a fisherman's son to a national athlete," he told the Nikkei Asian Review. The son of a prominent Myanmar tycoon, Phone Kyaw Moe Myint set up the Surf Association of Myanmar, which hopes to join the International Surf Association that will allow the country to compete internationally.

Phone Kyaw Moe Myint said Myanmar had a 10% chance of sending a surfing team to the 2019 SEA Games if the Philippines, the host country, succeeds in a bid to include the sport. But his ultimate goal is for Myanmar to participate in the Olympics, which will include the sport for the first time in Tokyo in 2020.

"You never know, we might get lucky and get a universality place, which is like the lottery," he said. "But it's not just the games, it's to show Myanmar has a surf team." Universality places allow national Olympic committees to send a single athlete to compete in some sports if no athlete has qualified under the normal performance standard rules. Surfers from Japan, the U.S., the U.K. and Myanmar took part in the competition on Ngwe Saung beach. (Photo by Lorcan Lovett)

Other surfers who show a commitment to maintaining the surfboards and keeping the beach clean receive water sports and fishing training from the resort's resident instructor, Csiga Balazs, 44, a Hungarian wind surfer, as well as a monthly payment of 15,000 kyats ($9.36) from the Moe Myint family.

This support is significant for many families -- for example, the monthly payment to Myat Thura Aung raises the joint income of Let Let Khine's family, which includes her husband, a carpenter, and another son who is an electrician, to 500,000 kyats.

Other boys' parents work as fishermen, hotel workers, or laborers, like the father of Aung Zaw Lin, 14, a cheery student whose white teeth flash through an indelible grin. Despite practicing for two hours every day after school, he confided on the day before the competition that he would try his best, adding: "But I do not think I will do very well."

Encouraged by Balazs over the last year, the teenager has progressed from the white-water break -- the area nearest the beach where beginners learn to surf -- to the calmer deep blue water, the territory of more experienced surfers, where he bobs on the swell, facing a striped lighthouse on a palm-tree lined shore.

Nearby, a glinting pagoda is set on a lush escarpment above a clump of greenery called Lovers' Island. "In Japan there would be about 100 people on a beach like this, but here there's no one here," said surfer Aito Kasahara, 30, from Tokyo. "You can have a private beach to yourself." 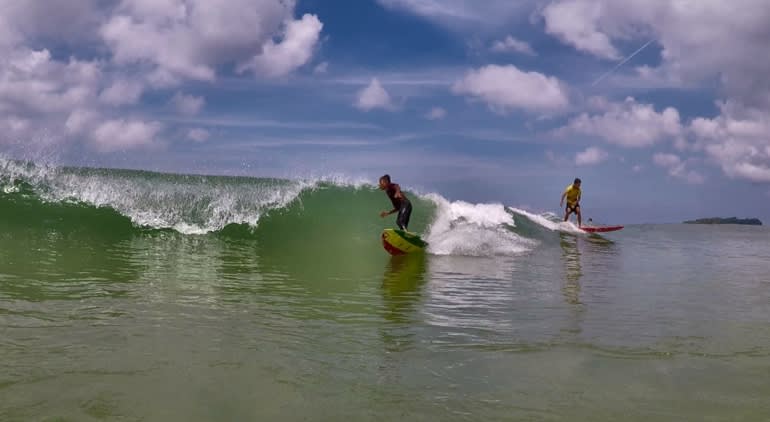 Surfers compete in the open heat at the Myanmar National and Open Surf Competition 2018. (Photo by Csiga Balazs)

Yangon resident Joshua Hughes, 30, a native of Devon, a top U.K. surfing destination, donated seven surfboards to the teenagers after buying them from a sports bar that was going out of business. Though the waves cannot rival Bali's, he said, Ngwe Saung could become "a lot more popular" with traveling surfers.

Balazs, who has worked at the resort for two years, said the break is fit for beginners, and the teenagers are now teaching their friends how to surf. "To rise up a surf nation is very possible," he said. "Myanmar has better potential than [neighboring] Thailand."

Fresh interest in Ngwe Saung is welcome news for local businesses, which are seeing their Western customer numbers shrink. "Europeans are afraid to come because of the violence that [has] happened [in Rakhine]," said Min Thet Ko, 28, front desk manager at the Eskala resort. "We are a bit low [on guests] and the business of the country is not very good," he added.

Ngwe Saung is seeing a slight rise in Asian arrivals, however, and hotels are teaching their employees to speak Mandarin and hiring native Chinese staff, while restaurants are taking bookings from Japan, Thailand, South Korea and China. 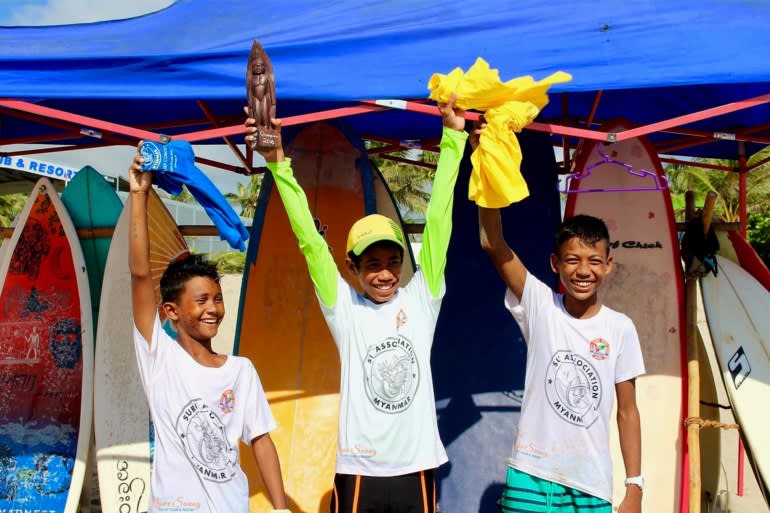 The Golden Myanmar restaurant said it had taken 190 breakfast and lunch bookings for October, mostly from Asian countries, encouraging some local hopes that the tourist flow will hold up. Moe Moe Aye, an 18-year-old waitress, said she did not believe that the Rakhine crisis would affect Ngwe Saung's visitor numbers. "It happened very far away," she said.

Back on the beach, wooden trophies were awarded to the victors, including the junior championship winner, the previously self-doubting Aung Zaw Lin. "I just like the feeling of catching a wave," he said with a smile.

After the ceremony the surfers retreated to the yacht club's dormitories for visiting sailors, where they feasted on grilled fish and pizza. Mya Mya Thein, 53, whose son Lwin Ko Ko Htet is a surfer, stood behind a glass counter displaying curried shrimp infused with the salty air in her small eatery. Wrapped in a shawl, she acknowledged her son's talents in the sea, but confessed to other worries. "He's too interested in sports, so I don't think he'll pass his school exam this year," she said.

Let Let Khine, serving customers at her betelnut stall just beyond the din of the sea, takes a more sanguine view, saying: "Everything is fine as long as Myat Thura Aung is happy." Her son lost in the final, but he continues to wake up before sunrise and cook rice for his family before hitting the waves.