New generation of Sherpas seeks to compete with Western operators KATHMANDU -- As Nepal's 2018 climbing season gets under way, Nepalese companies are stepping up efforts to compete with Western operators helping foreign climbers to scale Mount Everest, the world's highest mountain.

Although it costs at least $20,000 to climb Everest -- and can be as much as $130,000 -- the number of enthusiasts flocking to Nepal is rising, aided in part by a Chinese regulation requiring climbers attempting the peak from the Chinese side of the Himalayas to have previous experience ona mountain of at least 8,000m.

Beijing also imposes strict limits on the number of climbers attempting Everest from Chinese soil, allowing just 22 in 2018. "Every year, more and more Chinese people want to climb Everest, but there's not enough room for them," said Bao Yifei, a Chinese mountain guide leading a team of four Chinese climbers in Nepal this season.

Tourism is Nepal's second biggest source of foreign exchange after remittances, earning $1.9 billion in 2017, equivalent to 7.8% of gross domestic project, according to the London-based World Travel and Tourism Council.

Mountaineering accounts for a significant chunk of the sector, with a record 375 foreign climbers attempting Everest in 2017, according to Nepal's Department of Tourism. The mountain contributes about $13 million a year to tourism income, industry experts say. 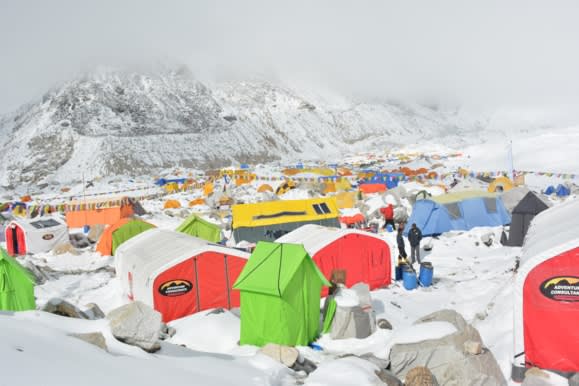 Everest Base Camp turns into a tent city during the popular spring climbing season that runs from April to May. (Photo by Pradeep Bashyal)

Western guiding companies dominate Nepal's climbing business, in part because of historical links between Sherpas -- the indigenous people of the Nepalese Himalayan region -- and European climbers, who began trying to conquer Everest in the 1920s. But a growing number of young and well-educated Sherpas are seeking a bigger share of the Everest pie than the fees they can earn from Western companies for working as guides and porters.

Temba Tsheri Sherpa, 32, became the youngest climber to scale Everest at 16, although his record was later broken by a 14-year-old American. After studying Chinese at China's Wuhan University, he returned to Nepal in 2010 and co-founded Dreamers Destination, another climbing company, in Kathmandu.

"Sherpas have been the pillars of the Everest industry. We do all the hard work. So I wanted to run my own guiding company instead of working as an employee of a Westerner," said Temba Tsheri Sherpa, who left Dreamers Destination in 2015 to run his own company.

About two dozen Nepalese guiding companies are now competing on Everest with a similar number of Western companies, mostly based in the U.S., Europe and New Zealand. However, most of Nepal's 1,500 registered guiding companies operate only on smaller mountains.

Local operators typically charge from $20,000 to $50,000 for guided expeditions on Everest, while Western companies -- such as Adventure Consultants, Alpine Ascents International, RMI Expeditions, International Mountain Guide, Jagged Globe, Madison Mountaineering and Alpineglow Expedition -- charge between $35,000 and $75,000, rising to $115,000 for climbers who want a Western guide. 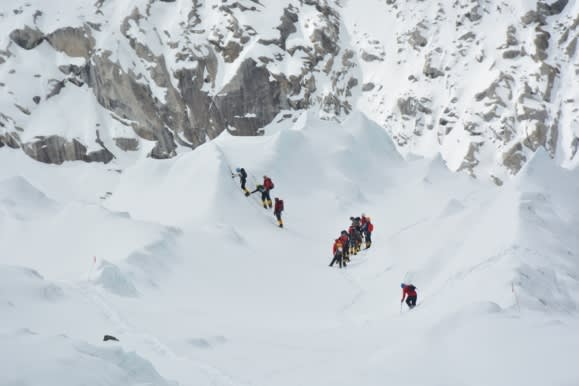 Climbers practice for their ascent with Sherpa guides at Everest Base Camp. (Photo by Pradeep Bashyal)

Seven Summits Trek, founded in 2010 by four Sherpa brothers from the Makalu region, east of Everest, works both at the high and low ends of the business. Its $20,000 package includes an $11,000 permit fee and base camp services, according to Tashi Sherpa, managing director.

This season, Seven Summits has also launched a $130,000 "VVIP Everest Expedition Service" that offers five guides, including rescue and medical specialists, a break in a five-star Kathmandu hotel in the middle of the expedition, and helicopter rides over parts of the trek to Everest base camp. VVIP stands for Very Very Important Person.

Tashi Sherpa said local operators were well-placed to serve climbers because of their knowledge of the mountain. "We have good human resources. We know who is capable of doing what on the mountain," he said.

However, Western guiding companies claimed that they continue to have a competitive edge in the most important areas for climbers -- safety and the likelihood of reaching the peak.

"I have the best safety and success record because I utilize the best mountain guides, Sherpas, and have a well thought-out and conservative climbing strategy, with unparalleled resources," said Garret Madison, a veteran guide from Seattle who owns Madison Mountaineering.

Madison, who has reached the peak eight times, leading a total of 52 climbers, said climbers should be aware that companies offering lower rates could be cutting corners. "Some operators will take anyone's money regardless of their level of qualification, and then turn them loose on the mountain without professional supervision," he said.

Madison said two of his employees -- an American guide and a Sherpa guide -- had brought a foreign climber down from the mountain last year after he had become unwell while climbing under the guidance of a local company. He said the climber later died.

In May 2017 a Pakistani climber alleged that Seven Summits Trek failed to supply enough oxygen for his expedition and provided him with an inexperienced guide, despite charging a fee of $32,000. Tashi Sherpa denied the allegation, saying the company had supplied sufficient oxygen and the guide was qualified.

Sumit Joshi, a Nepalese mountain guide and expedition organizer based in Sydney, said that some irresponsible companies are operating on the mountain. "There are good and bad local and foreign guiding companies," said Joshi, who started as a trekking guide in 1995. He is the founder of Himalayan Ascent, which charges between $30,000 and $40,000 for a guided expedition on Everest.

Joshi said the industry's biggest challenge was companies that undercut prices. "Operators themselves will realize at some point that it's not going to be sustainable," he said. "Prices cannot be regulated because it's a private sector." He said the government should limit the number of climbers each season.

"Companies [could] apply for quotas and people [could] buy slots from them," he said. "There also has to be some sort of screening of climbers," he said, claiming that a Nepalese regulation requiring Everest climbers to have experience on another peak of at last 6,000m "hasn't been strictly enforced." Joshi also called for stricter regulation ofmountain guides.

"It's going to be hard for us operators, but it will be a best solution to overcrowding and a lack of safety on Everest," Joshi said.